In late-2013, Asia-Pacific security watchers wrangled with what China’s then newly declared unilateral air defense identification zone (ADIZ) over the East China Sea would mean in practice for civil aviation in the region. Two powerful status quo states – the United States and Japan – immediately refused to recognize the ADIZ and reacted accordingly: The United States flew unarmed bombers through the airspace and Japan instructed its civilian aviators not to comply with the new Chinese requirements. Of course, the ADIZ was never going to immediately hurt the material interests of Japanese and American aviation – for these states, the Chinese ADIZ was more a signal of Beijing’s growing intent to revise the status quo in its near seas than anything. The states that would suffer, as is almost always the case in international affairs, would be the smaller and weaker ones.

A little-noticed report published earlier this week in Air Transport World showcases one such case. Although considerably ambiguity continues to surround this incident, according to that report, a Lao Airlines flight flying from South Korea’s Gimehae International Airport to Laos was asked to turn back by Chinese air traffic controllers and complied. The report notes that the Chinese air traffic controllers told the aircraft that it did not have adequate approval to pass through China’s airspace. According to the report, the flight (No. QV916), an Airbus A320, was an hour into its scheduled flight path, “which would have put the aircraft over disputed areas of the China Sea,” before it turned back. Starting last year, Chinese air traffic authorities began to require that all civilian flights flying through the East China Sea ADIZ file pre-flight plans, transponder details, and other technical details ahead of their flights, according to the Air Transport World report. The incident involving QV916 is the first instance of a commercial flight being turned back due to a failure to comply with Chinese air traffic authority requirements, but at least 55 airlines worldwide are complying with the terms of China’s ADIZ. 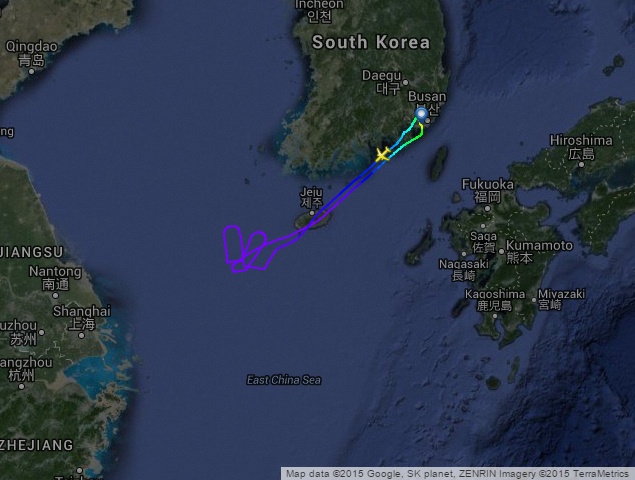 The Laotian government has not reacted publicly to the incident involving Lao Airlines flight QV916, and it is unlikely to do so for fear of risking its mostly positive rapport and growing economic ties with China. The Association of Southeast Asian Nations (ASEAN), however, should avail itself of the opportunity to emphasize its support for the freedom of overflight over the high seas. In a statement last year, signed jointly with Japan, ASEAN pledged its support for “the freedom of overflight and civil aviation safety in accordance with the universally recognised principles of international law, including the 1982 UNCLOS, and the relevant standards and recommended practices by the International Civil Aviation Organisation (ICAO).” The United States and Japan submitted a letter early last year to ICAO, a specialized UN agency, asking the group to repudiate China’s ADIZ.

Whether regional states, including the United States and Japan, like it or not, the compliance of this civilian flight with the requirements of Chinese air traffic controllers could be a sign of things to come. For China, the ADIZ was a way of creating facts in the air, and bolstering its claim to a disputed swathe of airspace. More importantly, an ADIZ was a particularly clever tool to do so given that the right to establish an ADIZ is not bestowed or restricted by any particular piece of international law. Until November 2013, however, it was customary for states to avoid declaring ADIZs over disputed territory. For China, successfully administering ADIZ rules is a coup for its sovereignty claims in the East China Sea. As one well-known international court opinion noted:

…a claim to sovereignty based not upon some particular act or title such as a treaty of cession but merely upon continued display of authority, involves two elements each of which must be shown to exist: the intention and will to act as sovereign, and some actual exercise or display of such authority.

However unnoticed and seemingly insignificant the decision of QV916 to turn back around and fly back to South Korea, it has helped China fulfill the two requirements stated in that opinion in the East China Sea with its air defense identification zone. Statements of opposition to the Chinese ADIZ by the United States, the European Union, Japan, South Korea, Australia and ASEAN will matter less and less if, in practice, China continues to enforce its terms and civilian aviators begin complying.

Update: Since this piece was published, the Chinese government, specifically a spokesperson for the Ministry of Defense, issued the following statement on the QV916 incident, answering a reporter’s question.

We got to know from China’s civil aviation authorities that the flight route of the commercial flight No.916 of the Laos Airlines will be crossing the airspace over the Chinese territory.

On the morning of July 25, without getting authorization on the flight plan and route from the Chinese authorities, the flight took off and intended to fly over the Chinese territorial airspace. The Chinese air traffic control authorities rejected the flight from entering China’s territorial airspace according to relevant rules and working procedures. This event has no connection with the Air Defense Identification Zone (ADIZ) in the East China Sea. If you want to know further information, I suggest you refer to the Civil Aviation Administration of China.

Japan says the incursion is the 31st in the East China Sea this year.

Is China escalating in the East China Sea, or tipping its hand?

Previously, China had only sent its coast guard into Japan's territorial sea and contiguous zone.