Three times in the past week Uzbekistan’s border security units have fired their weapons at the country’s neighbors. On Sunday, a Kazakh was shot on the Syr Darya and Monday, Kyrgyz and Uzbek border guards exchanged fire. Last Thursday, Uzbek guards fired on a pair of Tajiks crossing the border. What’s going on? Are the Uzbeks suddenly trigger-happy? Not quite.

Central Asia’s borders—like many around the world—are the result of politics as much as geography. The transformation of the region from a variety of khanates with indistinct borders and nomadic hordes into states with rigid borders began under the influence of Imperial Russia, the Bolshevik Revolution, and the Soviet Union. The borders that exist today came into being during the 1930s and the Fergana valley serves as the region’s fertile core, a conduit, and a tinderbox (as I discuss in the July issue of The Diplomat Magazine). 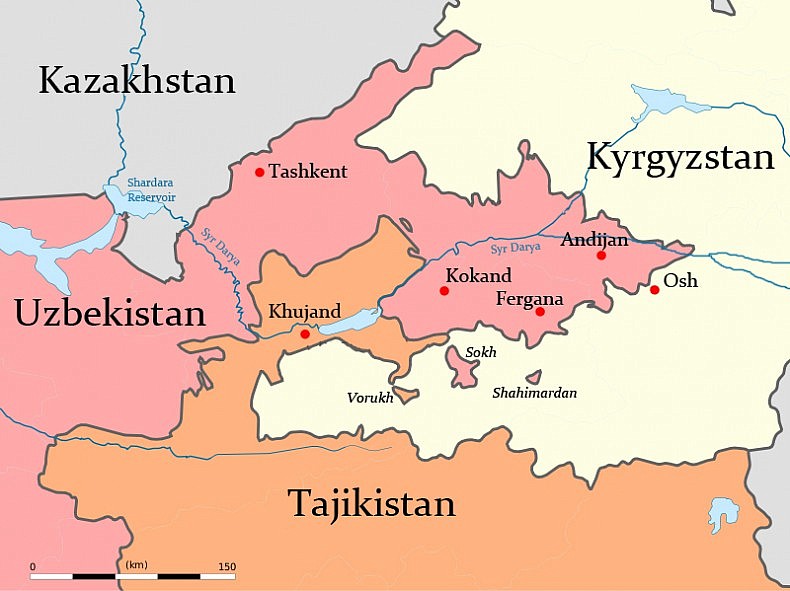 The incident last Thursday, according to Fergana News, occurred when two Tajiks “attempted to cross the Uzbek-Tajik border near the town of Andarkhan in Besharyk District.” Besharyk is the westernmost district in Uzbekistan’s Fergana Region, its main city, also called Besharyk, about 20 miles southwest of Kokand. One man was shot, though not apparently killed, and the other detained. Few other details are readily available.

As for what happened at the Uzbek-Kazakh border, Tengrinews reported that two Kazakh men were fishing in the middle of Syr Darya when Uzbek border guards fired on them. The Uzbeks say the men were illegally crossing the border. Kazakhstan has sent a note to Uzbekistan protesting the incident. The Syr Darya doesn’t really serve as border between the two—except near the Shardara Reservoir in the Southern Kazakhstan Region near Uzbekistan’s fertile cotton core.

According to Fergana News (citing 365info.kz), the surviving Kazakh said of the incident:

We were floating from the Kazakh border side. Then a sign to stop was unexpectedly shown from the Uzbek side. My partner did not stop. That is when the shooting started. He fell onto [the bottom of] the boat, and I first thought he was hiding. But having taken a better look, I realised he was wounded. I threw myself into the water and swam to the Kazakh bank.

Exactly what occurred Monday night near Shahimardan, an Uzbek exclave surrounded by Kyrgyz territory in the Fergana valley, is disputed. The Uzbek border service, according to UzDaily, claims a drunk Kyrgyz border guard “fired from submachine gun towards control-permission point of Uzbekistan, located at Mashalang settlement Shahimardan.”

The Kyrgyz border services, however, say the Uzbek account “does not reflect reality.” According to the Kyrgyz, its border unit demanded that an Uzbek patrol respect the border and “carry out patrol at a certain distance from the state border,” then the Kyrgyz say, “the Uzbek border detachment opened fire on the Kyrgyz servicemen.”

These types of border incidents happen with semi-regular frequency in the region. In May, an Uzbek border guard killed a Kyrgyz man smuggling potatoes from Sokh district, a mostly ethnic Tajik exclave belonging to Uzbekistan. Sokh, like Shahimardan, is in Kyrgyzstan’s Batken region at the edge of the Fergana valley.

This continued tension–flaring up seemingly at random–between Uzbekistan and its neighbors is a huge contributing factor to why Central Asia is one of the least economically integrated regions in the world. Western officials often cite border security alongside terrorism as areas of concern regionally, and opportunities for cooperation. Between 2003 and 2014 the EU funded a UNPD program–the Border Management Programme in Central Asia (BOMCA)–to the tune of €33 million to provide technical assistance and training to Central Asia’s border patrols. The program constructed 52 crossing points, six training centers, 4 dog-training centers, and claims to have trained 2500 border security and customs officers. The efforts clearly haven’t stopped random border incidents, nor do they seem to have stemmed the booming narcotics trade that uses the Fergana valley like a highway to transport drugs from Afghanistan, which produces 90 percent of the world’s opium, northward.

The Implications of FTX’s Collapse for North Korea

For a regime that has become as dependent on crypto to avoid sanctions and steal hard currency, FTX’s collapse couldn’t be more ill-timed.