Chinese President Xi Jinping is set to arrive in the United States on a historic state visit at a time of high tensions between the two countries. The first half of this year saw tensions rise as the U.S. protested China’s brazen island-building in the South China Sea. Matters got worse with when the U.S. Office of Personnel Management (OPM), a federal agency, reported a breach on an unprecedented scale, which several U.S. government officials and legislators alleged had been orchestrated by Chinese agents. Finally, in recent days, we’ve seen murmurs that Washington could put a new executive order to work, imposing sanctions on Beijing for its cyber espionage activity.

Beyond the declining government-to-government situation, public perceptions of China continue to be poor in the United States. Pew Research has released the results of a new survey, conducted between April and May this year, showcasing how Americans perceive various threats from China. The results reveal quite a bit about where public attitudes in the United States are heading with regard to China. Overall, little has changed in terms of how favorable Americans find China year-on-year–China’s favorability actually saw a slight increase, from 35 percent in 2014 to 38 percent in 2015. Meanwhile, unfavorability declined from 55 percent to 54 percent over the same period. According to Pew’s historical survey data, Americans saw China more unfavorably than favorably for the first time since 2008 in 2013, the first full year Chinese President Xi Jinping led the country. 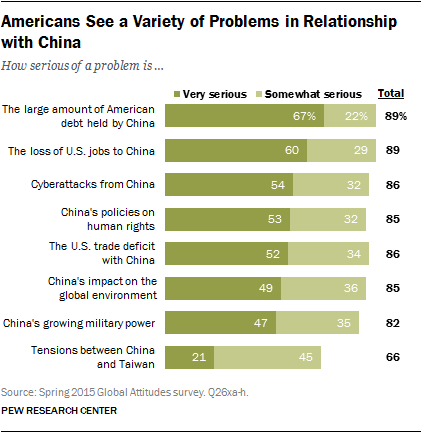 The partisan findings are of particular interest given that U.S. presidential campaigns are well underway, with several candidates, primarily from the GOP, eagerly evoking China as a bogeyman for U.S. interests and national security. Pew’s findings suggest that these candidates are playing to very real fears. Among Americans, Republicans are more likely to be concerned about China than Democrats. The only issue where Democrats show more concern than Republicans is regarding “China’s impact on the global environment.” Republican candidates will largely continue to use outsized rhetoric on China to play to American concerns about the country. With intensified rhetoric and a decline in government-to-government relations, the next U.S. administration may inherit a considerably rockier U.S.-China relationship. As the Center for Strategic and International Studies’ Bonnie Glaser recently noted, “fasten your seat belts and get ready for a rough ride in U.S.-China relations beginning in 2017.”

What’s concerning about the findings is that a major myth, namely that China “owns” the United States because it holds massive amounts of U.S. debt, is at the top of what Americans perceive as troubling about the U.S.-China relationship. In fact, most U.S. public debt is held by U.S. entities and individuals. China has at times held nearly 10 percent of the total U.S. debt, which stands at around $17.5 trillion or 103 percent of U.S. GDP as of this year, but that doesn’t mean Beijing has any real leverage over the fiscal health of the U.S. government. According to the U.S. Department of the Treasury, as of June 2015, the top holders of U.S. debt are China, Japan, “Caribbean Banking Centers,” and oil exporting states. China and Japan hold nearly the same amount of U.S. debt in absolute terms, but there is little doom and gloom regarding Japan’s stakes. Regardless of the facts, Americans continue to see China’s ownership of U.S. national debt as a problem. What’s worse, in 2014, 78 percent of respondents told Pew they saw the debt issue as their top concern. The 2015 results show that now 89 percent of respondents cite the issue as their top concern about China. Instead of declining, this misperception has intensified among Americans.

By the same token, it’s notable that where every other issue polled by Pew has nearly 50 percent or more Americans citing a “very serious” concern, “tensions between China and Taiwan” only very seriously concern 21 percent of Americans. This is despite the Chinese People’s Liberation Army continuing to see a conflict across the Taiwan strait as its most likely war-fighting scenario. This perception will be of concern to leaders in Taipei. Indeed, many in Taiwan are already aware of the island’s fading relevance in U.S. policy circles as the U.S.-China relationship matures and extends into domains that were smaller concerns during the early-2000s and 1990s, when Taiwan figured more prominently in U.S. strategic thinking toward Asia.

Beyond the skewed perceptions of the Taiwan question and China’s U.S. debt stakes, the Pew survey makes it clear that most Americans aren’t concerned about a number of issues that regular readers of The Diplomat may see as a concern. Namely, freedom of navigation in the South China Sea, China’s dispute with Japan over the Senkaku/Diaoyu Islands, and China’s fast modernizing military, including its recently paraded fleet of ballistic missiles and rapidly expanding navy. To be fair, in the Pew survey, 47 percent of Americans cite “China’s growing military power” as a “very serious” problem, but this the penultimate issue they’re worried about (with Taiwan dead last).

Finally, one wonders how the results of this survey–which was conducted in late-April and early-May this year–would differ if Americans were surveyed today. With the prominence of the OPM breach and recent turbulence in the Chinese stock market, perhaps respondents would cite cyber espionage and the stability of China’s own market as greater concerns. The latter in particular seems to be of grave concern to some Americans–GOP presidential candidate Scott Walker went as far as to call on the Obama administration to cancel Xi’s state visit, in part due to China’s “continued state interference in its economy.”

When Xi lands in Washington, he’ll be in for a historic state visit, but it’s unmistakable that perceptions of China in the United States, at the government and at the public opinion level, are quickly getting worse. Both countries ought to ask themselves if this is simply the natural progression of their relationship as China rises and competition between the two powers intensifies, or if perceptions can be improved through diplomacy and communication. Obama and Xi will have a chance to engage in the latter soon. We’ll have to wait and see if they’ll be able to give the American public some reason to be optimistic about U.S.-China relations.

The U.S. has told China that it’ll treat its coast guard and “maritime militia” as naval vessels, in effect.

Here's wishing the Asia-Pacific a happy and prosperous new year. Watch these issues in the coming year.