In August 2015, the Pentagon finally announced the winner of a bid to replace the U.S. military’s old workhorse, the Humvee. The replacement is envisioned as a light but more technologically advanced all-purpose vehicle that will make America’s ground forces more agile and — more importantly —  safer in hostile environments.

The winner of the bid, the U.S. defense contractor Oshkosh Defense, was awarded a $6.7 billion contract to build the new so-called Joint Light Tactical Vehicles (JLTV) for the U.S. Army and U.S. Marine Corps. The U.S. Army plans to purchase more than 50,000 JLTVs before 2040, whereas the U.S. Marine Corps is slated to receive 5,500 vehicles. The total program cost is estimated at around $30 billion dollars.

The new JLTV is a hybrid between the small and unarmored Humvee and the larger, heavily armored Mine-Resistant Ambush Protected Vehicles (MRAP), 24,000 of which were built for the Afghanistan and Iraq Wars once it became clear that the Humvee offered little protection from roadside bombs. The MRAP, however, was too bulky and too heavy to fit into the U.S military’s future ground warfare concept and was always thought to be an interim solution by the Pentagon. 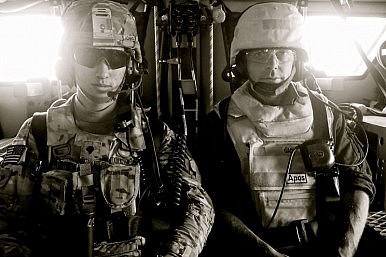 The author (right) in a MRAP in Paktia Province, Afghanistan in July 2013.

The new JLTV purportedly now offers the speed and agility of the Humvee and the protection and off-road mobility of a MRAP. John Bryant, senior vice-president for defense programs at Oshkosh told Breaking Defense: “In our [JLTV design] we achieve those same [MRAP] levels of protection and mobility through… systems engineering.”

Our JLTV has been extensively tested and is proven to provide the ballistic protection of a light tank, the underbody protection of an MRAP-class vehicle, and the off-road mobility of a Baja racer. The Oshkosh JLTV allows troops to travel over rugged terrain at speeds 70% faster than today’s gold standard, which is our Oshkosh M-ATV. Looking to future battlefields, we know that our troops will face a myriad of threats. Soldiers and Marines can be assured that the highly capable Oshkosh JLTV will perform the mission.

The JLTV can also be configured to be equipped with remote-controlled weapon systems and could be driven via remote-controls during particularly dangerous missions, Oshkosh claims. Unlike the MRAP, it is also light enough to be airlifted by a CH-47 Chinook helicopter.

Oshkosh will start delivery of the first JLTVs in approximately ten months, according to a company press release. AFP, however, notes that Oshkosh’s competitors in the bid for the contract, Lockheed Martin and AM General, may file protests over the Pentagon’s decision to go with Oshkosh, which might push back the delivery date.

The plan will cut tanks and other traditional weapons to make room for new anti-ship missions.