Artificial Intelligence for the Indo-Pacific: A Blueprint for 2030

Can COVID-19’s Impact on Democracy in Southeast Asia be Reversed?

Uzbekistan: The Long Struggle for Freedom of Expression

To Fight the Next Pandemic, the World Needs Chinese Activists

Luc Forsyth and Gareth Bright are on a journey to follow the Mekong River from sea to source, fully immersing themselves in the adventure of exploring one of the world’s most famous rivers. From their base in Phnom Penh, the pair of photojournalists are taking extended trips along the river and will eventually explore its full length. Using a mix of photography, videography and text A River’s Tail is a truly multimedia experience.

Forsyth and Bright found a great partner in Lien Aid, an international non-profit committed to connecting Asia’s rural poor to sustainable clean water and sanitation resources, which is sponsoring their project but otherwise letting them wander, telling the stories of the people along the river. The Diplomat spoke recently to Forsyth about how the project began and why the Mekong is such a fascinating and important subject.

Over the coming months The Diplomat will feature some of the stories Forsyth and Bright have found as they work up the river–keeping in mind that each little piece represents another chapter in the river’s tale. For the most part, text and color photographs are by Forsyth and black and white photographs are from Bright. Videography is by Pablo Chavanel.

Your plan is to travel the Mekong river from sea to source, why make such a long journey?

I think for us the length of the journey is what makes it so appealing. From a purely experience-based viewpoint, traveling the entire length of one of the most famous rivers in the world is an attractive proposition from a personal standpoint, not just as a photographer or documentarian.

From a professional perspective, a long journey is an excuse to travel for extended periods exploring whatever interesting people or tangentially related subject matter we happen to stumble on. I think increasingly typical media assignments centre around a very focused topic, and combined with the limited time frames freelancers usually have to go out and come back with images it can often feel like a shallow experience. It is almost like you approach a topic with blinders on, and hone in on only the elements of the story that are essential to the assignment you’ve been given at the expense of whatever else is happening on the periphery. With a journey-based narrative like this, we don’t really know what we are going to find on any given day, and are free to follow up whatever we think is interesting.

We’ve been very lucky in our partnership with Lien Aid in that we have been given a huge amount of freedom to include whatever we see fit into the project. Basically this project is the antithesis to the modern newspaper assignment, where the sheer open-endedness and scope of the trip becomes part of the story itself. 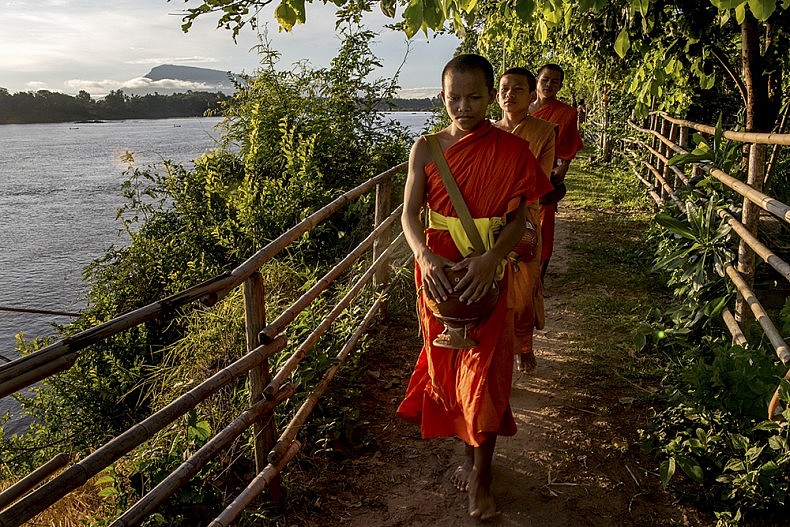 Young Novice Monks beg for alms in the early morning light on a small jungle path that runs alongside the Mekong River on a small island near Pakse, Laos. Photo by Luc Forsyth.

Why chose the Mekong for such a project?

Really the Mekong chose us, as cliche of a statement as that might sound. About a year ago Gareth and I decided to take a break from normal assignment work and self drive a small wooden fishing boat up Cambodia’s Tonle Sap river and into the Tonle Sap lake. There wasn’t a great deal of planning that went into it; we basically wanted a boyish adventure, and since we lived in Phnom Penh which is located at the confluence of the Mekong and Tonle Sap rivers, it was an easily accessible waterway for us.

It took a few days to find a boat, and we went out on a handful of practice drives before leaving, but it wasn’t a conscious decision to start a year-long project. When the first trip was over (it lasted about 3 weeks), we actually thought that would be the end of it.

As fate and the magic of the Internet would have it, however, the short blog post we put together about our experience was seen by the right people. I woke up one morning while on a job in Nepal, not thinking about the river or our boat at all, to an email from Lien Aid asking if we would be willing to expand our trip to cover more of the Mekong.

At first we were cautious in our response, not wanting to get our hopes up, but over the course of a few months, we realized Lien Aid was serious about funding this huge project and went from there. 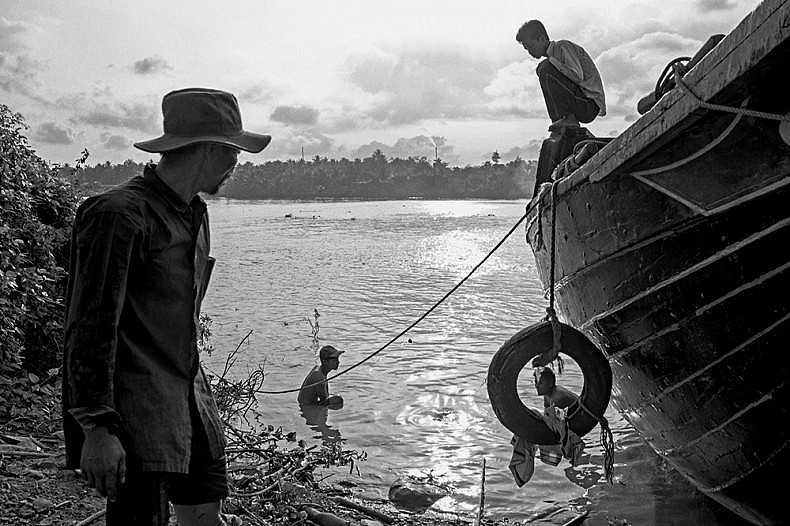 A worker sumberges himself in the Mekong before a team attempts to salvage a piece of submerged lumber. The family owned shipyard is one of seven major boat repair facilities serving the Mekong transport vessels outside the city of Ben Tre, Vietnam photo by Gareth Bright.

Some of the stories you’ll tell focus on very small facets of life along the river, shrimp and coconuts, do you see these as pieces of a larger story?

In short, yes. I don’t think there is one issue that dominates the Mekong river over all else, excepting the fact that all the issues generally revolve around or have been directly caused by human activity.

The Mekong is one of the most biologically and ecologically diverse river systems in the world, and so I think it’s natural to tell its story in terms of small parts which contribute to a greater whole. Also, as the project progresses, we are finding that many of these smaller stories are actually very interconnected with each other. For example, the shrimp fishing story you mentioned: several weeks later we did a story on rice farming and realized that Vietnamese farmers were dumping a huge amount of agro chemicals into the water network, and that was making its way back down river to the shrimp farmers.

Like most things in nature, everything along this river is connected, and the small stories we tell are no different. 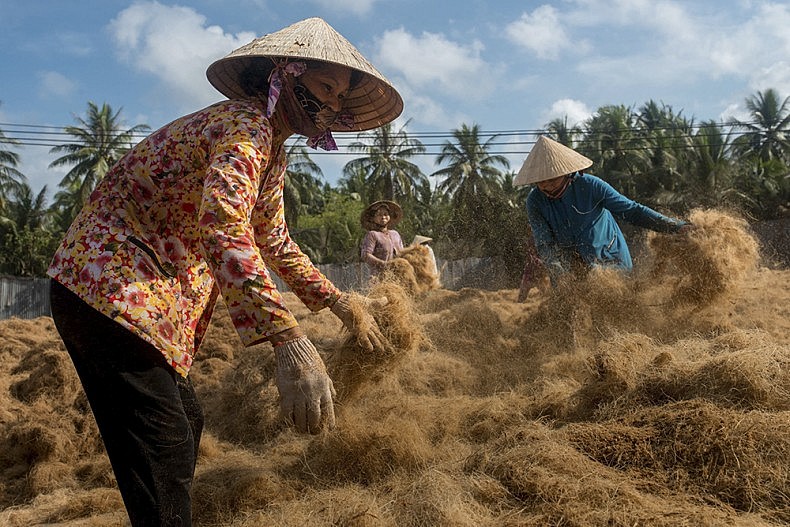 Workers separate coconut husk fibres andleave the to dry in the sun. The ground husks will be used for a variety of purposes such as a low cost plant mulch and soundproofing material. Coconut Island, Ben Tre, Vietnam photo by Luc Forsyth.

What do you expect to be the most challenging parts of the trip?

Logistics, both in the pre and post-production stages, are definitely the most difficult. The actual taking of pictures is the enjoyable part; it’s getting to the right location at the right time that is uncertain. We can do all the planning in the world, but if a translator doesn’t show up to meet us, or if a road has been washed away in a mudslide, everything goes out the window.

I think many people think that spending a lot of time on the road is hard, which it is in its own way, but for me is the easiest part of this work. I think to even want to get involved in this field in the first place you need to be the kind of person who is okay with rough travel, and for us that’s the good part.

It’s when you have to spend 10 hours a day in front of a computer writing emails to arrange a translator, or pouring over a map to try and plot a logical path that things get mentally exhausting. In the end we want this project to be seen so that people know about the challenges facing the Mekong region moving into the future, so marketing and distributing takes up an unbelievable amount of time.

I’d say for every hour of picture making we do, we spend 5-6 hours in front of a computer editing, writing, planning, and distributing. Walking in the jungle for 5 hours is, to me, much less exhausting than trying to figure out the most effective times to schedule Facebook posts. 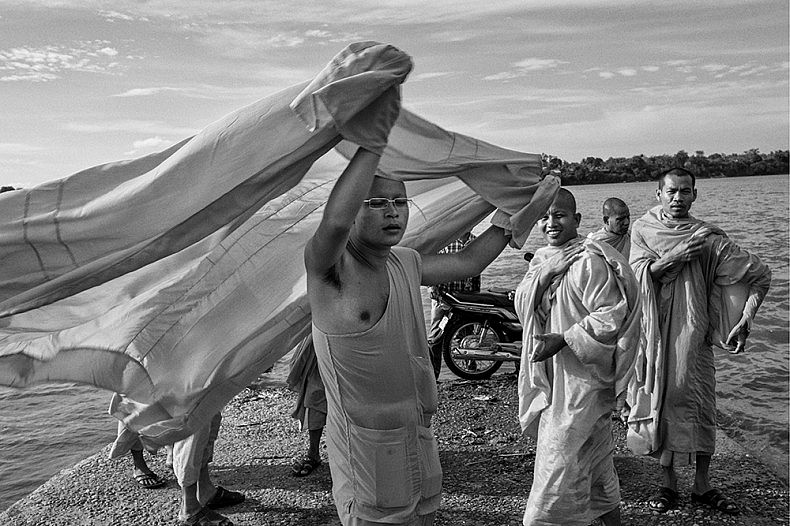 Monks walk along a pier extending into the Sekong river in the city of Steung Treng. The Sekong is a major tributary of the Mekong and will be heavily affected by the Sesan II dam. photo by Gareth Bright.

What has been the reception of people along the river to you traveling through?

People have been wonderful and utterly approachable. I’m struggling to think of a single time when we were denied anything really. The readiness of people in Southeast Asia to welcome you into their lives is something that never ceases to amaze me. I often try and imagine how my friends or family at home in Canada would react if a stranger who didn’t speak their language asked to take photos of them in their living room or at work, and I can’t imagine any of them saying yes. Yet the people we’ve met along the way usually offer us tea and a chair before asking as single question about who we are or what we want. That’s amazing to me. 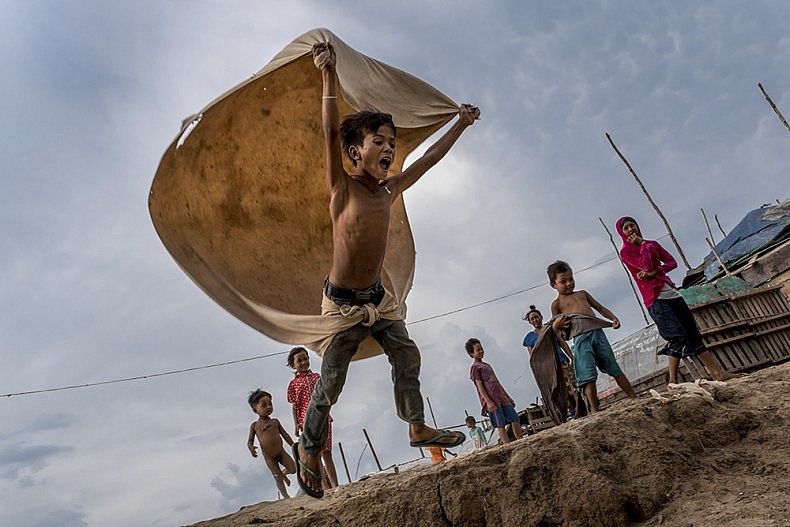 In the coming months The Diplomat will be sharing some of the stories Forsyth and Bright found chasing the river’s tail.

China and the Coming Biden Presidency

"It’s not a matter of whether or not the existing power structures start to give way: it’s just a question of when."

What’s Next for Kyrgyzstan?

Can India Decouple From China?

The State of Democracy in Asia

The country exceeded 500,000 cases right as international researchers were moving closer to an effective vaccine.

With more than 200 newly confirmed cases per day recently, Seoul has strengthened social distancing yet again.

Recovery from the pandemic and its economic effects has become an arena for strategic competition in Southeast Asia.

5 Hidden Costs of the RCEP to People and Planet

Trade negotiators are meeting next week in South Korea to discuss the RCEP, which could impact billions of lives.

Can ASEAN Play a Greater Role in the Mekong Subregion?

ASEAN should aim to be “central” in the Mekong subregion too.

The Xayaburi Dam poses a problem for the Mekong River’s fish and the people living beside it.

Are regional tensions over the Xayaburi Dam coming to a head?

Artificial Intelligence for the Indo-Pacific: A Blueprint for 2030

Three AI-related technologies that could further the free, open, resilient, and inclusive character of the Indo-Pacific.

Can COVID-19’s Impact on Democracy in Southeast Asia be Reversed?

As authoritarian leaders in many Southeast Asian countries use the pandemic to consolidate their hold, what needs to be done to buck the trend?

Even amid the current tensions, the state of the relationship is more complex than headlines would suggest.

Uyghur scholar Rahile Dawut, missing since 2017, was awarded the 2020 Scholars at Risk “Courage to Think” award.

Will a Biden administration renew attention on Southeast Asia?

In the long run, the regulation of Ant Group will contribute to a more stable – and thus more favorable – business environment in China.

China and the Coming Biden Presidency

How will U.S. President-elect Joe Biden manage the U.S.-China relationship?

China’s new focus on testing packaging comes amid a media push to claim that frozen food imports brought the virus to Wuhan in the first place.

Pakistan’s Movie Industry is Being Remade

US Destroyer Conducts FONOP Against Russian Claims in Sea of Japan

The Russian Navy claims that it expelled USS John S. McCain from Peter the Great Bay.

The trials of the 129 defendants, many of them former members of a banned opposition party, could drag on for months.