In December 2015, China’s People’s Liberation Army (PLA) established its Army, part of the sweeping military reforms President Xi Jinping has hinted since taking office but revealed only over the past several months. The chart below is my prediction of what this organization will look like.

An Army Establishing an Army?

The PLA encompasses the whole of China’s armed forces on land, sea, air, and beyond. It is now establishing a dedicated staff, called the “Army Leading Organ,” to field its ground force component. Of course the PLA has always had a ground force. It began as such, although the Chinese word for “Army” in PLA is perfectly appropriate for a joint force. The ground force offices were scattered throughout the PLA’s high command, most obviously within the former General Staff Department. These offices have now been moved to the Army staff, including the Army Aviation Department and the offices responsible for armor, artillery, engineering, and chemical defense (See: The PLA as Organization). 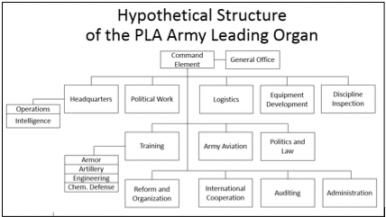 Adding an Army staff alongside its Navy, Air Force, and other headquarters brings the PLA into alignment with militaries worldwide. Note however that the Army and other staffs are not responsible for commanding forces, but rather for organizing, training, and equipping forces for employment within the five new joint Theater Commands, similar to the division of responsibilities between the U.S. service staffs and Unified Combatant Commands.

The Army Leading Organ’s task is thus to build the best possible ground force to deter or defeat threats to China’s interests. General Li Zuocheng, former commander of the Chengdu Military Region, is its commanding officer. But besides the offices mentioned above, what will his staff look like? There is little official information or outside commentary to answer that question, although an understanding of the bureaucratic structure can give us some idea.

Under the former system, each office or unit contained within it offices corresponding to – and with a requirement to report to – the PLA’s four top-level general departments: the General Staff, Political, Logistics, and Armaments Departments. Now that these have been reduced in scope and joined by 11 other independent departments (mostly taken from within the General Departments), it stands to reason that the Army and other subordinate units will wherever possible organize along these lines as well.

Without the old general departments to report to, the newly independent areas (discipline inspection, training, militia mobilization, military law, science and technology, strategic planning, organizational reform, international cooperation, and auditing) will move to consolidate control of their areas, creating a number of important new players. Although several of these are unlikely to warrant a separate office on the Army staff, I believe that training, discipline inspection, military law, organizational reform, international cooperation, and auditing will. The PLA Army Leading Organ will thus more closely resemble the complexity of the U.S. Army Staff than the simplicity of the former PLA general departments.

Another notable factor is that the Army and other staffs are likely to have a higher-profile intelligence function combining both human and technical intelligence. These functions had separate offices in the old system but have been combined into the PLA’s new Strategic Support Force. This may ease the flow of intelligence, although barriers between the two branches will likely remain.

Finally, given that both the PLA Navy and Air Force have navigation offices, the Army is likely to want one too. Overall I expect the Army staff to function adequately, although I wouldn’t count on it creating a more cohesive joint force.

China’s Military Has a Hidden Weakness

The new anti-ship missile has over twice the range of its predecessor, revealed in 2014.

When militarism and national insecurity intersect, as they seem to be doing today in Asia, carnage often follows.

The contraction of U.S. defense and civilian industries since the end of the Cold War has made foreign inputs into key weapons programs indispensable.