BISHKEK — In the middle of a tough week–over last weekend 14 Kyrgyz died in a Moscow warehouse fire and Tuesday a suicide bomber attacked the Chinese Embassy in Bishkek–Kyrgyzstan celebrated its 25th year of independence. But rather than hailing the Kyrgyz Republic’s quarter-century, President Almazbek Atambayev unleashed his frustrations at those who have criticized him and the constitutional changes he’s presently pushing for.

The president’s speech was made in the morning before a large crowd gathered in Ala-Too Square and an array of military and police units prepped for the parade to follow. The speech, which went on perhaps too long (toward the end I saw one of the men standing in neat rows with weapons shouldered faint) also featured former Kyrgyz President Roza Otunbayeva storming offstage. 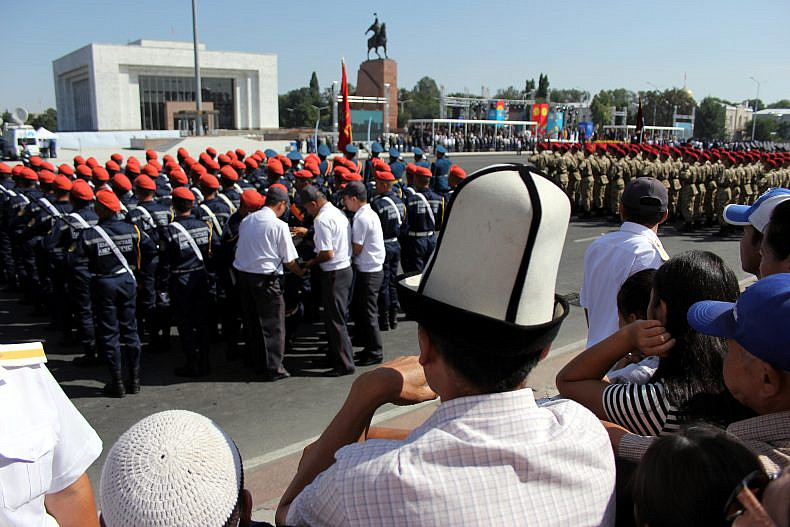 Security help carry a fainted solider away, hopefully to the shade. Photo by Catherine Putz.

Otunbayeva–who served as Kyrgyzstan’s interim president between the 2010 revolution and Atambayev’s 2011 election–is a key figure in the Kyrgyz political landscape. She, along with other former members of the provisional government that shepherded the present iteration of the Kyrgyz constitution, have been staunchly opposed to Atambayev’s attempts to change it. The Venice Commission, a body of constitutional experts hosted within the Council of Europe, however, responded to a request from a member of the Kyrgyz parliament to review the changes with the determination that they would “negatively impact the balance of powers.”

The proposed changes–which Atambayev hopes to pass via a referendum in the fall–include a widening of the powers of the prime minister, the creation of “supreme state values,” and dramatic changes to the judicial branch. Atambayev has often referred to “mines” in the 2010 Constitution and frames his press to alter the document as responsible demining. Others say it’s nothing less than an attempt to weaken the office of president as he leaves it. While Atambayev has said he is not looking to take up the prime minister post, he wouldn’t be the first politician to feign disinterest at first only to later take up office on request. How convenient if the prime minister’s position had been strengthened.

Atambayev decided that the best venue to promote his views on changing the Constitution was the country’s Independence Day.

Atambayev, per 24.kg’s translation of the speech, said his opponents were trying to defame him: “At the same time they accuse me of all sins and crimes, up to such a serious crime as the usurpation of power. And the apotheosis of this smear campaign became an appeal of the members of the interim government to the people.” He said the members of the interim government who had come out in opposition to the proposed constitutional referendum had lied.

He then took direct aim at Otunbayeva who was voted in along with the 2010 Constitution in the referendum organized shortly after the second Kyrgyz revolution removed Kurmanbek Bakiyev from power. “Not a single ballot had the names of the presidential candidate, and even a hint of a presidential election. And it is not true that she — Roza Otunbayeva — received 98 percent of votes… Such things don’t happen even in authoritarian countries.”

“Our country was in turmoil for four years because of all the mines laid in the constitution,” Atambayev said, repeating his favorite recent refrain about the 2010 Constitution.

At this point, Otunbayeva left the grandstand.

Kyrgyzstan’s present political turmoil is mixed with economic hardships that have not abated and security risks that don’t seem to be as managed as the authorities often claim.

After Opposition Leader is Detained, Protests Kick Off in Kyrgyzstan

Omurbek Tekebayev was detained Sunday as part of a corruption investigation -- supporters say it's all politics.

Kyrgyz prime ministers tend to have a short shelf-life.

Just as it was finally beginning, the trial of Almazbek Atambayev was postponed.