The US Exit: The View From Afghanistan 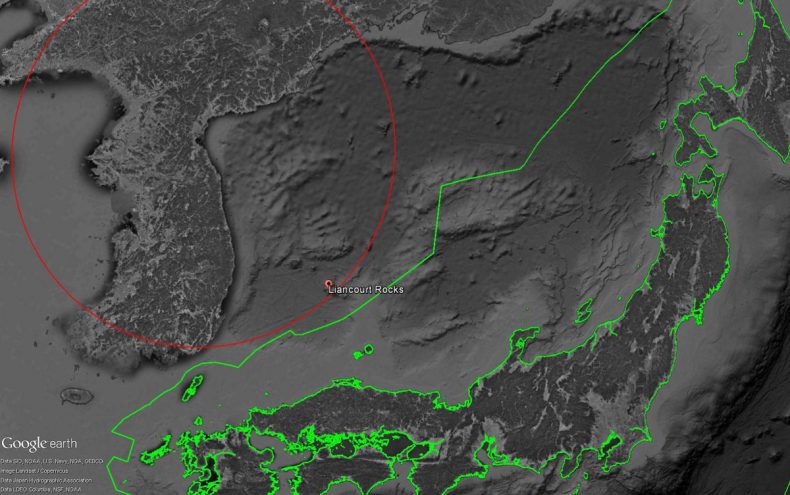 A map of the Sea of Japan, showing Japan’s exclusive economic zone without the inclusion of the disputed Liancourt Rocks, which are administered by South Korea as Dokdo. Red shows a range of 450 kilometers from Wonsan, where North Korea launched a missile on Monday. (Source: Google Earth, Marine Regions)

As Jeffrey Lewis first observed, the given flight range of 450 kilometers and Japan’s claim that the projectile splashed down in its EEZ can only be reconciled if one concedes Tokyo’s claim to the Liancourt Rocks (known as Dokdo in South Korea and Takeshima in Japan). The Dokdo/Takeshima dispute continues to be a sore spot in relations between Seoul and Tokyo, both of whom claim sovereignty over the features. South Korea administers the islands, but Japan claims them as part of its territory and, accordingly, claims an extended 200 nautical mile EEZ off the features. Thus, the only way a 450 kilometer ranged ballistic missile from Wonsan could land in Japan’s EEZ is if the EEZ is extended from around the disputed islands.

There’s good reason to think that North Korea may have been deliberately attempting to prod this sore point between two U.S. allies. First, North Korea’s short-range, liquid-fuel Scud-type missiles are by far its most reliable and well-tested set of projectiles. Pyongyang usually fires a single Scud — as it did twice out of Sinpo in April — for developmental purposes. If the Scud fired out of Wonsan on Monday wasn’t something unusual, like the still-in-development Scud-based anti-ship missile, then the launch may likely have been meant more for signaling or as a user trial. (North Korea additionally hasn’t conducted any known Scud tests or launches out of Wonsan since 2014.)

Second, exploiting a gap between Japan and South Korea weeks after the inauguration of a new president in Seoul makes sense for Pyongyang. South Korean President Moon Jae-in wasted little time after entering office; he immediately got on the phone with U.S. President Donald J. Trump, Chinese President Xi Jinping, and Japanese Prime Minister Shinzo Abe to discuss the North Korean issue. Anything North Korea can do to disrupt regional coordination and communication over its ballistic missile and nuclear weapon programs is to its benefit.

Moreover, trilateral coordination on missile defense and intelligence-sharing on North Korea continues between the United States, South Korea, and Japan. Japan publicly claiming that a missile landed in its EEZ off Dokdo could harm this momentum, amplifying burgeoning signs of alliance stress between Seoul and Washington as well. While Suga presumably took North Korea’s bait by immediately claiming that the missile landed in Japan’s EEZ on Monday, South Korea has yet to respond publicly to Tokyo’s claim, suggesting that Seoul may be one step ahead of Pyongyang’s intentions with Monday’s launch. (South Korea may be taking up the issue with Japan through more discreet channels.)

For additional context, consider that North Korean state media, earlier this year, strongly criticized Japan after Foreign Minister Fumio Kishida claimed the disputed isles. Moreover, just more than a week ago, South Korea rebuffed complaints from the Japanese government over its marine research around Dokdo. Tokyo asserted that South Korea should have requested prior permission to carry out marine research in its EEZ. Cho June-hyuck, a South Korean foreign ministry spokesman, said “Our stance is that we will sternly respond to Japan’s unjust claims to our inherent territory,” he told reporters. “There is no need for us to ask for prior admission, and we don’t have to do such a thing.” North Korea may have sensed an opportunity with another flare-up of the dispute so early in Moon’s term.

Finally, after the North Korean launch, U.S. President Donald J. Trump managed to ignore both Northeast Asian U.S. allies in a short statement he released on Twitter about the launch, instead discussing how North Korea had shown disrespect for China by carrying out a ballistic missile launch: “North Korea has shown great disrespect for their neighbor, China, by shooting off yet another ballistic missile…but China is trying hard!” As I’ve explained before, the United States is very unlikely to wade into the Dokdo/Takeshima dispute to avoid having to mediate between its allies. The Trump administration isn’t likely to break with that tradition.

Ultimately, if North Korea was intentionally seeking to drive a wedge between Seoul and Tokyo over the disputed islands, it hasn’t succeeded in that endeavor just yet. Much will depend on whether and how Seoul chooses to push back on Tokyo’s assertion.

Did North Korea's Latest Missile Launch Seek to Drive a Wedge Between Japan and South Korea?

Seoul denies that its warship deliberately locked on to a Japanese military aircraft.

South Korea’s Fight Against the ‘Sea of Japan’ Pays Off

The country’s long battle for co-use of the names “East Sea” and “Sea of Japan” is over as the IHO decided to adopt a new numerical system.

The two Russian bombers and escort aircraft were conducting a 10-hour flight over the Sea of Japan and East China Sea.

Brave Girls hit it big after a viral video popularized a four-year-old song.

Over 200 Chinese ships occupied Whitsun Reef for several weeks. Only a handful remain.

The new outbreak threatens to undermine Thailand's economic recovery before it has even begun.

Why Did Young South Koreans Ditch the Democratic Party and President Moon?

In the crucial by-elections, young voters turned away from the ruling party they once supported. What happened?

The US Exit: The View From Afghanistan

By Marcin Jerzewski and Sana Hashmi

Taiwan could gain outsized rewards from promoting the field in Australia, India, and Indonesia.

Myanmar's political crisis has created the conditions for a possible widening of the jihadi theater in Southeast Asia.

Amid a second wave of COVID-19 infections, hundreds of climbers are set to scale the world’s tallest mountain.

An unofficial delegation led by former Senator Chris Dodd completed a three-day visit to Taiwan in a show of support from the Biden administration.

With public trust in tatters, vaccine hesitancy has become a serious hurdle for the government’s pandemic strategy.

A quick look at the diverse factions involved in the 2020 primary elections belies Beijing's claim that there was a unified conspiracy toward subversion.