From June 1 to 3, 2017, Indian Prime Minister Narendra Modi made his third trip to Russia, marking 70 years of India-Russia relations. One of the highlights on the economic front was the joint address by Modi and Russian President Vladmir Putin at the St Petersburg International Economic Forum (SPIEF), popularly known as the Davos of Eurasia.

Modi’s visit, just 15 days after China’s Belt and Road Initiative (BRI) Forum, which India did not participate in, holds significance for the International North-South Trade Corridor (INSTC), which would connect India, Iran, and Russia through Central Asia. Three days after the BRI Forum, various stakeholders from the diplomatic, civil society, and business communities came together for an INSTC conference at India’s Foreign Service Institute in New Delhi. At the conference, the main issues were finalization of the INSTC routes and the development and optimal utilization of the Chabahar port in Iran to complement INSTC.

India and the Eurasian Economic Union

Other than geopolitical significance, the geoeconomic importance of the INSTC is based on the fact that, amidst declining trade values, India and Russia have pledged to ramp up trade to $30 billion over the next 10 years. This is no doubt extremely optimistic as bilateral trade between India and the entire Eurasian Economic Union (the EEU, consisting of Russia, Armenia, Belarus, Kazakhstan, and Kyrgyzstan) was merely $8.4 billion in 2015-2016.

However, this pledge was buttressed by a strong Indian presence at SPIEF. It has been noted in the past by Gleb Ivashentsov, a former Russian diplomat, that there is a lack of information on Indian markets for Russian enterprises. If the Modi government wants to get the most out of the EEU free-trade agreement it is pushing for, India must demonstrate a strong and continuous engagement with the private sectors of the EEU countries.

Here, it is important to note that all countries of the EEU are enthusiastic supporters of the BRI. Putin’s statement at the BRI Forum is to be noted:

It is important that all integration structures – both existing in Eurasia and newly formed – would rely on universal internationally recognized rules, and, of course, take into account the specific features of the national models of development of the participating states, act openly and transparently. 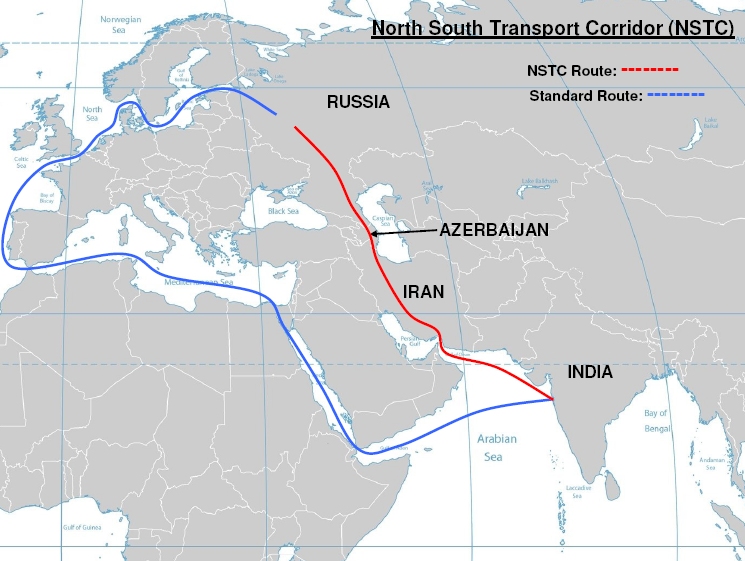 It must be noted that none of the countries along the INSTC have the economic wherewithal to shoulder projects that are commercially unviable. As Ritika Passi of Observer Research Foundation notes, “the INSTC should be nurtured as a commercial project and the focus should be on reaping its economic advantages.” And those advantages could be substantial: a much-discussed study by the Freight Forwarder Associations of India concluded that implementation of the INSTC will reduce trade costs by 30 percent and distances by 40 percent compared to the existing routes, which involve routing goods through Rotterdam Port in the Netherlands.

However, intra-INSTC trade is certainly not of significant volumes at present. The imbalance of trade leads to a unique issue where there is a surplus of empty containers accumulating at one end and a shortage of available empty containers for shipping at the other. To this end, India’s engagement at SPIEF is the first step to connecting the grouping’s markets to generate sufficient trade volumes in both directions. The promotion of EEU products in the domestic Indian market would be another welcome strategy.

On the regulatory front of the INSTC there has been some progress. On March 6, India acceded to the TIR Convention, a multilateral framework designed to facilitate container trade across borders with minimum hassles along the way. After India’s accession, all INSTC countries, except Oman, are party to the TIR Convention. Another positive sign was the establishment of a “Green Corridor” between India and Russia, which would allow enterprises that are party to the agreement to bypass regular customs process when transporting goods along the route.

However, on the technical front, problems involving the multi-modal nature of transport along the corridor require a greater focus. In particular, there’s the issue of the varying types of railway gauges used by INSTC countries, preventing the smooth movement of freight along the corridor. With the incoming BRI rail infrastructure, which is likely to follow China’s smaller railway gauge, this is only going to complicate the INSTC’s mismatching gauge issue further.

During the BRI Forum, the EU decided not to support a statement prepared by Beijing about trade, citing transparency concerns. On the other hand, a lack of transparency is unlikely to be a problem to the nations involved in the INSTC. Additionally, European businesses have shown an interest in the INSTC to promote trade with the region. However, the role of Iran as one of major hubs of the INSTC is a concern on a geopolitical level, especially given the danger of new sanctions under the present U.S. administration and the importance of private sector investment in the corridor.

Having said this, it is clear that the world does not view the INSTC with the same level of suspicion as they view the BRI. Regardless, the INSTC is hardly a contender to China’s mammoth BRI, and certainly it must not be viewed as such. Instead, the INSTC should try to leverage the connectivity gaps filled in by the BRI, especially in Central Asia. It is also important that the INSTC grouping not be weighed down by India’s heightened sense of rivalry with China. In the interest of promoting regional development in Central Asia, it would be ideal for both initiatives to pay heed to one another.

Roshan Iyer is a Research Assistant at CUTS International working on the regional integration of India’s neighborhood. The views expressed in this piece are personal.

Nepal Joined the Belt and Road. What Does That Mean for India?

How should India respond to its neighbors' embrace of China's "Belt and Road"?

What Drove India’s Jaishankar to Bangladesh?

Regional geopolitics was an important item on the Indian foreign minister’s agenda.

What is behind India's recent outreach to Armenia, including the first-ever visit by an Indian foreign minister?