Hazera Begum woke up in Gulistan, which is across town from where she lived. She was only eight and hungry. She had taken a bus after having a clash with her stepmother and slept on the journey. Her fisherman father wasn’t capable of feeding his children, including her; poverty was like a constant nightmare for Hazera. But she didn’t know that a real nightmare was waiting for her.

Hazera found some street children around her age, made new friends, and found herself in a completely different world. After a short while she has been picked by a government rehabilitation team and sent to a rehab center. Within a short time she was taken to a center’s officer’s home to work as a servant (child domestic workers are very common in Bangladesh). Hazera was regularly bitten by that family and finally she escaped. And then the nightmare began.

She found herself in Kandupatti, the brothel of the capital Dhaka (it was later evicted). After spending two years in that red-light area, Hazera escaped again but failed to find any suitable job. So she continued as a sex worker but this time as a street prostitute. She later went to the country’s then largest brothel Tanbazar (later it was forcibly evicted also) in Narayanganj district. She stayed there for three years.

Meanwhile, Hazera met some NGO workers who teach her a very basic education. She also took lessons on making handicraft and then took a job in a garment factory. The salary was very low — 300 taka ($3.75) per month — but she was happy to see her life changing.

This rosy time didn’t last long. She was living in a government rehab center. When the officers discovered her employment, they kicked her out because the shelter was not meant for people with a permanent job. They didn’t try to understand how a woman could live outside the shelter on less than four dollars a month. So the nightmare began again, as it had many times before. Hazera again started sex working to survive.

One day locals forced Hazera to marry a man without registering the marriage. The man didn’t take responsibility of his wife, which forced Hazera to continue the sex trade for a living. Eventually the relationship broke up and Hazera said goodbye to her so-called conjugal life.

After that, things began looking up again. She met up with an international NGO, CARE, where she managed to get a job and learned English. She even went on some overseas visits, working on different projects related to HIV issues. 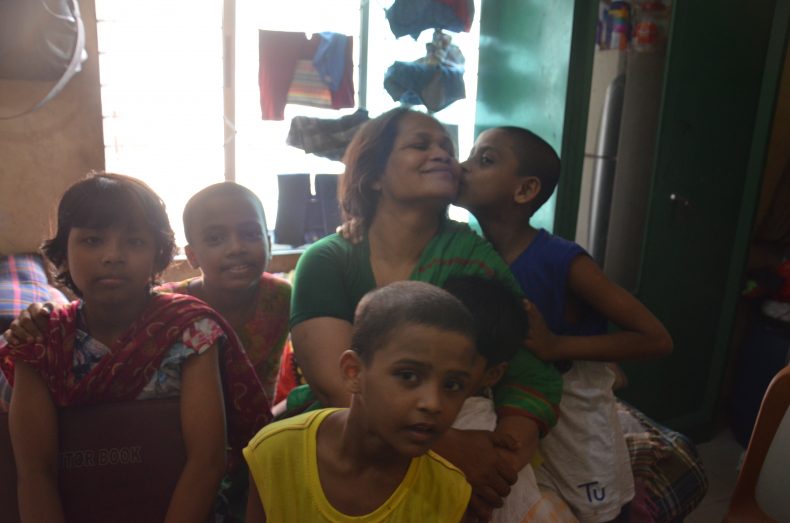 Hazera gets a kiss from one of the children at her shelter. Photo by Shakil Bin Mushtaq.

It was while working with Durjoy, another organization of sex workers, that Hazera started thinking about the children of sex workers . She was assigned to look after the sex worker’s children under a Durjoy project, but the funded child center was shut down in one day. Yet Hazera was determined to keep caring about these children. She started talking with some progressive-minded university students about her dream. She pulled her whole life’s savings — 800,000 taka ($10,000) — and started her dream organization, which she named Shishuder Jonno Aamra or SJA (meaning “We Are for the Children”) and registered with the government’s Social Welfare Department.

Hazera started SJA in 2010 with 20 kids; the organization now serves 35, from 4 to 16 years old. Hazera has become a mother to all these children, who call her “Ammu” (Mom). She feeds them and assigns a tutor outside of school.

Her challenge never ends, however. Hazera faced problems admitting these kids to the local schools because Bangladesh requires a father’s name for each child. So far, Hazera has used a work-around solution: well-wishers from among the university students came and listed their names as the children’s father.

Hazera gets support from different charity organizations, individuals, and government donations to help her keep running the kids shelter. “But a lack of  permanent land is the main challenge now,” this 46-year-old Ammu told The Diplomat. “Running such a shelter in a capital city by renting is too expensive and difficult to manage.”

Hazera never birthed her own child, as she was always worried about the future of a prostitute’s child. But now she is happy with these 35 kids and dreams of sheltering even more. 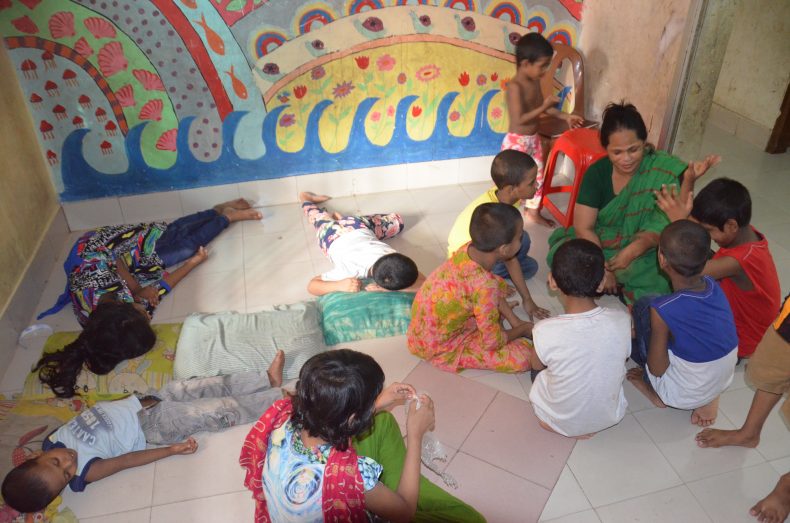 Hazera with her children. Photo by Shakil Bin Mushtaq.

Shakil Bin Mushtaq is a Bangladeshi journalist with experience working for domestic and international publications.