Indian and Chinese forces have been locked in a standoff over the Doklam plateau, a territory disputed between China and Bhutan, since June. The disputed territory is located at the Doka La pass, a tri-junction where Bhutan borders the Indian state of Sikkim and the Tibet Autonomous Region of China. India, which enjoys a close relationship with Bhutan, is concerned about Chinese encroachment in Doklam because it would bring Chinese forces closer to its vulnerable “Chicken’s Neck” – the narrow Siliguri Corridor that connects India’s northeast to the rest of the country.

In 2005, Bhutan considered yielding territory in the Doklam region to China in order to regain land in northern Bhutan – at least twice the size of the Doklam plateau. However, Bhutan acquiesced to India’s wishes to cancel the deal, demonstrating the power of the bilateral relationship between the two countries, which has been strengthened by years of close cooperation after the People’s Liberation Army (PLA) cracked down on dissent in Tibet in 1959.

Despite China’s geopolitical and economic rise in recent decades, and their shared border, Bhutan remains guarded against its northern neighbor, forestalling the development of any diplomatic relationship. Such behavior is often questioned – after all, the argument goes that Bhutan would only have to give up a minuscule piece of land in order to normalize relations with a neighbor whose investment potential far exceeds that of India’s. Recently, some Bhutanese analysts have even suggested that Bhutan lacks a strong claim to the disputed portion of the Doklam region.

Bhutan first began holding democratic elections in 2008. Given its small population of only around 800,000 people, public sentiment is a key factor in understanding what policies the Bhutanese government ultimately chooses to pursue. Moreover, unease within Bhutanese society is indicative of the country’s fear over the strength of a neighbor that utterly dwarfs it in size, resources, and military capabilities. In order to ascertain whether the Bhutanese population is open to a resolution with China that involves a territorial exchange, or if it is more amenable to the Indian position that Bhutan hold firm against Chinese incursions, we consulted the data.

ENODO’s analysis revealed that approximately 76 percent of Twitter and 65 percent of Facebook Bhutanese social media users questioned Bhutan’s over-reliance on India’s diplomatic channels to broker a deal with China. Messages on Bhutanese news websites, blogs, and Facebook reveal anxiety regarding the absence of a direct dialogue between Bhutan and China. For example, a cartoon on Facebook group “Bhutanese Forum” (Figure 1) indicates the scale of China’s incursion, while the associated hashtags #bullyingNeighbor and #China demonstrate the pervasiveness of Bhutanese frustration and a sense of abandonment by India. 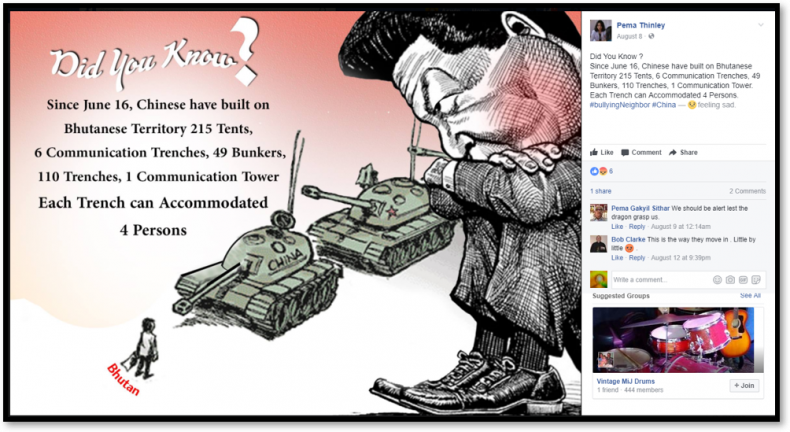 Analysis has also uncovered the crisis’ strengthening of Bhutanese resolve. The people of Bhutan do not want to be seen as pushovers, which is reinforced by the Bhutanese people’s sense of identity and nationalism. This is illustrated by the large number of tweets, including #WarClouds, #Thunder, #Dragon that center on pride in Bhutanese culture and values. Moreover, The Bhutanese, a nationally prominent newspaper in Bhutan, published an op-ed noting that “Bhutan is neither a ‘vassal’ nor a ‘protectorate.’” Commenting on Facebook about the Chinese incursion in Doklam, the author Tenzing Lamsang said, “Bhutan has successfully defended its sovereign borders against its much bigger neighbors, and even made territorial conquests in some cases,” a message to both India and China.

Moreover, evolving public sentiment in response to specific events are profoundly influencing the standoff. In less than 24 hours after Indian boxing champion Vijender Singh forfeited his title in exchange for India-China peace, thousands took to Twitter to support India’s might, which ultimately supports Bhutan. New hashtags emerged every hour including: #BattleGroundAsia, #IndiaProud, #BoycottChineseProducts, #DoklamHisaabBarabar, and #PeaceIsPossible. The fluid nature of the conflict, compounded by continuously evolving public sentiments, which is instantaneously amplified over social media, make it increasingly difficult for traditional negotiation to occur.

However, despite the changes in public sentiment, there remains the constant uncomfortable fact that any war between India and China over Bhutan would utterly devastate Bhutan. According to ENODO’s analysis, Bhutanese fear of conflict is closely tied to China’s occupation of Tibet in 1951. The Doklam crisis is exacerbating fears of annexation and erodes the public’s trust in a peaceful resolution of the crisis. Twitter hashtags #ChinaIndiaStandoff, #China, and #India illustrate the belief that China may annex Bhutan, in a repeat of the PLA’s march into Tibet.

Nonetheless, the Bhutanese government has so far not strayed from the Indian position and pursued a resolution to the border conflict independently of India. The crisis seems to be at a stalemate. The Indian government has been emphasizing the need for a diplomatic resolution, meaning there is little incentive for the Bhutanese government to do anything other than continue to incrementally increase its engagement with China, as it did before the crisis. The Indian government, too, probably realize that it stretched the crisis out long enough to gain credibility, but not so long as to play into a possible Chinese strategy to drive a wedge between Bhutan and India.

It is highly unlikely that the current boundary dispute between Bhutan and China will be settled anytime soon, as the stakes have been raised in both India and China. The Bhutanese government may also calculate, that despite the risks of escalation with China, as long as risks are managed, it gains more from its special relationship with India. After all, as long as the border dispute is unresolved, there is a chance that Bhutan may be able to bide its time for a more favorable resolution, while getting special perks from India. If Bhutan chooses to stray, both its territory and a privileged relation with India would be lost. Regardless of Bhutan’s choice, given the influence of public opinion on the outcome of the standoff, understanding public sentiments on all sides through a population-centric approach can aid in the creation of a path towards a strategic deescalation of the conflict.

Corrections: This article has been updated to reflect that The Bhutanese is not Bhutan’s largest newspaper. An earlier quote incorrectly attributed to Tenzing Lamsang has been removed as well. The Diplomat regrets the errors.

China's vice foreign minister made a rare trip to Bhutan to discuss the bilateral relationship between the two countries.

Northeast India could be Bhutan's new gateway to the world.

The choices that Bhutan makes will steer the resolution of the ongoing Himalayan impasse.

Mohammed Zubair’s work, which was critical of the government and outed peddlers of fake news, seems to have ruffled feathers.

As with previous rounds of unrest and crackdown in GBAO, the core issues remain unresolved.