CON DAO ISLANDS, VIETNAM — At noon on April 30, 1975, the prison guards, administrators, and their families locked the gates, cells, and doors of the various prison buildings dotted around central Con Son island, and fled on waiting boats. Within hours, the 6,954 male and 494 female prisoners had freed themselves, bringing an end to 113 years of the island’s role in imprisonment, torture, forced work, and death.

“On May 1, 1975, Con Dao was completely liberated. From then on, it has been undergoing a vigorous change to become a ‘jade’ island of our country,” states an information board at the Con Dao town museum. The large museum offers graphic details into the conditions prisoners faced, including depictions of the torture and beatings of naked prisoners, and the additional post-1960 punishment of “denouncing communism,” as well as information on notable prisoners, including former President Ton Duc Thang.

The museum also focuses on the environmental importance of the island, which in 1993 saw the establishment of the 20,000-hectare Con Dao National Park, some 14,000 hectares of which are a marine protected area. 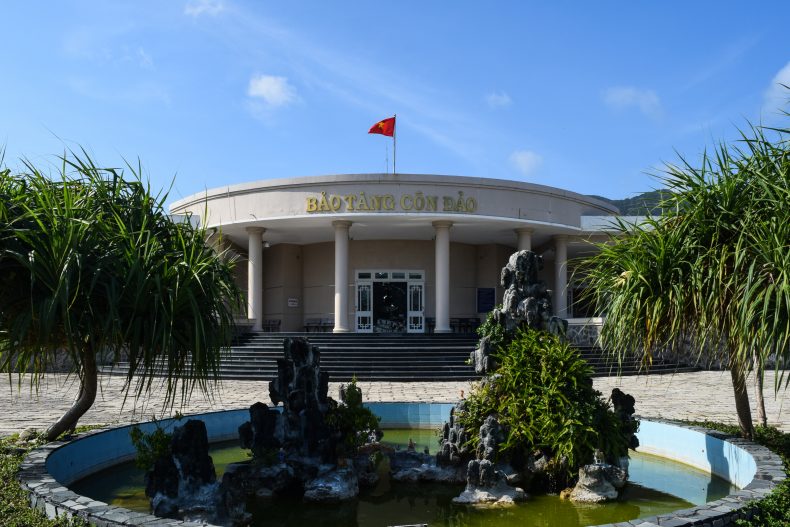 This natural beauty is a major attraction of the island in its own right, with exclusive luxury beach resorts catering to the wealthy, and empty swathes of sandy beaches offering the elusive desert-island experience that coastal developments across the region have made increasingly hard to find.

Inhabited for at least 2,500 years, the Con Dao islands are home to turtle nesting beaches, endangered dugong, coral reefs, and forested hills. They have played a role in the Southeast Asian aspirations of the Portuguese, British, French, Japanese, and Americans since the late 1600s, and continue to figure in Vietnam’s territorial claims in the South China Sea. For much of the past 500 years, the islands were known at the Poulo Condor islands by non-Vietnamese, and this is how they they appear on French-colonial maps.

Located some 100 kilometers south of mainland Vietnam’s southern coast, their remoteness made them an ideal penal colony, with the prison population averaging 2,000 at any one time during French control, but rising steadily to some 10,000 in the early 1970s.

According to Peter Zinoman in his book The Colonial Bastille, almost all senior communist leaders apart from Ho Chi Minh spent time in French colonial prisons, most on Con Son, and the close confinement of anti-communists and nationalists with communists saw the dissemination of Marxist-Leninist teachings.

“The Indochinese prison system provided a curiously stable environment for the reconstitution and expansion of the ICP [Indochina Communist Party],” Zinoman notes. 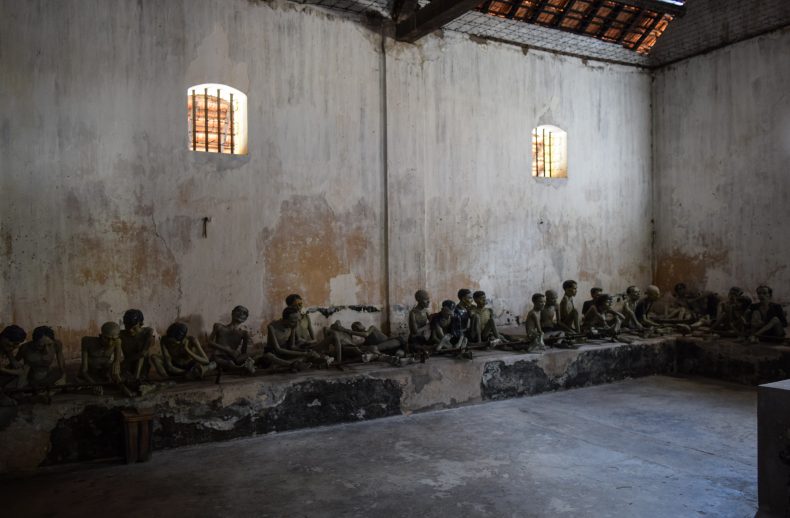 The islands were ceded to France in the 1787 Versailles Treaty, and Phu Hai, the first prison on Con Son, was built by colonial authorities in 1862 to house political dissidents from Cambodia and Vietnam. As resistance to the French grew, so did the number of prison buildings, which spread along the shore of central Con Son island and grew to include plantations and quarries reliant on prison labor. In 1954, the island came under the control of the American-supported government of southern Vietnam, who built more prisons to accommodate a near doubling of the prison population. Many of these buildings are open to visitors.

Con Dao town sits within meters of the seafront, with the simple terracotta-tiled houses of the original French administration officials overlooking the golden sands of Lo Voi beach. Wide, tree-lined boulevards, shops advertising scuba diving and fishing expeditions, forested hills to the west and the town’s laid-back pace of life — it largely shuts down at lunch time for siesta — present an image that masks the island’s history of torture, imprisonment, and death.

“Enjoy your visit here. Everything is very nice, very peaceful,” said the beaming waitress at the Doraemon Cafe, decorated with pictures of fast food and the eponymous cartoon character.

But she adds that, to her, “the history is bad,” pointing at the prison walls across the road. 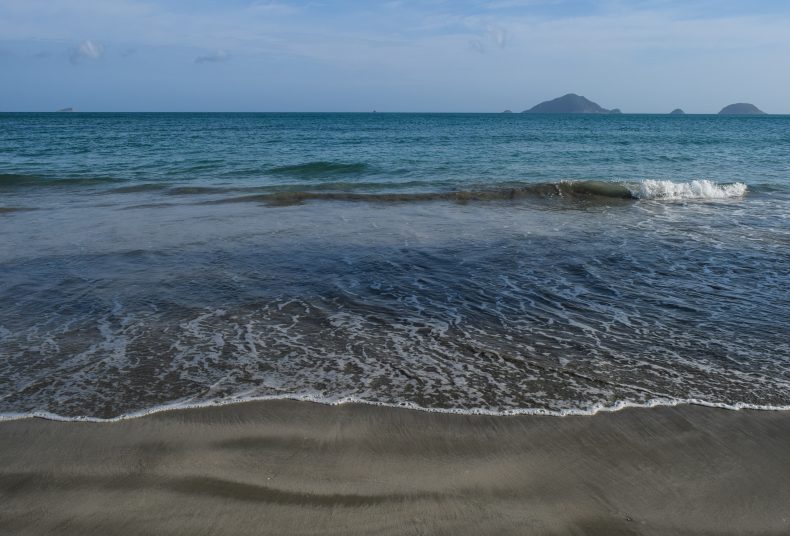 The hospitals, schools, and banks dotting the town are evidence of the island’s emergence as a domestic tourism destination after Vietnam’s unification. Visitors from across Vietnam fly or take the ferry to eat the fresh seafood on offer and enjoy the empty beaches; they also pay their respects at Hang Duong cemetery, where more than 20,000 prisoners who died or were executed are buried, and see the prisons where they were interned.

The 3-meter high grey stone walls of the early French prisons, topped with shards of broken glass, offer little clue to what lies behind. Passing through the small front gate of the first prison, the blue-green painted windows and cream colored walls of the large halls form three sides of the central courtyard, with a modest church in the center. The hundreds of life-sized models of emaciated naked prisoners, closely shackled together, offers a grim reminder of the prison’s use and the treatment meted out by guards from across the French empire.

“[M]ost of the guards are drunkards and opium addicts who are, with rare exceptions, are involved in various forms of collusion with the inmates. The degree of corruption is so extensive and the number of negative elements so large that it seems foolish to attempt a moral and material reorganization of the penitentiary,” Zinoman quotes the Con Dao penitentiary director from 1910 as saying. 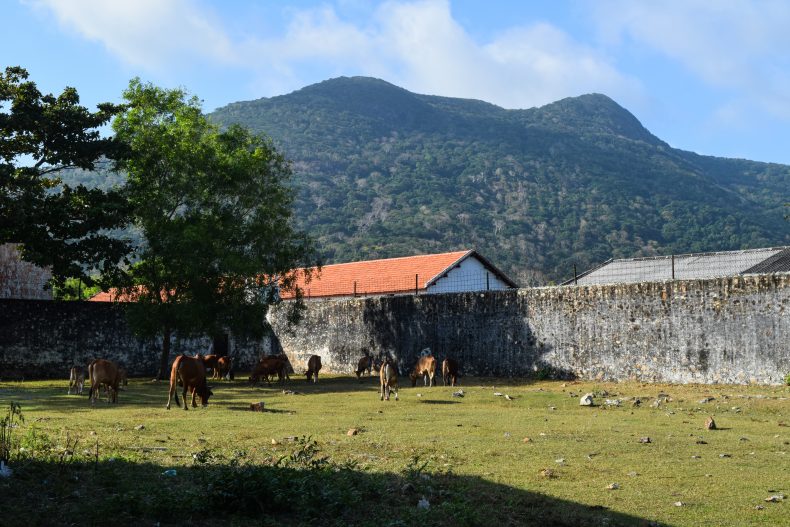 The outer walls of the French-built Phu Tuong prison, with the hills of the national park behind. Photo by Peter Ford.

In contrast to the terrible conditions the prisoners faced is the natural beauty of Con Son. Many of the prison and administration buildings are only a stone’s throw from the sea, and the green hills that ring the rest of Con Dao town are ever present. Hiking routes on the forested hills further provide opportunities to enjoy the islands’ relatively untouched nature, with sweaty two-hour hikes rewarded at low tide by empty beaches and solitude.

The view also clearly highlights how futile escape from the islands must have felt to the prisoners; powerful waves crash into cliff walls, and the mainland is an impossible distance to swim. Some still tried. The Con Dao museum has displays on a number of escape attempts by boat, but most were unsuccessful and resulted in recapture or death at sea. Colonial authorities elsewhere in Asia made use of islands for prisons, useful as they were not just for the difficulty of escape, but also in keeping political prisoners away from susceptible populations.

But while the prison and administration buildings on Phu Quoc in Vietnam and Jerejak in Malaysia are threatened by ambivalence to preserving sites of historical importance, and the destruction of nature in the name of development, Con Son remains relatively untouched. 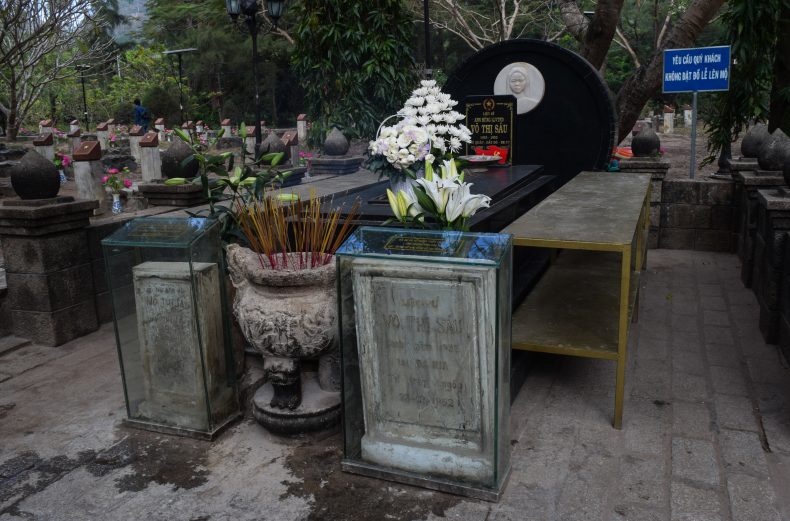 The popular grave of Vo Thi Sau, the first female to be executed on Con Son, aged 19. Photo by Peter Ford.

Its flora, fauna, and prisons remain, making it both a beautiful getaway from traffic-clogged Ho Chi Minh City, and a poignant reminder of Vietnam’s long struggle to become a unified, sovereign nation.

“I come every year to visit the grave of the heroine Vo Thi Sau, and to pay my respects to the others who died here,” explained Nguyen Tan Dao, a former soldier in the North Vietnamese Army, after leaving Hang Duong cemetery.

“But I also enjoy the clean air and clean beaches that used to be everywhere in Vietnam,” he added.

Peter Ford is a freelance journalist based in Phnom Penh, Cambodia. He tweets @Peteaford.

Why Won’t Vietnam Teach the History of the Sino-Vietnamese War?

Vietnam is reluctant to include the 1979 conflict in history textbooks, continuing a decades-long silence.

Perception of Corruption Stagnates Across Asia

Governments in Asia are perceived to be as corrupt as ever.

In Defense Minister Talks, US Reaffirms Commitment to South Korea

The detention facility’s purpose has diminished, but the country’s geopolitical importance has increased. In the meantime, 73 people languish there.