Kazakhstan’s government has come under fire on social media once again for the alleged plagiarism of the logo of one of the most visible public initiatives in the country, fueling public disappointment.

The subject of the matter is the bird-shaped logo of Rukhani Zhangyru, “spiritual renovation,” a state program aimed at the modernization of society, adopted last year. The concept, shape, and colors of the logo are suspiciously similar to the one used by L’Aigle de Patmos, a French theater company, in 2009. 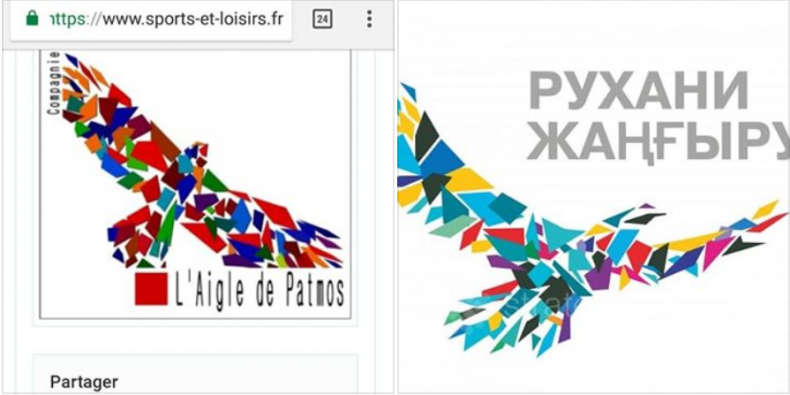 “Despite the similarities, which are evident, I don’t think it’s a case of plagiarism. We will investigate it further,” Abayev told local press.

In social media, the scandal echoed for days, with local users blaming a system without meritocracy, where those in charge of designing the logo were probably poorly paid and knew that the government would not check their work against possible plagiarism. Others alleged that this scheme allowed some to pocket public money, while the vast majority seemed resigned to a trend of plagiarism in the country.

In late 2017, designers in Kazakhstan brought to public attention a blatant case of plagiarism that appeared on the new 500 tenge banknote, where one of the seagulls was copied and pasted from a Wikimedia Commons image.

The Central Bank, in charge of designing and issuing the banknote, said that the similarity was purely coincidental.

“Every detail of the banknote is first manually designed by our in-house team, without the use of graphic editors,” the bank told the press. “This is a necessary and indispensable condition in our production process.”

In terms of plagiarism, some have even found suspicious similarities between the Baiterek, the tower-like symbol of Astana, and a Soviet-era design. Instead, the monument is said to be President Nursultan Nazarbayev’s brainchild, with the original sketch of its design kept behind a glass case in the National Museum in the capital city.

Yet, between fake news and bloggers, social media is rife with plagiarism. Some of the most famous writers in Kazakhstan’s social media have repeatedly been criticized for copying their prose from others. Yerzhan Rashev, a popular blogger living in Almaty, had his Facebook posts highlighted by disgruntled followers who demanded his apologies for blatantly copying other writers. Rashev responded that his followers were just reading Facebook posts, not books or academic articles.

“I give an alternative point of view on life and events. Plagiarism was among the scandals that effectively made me famous,” the blogger said in a video interview.

The marketing trick used by the popular blogger disappointed several of his followers.

“This way it feels like he is betraying his audience. We believed in him… because we have almost nothing else to believe in, given the lack of independent press in our country,” one reader told The Diplomat.

On May 28, a local court ordered the closure of independent news website Ratel.kz, which had been a target of police raids in April, together with the local Forbes magazine. After the shutdown of Radiotochka last year and repeated harassment of several other outlets, there are virtually no independent news outlets left in the country.

At the end of 2017, the government also passed a harsh media law. In response to the signing of the bill, media watchdog Reporters Without Borders (RSF) said that the new amendments complicate the right of access to state-held information and the ban on anonymous online comments could result in jailings for opinions expressed on the web.

Together with widespread internet censorship, lack of media freedom makes the discourse on plagiarism even more salient for people in Kazakhstan. State-sponsored plagiarism, be it in logos or banknotes, paired with Facebook plagiarism by the most popular bloggers, means that they cannot rely on or trust anyone.

Playing on the translation from Kazakh, one social media user half-jokingly said that Rukhani Zhangyru could well be a state program “to change our minds.” In the absence of the warranted checks on the flow of information, this scenario could not be so far away from reality.

Protest Körpe: Quilting Together ‘Real’ and Digital Dissent in Kazakhstan

Creative demonstrations for an imprisoned activist in Kazakhstan bridge digital and real-world engagement.

By Nicole Winfield and Kostya Manenkov

The most noteworthy aspects of Pope Francis' visit to Kazakhstan might be the missed opportunities.

Pakistan Shouldn’t Get ‘Aid’ After Its Devastating Flood. It Is Owed Climate Reparations.

After decades of climate injustice, the West should pay long overdue reparations to Pakistan and other development countries that bear the brunt of climate change.

Why Mongolia Is Steering Clear of Full Membership in the SCO

Mongolia was the first observer state in the Shanghai Cooperation Organization, and it has been content to remain there even as other countries upgrade to member status.

Why are Japan and South Korea, both U.S. allies and East Asian democracies, continuously at odds over everything from their territorial dispute to wartime labor compensation?