A faint hiccup interrupts the mechanical beeping in the Australian clinic, and a few seconds later, another. It’s the first sound of a treatment that will cost more than $6,000 and require months of care. At Currumbin Wildlife Hospital in far south Gold Coast, a koala has become a daily event.

Koala numbers have skyrocketed at the wildlife treatment center nestled among the eucalyptus, but the koalas are not coming for a snack. Some come from more than 100 kilometers away, but only half will ever return. The other half will pass, often with problems that could have been prevented with earlier intervention.

Pyne has worked at the Currumbin Wildlife Hospital since 2000, helping tens of thousands of animals return to the wild, but also seeing many take their final breath. 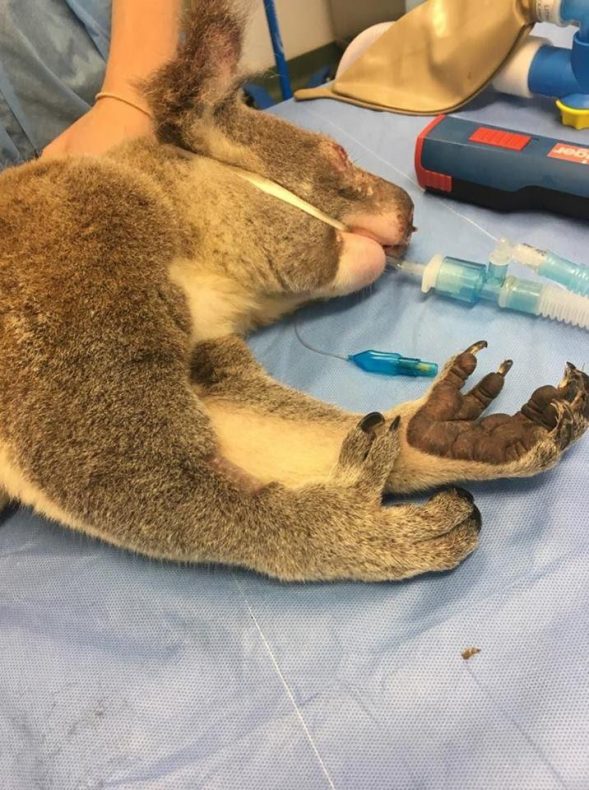 A koala under anesthesia as the veterinarians take samples (Zie Raya)

Dog attacks and vehicle collisions are well publicized, but result in less than a quarter of all koala admissions to the facility. The big pain here is a life of chlamydia. The disease that has ravaged koala populations is believed to have mutated from sick livestock originally brought over by Europeans.

Koalas have the “bad luck of the draw,” as Pyne puts it, being unlucky enough to end up with a chlamydia mutation and a perfect storm scenario. Koalas already have epidemic infection levels of the koala retrovirus, a virus closely related to HIV/AIDS. It lowers the koala’s immune system making them more susceptible to disease and cancers. As some studies have put infection rates of the retrovirus near 100 percent, it allows chlamydia to wreak havoc in a pre-weakened koala population.

During a sunny mid-autumn day, a koala has been brought into the center. It is released from the transportation cage soon after arriving from Coomera, 50 km north. The small grey marsupial glances around the drab treatment facility as it waddles on the floor. This is the first stage of the treatment as two veterinarians observe the koala, looking for problems.

“If I had to guess this early, the outcome doesn’t look good.” Pyne can tell immediately the dire state of the little fluff ball.

As can his colleague Dr. Andrew Hill, who leads treatment today.

“He is completely blind in one eye,” Hill says, explaining that puffing around the eyes and blindness are common symptoms of koala chlamydia.

The koala is promptly sedated with a blue towel wrapped around him to aid in the process. He quickly passes out and is moved to the nearby medical table. Hill, along with a veterinary nurse and a student, start to work on the marsupial. Looking at the koala’s teeth, a reliable method to age a koala, they estimate that he is six years old

A quick shave here and there, and they have taken several samples to study. Next, it’s onto the X-rays, with a medical imaging suite mere meters away. The efficiency of the staff is remarkable, if not also a tad disheartening. Knowing that they treat so many koalas the performance is near perfected.

Within a blink, Hill is preparing the samples and looking at them under a microscope. It’s a turnaround speed that would cause envy for any public hospital doctor. Blood, bone marrow, fluids, he looks at them all and he already seems chirpier.

While the koala has obvious signs of chlamydia with severe conjunctivitis, he is given the full check-up looking for any other injuries or other issues, like leukemia. The samples look clear, revealing no other problems in the male. 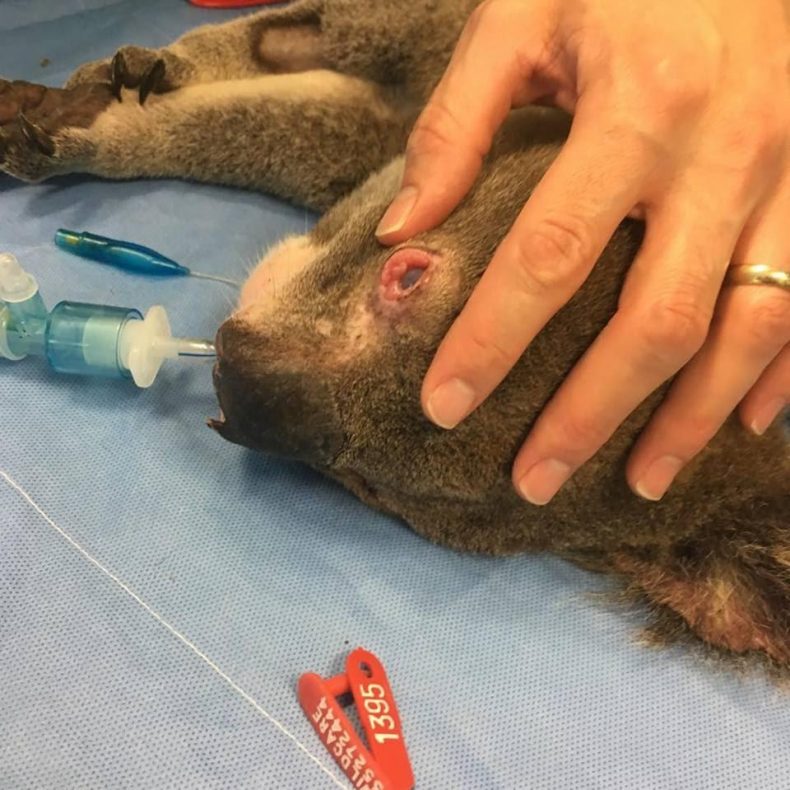 Chlamydia has caused complete blindness in this eye (Zie Raya)

A few steps back towards the X-ray room, and he is clicking through the images on a nearby computer. They have captured the koala from four different angles.

“Ahhh!” Hill says a minute into the slides. “He’s got some issues here, his wrist.”

What seems normal to the untrained eye, is a small blip for the veterinarian and an additional problem for the koala. A previously unseen and unknown infection has been uncovered in his right wrist and will require additional treatment.

Female koalas are tagged on their right ear, while males the left. A hole is punched into the koala’s floppy ear, and a tag inserted. A microchip comes shortly after, and soon this koala will awake to a future much brighter.

“About half that come in won’t survive,” Pyne says glumly.

He is ever optimistic at the increasing public awareness and work they do at the hospital staffed by over 100 volunteers with 10 full time-equivalents. But the major concern is financial.

Koala chlamydia is preventable with vaccinations and koalas are docile and easy to catch for a professional. Pyne yearns for the funding to vaccinate all koalas and remove the debilitating virus from decimating a national icon.

He says the government funding just isn’t there, which is where 75 percent of their funding comes from. He admits that there are plenty of animals worse off, but the notion always comes back to the koala.

What seems to bother many workers here is that an iconic animal is in an ominous position. They treat thousands of rainbow lorikeets, but their numbers are fine. They treat birds of prey, lizards, and any number of assorted creatures. But almost every day, it’s the koala that gently slumps onto the barren floor, that gnaws on a gumleaf, that hiccups wearing a tiny anesthetic mask.

Elephant Roadkill: Thailand Grapples With Pachyderms on the Pavement