In 1996, only five years after the end of the Cold War, the United States and its allies made up all five of the most industrious creators of scientific knowledge. This past January, however, China made headlines as its publication rate surpassed that of the United States. According to the National Science Foundation and MIT Technology Review, China published 426,000 research papers in 2016 compared to the 409,000 published in the United States.

U.S. leadership in scientific research since the turn of the 20th century allowed it to be the first to develop the nuclear bomb and land a man on the moon. Its innovative technological research and development unequivocally boosted the U.S. economy. But the gap between the United States and the rest of the world is quickly closing, especially with the recent rapid growth of Asia’s research capacity.

To help understand the extent of Asia’s ascent, I used a novel dataset amalgamated from SCImago and standardized by country by year, using scientific output by country as a proxy for a country’s technological capability. The primary metric I use is citations: The number of times a certain paper is referenced by other papers (generally the more citations a paper accrues, the greater its influence). Instead of using total documents produced, I use a country’s relative citation rank vis-à-vis the rest of the world, because not all documents have the same level of innovation and impact.

Looking the citation rankings for the top 15 countries, China’s meteoric rise since 1996, the first year included in the dataset, is clear. So too are India and South Korea’s leaps. Perhaps most notably, many of the “old powers” of the 20th century were displaced in the reshuffling of the country rankings: The United Kingdom, France, and Italy all fell at least one position. 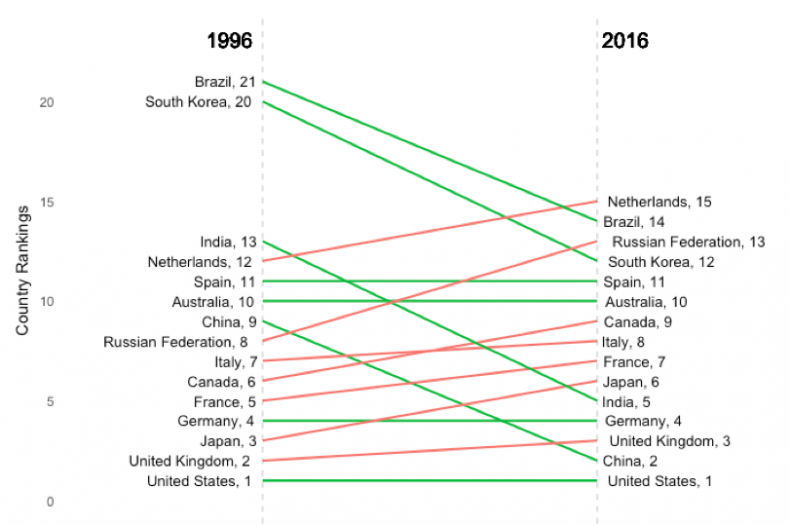 America’s grip on scientific superiority has long been a byproduct of a diverse ecosystem of universities, think tanks, and private corporations churning out knowledge. Fueled by a mixture of public and private funding, the United States could afford to bring in talent from abroad. The heyday of this phenomena might have been the post-World War II era. Because of peace, stability, and financial opportunity, the best intellectuals of the world flocked to the United States (though many also immigrated in the years directly preceding the war). In the post-war period at the Institute for Advanced Study alone, luminaries like Veblen, Einstein, von Neumann, and Gödel (just to name a few) resided. But the post-WWII allure of the United States has begun to fade as more countries around the world offer high research budgets, increased grant opportunities, bright students, and academic tenure.

One measure of government funding is provided by the World Bank through its dataset on research and development expenditure per country as a percentage of GDP. By this metric, in 2015 Israel, South Korea, and Japan led the world at 4.3 percent, 4.2 percent, and 3.3 percent respectively. The United States ranked 9th by percentage (though first by total expenditure) while China ranked 14th with 2.1 percent, though this was a marked increase from the 0.6  percent it spent in 1996. 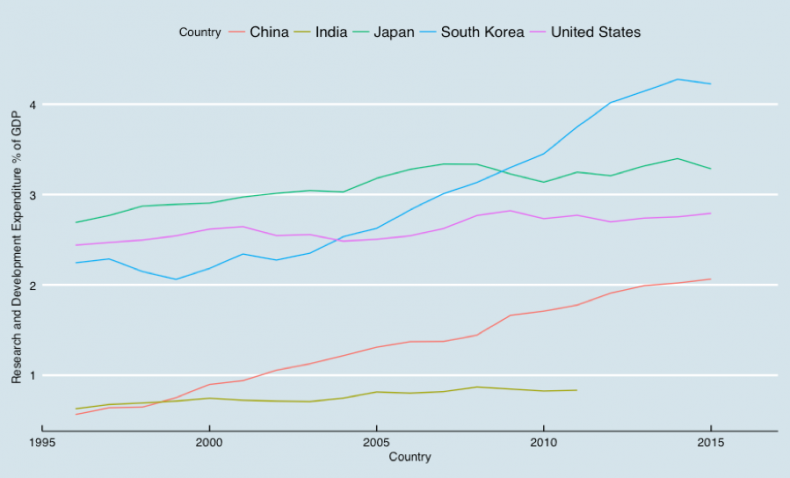 The increased expenditures help explain the rise of Asia’s overall citations. The charts below show total citations by continent in 1996 and 2016. Whereas North American citation counts dipped relative to other continent’s gains, European and especially Asian citation counts rose dramatically. In a virtuous, reinforcing cycle, as Asian universities gained prowess and citations they in turn could recruit more industrious and prolific researchers, scientists, and professors. These new hires concurrently produced more scholarship while also educating the next generation of scholars. 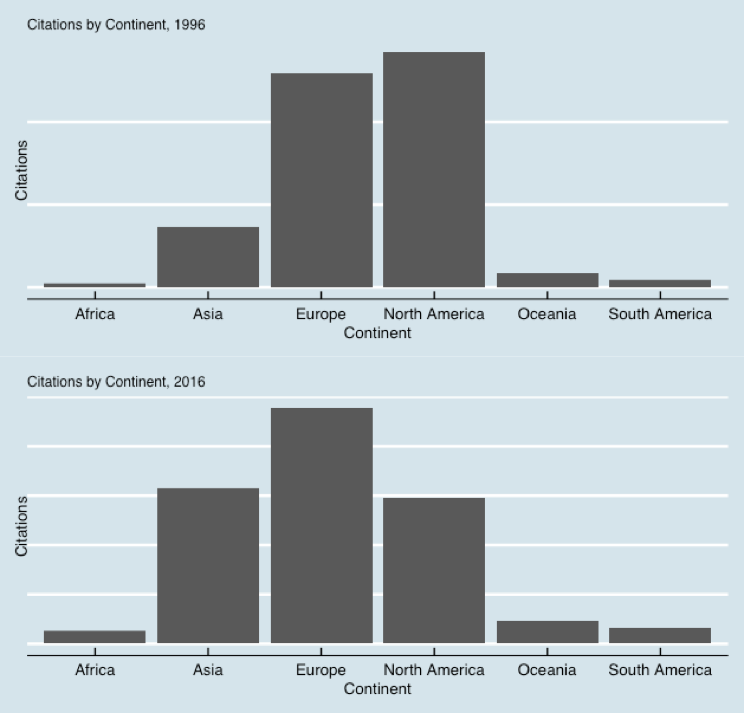 Asia’s research increase bears important implications for future economic and military paradigms. First, a strong research base allows countries to independently create technology, allowing not only for exports in the long run but also for short-term military applications. A report from the bipartisan Commission on the Theft of American Intellectual Property attached a figure of between $225 billion to $600 billion to the total stolen secrets, pirated software, and counterfeiting of U.S. intellectual property and goods by China. Growing its research base is a strategic way for China to continue striving for economic and military parity with the United States. For other states such as India and South Korea, achieving independent regional power will originate from a strong academic base.

For the United States, growing STEM (Science, Technology, Engineering, and Math) movements, currently backed both by technology corporations and public-sector departments, could help buck the recent trend and help the United States maintain its scholastic superiority. Women in STEM programs could help overturn a pervasive gender disparity in STEM fields, and could especially bolster U.S. output. The importance of sustained government funding for American scientific advancement also shouldn’t be overlooked. The Defense Advanced Research Projects Agency (DARPA) alone is responsible for the financing of seminal technologies including the internet, GPS, and wireless communication chips.

Economic performance and military arsenals are excellent ways of gauging a country’s current capabilities, but when analyzing future trends and capabilities, research outputs are a widely underutilized measure. Judging purely based on the statistics presented in this article, China, India, and South Korea appear poised to continue their upward trajectories.

The US Must Counter China’s Malign Agenda

China poses a threat to the U.S. and the world.

US Travel Industry to Chinese Tourists: What Trade War?

The U.S. travel industry is redoubling its efforts to engage with Chinese tourists while waiting out the trade war.

The Development of K-Pop Without China

China is one of the world’s largest markets; but K-pop continues to be a global phenomenon without it.

Gotta Serve Somebody? Not Necessarily: Europe in the US-China Crossfire

The EU can carve out its own position vis-a-vis the United States and China.

The ROK’S “Smart Navy” is a vital project, but will require more than just new technology.

Amid a public trust crisis sparked by the new coronavirus, the 'SARS hero' has been tasked to reassure us it’s going to be okay.

Serious concerns about corruption, ease of doing business, and political interference scare foreign investors away regardless of credit rating scores.

Central and Eastern EU member states are in general vulnerable given the financial constraints at even the leading universities.

Without reform of its centralized political system, Afghanistan will remain mired in factionalism and civil conflict.

Could the double-whammy of the coronavirus and a flagging economy finally end Shinzo Abe’s record-breaking term as prime minister?