What a different two years makes.

In late August 2016, I wrote an article titled “Who Is Skipping the World Nomad Games?” That “who” was Uzbekistan, which had officially participated in the first World Nomad Games in 2014 but its flag had been removed from the website of the second iteration. While there were ultimately Uzbek athletes at the games, the country’s omission from official list at the time served to underline a souring relationship between the two states.

Two years on, according to the Kyrgyz, Uzbek President Shavkat Mirziyoyev is scheduled to attend the opening ceremony of the third World Nomad Games on September 2 in addition to the presidents of Turkey, Azerbaijan, Kazakhstan, and the prime minister of Hungary.

When that article mentioned above was published I was en route to Kyrgyzstan to take in the plethora of important events concentrated in late August and early September. As I wrote then:

The next few weeks in Kyrgyzstan are packed with notable events: the country’s 25th independence anniversary is August 31, the second World Nomad Games are September 3-8, and on September 17-18 the Commonwealth of Independent States will hold a summit in Bishkek. Kyrgyz President Almazbek Atambayev will celebrate his 60th birthday on the first day of the CIS summit and is expected to drop an album.

While Atambayev, as far as I can tell, never dropped that album, there were additional  unexpected events which have proven critical in the ensuing two years. None more so than the death of Islam Karimov.

On August 28, 2016 Uzbek officials confirmed that President Islam Karimov had been hospitalized. By September 2, Karimov was dead. According to the official record, Karimov died on September 1, which also happened to be Uzbekistan’s 25th independence anniversary.

The Nomad Games went on as planned. During the parade of participating nations on opening night, a woman bearing a sign reading “Uzbekistan” strode across the hippodrome in Cholpon-Ata. None marched behind her, except perhaps the ghost of Karimov. Organizers explained that the team was absent for mourning as the ceremony was the same day as Karimov’s funeral. 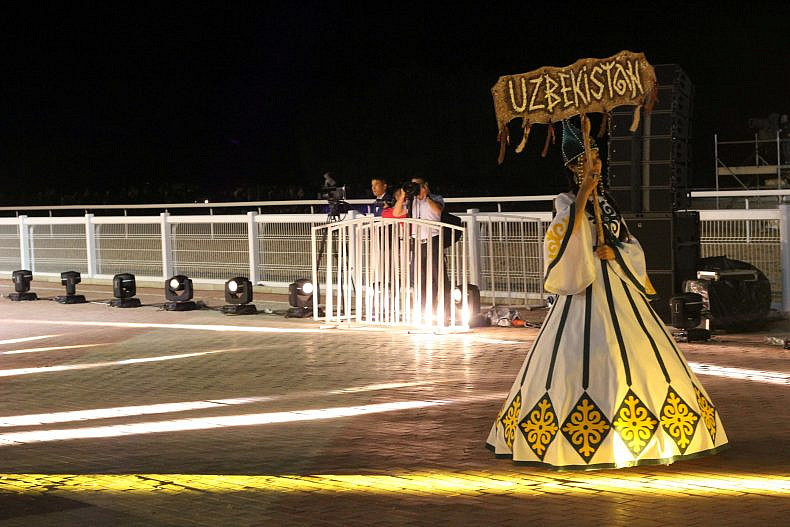 Other countries had Kyrgyz volunteer stand-ins (always in yellow shirts) to walk for absent athletes but team Uzbekistan was absent in full for mourning. Photo by Catherine Putz.

Relations between Uzbekistan and Kyrgyzstan at that time were tense. On August 23, as both Kyrgyzstan and Uzbekistan looked toward their independence anniversaries — August 31 and September 1, respectively — Tashkent closed the border. The day before, according to the Kyrgyz Border Service, seven Uzbek border guards landed via helicopter on Unkur-Too, a mountain with a Kyrgyz government radio tower on a disputed section of the border. They detained four Kyrgyz workers. The mountaintop kerfuffle and border closure illustrated the poor state of relations between Bishkek and Tashkent.

On September 8, the day the Nomad Games ended, Uzbekistan’s Prime Minister Shavkat Mirziyoyev had been confirmed as interim president. On September 9, the four Kyrgyz workers were released by Uzbekistan. While Mirziyoyev did not attend the CIS summit in Bishkek, he withdrew Uzbek forces from the contested mountain and pushed officials earnestly into border demarcation talks with their Kyrgyz counterparts.

Flash forward two years: Mirziyoyev is president and set to attend the opening ceremony along with the presidents of Turkey, Azerbaijan, Kazakhstan, and the prime minister of Hungary. Border talks continue and recently made marked progress by agreeing to swap a Kyrgyz exclave to Uzbekistan in exchange for contiguous territory. Kyrgyz officials have said that the plan is to complete the delimitation of the Kyrgyz-Uzbek border (i.e., agreements in principle regarding the border) this year and start the demarcation process (the actual physical surveying, mapping and marking) in 2019.

Back in 2016, the opening ceremony’s most notable guests were Turkmen President Gurbanguly Berdimuhamedov, the CEO of Gazprom, and Steven Seagal and an estimated 25 percent of the border remained un-delimitated.

The increased attendance of high-profile political figures certainly raises the stature of the games — which Kyrgyzstan envisions as bringing the larger Turkic world together — but also underscores the strengthening of regional cooperation efforts. Similarly, progress on setting and marking the border reflects an improved climate for cooperative endeavors whether negotiations or festivals.

What a difference two years can make.

Uzbekistan Gears Up to Celebrate Independence... by Shutting the Kyrgyz Border

Nothing says happy birthday like shutting out the neighbors.