Few regions embody the modern currents of Sino-Russian relations better than the Heihe-Blagoveshchensk border. As recently as 1969, this border region was a battleground in a border war between the two countries and a source of deep mutual mistrust. Fast forward almost 50 years, and it has seemingly been transformed into a picturesque backdrop for the two countries’ mutual détente. Heihe, situated along China’s 4,200 km border with Russia, sits dramatically opposite its Russian counterpart, Blagoveshchensk, the two cities divided only by the river that meanders between them, known in Chinese as the Heilongjiang and in Russian as the Amur.

The tourists that do venture into China’s northeast tend only to go as far as Harbin, site of the provincial capital’s annual ice festival. But what drove me to Heihe, a further 10 hour train ride from Harbin, was the near completion of a cross-border joint infrastructure project, sold as the missing link in China’s Silk Road Economic Belt. The missing link in question is a highway bridge – the first of its kind – that will connect China’s northeast with the Russian Far East (RFE). The 1.28 km cable bridge will form part of a larger 19.9 km highway, one-third of which is being built on the Chinese side. Construction officially began on the bridge in December 2016 and is expected to be completed by October 2019, costing the two nations a total of 2.24 billion Chinese renminbi ($322 million).

Until now, border crossings between Heihe and Blagoveshchensk have been conducted by ferry; a method of transport invariably described by ambivalent locals as an inefficient way of getting between the two cities. In winter, when the river freezes over, ferry crossings become even more irregular. In years gone by, opportunistic Chinese and Russian day-trippers would use the ferry to bring suitcases full of foreign goods back and forth between the two regions. But today, the Chinese and Russian governments have their sights locked on bigger bilateral business opportunities in the region. According to Chinese state media, the bridge is expected to contribute to a ten-fold increase in cargo turnover between the two countries, and double the number of annual cross-border passengers by 2020. 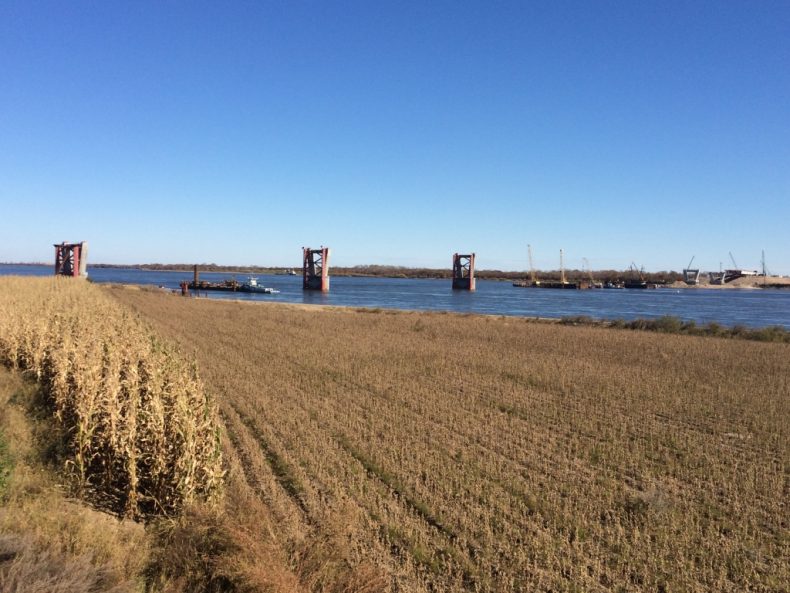 Like almost all domestic and international Chinese infrastructure projects nowadays, this bridge has been marketed as a flagship project of the Belt and Road Initiative (BRI). Once operational, the bridge will serve as a vital cog in the China-Mongolia-Russia Economic Corridor (CMREC). Signed into being in 2016, CMREC consists of an as-yet uncompleted railway and road network passing from Tianjin, China, through Ulaanbaatar, Mongolia, before arriving to Ulan Ude in Russia.

Yet away from all the pomp and ceremony in the media, the BRI has a long way to go before it becomes a household name in Heihe. While almost all of the locals I encountered were aware of the bridge and its upcoming completion, practically none associated it with the BRI. This is likely because the original agreement to construct the bridge was actually signed in 1995, when Boris Yeltsin and Jiang Zemin were in power. Like so many other Chinese infrastructure projects, this 24-year old joint venture has been subsumed into the all-encompassing narrative of the BRI. For this reason alone, it is hardly surprising that local people fail to draw the connection between the much-delayed bridge and the BRI. This illustrates a common criticism of the BRI: it is a top-down initiative, which means very little in practical terms to the very people based around these projects who will supposedly benefit most from them.

For a bridge that has garnered so much media attention in recent years, locating its whereabouts proved to be a surprisingly difficult task. This was compounded by a lack of consensus amongst residents about the name of the bridge itself. Whereas some referred to it as “The Great Sino-Russian Bridge,” others confused it with the “Heihe Island Bridge,” another bridge in Heihe city center itself. For those inclined to dig around enough, an online regional government press release christens the bridge as the “Heihe-Blagoveshchensk Heilongjiang (Amur) Bridge,” located just 7 km east of Heihe’s city center, in Changfa.

In the end, I stumbled onto the bridge’s location through a chance encounter with a local hostel owner who was kind enough to arrange a short taxi ride there and connected me with the manager of a construction company working on the bridge itself. As we approached Changfa, chic and shiny bilingually translated street signs guided us toward the bridge. On exiting the taxi, the driver made it clear that staff and security at the bridge might not take kindly to a local — let alone a foreigner — visiting the bridge and taking photos. Perhaps fortunately, on that day workers were few and far between, save for the one security guard whose nap I rudely interrupted in my quest to get a closer look.

Request denied, I circumvented the main viewing area and found a more distant view of the bridge a couple of hundred meters away. Although there were few workers around, a quick comparison between the bridge today with photographs from earlier in the construction process showed that, at least on the Chinese side, some progress has been made. Comparatively, on the Russian side of the bridge progress seemed significantly further behind. Whether the bridge will be completed on time remains to be seen. 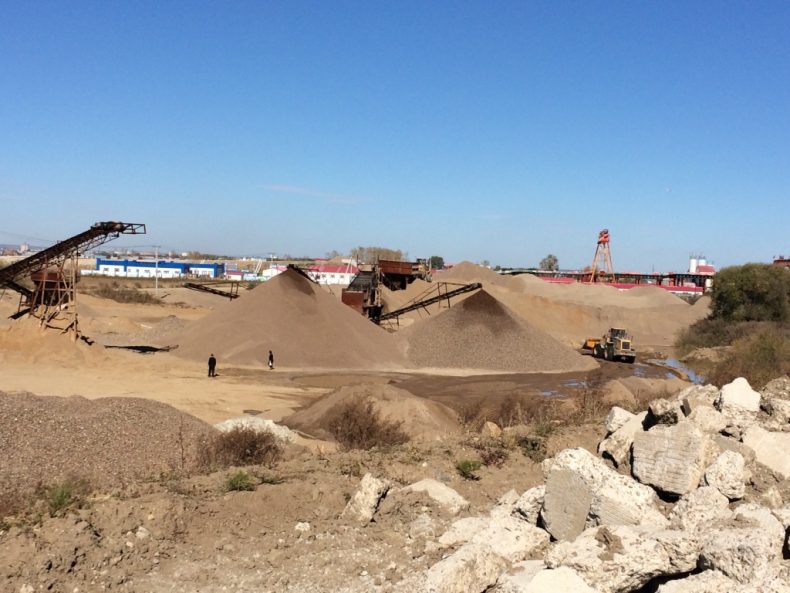 Construction progresses on the Chinese side of the bridge. Photo by Ankur Shah.

But if few locals could locate the bridge, even fewer still could offer concrete details regarding its completion date or whether it would be open only to automotive transport or rail cargo. The only conclusion everyone seemed to agree upon was who should be held responsible for the bridge’s perpetual delay: the Russian side.

The aforementioned manager simply and politely described his Russian partners — with whom he holds monthly meetings — as “slower” than his local staff. Others more broadly attributed the multiple delays to a lack of financial capital on the Russian side, a viewpoint that has been reinforced by Heihe’s relative development in recent years in comparison to Blagoveshchensk. The fact that the Chinese side has constructed their portion of the bridge so much more quickly than the Russian side supports the regularly levelled observation that Sino-Russian relations are asymmetrical and imbalanced.

This view is supported by many Russian experts who agree that Sino-Russian projects on the border have been slow to materialize, owing largely to regional bureaucracy and financial constraints on the Russian side. Indeed, the fact that this bridge may actually see the light of day bucks the trend, which has seen so many other joint ventures signed between the two countries confined to paper. Tellingly, a nine-year long program of cooperation between China’s northeast and the RFE and Siberia ended this year with very few concrete results to show for itself. Symbolically then, the completion of the Heihe-Blagoveshchensk would be tangible, though long overdue, evidence that concrete outcomes between Xi Jinping and Vladimir Putin’s flagship foreign policies are achievable. Russia has so far received a total of $46 billion* in BRI funding, and the success of this cross-border bridge could yet see further Chinese investment in the RFE under the guise of the BRI.

Yet, in Heihe, there was little sense that this bridge would have a large impact on the everyday lives of local residents or the business prospects of local entrepreneurs. Whereas state media claims that bilateral trade between China and Russia will this year exceed $100 billion, the local Chinese business owners I met painted a bleaker picture of the steeply declining numbers of Russian tourists visiting the city. They frequently remarked on the reduced number of businesses engaged in cross-border commerce on the Russian side. From the perspective of Heihe’s business community, sanctions have noticeably affected their Russian counterparts and with tourists the most visible sign of economic ties between the two cities, the declining number of Russian visitors is palpable. 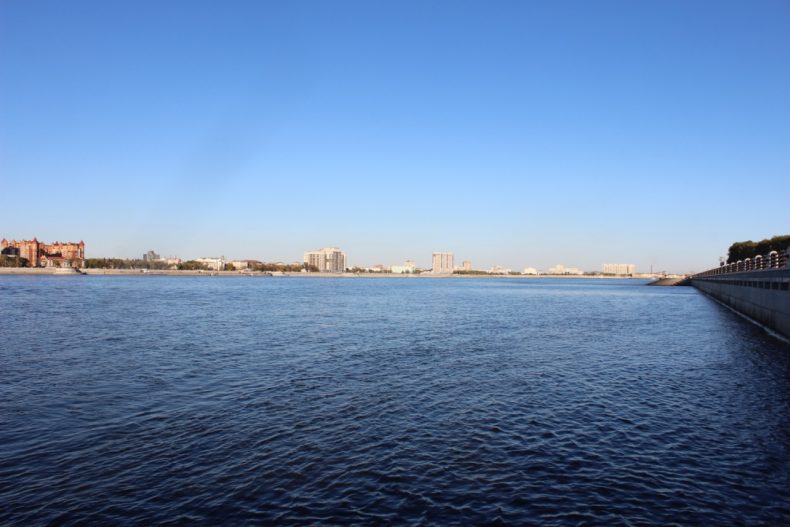 A look across the Amur River to Blagoveshchensk. Photo by Ankur Shah.

With so much uncertainty surrounding the bridge’s function, the level of excitement in Heihe regarding the bridge’s near completion was underwhelming. Despite the lofty bilateral trade figures touted by the Chinese government, and significant press under the guise of the BRI PR machine, few locals were optimistic that the bridge to Blagoveshchensk has the capacity to change this downward trend. In this sense, it seems that even if the bridge is built as expected next year, its overall impact on local residents may be limited.

What is for sure, however, is that the bridge will continue to provide plenty of hot air in the Sino-Russian media, complementing the narrative that the BRI will galvanize cross-border trade, cooperation, and connectivity. One has to wonder, however, if this will indeed be a bridge of friendship, or simply a bridge to nowhere.

Ankur Shah is a National Geographic Young Explorer and a Yenching Scholar of Peking University. He previously studied Chinese and Russian studies at the University of Edinburgh.

*An earlier version of this article misstated the amount of BRI funding.

COVID-19: Trouble on the China-Russia Border

In the short term, the tangible support that China can provide to Russia is limited, but the strategic implications are more profound.