Suifenhe is a county-level city on the eastern edge of China’s 4,300-kilometer border with Russia. It is 2,000 km away from Wuhan, where the COVID-19 crisis began late last year, and until recently, the epidemic may have felt quite distant.

Locally, Suifenhe is best known for a series of increasingly extravagant national gates in its land port, which are designed to project China’s progress over recent decades, in the face of Russia’s simultaneous decline. During the current pandemic, however, this land port was repurposed as a collective quarantine site for 1,479 Chinese citizens.

This is the result of the hasty return of Chinese citizens domiciled in Russia, which has seen Suifenhe replace Wuhan as the new focal point in China’s domestic struggle to contain COVID-19. As of April 20, 2020, almost 2,500 nationals had re-entered China via the city’s land port. Of them, 377 were diagnosed with COVID-19, with 27 designated as “asymptomatic” cases in China’s terminology.

Most of these Chinese nationals left Moscow by flight, transiting through Vladivostok en route to Pogranichny, which borders Suifenhe. The precise source of their urgency to leave Russia is unclear. According to a state newspaper, Chinese businessmen spread rumors online, encouraging their compatriots in Moscow to flee the country. It is likely that they felt that China was a safer option than Russia to weather the crisis.

This was a perilous journey. It involves a nine-hour flight to Vladivostok followed by a two-hour overland journey to Pogranichny, all in confined public spaces. Those that made the trip were almost certainly aware of the risk, but it was not enough to put them off. The exodus of Chinese citizens from Moscow was so notable that rumors circulated that Russia was expelling all Chinese nationals in the country.

The situation has put Chinese authorities in a difficult position. In the first week of April 2020, Beijing allowed a high number of these citizens into Suifenhe, inviting what some have feared will become a second wave of cases. With a population of less than 80,000 people in the city, these imported cases quickly overwhelmed local public health resources.

As a result, on April 7, China felt that it had no choice but to close the border, shutting out its own citizens in an effort to buy more time. Suifenhe’s hospital system was reportedly on the brink of collapse, and with hotels for isolation already all occupied, Beijing feared that an outbreak in the city could derail nationwide containment efforts.

Yet, in leaving hundreds of Chinese nationals stranded just across the border, China has risked spreading the virus throughout communities in the Russian Far East. Even Chinese state media reported that the two countries appeared to be in discord over the border closure.

In a bid to ease tensions, the Chinese consul general in Vladivostok personally wrote a letter to all Chinese citizens in Russia, apologizing to those left high and dry in the Primorsky Krai region bordering Suifenhe. He urged them to not make the trip east from Moscow, and pleaded with those already there to remain in quarantine and avoid trying to cross the border.

Ironically, on April 11, days after China closed the border, Beijing seized an opportunity to lend Russia a helping hand. A group of Chinese medical specialists flew from Heilongjiang province to Moscow, carrying several tonnes of masks and medical equipment. Designed to divert domestic attention away from Suifenhe, the gesture had an unexpected consequence. It led Russian nationals to criticize their own leaders, who just last month sent a military convoy carrying medical equipment to Italy, yet remained in dire need of China’s assistance.

The Chinese cargo was decorated with the words of Russian poet Alexander Pushkin, “Bсё мгновенно, всё пройдет,” which translates as, “All is fleeting, all will pass.” Residents in Primorsky Krai may not be so optimistic. With no modern infectious disease clinic, their region is gravely unprepared to deal with COVID-19. Authorities hope to use an unfinished hospital in Vladivostok to meet this need, but they must first await necessary funds from the central government in Moscow. The entire process could take a year and a half to complete.

By then it may already be too little, too late. By May 2, Primorsky Krai had reported just 455 cases of COVID-19. As with Russia’s overall numbers of confirmed coronavirus cases – as of May 5, over 155,000 cases and 1,451 deaths — the figure seems suspiciously low. This is fueling well-grounded cynicism that the true number of cases is much higher, and that a looming health crisis awaits the region.

Prior to the border closure, Oleg Kozhemyako, governor of Primorsky Krai, urged Russian President Vladimir Putin to ban all Chinese citizens from taking domestic flights that transited through Vladivostok. His warning was ignored. Kozhemyako now fears for those Russians who flew in alongside their Chinese peers, and the impact of the Chinese citizens who are left stranded in the area. He anxiously admits: “People are simply afraid…We now expect an increase in the number of patients with coronavirus in the region.”

Beijing must be wondering why Kozhemyako’s request was denied. Moscow’s decision to allow Chinese citizens to break lockdown regulations, travel to the airport, and even board domestic flights, is puzzling. It has significantly escalated the threat of an outbreak in both Russia and China.

Russia’s internal confusion, however, has not clouded Beijing’s capacity to introduce drastic measures in Suifenhe. Within days of closing the border, a 600-bed makeshift hospital was constructed in a converted office building, and six additional buildings were designated to isolate and observe potential COVID-19 patients. Local authorities quickly assembled an 800-member voluntary team to assist the 400 incoming medical staff who will be stationed in the city. China is preparing for the worst.

All returning citizens to Suifenhe must also undergo a 28-day quarantine. As in Wuhan, essential shopping can now only be carried out by one member of the household every three days. The Chinese government is even offering 5,000 RMB ($700) rewards to locals who report illegal border crossings. The draconian response from Beijing has prompted Chinese netizens to refer to Suifenhe as “Little Wuhan.” Unlike Moscow, Beijing is taking no chances.

The difference between China and Russia’s efforts to ease the mounting pressure building at their border is telling. Primorsky’s administration has appeared defeatist, passively awaiting and accepting its fate. Heilongjiang, by contrast, has been decisive, if at the expense of its residents across the border. It illustrates what analysts describe as an asymmetric and unequal power dynamic between China and Russia. 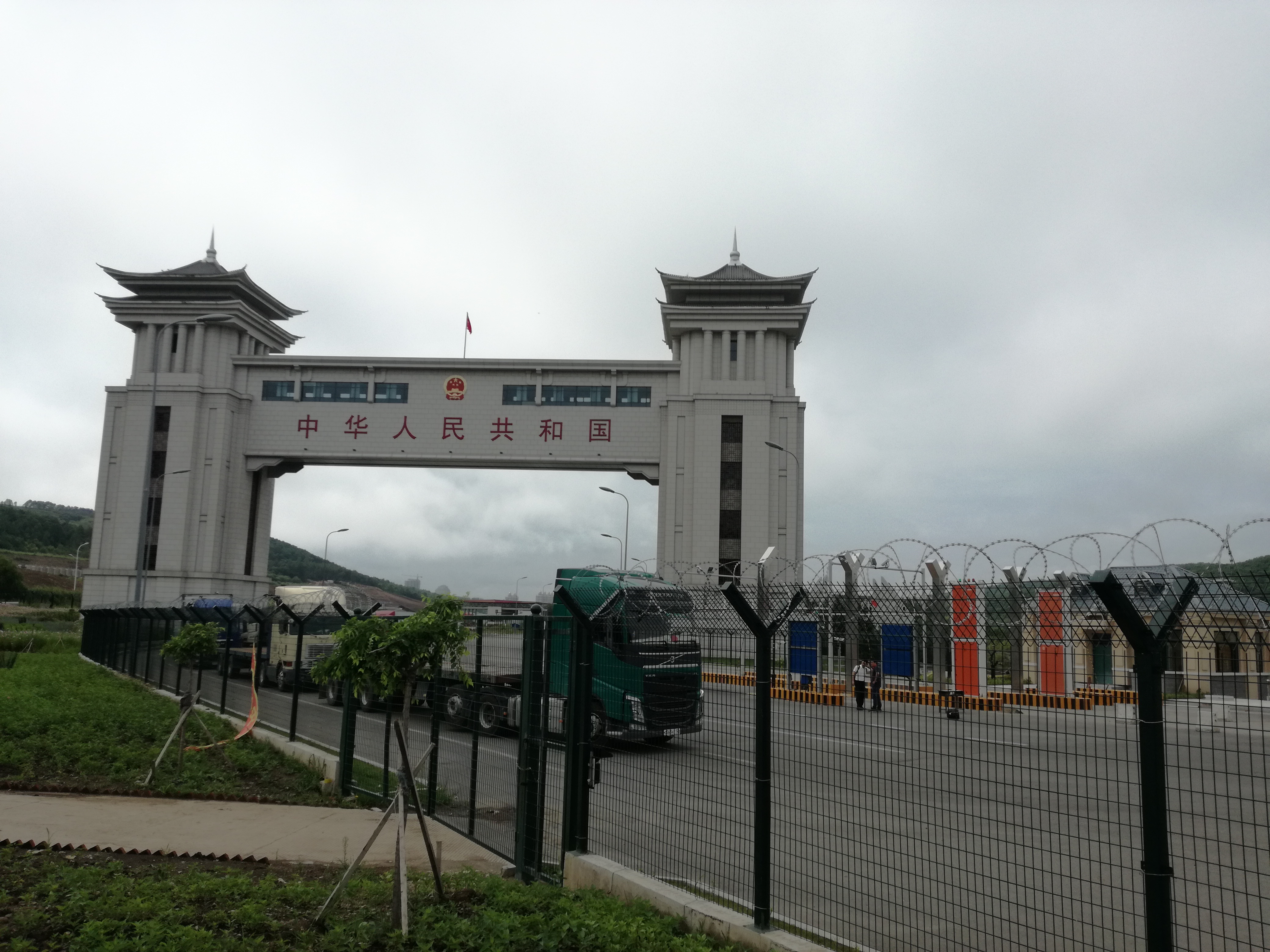 The national gate on the Chinese side of the Sino-Russian border at Suifenhe. Photo by Ankur Shah and Vivek Pisharody.

The backdrop to the tense negotiations on the border’s reopening is Suifenhe’s land port. In it stands a glass-bottomed national gate, towering over the minuscule customs facility in neighboring Pogranichny. In ordinary times, it quite literally gives Chinese visitors a chance to look down on Russia. It will be the first sight they see when they eventually re-enter their homeland.

The fate of these citizens, and the vulnerable communities across the Russian Far East, now rests upon how well the two countries can jointly manage the border’s reopening. As pressure builds in Primorsky, it may not be able to accommodate Beijing’s efforts to buy more time for Suifenhe. Yet a resolution that benefits both sides equally seems just as unlikely.

Ankur Shah is a British Indian writer focused on China and Russia. He has written for the Economist, Foreign Policy, and the Center for Strategic and International Studies.

The Belt and Road After COVID-19

In Italy, China is no longer thought of as the origin of COVID-19, but as a friend in a time of dire need.

How Will the Coronavirus Outbreak Affect Russia-China Relations?

China, Russia, and the Case of the Missing Bridge

A bridge, a border, and the Belt and Road: a trip to where China and Russia meet.