Nisha Ayub is a transgender woman who defends the rights of her community with an extraordinary strength. In fact, when you know her, it is hard to believe that, in the past, she tried to take her own life.

Around 19 years ago, when she was 21, Nisha was sent to a men’s prison for three months for wearing women’s clothes to match her gender identity. That’s a crime under the strict Sharia laws in Malaysia, which make it illegal when “a man dresses or acts like a woman.” In prison, she faced difficult moments, including being assaulted by the prison director and some other inmates.

When she was released, Nisha founded the SEED Foundation (or Pertubuhan Kebajikan dan Persekitaran Positif Malaysia) and the collective Justice for Sisters in order to protect transgender people and try to change the laws that target them. In 2016, she became the first transgender woman to receive the prestigious U.S. “International Woman of Courage” award, becoming the inspiration of many others.

Nisha said that transgender people in Malaysia are always living with fear. “Can you imagine being worried every day when you leave home because you can be arrested and go to jail? Believe me, the prisons here are terrible,” she explained in her office at the SEED Foundation. It is located in one of the most marginal neighborhoods of Kuala Lumpur, where she receives all the people who seek her advice and help.

Trans people in Malaysia are seen as “deviants” who live against the norms of society. Government officials and many religious leaders have fueled transphobia and homophobia for years. Even former Prime Minister Najib Razak said that LGBT people (referring to lesbians, gays, bisexuals, and transgender people) are enemies of Islam, along with liberalism and pluralism.

The social influence of Islam continues to grow. Even though Malaysia is a secular country, the constitution grants states the authority to define crimes and punishments for Muslims in matters that are not covered by the federal law. This means that Muslims, who represent around 60 percent of the population, are judged under Sharia, or Islamic law, which criminalizes transgender people.

In theory, Sharia applies only to Muslims, but in practice, its rules can potentially affect the broader population as well. People of other religions can also be arrested under a vague provision that prohibits “public indecency.”

One of the consequences is that trans people have lost their most basic rights and are finding more and more problems. For example, previously transgender individuals could undergo gender reassignment surgery, but after the introduction of a fatwa (a religious edict) regarding sex changes, few surgeons are willing to offer this service.

People who want to undergo this operation must leave the country, and for many of them, the price is simply prohibitive. Even for those who undertake the expense, upon their return to Malaysia, they are still not recognized because they cannot change the sex on their identity documents. This problem accompanies them for life when it comes to looking for work, opening a bank account, or living in society more generally.

The government in Malaysia changed in 2018, when the opposition defeated for the first time the political coalition that had remained in power for six decades. Hopes were high for a “New Malaysia” marked by greater respect for human rights. But the activists consulted for this story believe that the rights of transgender people have not improved at all – and have arguably gotten even worse.

Phil Robertson, deputy director for Asia of the organization Human Rights Watch, said that this is because “ministers are actively trying to defend themselves from political attacks by the opposition UMNO and PAS parties, who claim the government is supporting LGBT people. “

The result, he said, “has been a rapid, competitive de-escalation of any sort of respect or tolerance of LGBT rights in Malaysia. LGBT groups are now not welcome to meet with government ministers, the prime minister refuses to respect rights for LGBT people, and the tourism minister goes one step further by publicly claiming such people don’t exist in the country.”

In addition, in September two women, aged 32 and 22, received six lashes for having sex with each other.

Thilaga Sulathireh, researcher at the Justice for Sisters collective, shared Robertson’s ideas. She said that the current government’s views in relation to transgender people are “a continuation of the previous administration’s policy, which had introduced a five-year government action plan to address some ‘social ills’ [including LGBT identities].”

Thilaga explained that this project focuses on several programs: rehabilitation (with therapy available for transgender people), prevention (with seminars for parents and peers), and compliance with laws (prohibiting the “glamorization” of their lifestyle publicly). In general, the government feels that LGBT people should return to the “right path,” conform to binary categories, and suppress their sexuality. 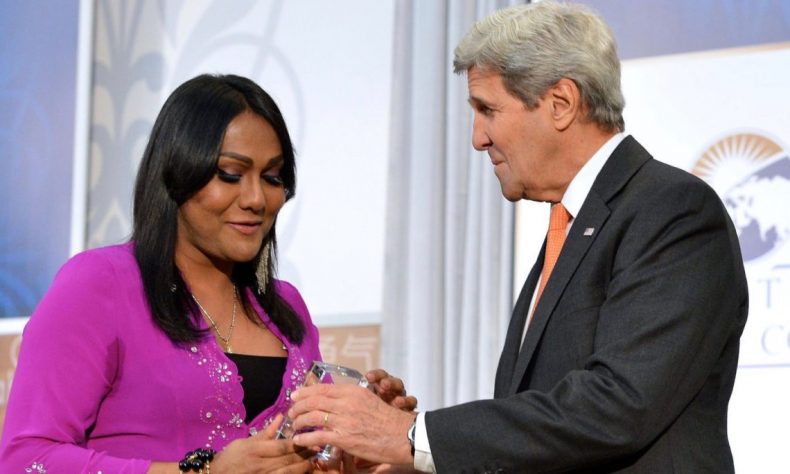 Despite the difficulties, Nisha has maintained her struggle over the years. Her organization, the SEED Foundation, has become a space free of discrimination for many transgender people, where they receive counseling, health care, and training.

From the collective Justice for Sisters, Nisha and her colleagues are doing mainly advocacy. On some occasions, they also raise funds to finance court cases that have been filed against trans people who have been accused by the Sharia court.

In 2014, the collective achieved a remarkable feat when the Court of Appeals upheld the group’s legal challenge to a state Sharia law, ruling that it was discriminatory and unconstitutional. But one year later, the Federal Court reversed the ruling, a major setback for the rights of transgender people.

Nisha also believes that her recognition as a “woman of courage” has helped both her and the community in many ways: “Internationally, because they have never before awarded a transsexual person. Locally, because in Malaysia many people started talking about it and wanted to have more information about us.”

She said that what moves her to do her job is the desire to help her community: “When I listen to their stories, I think I should to something. I believe that my strength comes from the support I have received from them. I will always do advocacy because this is my passion.”

The Indonesia-based Coalition of Sovereign Migrant Workers claims that 149 people have died in detention facilities over the past 18 months.

Malaysia Abolishes Mandatory Use of the Death Penalty

While falling short of a total ban on capital punishment, the move is a rare sign of progress for Southeast Asia.

Has the Paint Dried on Malaysia’s Protest Art?

Kuala Lumpur may have concerns about the Belt and Road, but Chinese projects in Melaka are continuing apace.

According to the Indonesian leader, Vladimir Putin has promised to open a sea route to allow exports of food and fertilizer from Ukraine.