The sun occasionally peeked through the clouds over a sea of cameras and Japanese flags and shone on the crowd packed arm to arm. We waited in anticipation as security combed the grounds and ushered us behind barriers on the outer grounds of the Imperial Palace. Here, approximately 250 meters from Nijubashi Gate, was the closest the public could come to witnessing the regalia inheritance, a ceremony that occurred within the sanctity of the palace walls attended by a few hundred Japanese and foreign diplomatic elite. Though I was not the only American, I was one of the few out on the imperial grounds to witness the ascension of Japan’s Emperor Naruhito.

Naruhito’s car, a large and regal Toyota with silver trim bearing a small red flag adorned with a yellow Chrysanthemum over the headlights, steadily crossed the famed Nijubashi Bridge, as it left the inner confines of the Imperial Palace. The car proceeded slowly, escorted by police cars and motorcycles. The faint figure of the new emperor raised a hand and waved to the public. The crowd waved back with small flags that rattled in the wind. The moment was anticlimactic, absent of loud chants, shouts, or a flashy vehicle, even as the Reiwa era officially commenced on May 1. 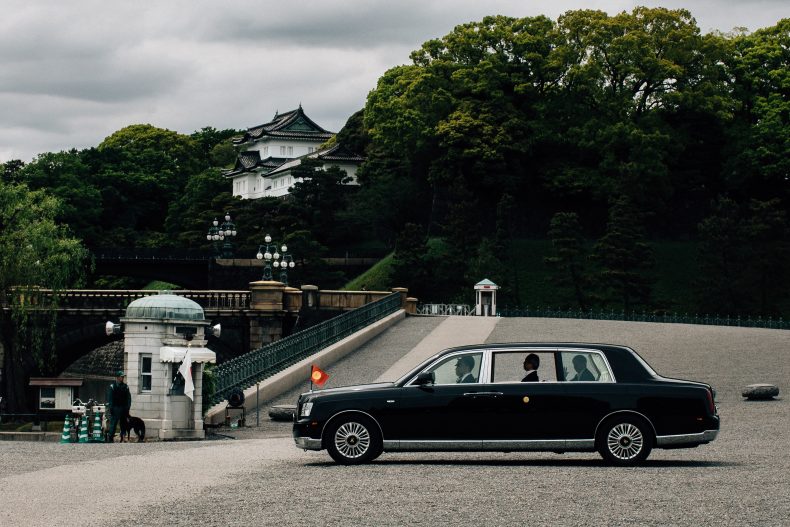 During my time as a student at the University of Tokyo, I’ve leaped at the chance to participate in historically significant moments. Thousands of Japanese citizens flooded the imperial grounds on the days of abdication, regalia inheritance, and first public appearance to witness the historic moment of transition. Like his father Akihito, Japanese society has almost unanimously welcomed the newest emperor; Naruhito’s approval rating reached 83 percent in the days following his ascension, and 140,000 attended the emperor’s first public appearance on May 4.

Unlike the last transition in 1989, which followed the death of Emperor Hirohito and was marked by mourning and grief, the recent transition was the result of abdication and has thus been exceptionally celebratory, buoyed by the unusual 10-day holiday granted to many Japanese workers. Naruhito, the first emperor to have studied abroad and been born in the post-war era, embodies the continuation of the genial element to the symbol that began with his father.

“The new emperor is closer to the people,” noted a middle-aged man from Nagoya. 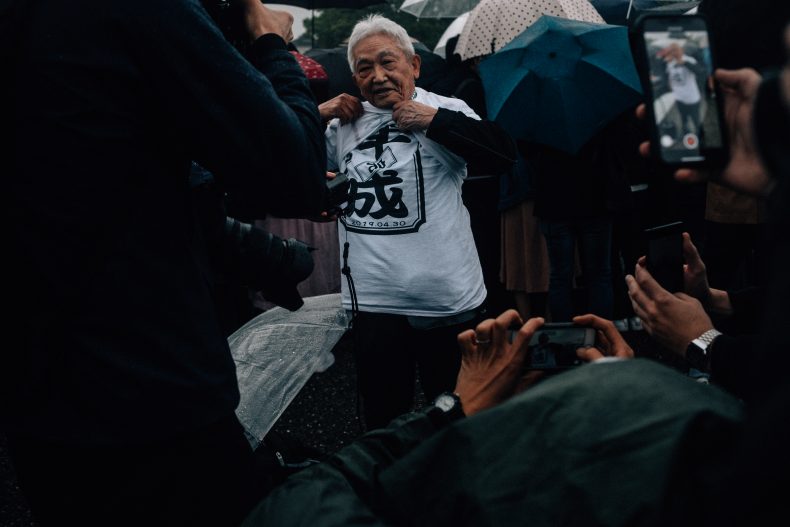 Japanese support of their centuries-old imperial tradition is an exception in a nation where displays of nationalism are seldom seen and often negatively perceived. Support is not to be mistaken for ecstatic nationalism, but rather personifies a broad, ambiguous acceptance of the imperial system. As an undergraduate student at Waseda University in Tokyo noted, acceptance of the system emanates from a belief that “there are no negative consequences or impacts on our society” as a result of the emperor system.

Nationalism is typically associated with the uyoku dantai, Japan’s hyper-conservative, militaristic far-right. Their displays sometimes subdued, but often brash and invasive, are most commonly encountered with their gaisensha, or “sound trucks,” adorned with nationalist symbols like the rising sun flag. They desire a return to pre-war and wartime Japan and critique a contemporary society they see as formed on the premise of American post-war neutering. The groups have also co-opted the chrysanthemum, the seal of the emperor — the symbol adorns not only the car of the emperor but also the trucks of uyoku.

The idea that the imperial lineage of the Japanese monarchy is a unified and unbroken institution for thousands of years is a myth. The system in its shape today is an “invented tradition” of the late 19th century when Japan experienced a period of intense modernization and required a modern national identity to cement its new understanding through the slogan “civilization and enlightenment.” National identity became interconnected with the emperor, as society waged war in his name. For generations after Japan’s modern formation in the late 19th century, nationalism – especially in its extreme incarnations – was associated with devotion to the emperor. 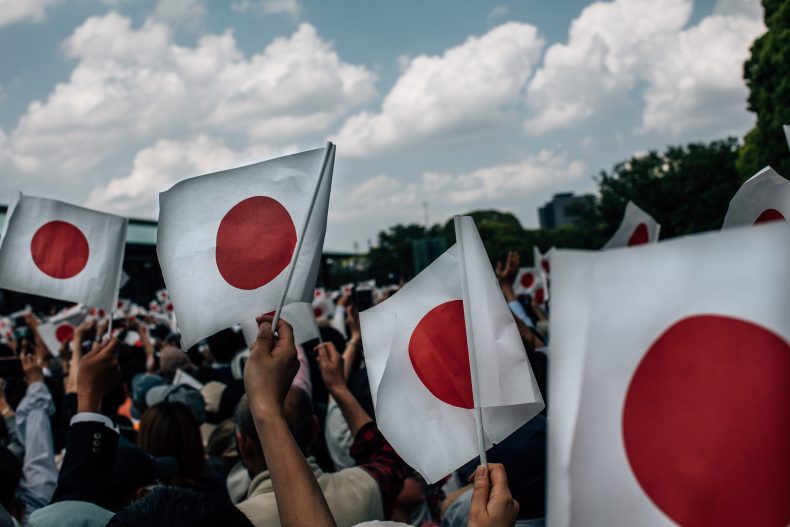 A crowd holding Japanese flags on the grounds of the Imperial Palace as Emperor Naruhito and other members of the imperial family make their first public appearance after the transition on May 4, 2019. Photo by Spencer Cohen.

The imperial system survived the American scalpel wielded by General Douglas MacArthur, supreme Allied commander of the American occupation, and taken to Japanese society following their defeat in World War II. The messy incision after the war attempted to remove elements of society that Allied forces deemed as the source of imperial expansion and war, including demilitarization of the Imperial Army and Navy and the end of the connection between state and Shinto. The emperor stood at the center of the Shinto religion as divine leader.

Rather than punishing the emperor for his wartime role, MacArthur favored converting the imperial apparatus into a means of ensuring post-war continuity and national unity in obedience to the American occupation forces. Occupation forces stripped the emperor of power, but the system continued to have immense symbolic import.

The symbol of the emperor continued to develop an unrelentingly positive image after 1989 under the reign of the Heisei Emperor, Akihito. Akihito, in statements and acts of remorse for the war, successfully transformed the institution from one of questionable war guilt to a source of peace and post-war stability. “When I was young, I didn’t think we needed an emperor,” noted an elderly man in his 70s in Tokyo. But “the Heisei emperor was promoting peace, which was different from the government and the right wing,” which altered the man’s attitude toward the imperial system.

Even so, as Naruhito takes the throne, a small strand of ambivalence, even criticism, pervades Japanese society. “It’s too much, it’s too much, I think,” expressed an office worker in his early 30s in response to the celebrations during the transition. The Mainichi, one of Japan’s leading newspapers, echoed the ambivalence in an editorial, wondering about the future relationship between the emperor and the people. The piece concludes by noting, “The image of the emperor as a symbol for the new era should be built based on the will of the public, through cooperation between the new emperor and the Japanese people.”

Naruhito seems to hear their call. On his first address as emperor, Naruhito stated: “I will act according to the Constitution and fulfill my responsibility as the symbol of the State and of the unity of the people of Japan, while always turning my thoughts to the people and standing with them.” 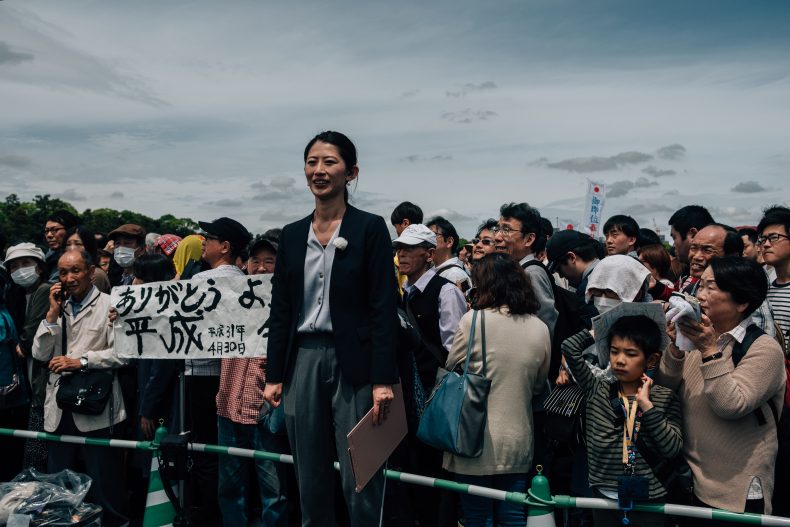 Flanked by a crowd, a reporter stands between takes at the Imperial Palace prior to the appearance of Emperor Naruhito following the regalia inheritance on May 1, 2019. Photo by Spencer Cohen.

Spencer Cohen is a graduate student at the University of Tokyo and a recent graduate of Columbia University in history. He is currently undertaking visual and written ethnographic work into an American base community outside of Tokyo.

Japan’s Farewell to the People’s Emperor

A look back at the Heisei era, and forward to the reign of Emperor Naruhito.

The paradox of a pacifist emperor amid rising nationalism politically is likely to continue in the Reiwa era.

As Japan celebrates a new Emperor and imperial era, the male-only succession rule underscores the monarchy’s struggle to survive.

The End of an Era: Japan’s Emperor Finalizes Abdication

As of midnight on April 30, Emperor Akihito has been replaced by Crown Prince Naruhito.