When analyzing Sino-U.S. relations it is common to hear the concept of the security dilemma used to explain relations between Washington and Beijing. Simply defined, the security dilemma results when one state is unable to determine the intentions of another, particularly one that is a potential adversary. This frequently leads to arms races in which states arm against each other in an action-reaction cycle. A significant challenge with the security dilemma is how difficult it is for one state to prove that various weapons systems produced by a rival state are not designed to be used against it. American weapons systems ranging from new Gerald R. Ford-class carriers to the F-35 can be deployed against a range of adversaries including North Korea, Iran, and various non-state actors. This versatility raises the question as to whether a full security dilemma exists between China and the United States. In extensive interviews with this author, American officials were quick to point out that the U.S. arms “against everyone” and not one specific country as the security dilemma would predict.

For the security dilemma to manifest itself there has to be evidence that both sides are consciously arming against each other. Interestingly, the United States has recently started to hint that certain weapons would be ideal for a confrontation with China. Three key weapons systems are a good measure of American plans for a potential China contingency: the increased and sustained production of Virginia-class nuclear powered attack submarines (SSNs), the resurrection of the Arleigh Burke-class guided missile destroyer (DDG), and the development of the Long Range Anti-Ship Missile (LRASM).

In the event of hostilities between the U.S. Navy and China, a crucial American tactical advantage would be in submarine warfare, with nuclear powered attack submarines (SSNs) as the key. Although the real or perceived challenge of the Chinese military has been on American strategic planners’ minds since at least the late 1990s, the American SSN arsenal was allowed to decline from a high of 98 in 1987, to just 51 at the end of the 2018 fiscal year. More importantly, even though China was labeled a “strategic competitor” by the George W. Bush administration and it was actively planning to devote significantly more resources to the Pacific before the events of 9/11, the Pentagon only requested one SSN to be procured per year until 2010.

SSNs are key strategic weapons for potential conflicts and the number of vessels procured per year is an important gauge of American defense planning. In Congressional testimony, Andrew Erickson of the U.S. Naval War College, widely viewed as one of the world’s foremost authorities on the Chinese navy, urged Congress to keep procurement levels of at least two vessels per year. Erickson stated: “it is essential to ensure the present two-a-year construction rate of Virginia-class nuclear-powered attack submarines (SSNs) — ideal for denying China the ability to hold and resupply any forcefully seized islands.”

While the navy has requested three SSNs for procurement in 2020, as the data below from the Congressional Research Service demonstrates, the numbers of SSNs will actually continue to decline over the next decade before increasing above today’s number in 2034. That’s because the aging Los Angles–class SSNs, which numbered 31 at the end of 2018, will start to be decommissioned in the next five to 10 years. 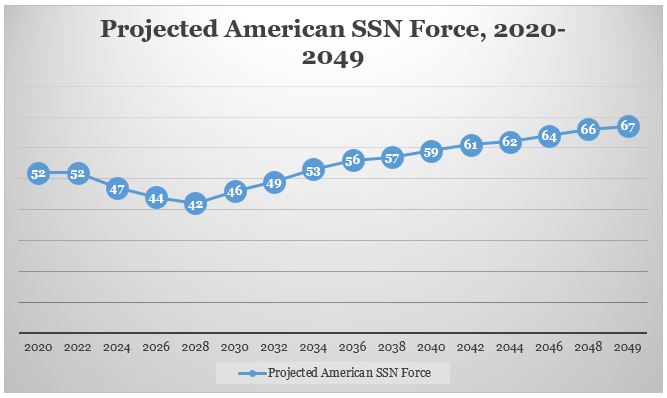 Data from the Congressional Research Service.

According to Lyle Goldstein of the Naval War College, the Chinese are well aware of the soon-to-be declining number of American SSNs.

The Revival of the Arleigh Burke-Class Guided Missile Destroyer

The Arleigh Burke-class guided missile destroyer program was initiated in 1985 and the last of these DDGs was supposed to have been ordered in 2005. Its proposed replacement was the-state-of- the-art Zumwalt-class DDG. However, the Navy ordered production of the Arleigh Burke-class to recommence in 2010 and can ceased construction of the more modern Zumwalt-class DDG. Between 2018-2022, 13 Arleigh Burke DDGs are to be procured.  While the Navy did not call China out directly as the cause of the this decision, it did cite “rapidly evolving threats,” and the need to have a DDG that can counter anti-ship cruise missiles and ballistic missiles as well as conduct anti-submarine operations. Importantly, the Navy argued that the Arleigh Burkes could carry out such missions and would be more cost effective than the Zumwalt DDGs.

In addition, a June 2019 Congressional Research Report argued that the 2008 decision to restart production of the Arleigh Burke DDG indicates a transition from an era where procurement was focused on operating in littoral waters against states such as Iran and North Korea to one focused on emerging threats. The report states that there is “a shift in the international security environment to a new situation featuring renewed great power competition.” It further states “the Navy is now focusing its planning on being able to operate in mid-ocean waters against capable naval forces from near-peer competitors such as China and Russia.”

A final weapons system that may be more China specific is the Long Range Anti-Ship Missile (LRASM). These advanced missiles, which are equipped with 1,000 pound warheads, can travel 580 miles. They became fully operational in December 2018 when they were fitted on the B1-B Lancer long-range strategic bomber. The F-18 Super Hornet is scheduled to be armed with LRASMs this year. Development of this missile is largely driven by the rapid modernization of the Chinese navy and has been described as a “game changer” in that it has the ability to target and destroy Chinese warships from hundreds of miles away. The LRASM is an enormous improvement from the Harpoon missile, which has a 488 pound warhead and a range of between 70-150 miles.

Overall, the American Navy is procuring warships, submarines, and missile systems that, while useful in a confrontation with states such as Iran or North Korea, seem to be increasingly designed with China in mind. The security dilemma predicts an action-reaction dynamic where each side arms against the other due to the uncertainty caused by not knowing the true intentions of a potential adversary. Recent developments in the American Navy increasingly appear to be a step in the direction of the security dilemma.

US Strategists on the Advantages and Limitations of Sea Power

Most of U.S. assets and allies in the Asia-Pacific are maritime-based. History suggests that won’t be enough to overcome China’s continental advantage.

Will Vietnam Lease Cam Ranh Bay to the United States?

Is there any meat to the rumors that Vietnam would lease Cam Ranh Bay to the United States?

Assessing the Outcomes of the U.S.-ASEAN Special Summit

The meeting fulfilled its purpose as a symbolic statement of American commitment, but came up short on the specifics.

Marcos might not have been the ideal choice of many U.S. policymakers, but he offers the opportunity for a more stable and predictable partnership.

The meeting could mark a turning-point in the bloc's approach to the ongoing conflict in its errant member-state.