Benedict J. Tria Kerkvliet on Speaking Out in Vietnam

The world of Suzie Wong became a war zone this past weekend.

Wanchai District in Hong Kong, the setting for the iconic 1960 film The World of Suzie Wong, became the center of Saturday night’s protests against the now infamous extradition bill proposed in June by the territory’s Legislative Council (LegCo).

Among this live 180,000 people in high-rise apartment blocks, who host a transient population of 600,000 at any given time. All of this is packed into an area of just under four square miles.

Saturday night’s protests were not so much about the extradition bill, as they were about the arrest on Friday of the 2014 Occupy movement leaders Joshua Wong and Agnes Chow, as well as a contingent of pro-democracy legislators who have been active in the demonstrations this summer.

The demonstrations had been banned by authorities. The lack of sanction had little effect, other than to add a greater sense of determination to protesters’ efforts.

Causeway Bay, on into Wanchai, Admiralty, and Central were all subsumed into what some call chaos, but what to others looks like a professional operation moving from district to district, and staying mostly ahead of police.

Walking from Causeway Bay toward Wanchai and Admiralty in the late afternoon, demonstrators could be seen walking in both directions on Hennessy Road, a major thoroughfare through the island’s primary business and business districts.

This was a tactical retreat, however, from the tear gas which had already been used in Central. At the same time, however, other protesters headed back toward Central, but stopped shy to set up a new base of operation in Wanchai.

A subset of the demonstrators is now professionally equipped to withstand tear gas measures used by police. They wear what appear to be police-grade, if not military-grade, gas masks.

As preparations for a stand-off in Wanchai proceeded, many well-clad demonstrators took moments out of their operations to warn unprotected bystanders to get off the street, and out of the front-line zones. 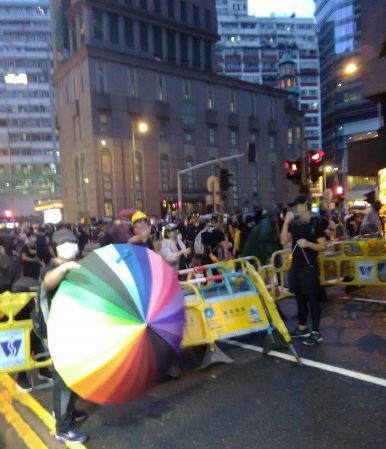 “THAT is the front line!” one earnest protester came over and said, pointing to a spot at the end of the block, where his colleagues were busy building a pile of metal, wood, and scrap into shape for what was clearly going to become a bonfire. “You have to go NOW!”

Protesters dismantled metal fence sections from sidewalks and street medians, dragging them into piles that created new barriers of their own making. These makeshift gauntlets were placed at strategic locations on the cross streets off of Lockhart Road, including Fenwick and Luard Streets.

In a creative move, determined demonstrators found two entire sets of stadium-type benches. Drawing cheers of approval from the crowd, 30 to 30 black-clad young protesters, men and women alike, ran the benches down the center of Hennessy Road, destined for a new destination as ballast for a barrier construction on Fenwick Street.

One older face-masked Hong Kong man addressed me on the sidelines of Hennessy Road.

Unsolicited, he volunteered, “Donald Trump is the only man who can solve this,” adding, “He’s not perfect, but he does good things, and this is something he can fix.”

Asked how the American president could weigh in on, much less fix, the situation in Hong Kong, he said, “Trump is the only one who can handle China.”

Did he think that mainland Chinese police were now embedded with Hong Kong police forces, I asked him? “Absolutely!” he replied.

“I have been doing this since the beginning, and I have seen police behavior change.”

Other protesters agreed with him.

One man in his 30s said, “Without doubt, mainland police are here. Hong Kong police would not act this way against Hong Kong people.”

Independent verification of these opinions from the street is hard to come by, however.

And there is always the possibility that protesters want to actively promote the idea that the mainland is actively interfering in Hong Kong affairs, under cover of a police role, whether true or not. 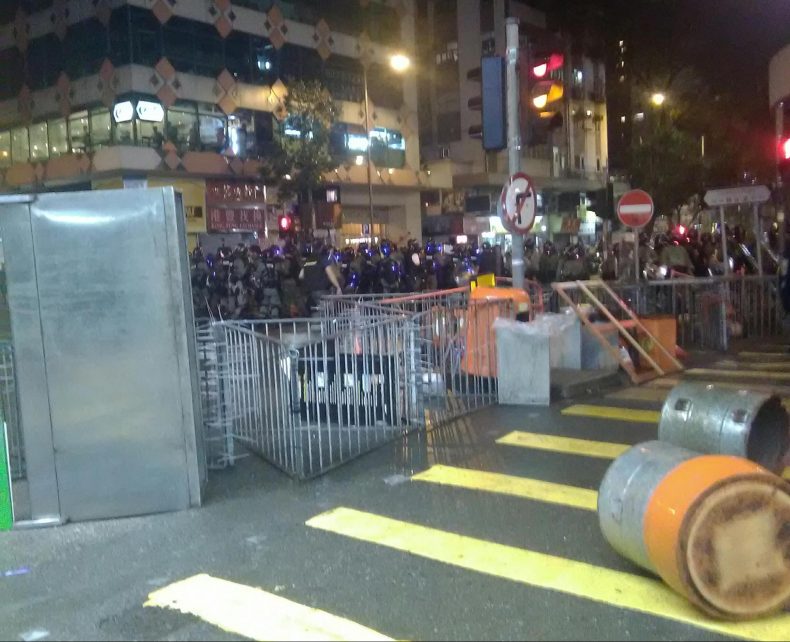 Before melting into the crowd, the older man continued, “I don’t understand why other Hong Kong people my age aren’t out here supporting the protesters. These are their children, their grandchildren.”

Protesters are now experienced in both taunting police, as well as forcing them to act.

Finally, riot police arrived and formed a phalanx on Luard Street, just south of Gloucester Road. They stood in formation for nearly 20 minutes before advancing.

Previously, similarly organized police had confronted protesters on Hennessy Road, but not before protesters successfully executed a fireball and several explosions from the debris accumulated on the front lines.

By 10:00 pm, the greater part of the protest had dissipated from Wanchai, with pockets still to be seen on Hennessy Road west of Luard. Protests and conflicts continued in other parts of the city, however, including on MTR subway lines.

As protests wound down in Wanchai, police were seen entering a building on Lockhart Road, just down from the Wharney Guangdong Hotel, and across the street from popular pubs and nightspots frequented by Western expats.

Questions remain on the relationship between that location and the Hong Kong police.

Without doubt, Hong Kong is going through a belated baptism of fire.

Twenty-two years into China’s experiment blending two utterly different political systems, experiences, and values into one country, it is clear that a significant part of the generation that was very young or not even born yet when Hong Kong was handed back to China is unhappy with the status quo.

Key to understanding their motivations is to realize that the perspective of these protesters is not rooted in a colonial experience to which they now longingly, and perhaps even romantically, hearken back. Unlike their parents and grandparents, the largest number of protesters in Hong Kong today were born under Chinese sovereignty, with Beijing, not London, as their central government as they grew up.

One of the more famous quotes from the movie, The World of Suzie Wong, is spoken by William Holden, the struggling artist who finds himself in love with a beautiful young prostitute who works in Wanchai.

“If I were a prizefighter, and I kept getting my brains knocked out, I’d be foolish if I didn’t quit.”

In fact, he doesn’t quit, and he ends up with the girl.

Hong Kong’s protesters, and the young urban guerrillas who are now their most prominent face, are likely to follow in his footsteps.

Bets are off on whether they will enjoy his happy ending, however.

The Problem With Travel in Southeast Asia and COVID-19

A Carnival on the City’s Margins: The Sonepur Mela of Bihar

Ankit Panda on Kim Jong Un and the Bomb

An interview with Panda about his new book, and the past and future of North Korea’s missile and nuclear programs.

The coronavirus crisis has brought to the fore -- and exacerbated -- a number of the Nepali state’s long-standing weaknesses.

From Tiananmen to Hong Kong: An Evolution of Protesting in China

The main differences boil down to experiences of freedom, realism, and technology.

Why the Mutually Assured Destruction Rhetoric in Hong Kong Is Dangerous

To pull Hong Kong back from the edge, all potentially influential parties must act – with strategic savvy.

Is it too little, too late?

The generation born under Chinese sovereignty in Hong Kong is pushing back on Beijing, too.

By Ronald U. Mendoza and Dion L. Romano

The Philippines' terrorism threat is real, and growing. Will the new act change that?

Detective work is at the heart of efforts to fight the pandemic. Will it be enough?

The Chinese approach to India represents continuity in behavior.

By James Kraska and Yusuke Saito

There is no universal definition for naval auxiliaries, but such ships are subject to the same treatment as warships during armed conflict.

The range of technologies China is—and was—interested in varies considerably.

Turkmenistan (Finally) Allowing the WHO In

But what will the WHO find? The WHO has been unwilling to criticize countries about their pandemic responses, but has been quick to praise them.

By Mariyam Suleman and Rahim Khetran

A longstanding form of corruption has sparked a mass social media campaign.