Snippets of Mandarin duets filled the hallway leading up to a large lecture hall at Eduardo Mondlane University (UEM), the premier university in the southeast African country of Mozambique. Students majoring in Chinese through the university’s Confucius Institute were celebrating the end of the academic year with an all-Chinese sing off. Though the competition was meant to be fun it was also a big deal; the winners would be gifted the latest Huawei phones and a chance to compete in front of the Chinese ambassador.

Much like the competition, the teaching of Chinese through Confucius Institutes is serious business, part of a decade-and-a-half long effort by China to build the kind of soft power that America and other Western countries have long enjoyed.

Confucius Institutes (CIs), like the one opened at UEM in 2011, are operated as partnerships between host universities and an arm of the Chinese government known as Hanban, which provides the bulk of the funding, the teachers, and the curriculum. CIs, which exist to teach Chinese language and culture, have long been viewed, according to one Chinese Communist Party (CCP) official, as “an important part of China’s overseas propaganda set-up.” There are currently 61 CIs active across Africa, a continent that China sees as key in its grand strategy to become a global power.

Like many sub-Saharan African countries, Mozambique abounds with concrete examples of China’s growing influence. Maputo, the capital, features a recently refurbished airport and Africa’s longest suspension bridge, both courtesy of Chinese companies. Investment in soft power is even more evident in educational outreach. UEM hosted the 2018 Joint Conference of Confucius Institutes in Africa, which featured a speech by CCP Politburo Standing Committee member and top legislator Li Zhanshu. UEM’s campus is being transformed by construction of a new building for the CI and, according to the most recent available data, China is a far more popular destination for Mozambican students than the United States or any European country other than Portugal – Mozambique’s former colonizer. 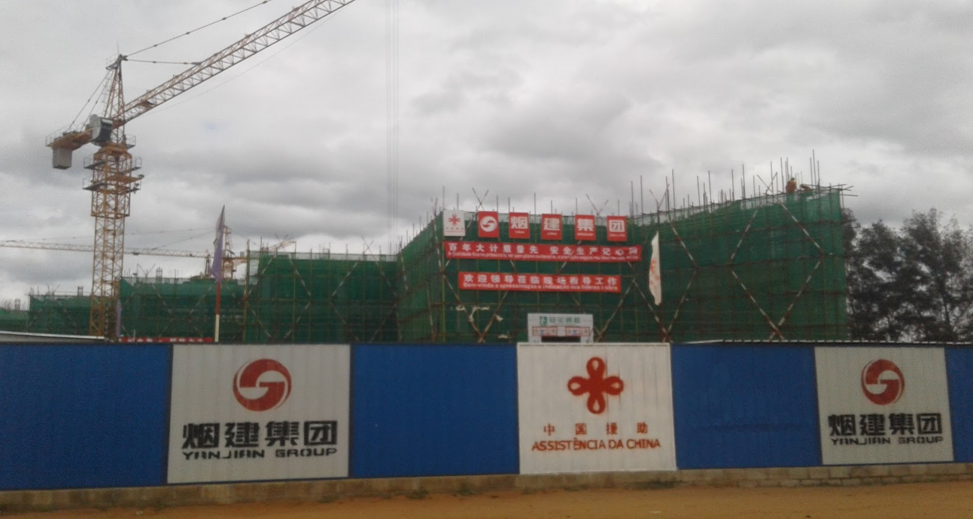 Construction on the new building of the Confucius Institute at Eduardo Mondlane University in Mozambique. Photo by Bryce Bray.

So, is China successfully developing what the South China Morning Post calls “an army of future influencers for its activities on the continent”? At least in Mozambique, despite progress, several challenges still impede the CI’s ability to project soft power.

The first and most obvious challenge is linguistic. The textbooks are all in English, and almost none of the professors speak Portuguese. According to Susan* (editor’s note: names marked with an asterisk have been changed for confidentiality), a volunteer professor at the CI who spent about a year in Mozambique, English is the only foreign language professors are expected to know. Susan is one of the few professors with any Portuguese ability, having studied the language in Macau – a former Portuguese colony in China. Yet when asked in private, many of her students admitted that even she doesn’t speak well enough to teach a class.

The second challenge is cultural. Though the cultural differences that come up on UEM’s campus tend to be more subtle than the worst incidents of Chinese cultural insensitivity and racism reported on across Africa, they still complicate the CI’s mission. According to Benilde Vieira, a Mozambican professor who has taught at UEM for decades, there have been disagreements over how to integrate the Chinese major with the university’s curriculum and where the new CI building should be located. Vieira said that these disagreements were exacerbated during meetings with derisive Chinese officials, some of whom reportedly yelled at Mozambican faculty.

Benny*, a Chinese major originally from a northern province of Mozambique, echoed many other students when he explained that Mozambicans often find Chinese people to be cold and insular. He did note, however, that the professors at the CI were generally cordial and respectful with their students.

The third main roadblock for the CI is a general lack of knowledge about the Chinese among Mozambicans. Nearly every student has a story of being laughed at or berated for studying Chinese. Feliz*, who recently returned from a scholarship in China, repeatedly defied his older brother’s commands to change his major. Darcilio*, a slightly older student who tried his hand at accounting first, said he was laughed at by a woman he gave a motorcycle ride to when she learned his major.

Even most Chinese majors admit they weren’t initially interested in the language. Many chose this course of study because it has the easiest entrance exam, offering a better chance of admission into UEM. The school is the main university in the country of 30 million people and there are on average around 20,000 applicants for the 4,500 undergraduate spaces open each year.

Combating the lack of awareness, however, has been the CI’s greatest success.

Chinese majors become the greatest advocates of the language’s utility, even if they didn’t think much about China before entering their course of study. This is because they see firsthand how valuable the language can be. According to Benny, the CI puts out job postings from Chinese companies, something no other major is able to offer a parallel version of. Darcilio pointed out that these are good jobs too, jobs with dignity, unlike what used to be offered by Chinese companies. Chinese majors also have a better chance of winning scholarships to study abroad than any other students at the university. Over the past three years the slots for the premier, two-semester, all-expenses-paid scholarship offered by the CI have increased from four to 12 to 22. 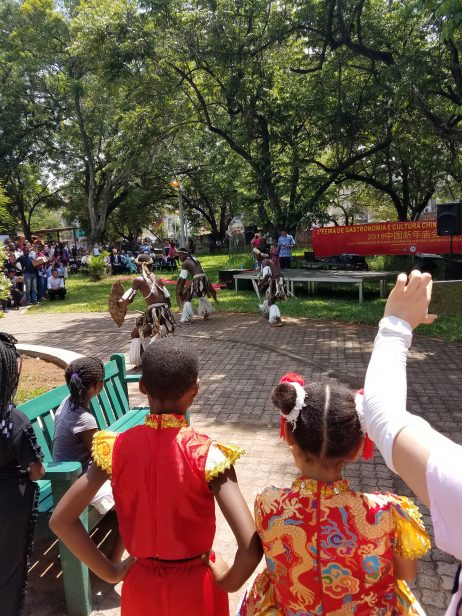 The dazzling effect of all this opportunity impresses not just the students, but their friends and family too. Feliz’s brother finally stopped ordering him to drop Chinese once Feliz won a scholarship to study in China and now that Darcilio works for a Chinese company he rarely gets questioned about the language’s utility.

But beyond the usefulness of the language, consensus breaks down among the students regarding China and its involvement in Mozambique. Several Chinese majors claimed to have a fondness for Chinese culture, though many struggled to name specific aspects of the culture they admire. Almost all are grateful for the opportunities they’ve been given and the investment they see in their country, but some are also deeply suspicious.

Feliz explained that he is worried because China, unlike the West, is not very transparent about why it gives aid and what it gets in return. “It looks like we are getting a lot and they are getting very little,” he said. “But in reality, I am certain they get so much more, but we can’t see what it is they are gaining. It’s as if they are robbing us and giving us just a little.” He has discussed this topic at length with like-minded peers in Mozambique and while in China he met many other Africans with the same fears.

Darcilio mentioned similar concerns, in slightly more diplomatic language. He pointed out the stories he’d heard of illegal Chinese fishing and said, “They are investing in us because they expect a profit. If we aren’t careful we could end up in a really disadvantaged situation.”

If the CI is aware of these fears, it is doing little to assuage them. Students repeatedly underscored the fact that there is basically no instruction on Chinese politics or policies, let alone how these might interact with Mozambique. This may preempt accusations – common in the West – that CIs are little more than propaganda outlets, but it leaves students woefully uneducated in basic facts about China. “They don’t have a president, he’s called something else,” Ercília*, who had won a short-term scholarship to China, offered when asked what she’d learned about Chinese politics in class. Darcilio explained that he once received a brief overview of the Chinese system of government, but this happened in one of his first classes before he understood much Chinese.

Yet even the more suspicious students bemoan what they see as ignorance about China and Chinese people on the part of the general Mozambican public. “They say things like ‘the Chinese eat snakes,’” Darcilio said, with an eye roll. Some with higher opinions of Chinese involvement think that the general lack of knowledge unfairly maligns China. Willy*, who believes that China’s influence is mostly positive, thinks the common idea that Chinese products are cheap and unreliable is false, and argues that people might only believe this because Mozambique is a poor country so people can’t afford nicer things yet. Benny explained that even though Chinese are culturally distinct he doesn’t think they are given enough of a chance by most Mozambicans.

But this clarifying impulse only goes so far. When asked if he would defend China in arguments with people who think poorly of the country Benny emphatically stated, “No, people have their own opinions and its not worth trying to change their minds.” For now it appears that a belief in the growing power of China, rather than a deep-seated affinity for the People’s Republic or its policies, is the main soft power dividend being reaped from Mozambique’s Confucius Institute.

Ari Rickman is a U.S. based research analyst focusing on Latin America and Sub-Saharan Africa. During the 2018-2019 academic year, Rickman studied in Mozambique on a Boren Scholarship, where he conducted the interviews used in this article.

China's struggles with multiculturalism and race issues will hinder its soft power overseas.

By Edward A. McCord

The Evolution of Afro-Chinese Identity

Interracial relationships between Africans and Chinese are changing how Chinese identity is defined for their children.

China is using Buddhist narratives to promote its soft power in Sri Lanka – and bolster its image as a harmonious regional power.

By Abdul Sattar and Munir Ahmed

The group, which called off the cease-fire recently, said the attack was to avenge the killing of their former spokesperson, Abdul Wali.

Why Banning Hybrid Radical Groups May be Counterproductive in South Asia

Rather than looking at them only through the narrow lens of terrorism, a more interdisciplinary approach that leads to nuanced policymaking is likely to be more useful.