The novel coronavirus strain that originated in the Chinese city of Wuhan has infected more than 28,000 people and killed more than 560 (there are also thousands to tens of thousands of suspected additional cases). Cases have been confirmed in more than a dozen countries, from neighboring Asian countries including Japan, Thailand, and Singapore to European countries, such as Germany and France, to the United States.

Countries worldwide have implemented strict measures to reduce the risk of exposure. Authorities in China instituted widespread lockdowns for all of Hubei province and several other large metropolitan areas such as Wenzhou and Wuhan, including body temperature checkpoints. Others, including the United States, have evacuated and quarantined their residents from China, issued travel advisories and restrictions, and suspended flights. Still other countries, such as Mongolia, have closed their border with China. Separately, business leaders and international institutions have expressed concern about the virus’ impact on the global economy.

Some narratives regarding the outbreak may stoke fear and anxiety; misinformation is rampant. Others have highlighted shortcomings in the Chinese bureaucracy that could have contributed to the severity of the epidemic. Still, there have been significant efforts at various levels — from individuals, businesses, foreign countries, and collective civil society groups — to stop the spread and alleviate supply shortages.

After declaring the novel coronavirus a public health emergency, the World Health Organization announced on February 5 a $675 million preparedness and response plan through April 2020 to further curb the virus’ spread and to protect countries with weak health systems. 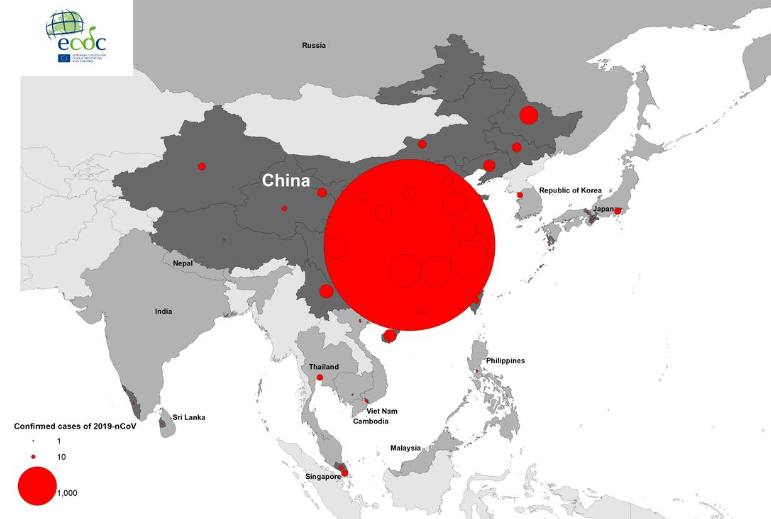 A map of the virus’ spread as of Feb. 6, 2020. Graphic by the European Centre for Disease Prevention and Control.

Dozens of pharmaceutical companies and research institutions have launched efforts to develop a coronavirus vaccine. Members of the pharma and biotech industry, including Johnson & Johnson, GlaxoSmithKline, Gilead, Inovio, and Novavax, in cooperation with the Norway-based Coalition for Epidemic Preparedness Innovations (CEPI), have joined forces to work globally to address the epidemic. While a vaccine will do little for those already infected, it could curb future cases. Researchers are aiming to develop trials for human testing by April.

The United States also sent medical experts from the Center for Disease Control to China to work with health authorities. The European Union mobilized 10 million euros ($11 million) for coronavirus research.

Amid the demand in China for medical care, there have been looming shortages of equipment and supplies. To alleviate emergency supply concerns, the United Nations International Children’s Emergency Fund, Belarus, Brunei, Cambodia, Egypt, Iran, Japan, Pakistan, and others donated materials ranging from medicine to face masks, protective suits, gloves, and disinfectants.

As the outbreak spread, China deployed military doctors as well as officers to oversee the delivery of medical supplies and the temporary hospital that was built in just over a week’s time. Military logistics teams will also be responsible for ensuring that donations made via charities reach intended recipients.

Chinese firms and business leaders have also been swift to appeal for external help, alongside making their own contributions. Major tech companies, including Alibaba, Baidu, Tencent, and 360 Security Group, earmarked hundreds of millions of RMB intended for scientific research on the virus, better virus control coordination on their platforms, and donations of supplies. Other Chinese businesses issued bonds worth the equivalent of $300 million to raise funds for control and prevention efforts. Separately, locals banded together to help fellow communities struggling to manage the outbreak. For example, reports showed volunteer taxi drivers helping to transport medical workers after bus lines were suspended. Netizens also took to social media platforms to help one another amid early reluctance by Chinese authorities to widely address the outbreak.

China has had previous experience addressing public health outbreaks, including the H1N1 swine flu in 2009-2010 and SARS in 2003. Despite this experience, public health issues, as well as natural and environmental disasters, pose a significant test to the Chinese Communist Party apparatus. How flexible, responsive, and nimble will the bureaucracy be when faced with such unexpected challenges? Beijing’s initial instinct to suppress early reports and punish those seeking to reveal information that conflicts with the official line will likely continue to exacerbate such incidents. As the world rightly responds to Chinese appeals for help, one still cannot help but wonder how severe the crisis would have been if the official response had been more transparent and swift.

Everyday Life in China Under the Shadow of Coronavirus

“Living on top of a mountain” with food deliveries, no masks – and a surprisingly upbeat outlook.

China’s ‘Whole-of-Government’ Pushback on the Coronavirus

Outlining the steps taken so far by Beijing to combat the epidemic.

Authorities have once again changed how they count new daily infections.

The Coronavirus and China’s Diplomatic Slowdown

With Beijing turning inward to battle the new disease, progress on the foreign policy front may be delayed.