The streets of Beijing, one of the world’s most populous cities, are strangely quiet. Areas where sidewalk space was once a premium are now sparsely populated. To further encourage voluntary house arrest, condo complexes have barricaded all but one main entrance; coming into the complex warrants a temperature check. A system of makeshift “movement passes” has been implemented, where residents have to show a laminated card to enter their own communities.

The stilled streets are a stark contrast to the continual flow of information on WeChat, China’s most popular communication app. Daily bombardments of articles, images, and videos come from well-meaning family, friends, and colleagues. Much of it is news about the most recent developments for COVID-19, as the new strain of coronavirus that emerged in December is officially known. Some of the posts are instructional — how to properly wash hands, or how to work out at home using household items (laundry detergent has a new purpose). Some content is humorous. One video shows a man who has jerry-rigged household appliances to suspend Coke cans in mid-air and move them in a semi-circle. The man sits at his dining room table, periodically clicking his own drink with the cans, making toasts to imaginary friends.

Despite the variety and vastness of content about the virus, there is still one man who stands out among the chatter: Dr. Zhong Nanshan.

Zhong, an epidemiologist and pulmonologist, is sometimes referred to as the nation’s “SARS hero” by Chinese media. In 2003, while SARS left China’s health authorities and government officials struggling to rebuild public trust, Zhong was hailed for his integrity. This was largely due to his public admission that the virus was not as under control as state media portrayed. In a post-SARS interview, when he was being lauded for his honesty, Zhong said, “I couldn’t help myself. I said it’s not all under control.” It was a marked break when the party line had been to downplay the epidemic.

Despite his advanced age (born in 1936, he was 13 years old when the People’s Republic was founded), Zhong has been appointed to lead the National Health Commission’s investigation into the novel coronavirus. By extension, he has become the de facto spokesperson for any information related to the illness. Beyond his work tracking and studying COVID-19, he has given multiple interviews to Chinese and English language media. He is an obvious choice for the position, as the Communist Party tries to highlight its efforts to manage the crisis in a transparent, decisive manner. Anointing Zhong as the public relations rep is also a strategy to shift focus and insulate the central government from blame, should that be necessary. 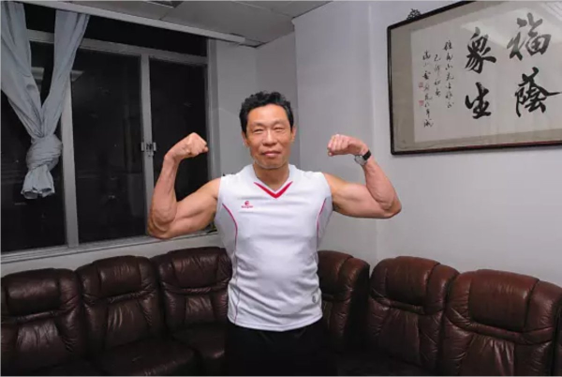 Dr. Zhong flexes for the camera in a photo posted to social media.

After SARS made Zhong a household name he remained a public figure, continuing to speak out about health issues from food safety to air pollution. In an interview with Chinese media, he posed the question, “What’s the point of being the world’s number one in GDP if eating, drinking and breathing are all in doubt?” With his record of incisive commentary, Zhong established credibility as someone who puts public health first. He was also lauded for his own health regimen. Despite qualifying for a senior citizen discount, he has been photographed in muscle tees flexing his biceps, swimming laps, and shooting hoops.

His image and messages now flood the digital sphere, used to bolster people’s confidence that the government is doing things right this time. China Daily has designed a poster featuring a sleeping Zhong, which they suggest readers share. The image is framed by the phrase “The return of the 84-year old fighter” in bold, red letters; below, the text says “[he is] back to the front lines” and “salute this senior academic.”

Unfortunately, COVID-19 bears an unsettling resemblance to the public health crisis of 17 years ago. In both cases, a viral respiratory disease stemmed from unregulated contact between animals and humans, a wet market that sanitation and health officials ignored. And again, there has been government interference in ensuring the public was informed of the health threat in a timely manner.

Although Xi Jinping has prioritized strengthening the rule of law, the recurrence of a zoonotic virus reveals gaps in sanitation regulations. The outbreak also demonstrates the danger of excessive information control and the risks associated with top-down governance when it comes to informing the public of a looming crisis. In an interview on CCTV (which will likely be his swan song) Wuhan Mayor Zhou Xianwang pointed out that “As a local government official, I… have to wait for authorization before I can release [information].”Another high profile case highlighting the dangers of censorship is that of Dr. Li Wenliang, a Wuhan doctor who was one of the first people to raise an alarm about the virus. After one of Li’s posts went viral, he was reprimanded by police and required to sign a “self-criticism” letter for the charge of disturbing public order. Li himself later passed away after contracting COVID-19, sparking public outcry and government promises of an investigation.

The Chinese social media sphere is afire with discussion of the virus — from legitimate public health advisories reminding people to wash their hands, to false rumors that a vaccine has already been discovered. There’s also teeming criticism of the government, which censors have permitted up to a point, ostensibly to allow citizens to vent. 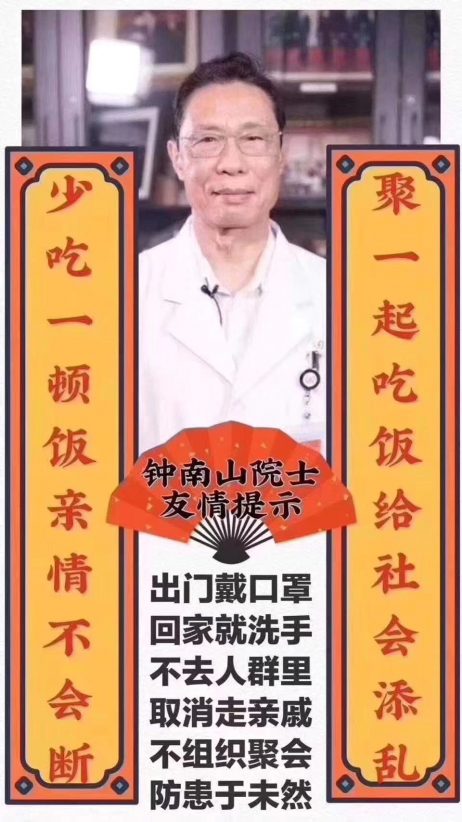 A poster circulating on social media leverages Dr. Zhong’s image to give “friendly reminders” about stopping the spread of the coronavirus.

Zhong acts as a counterweight, providing messages that are mostly encouraging. In the Chinese media, he is portrayed as a grandfatherly figure fighting for the people. Multiple media have published an image of him sleeping on a train as he returns from a visit to Wuhan, describing him as a people’s hero fighting to beat the virus. In turn, Zhong recently proclaimed in an interview that Wuhan is a heroic city, even getting teary eyed.

Zhong has made statements assuring the public that Chinese officials have been transparent in handling the new coronavirus. Coming from the person who broke with the government line over SARS, the message is all the more potent. He has also deflected one of the most pernicious criticisms of the government’s handling of the crises, defending Wuhan officials over the timing of their information release, saying they could only do so once test results had been verified by higher authorities.

In contrast to other doctors, who are suggesting that the coronavirus will peak in May or June, Zhong initially put forth the optimistic prediction that it would peak between February 4-7. This was later amended to February 12-16. He has now suggested that the virus will peak at the end of February and plateau in April. He has also said that after the climax, there will be no more large scale increases in transmissions. Zhong has also assured us that this virus will not last as long as SARS, and that due to early detection and early prevention, he is confident that a full-blown epidemic will be avoided.

At this point, it’s too early to tell if these forecasts will prove true, or too good to be true. But at the very least, Zhong’s reassuring words are helping to head off panic. In the meantime, people fall back on human’s most fundamental abilities in enduring crises — patience and hope.

Marjorie Perry is a freelance journalist whose articles have been published in The New York Times, The Economist, South China Morning Post, and SupChina, among others.

Cracks in the System: COVID-19 in Chinese Prisons

The spread of the disease in prisons reveals flaws in China’s epidemic countermeasures.

Despite some concerns and criticisms abroad, most Chinese (and expats) are eager to roll up their sleeves for the jab.

Venues and musicians in Wuhan, China’s underground rock capital, are struggling with lockdowns after the outbreak of COVID-19.