Though North Korea has not conducted a nuclear test since 2017, the regime continues to test short-range ballistic missiles and rockets systems, with two new weapons tests in March alone. Diplomatic efforts between North Korea and the United States, defunct for months, have failed to deescalate tensions.

Both nuclear programs threaten U.S. interests and regional stability, even though there are clear differences between the programs. Both Pyongyang and Tehran emphasize their right to possess nuclear weapons, while North Korea’s more developed program, one that has already produced nuclear warheads, presents the clearer challenge in the short term. Meanwhile, Iran’s nuclear program remains a civilian one and it’s estimated that conversion for military purposes would take approximately a year, further suggesting that North Korea should weigh more heavily as an explicit, rather than potential, threat. Yet it is unclear if the American public views these programs similarly. With longstanding bellicose rhetoric from Pyongyang and multiple nuclear tests, the public may have been conditioned to not expect further escalation. In contrast, Iran’s program lacks the track record to properly evaluate the associated rhetoric.

Version 1: Iran’s nuclear weapons program is a critical threat to the vital interests of the United States.

Version 2: North Korea’s nuclear weapons program is a critical threat to the vital interests of the United States.

Across all 1,198 respondents, we find similar concerns toward the two programs, with North Korea edging out Iran by 2.7 percent. However, separating by partisan identification, we see noticeable differences in perceptions. While clear majorities of Democrats and Republicans viewed both as critical threats, Democrats viewed North Korea as the greater threat by a margin of 12.4 percentage points, while Republicans viewed Iran as the greater threat by 11.3 points. Our findings in March are remarkably similar to a previous survey in September with the same question. 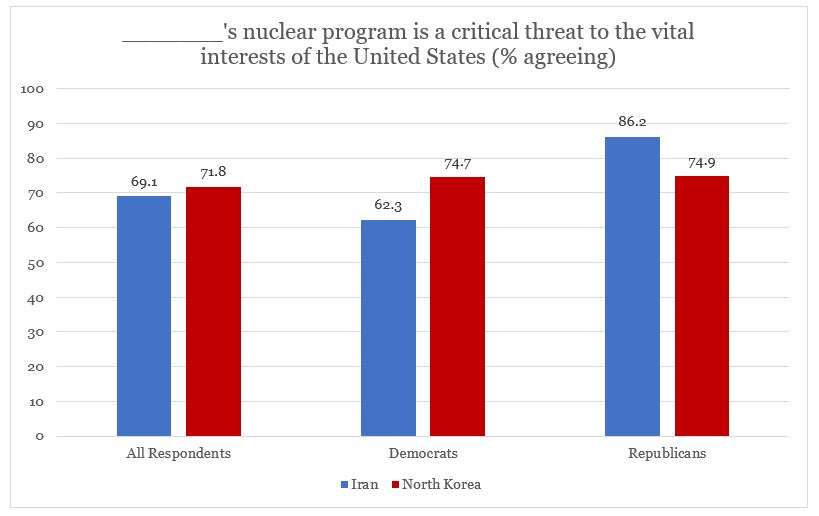 Additional statistical analysis finds that both Democrats and Republicans view the North Korean program as a greater threat than those without a partisan identification, a pattern that endures after controlling for age, education, and income. However, Republicans were more likely than Democrats and those without an affiliation to view Iran as critical threat.

A separate question on the March survey gives additional insight.

Of the respondents, 1,168 provided a valid response to the following open-ended question, asked earlier in the survey: “In your opinion, what one foreign country is the greatest threat to U.S. national security?”

Over 90 percent of respondents mentioned one of four countries: Iran, North Korea, China, and Russia. Here we see that Democrats were marginally more likely to mention North Korea over Iran, while Republicans were twice as likely to mention Iran. Meanwhile, Russia was mentioned by a majority of Democrats, at more than twice the rate of Republicans, while Republicans identified China at more than twice the rate of Democrats. 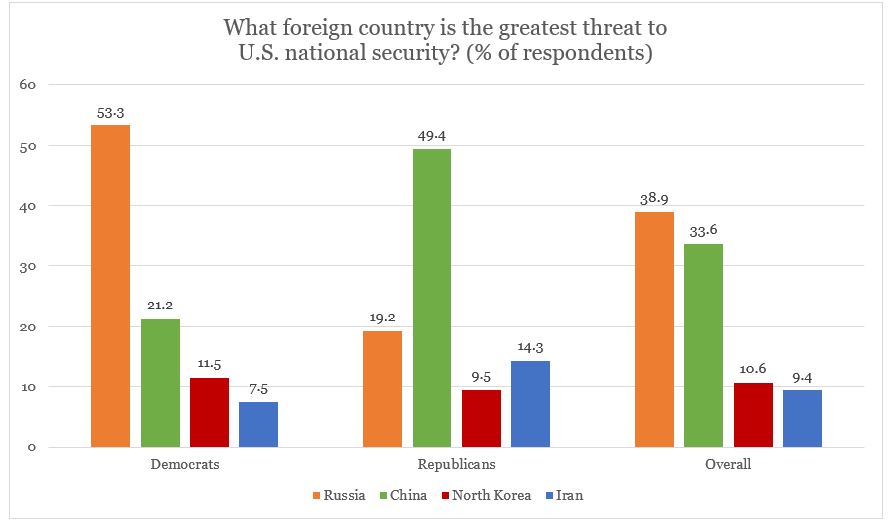 It is not surprising that a majority of respondents chose Russia and China as their answers, and the partisan differences are easily explained as well. A sizable percentage of Democrats may have chosen Russia as the most threatening to U.S. security because of concerns over Russian interference in the 2020 presidential elections, something Republican leaders have downplayed or dismissed. Meanwhile, the high rate of Republicans who selected China is consistent with a March 2020 survey that found 31 percent of Republicans view China as America’s greatest enemy. The Trump administration has been vocal about allegations of Chinese espionage and IP theft, as well as China’s growing military capabilities.

Interestingly, there is a sharp partisan divide in terms of respondents selecting Iran and North Korea. Potentially, the Trump administration’s framing of Iran as a threat through drone strikes and pulling out of the Iran deal shapes Republican views on Iran more broadly. While the Trump administration categorizes North Korea as a threat, the United States has not engaged in drone strikes or actions that could exacerbate tensions. Moreover, Trump’s willingness to meet with Kim Jong Un potentially lessens the perceived threat, despite the greater nuclear capabilities of the regime. Conversely, Democrats might see the failure of the Trump administration to successfully negotiate with Pyongyang as a reason why North Korea is a threat, while focusing attention on the original Iranian nuclear deal as a workable solution.

Overall, our findings suggest that while the nuclear programs of both Iran and North Korea are viewed as serious threats, partisan deviations complicate a broader consensus on which deserves greater attention.

Love it or hate it, most Americans knew what the Trump administration was doing on North Korea – and what they thought of it.

After the position lay vacant for six years, the U.S. finally has a nominee to tackle North Korean human rights issues.

America’s Pacific Island Summit: The Good, the Bad, and the Ugly

The landmark meeting encapsulated both the strengths and weaknesses of U.S. strategy in the region.

US National Security Strategy 2022: The View From Bangladesh

The increasingly stark language of competition with China will alarm countries like Bangladesh, who want to remain friendly with both sides.