Narmak is a self-taught animator and the creator of “Suponjibobu,” a viral SpongeBob anime series garnering millions of views on YouTube. Narmak adopted the Japanese term “Suponji Bobu” (スポンジ・ボブ) for his anime interpretation of the beloved American animated series, “SpongeBob SquarePants.” The Diplomat spoke with Narmak about what inspires him, the overlap between SpongeBob and Japanese shonen anime, and multicultural influences from both West and East.

Kamran is a 23-year-old Pakistani-American widely known by his burgeoning fanbase and over 1.6 million YouTube subscribers as “Narmak,” his online pseudonym. Narmak first started animating in high school for various projects. While completing his BA in Economics in southern California, Narmak picked up on an ongoing YouTube trend of mock opening credit scenes for “Evangelion,” a well-known Japanese anime. Narmak is especially tied to opening credits of anime due to action sequences, the quality of animation, and the musical tracks. But many mock “Evangelion” openings featured various characters with very simple edits. “I asked myself, ‘There’s so much potential here… what if you took a non-anime show and made an anime opener for that show?’ So I decided that would be my next video project.”

Narmak’s work organically sprouted from his combined love of Japanese manga and Western cartoons, from Adult Swim to shonen (少年) anime, a type of Japanese manga defined by its primarily male, teenage audience. Despite being known for epic fight scenes, “shonen anime is so much more than short moments of expressively fluid and detail-oriented sequences, known as sakuga (作画),” Narmak says. His first milestone video, “Attack on Ogre,” fused the Shrek franchise, the anime “Attack on Titan,” and Pokémon characters, embodying this love for shonen anime. That video solidified his place in the online anime universe.

Narmak’s accumulated knowledge — from watching anime for enjoyment, to mentally “rewinding and rewatching certain scenes to study the technique” — has led to Narmak’s self-proclaimed disclaimer: “I can’t really explain why or how I do a lot of things.” 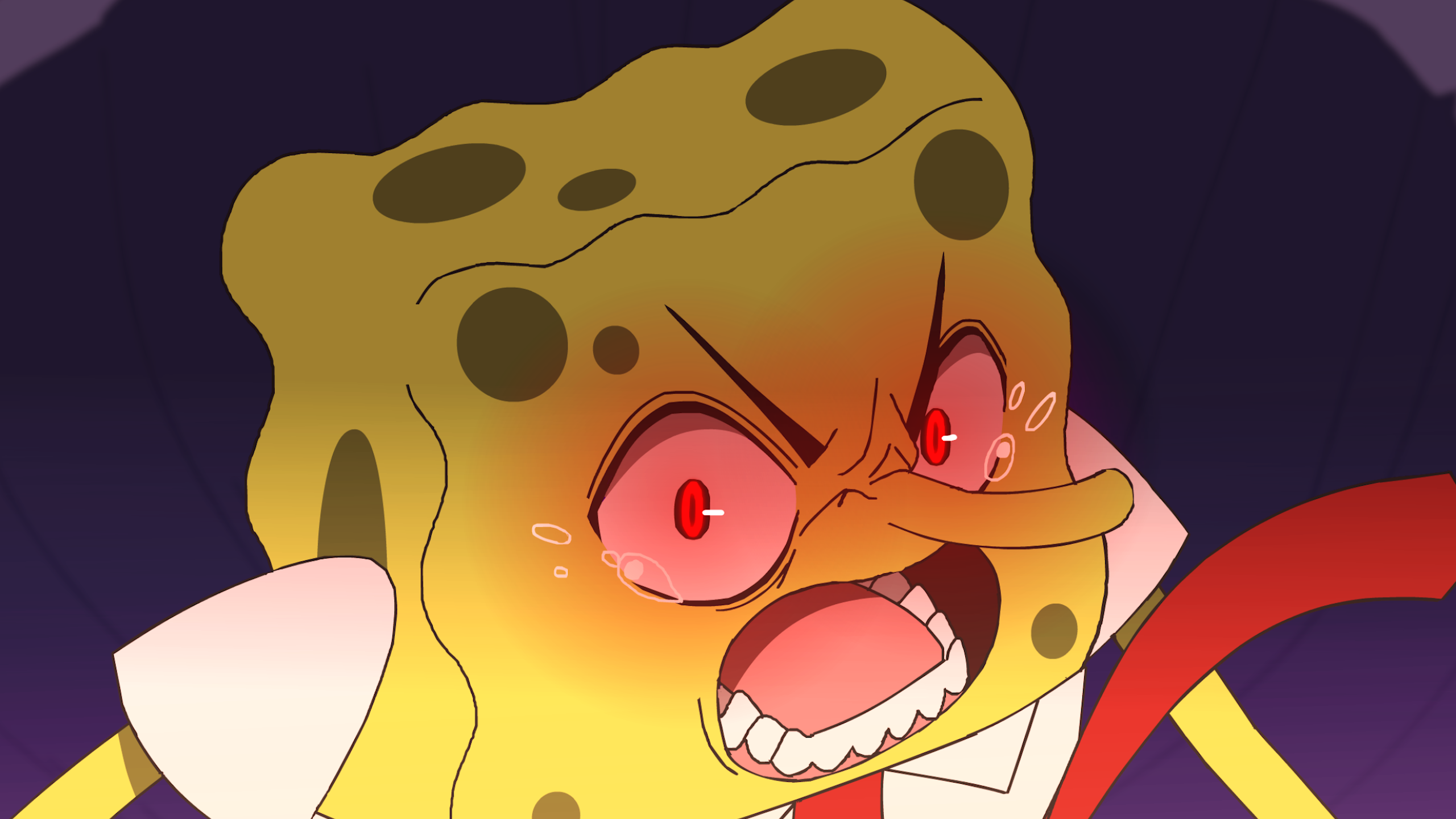 Narmak’s focus on SpongeBob, however, was no accident. As Narmak discovered, “If I tweak it, SpongeBob itself is like shonen anime,” with several elements aligning perfectly with classic shonen tropes. First, SpongeBob himself — the protagonist of the show — is like other classic anime heroes: he is cheerful, visually bright (yellow), and yearns to be the world’s best… fry cook. The protagonist’s main rival — Squidward, in this case — wears muted tones (blues) and is edgy, serious, and somewhat friendly with the protagonist.

Narmak, however, didn’t want to “get hung up on the tropes” or copy archetypes for every character. Cue Narmak’s interpretation of Patrick Star — SpongeBob’s silly best friend — into the archetypal teacher or sensei. Narmak explains, “Most people recognize that Patrick in the show is not a complete idiot. Sometimes he would drop wisdom. Whenever SpongeBob encounters a difficult issue, Patrick would give advice on what to do. When SpongeBob first met Sandy, Patrick led SpongeBob through those situations. I just converted it into a more shonen, anime form.”

When it comes to Sandy Cheeks, SpongeBob and Patrick’s squirrel friend, Narmak admits that female characters in shonen anime are usually not very well-written. “They need saving, or function as side characters. In episode one, Sandy doesn’t do much. She cries. This whole episode was a parody of shonen anime, so she didn’t really have a purpose. But in future episodes, we will see Sandy as the karate expert we know her to be.”

Shonen villains, however, are slightly more staggered. At the beginning of an anime, the first villain is a “throwaway that doesn’t prevail throughout the series. It helps introduce the world and the main characters’ powers.” As the anime develops, more serious, long-term villains will take root. In the case of Suponjibobu’s first episode, SpongeBob battles Bubble Bass in a one-off episode as a “stepping stone villain,” says Narmak. “I didn’t want to include any notable SpongeBob antagonist. I wanted to ease people into it and get the ball rolling.” Other villains Narmak may pluck from the SpongeBob universe are all featured in the opening credits of episode one, including Dennis from “The SpongeBob Movie,” Doodle Bob, and — of course — Plankton.

“I like taking characters people love and putting them into a new light,” says Narmak. “I take references from the show and bits of characters’ personalities, various archetypes from anime, and put my twist on it. It’s a character you recognize, but they’re completely different. They’re their own characters.” There are several SpongeBob episodes that Narmak has identified as shonen arcs, so “a lot of the work is done for me. The basis is there; I just have to convert it.” These story lines will no doubt appear in Suponjibobu anime episodes to come. 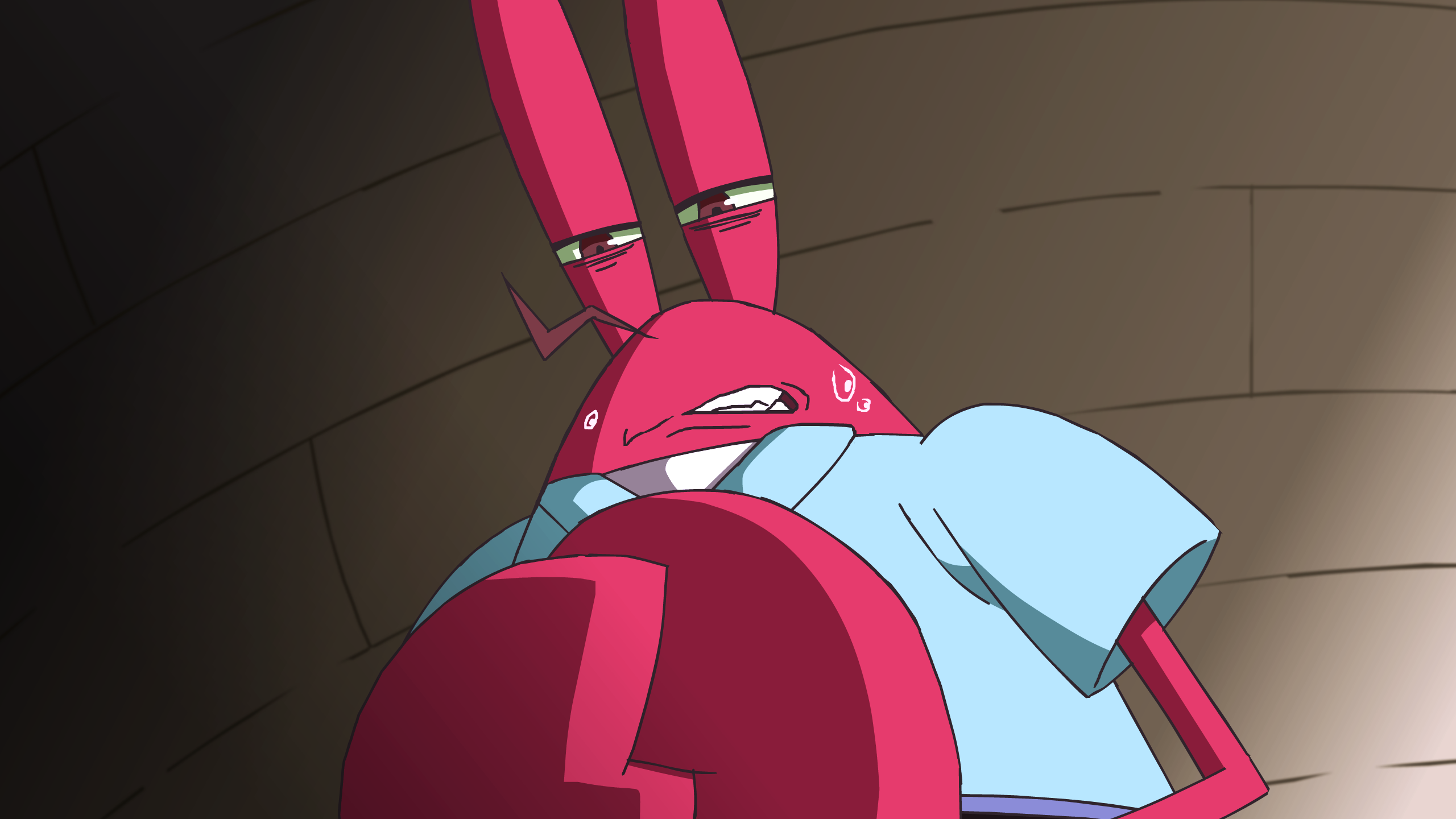 Narmak says the real reason he loves anime is not for the writing, but for the animation itself. That’s why every visual aspect of Narmak’s anime is created by him from scratch, from storyboarding, drawing, the movement, the visual editing and the video editing, the coloring, the shading, and the backgrounds. It comes as no surprise that while the idea for Suponjibobu crystallized over a year and a half period, the animation process alone took over six months. Narmak is eager to ensure his work reflects broader trends in animation, ranging from film techniques, realistic proportions and movement, and using the entirety of the 3D space with varying camera angles. As Narmak asserts, “Anime tries to recreate real life filmmaking in animated form.”

Beyond the animation itself, Narmak says the “authentic feel” of anime is one of the most important aspects. “Anime is the feeling, the tone, the music, and how it goes together.” “Naruto” (ナルト) is one of Narmak’s favorite anime for this very reason: “Naruto’s storyline and animation are both amazing. Norio Matsumoto, the lead animator for some particularly memorable Naruto episodes, greatly inspires me. But that’s on the animation side; the tone, the skill. Part 1 of Naruto is also a big inspiration because I grew up with it. I love the characters and love the story. I’ll go back and watch fight scenes.”

Suponjibobu maintains this authentic feel of anime through not only its storyline, but through well-timed nods to shonen anime. For example, when Bubble Bass prepares his attack in Suponjibobu episode one, he yells his technique like a typical shonen fighter, including Japanese titles for emphasis.

Narmak’s holistic approach to animation is also heavily underscored by original music and voice acting. Narmak worked with audio designers Sander the Composer and Seycara to produce original music for Suponjibobu episode one. SFX designer Strelok handled the sound design. Sander the Composer has worked with Narmak on other openings, and specializes in taking SpongeBob music and making it more orchestral to sound more typically anime.

With the donated time and help of John Wang and his crew of voice actors, Suponjibobu episode one was dubbed completely in Japanese to exude the tone of more serious anime. The English dub of episode one, to appear shortly on YouTube, will feature English voice actors that mimic the voices of the original SpongeBob characters, “but saying and doing things that they wouldn’t originally do.”

Narmak has decided to focus on animation full-time, but he is set on creating anime that he enjoys. “I make videos today to practice animation and make something new with a storyline I will enjoy. I think that’s part of the reason I’ve been successful; I make what I want and not just what the audience demands.”

Narmak is already preparing to continue animating the Suponjibobu series. Fans can expect multiple future episodes, but when they will appear has yet to be scheduled. Narmak himself claims he doesn’t know how many more episodes he will make, but he does know the main plot points, broader arcs, how the characters will develop, and the ending. “This takes time,” Narmak says. “I’m not going to overwork myself, and I am not just going to churn them out. I want to produce quality, not quantity.”

In the meantime, Narmak will continue to make shorter and punchier visuals to keep fans happy. It was the fans, after all, who trended #SaveSpongebobAnime and pressured YouTube to repost episode one after it was erroneously removed for violating a YouTube policy. Interactions with fans remain one of Narmak’s favorite parts of his work being public, including fan art, fan covers, SpongeBob anime endings, and mix and matching SpongeBob anime openings, particularly those who tag and credit his original work. While he may have been one of the first to take non-anime and place it in the anime universe, Narmak says, “The reason I first made non-anime openings was because no one was making them. I really like that more are coming out. It’s exciting to inspire others.”

25 years after its release, Kondo’s solitary contribution to the revered Studio Ghibli canon remains much beloved.

Mongolia hosted a conference dedicated to the role of women in peacekeeping operations.

Japan has made childcare leave a top priority but the latest amendments show inconsistencies between the law and reality.