Dina Nurdybai, an ethnic Kazakh woman from China, went from a successful business owner to an immigrant in Kazakhstan with thousands in debt to a Chinese bank.

For many years now, the Chinese authorities have been waging an intense “war on terrorism,” de facto targeting the country’s mostly Muslim ethnic minorities in the Xinjiang Uyghur Autonomous Region. China’s method of fighting terrorism involves sending hundreds of thousands, if not millions, to “training centers” that, according to multiple eyewitness accounts, were managed like prisons and were aimed at erasing the “students’” ethnic identities. More recently, scholarly and journalistic reports have suggested that “genocide” might be a more applicable term for the government’s actions, with a report by China scholar Adrian Zenz revealing evidence of the government taking steps to slash birth rates by forcing largely Turkic women – Uyghurs, Kazakhs, Kyrgyz, and others – to undergo nonconsensual sterilizations, abortions, and pregnancy checks.

The case of Dina Nurdybai brings to light another potential abuse during the time spent in “training” – a debt trap.

In 2015, Nurdybai opened a company to produce traditional Kazakh clothing, relying on her previous experience gained from working for the Tasbulaq clothing company. By October 2017, she was the proud owner of Kunikai, another clothing company, which employed around 30 people. In addition to this, she also ran the Aidai tailor shop in Nilqa county.

At first, she says that she felt a certain support from the county authorities. They once did a news segment about her company on local TV, which helped the business grow. At the same time, there were still certain limitations placed on the company because of her being ethnically Kazakh. Her company was required to hire a Han Chinese accountant, and produce traditional clothing for all 56 ethnic groups in China, not just the Kazakhs. It was only after committing to these two requirements that she was allowed to get her business properly registered. 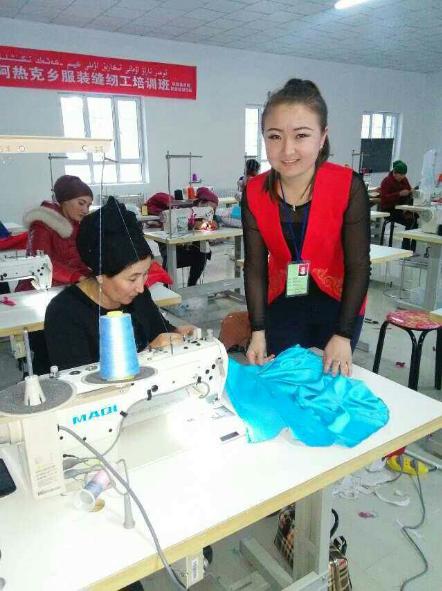 In 2016, a year after she opened the business, the local county authorities advised Nurdybai to take out a loan. The reasoning seemed sensible: Taking out and paying off a loan would raise her credit score and make her a more trustworthy business partner in the future. Although her business was thriving regardless and did not actually require the additional monetary investment, she went ahead and followed the officials’ advice, taking out a loan of 70,000 Chinese renminbi (roughly $10,000).

While Nurdybai’s initial plan was to take out a simple individual loan, bank employees advised her to switch to a “start-up” variant for entrepreneurs, as this had no interest rate and a two-year pay-off timeframe. That loan plan would also automatically enroll her in a lottery for a place in entrepreneurship classes in inner China.

“The bank staff said that the ‘start-up’ loan could potentially grant me a place in a 6-month business training course in Tianjin, starting in November 2017. Out of all the borrowers in our region, they would send one Kazakh and one Uyghur to the program. After having finalized the ‘start-up’ loan, I received an SMS admitting me to the program. But I didn’t go,” Nurdybai says.

A year into the loan, with her company thriving, Nurdybai had enough money to pay it off in a single transaction. However, an accountant in her company advised her to wait until the actual two-year deadline, telling her that he had consulted other professionals in a big accounting firm, as well as a lawyer friend, and that all of them had thought that waiting was the best option. Nurdybai took the advice, despite not really knowing the reasoning behind it, as she believed that she would still be able to pay the loan off in a year’s time.

But then came her detention in one of Xinjiang’s infamous concentration camps.

On October 14, 2017, she received a phone call, asking her to come down to the county police station.

“I did everything by their [government’s] rules. In my personal life, and in my business ventures. I genuinely had no idea why they would detain me,” Nurdybai says.

Officially, her “crime” was installing the WhatsApp messaging app, now illegal in Xinjiang. However, as Nurdybai didn’t believe that it was an offense punishable by detention, she kept hoping for a court hearing, which never came. Only later would she learn that she had been deemed “untrustworthy” by the authorities, and that it was this charge that had led to her arrest.

Nurdybai would go on to spend almost a year in the camp system. She says that she managed to preserve her cultural identity through stolen whispered conversations with the other detainees in her native language, as well as through TV news, which sometimes showed segments about her ethnic homeland, Kazakhstan.

“I would see Kazakhstan in the news and dream about the day I’d be able to move there and regain everything,” she recalls.

Nurdybai thinks that her ethnicity, which is what initially landed her in “training,” is also what led to her premature release. While China-Kazakhstan relations were as friendly as ever in 2018, Nurdybai thinks that it was the international attention on the camps from NGOs and media that prompted the Chinese government to release some Kazakh detainees as a show of good will to Kazakhstan and as a sign to the rest of the world that people weren’t being locked up indefinitely.

On September 23, 2018, she was released to community surveillance, and would have mandatory Chinese-language classes every evening, despite having studied in a bilingual school and speaking Chinese fluently since childhood. Her movements in the community would be monitored by the local administration, and it took some time before she could be escorted to visit her factory. The sight she was met with was one of marauding and destruction: her equipment was gone, the space was empty and looted. All of her immediate questions went unanswered. Relatives begged her to let it be, unless she wanted to be taken back to camp.

Not long after her return home, the calls from the bank started. The payment deadline was coming up and the interest rates would rise significantly thereafter. The bank showed no interest or compassion with regard to her having been detained. They were only concerned with the upcoming payment date.

Nurdybai and her husband sold their car, his small restaurant, and their apartment in order to pay off half of the loan. Some of the money they saved for their planned immigration to Kazakhstan. After she covered a portion of the loan, the bank agreed to grant her a 1.5-year extension for the rest, which she hopes to pay off from Kazakhstan.

“The authorities really wanted me to leave the county. I think they were afraid that I would continue asking questions about my destroyed factory and maybe start speaking to journalists. So, after I applied for permission to travel to Kazakhstan, they granted it,” Nurdybai explains.

She had to write a letter of commitment in which she promised to return to China. However, a year and 2 months later, she has no plans of ever going back. Her escape to Kazakhstan, she believes, is the only thing that saved her from paying off the debt in “black factories,” the term that she uses for the widespread factory network in inner China that relies on the unfree labor of ethnic minorities.

Back with her family in Kazakhstan, Nurdybai is convinced that her experiences were the result of an elaborately planned financial trap, meant to create an additional pressure point against ethnic minorities in China.

She is not the only ex-detainee to encounter such difficulties. Ethnic Kazakh Tabysqan Magrupqan spent almost a year in camp in 2018. Prior to his detention, Magrupqan had worked as a driver in Jeminey county, and had taken out a 100,000 RMB loan as well. The bank employees had promised his wife that they would not enforce any interest rates until his release from camp, something that was allegedly guaranteed in writing in front of a local official.

However, when Magrupqan was released he discovered that the interest rates had not only remained but had actually been raised, from 4 to 8 percent. Ultimately, the debt was paid off by his father. Like Nurdybai, Magrupqan now lives in Kazakhstan with his family.

Their experiences speak to one of the undercovered aspects of the horrors of China’s camp system: Even for those who return home, financial ruin awaits them.

Safiya Sadyr is an ethnic Uyghur from Kazakhstan working as a freelance journalist for the Xinjiang Victims Database (shahit.biz).

Three years after fleeing China, an ethnic Kazakh man continues to struggle to find a safe place to land.

The Kazakh public generally remains silent about the plight of ethnic Kazakh detainees held in Xinjiang. The education system is one reason why.

By Ken Moritsugu and Jamey Keaten

The Kazakh Herders of Xinjiang

Revisiting “Winter Pasture,” an early chronicle of the hardships endured by a Xinjiang-based minority group.