Protests took place in major cities across the world on October 1 – China’s National Day – to highlight the repressive activities of the government of the People’s Republic of China (PRC) against various communities that live under its rule. I covered the protests that took place in New York City as part of the “Global Day of Action,” where roughly 150 people gathered in front of the United Nations headquarters to make their voices heard.

Hosted by movements like Students for a Free Tibet, Keep Taiwan Free, the World Uyghur Congress, and the Southern Mongolia Congress, the peaceful event brought together Uyghurs, Mongolians, Tibetans, Kazakhs, and their supporters. Dozens of banners were clearly visible to demonstrate to passing pedestrians that this was a gathering of various nationalities that had one common objective: to highlight the Chinese government’s repressive strategies and demand change. “Down, down CCP” (the Chinese Communist Party), “Free Tibet,” “Free Hong Kong” were some of the chants that could be clearly heard. Similarly, banners featured slogans like “Resist” and “Just say ‘No’ to the Chinese Communist Party,” and also displayed support for the “Independence of East Turkestan” (also known as Xinjiang). One banner also demanded that the Chinese government must be held accountable for the “genocide” that Beijing is carrying out against Uyghurs, ethnic Kazakhs, ethnic Kyrgyz, and other groups in Xinjiang.

One additional banner read “Falun Dafa is Good.” More commonly known as Falun Gong, this religious movement promotes meditation and slow-moving exercises. Due to its popularity among millions of Chinese citizens and its spiritual teachings, Beijing has cracked down on the movement, banning it as a cult.

The NYC event also had a number of speakers that discussed the Chinese government’s policies in Xinjiang, Tibet, and Inner Mongolia; the repressive activities against pro-democracy protesters in Hong Kong; and threats against Taiwan.

During the event, one phrase that was repeatedly chanted was “Shame, Shame United Nations,” given the general silence by the United Nations and many governments regarding what is happening in China. While there have been some positive developments, such as the Uyghur Human Rights Policy Act of 2020 passed by the U.S. Congress earlier this year, and pledges by major industries to cut ties with Chinese subcontractors and suppliers that use Uyghur forced labor, the repression continues. 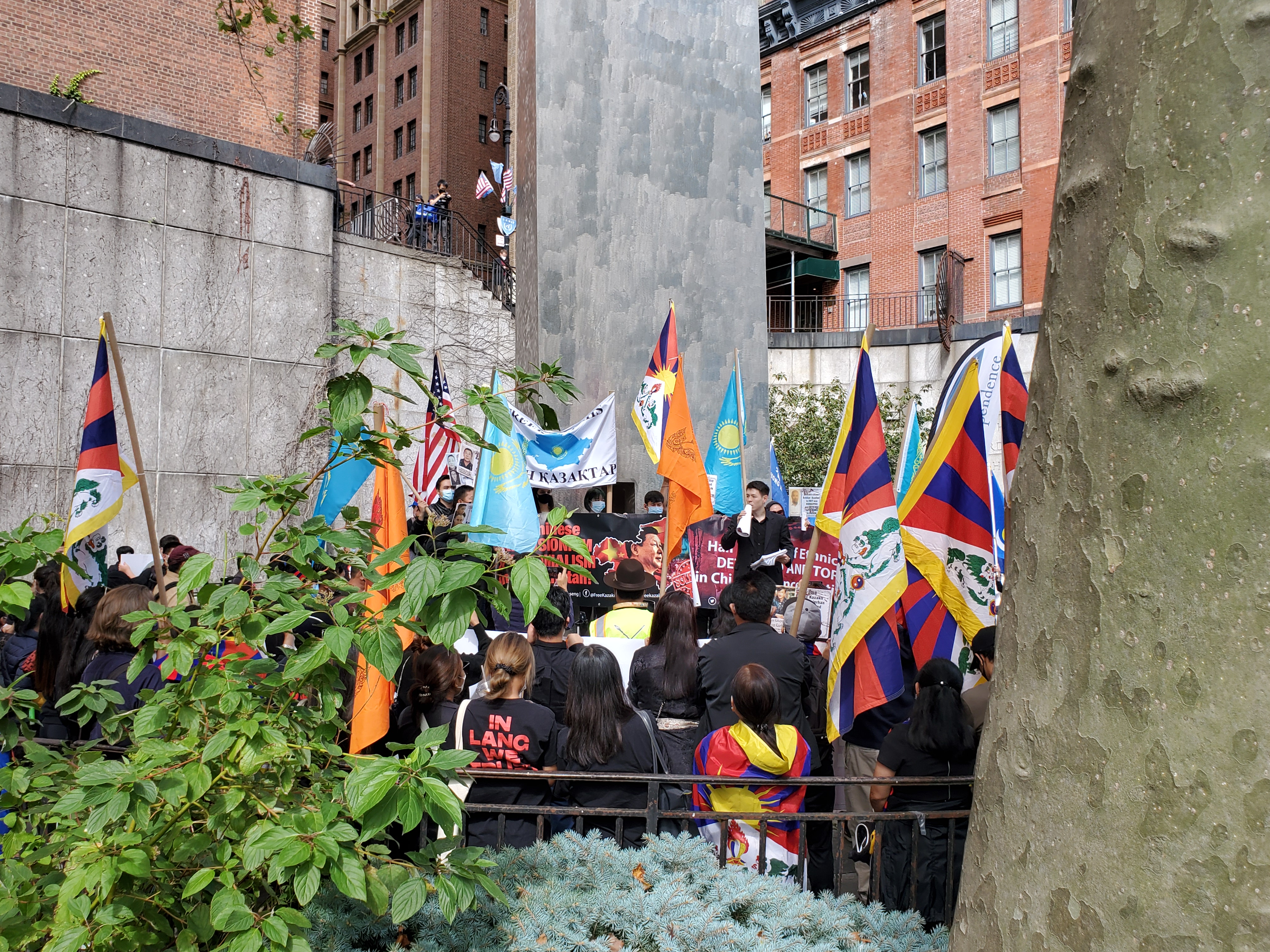 Protesters gather to listen to a speech by Gani Stambekov. Photo by Wilder Alejandro Sanchez.

In an interview with the author, Gani Stambekov, a human rights activist and founder of FreeKazakhs, discussed what he would like to see the United States and the rest of the international community do. More sanctions against key, senior policymakers in the Chinese government was one obvious tactic. Another would be to have Taiwan be recognized by more governments and admitted into organizations like the United Nations. This is a problematic suggestion, given that in recent years, several governments around the world – including the Dominican Republic, El Salvador, and Panama – have actually switched diplomatic ties from Taipei to Beijing.

It is worth noting that parallel to the NYC protest, there was a similar event in Washington, D.C., in which Representative Scott Gordon of Pennsylvania announced that he has introduced a bill to designate the CCP as a transnational organized crime group. The bill will “add the Chinese Communist Party (CCP) to Top International Criminal Organizations Target (TICOT) List and provide the United States law enforcement agencies a strategic directive to target the CCP’s malign activity.” While this bill will likely not be voted upon anytime soon given the proximity of the U.S. general elections, this is another noteworthy development that came out of this global event.

The peaceful protests in New York and around the world on Global Day of Action are not enough to convince Beijing to change its repressive domestic policies. However, it is important to maintain pressure on individual governments and also entities like the United Nations and to remind policymakers that common citizens have not forgotten about what is going on in Xinjiang vis-a-vis Uyghur repression, in addition to Beijing’s other troubling policies and strategies. Stambekov explained in his speech that ‘the Chinese dragon’ is ‘hungry’ and its tactics and policies will continue unless the international community unite to stop it.

Wilder Alejandro Sanchez is an analyst who covers defense and geopolitical issues. He is based in Washington DC.

New Zealand to Open Travel Bubble With Australia on April 19

A First-Hand View of 70 Years of China-US Relations

Chi Wang relates his experiences as a Chinese American, charting the highs and lows of China-U.S. relations from 1949 to the present day.

In New York, Protesters Mark ‘Global Day of Action’ Against the CCP

The October 1 gathering brought together Uyghurs, Mongolians, Tibetans, Kazakhs, and their supporters.

How the Olympic Movement Can Resist Beijing’s Games

The world at large cannot expect the IOC to address every issue, but the issue of genocide is too great to ignore.

Imagine not knowing the whereabouts and condition of your parents, children, brothers, sisters. For many Uyghurs abroad, that is the daily reality.

A Boycott of the 2022 Beijing Olympics Would Work

There is a massive overlap between Western liberal democracies and medal contenders in the Winter Games – enough to gut Beijing’s Olympic dreams.

How far along is China's much-hyped social credit system – and where is it heading next?

A journalist reflects on his detention by security forces, one small part of a wider crackdown on the country's media.

A crackdown on dissenting voices -- those denouncing Islamophobia and criticizing the government -- has Sri Lanka’s Muslims afraid to speak out.

People on both sides of these possibly shifting borders have strong feelings about it.

The U.S. special envoy on climate stopped in Bangladesh as part of a tour of climate change-vulnerable nations.

By Isabel Debre and Jon Gambrel

South Korea's Foreign Ministry said Iran released the tanker and its captain after seizing the vessel in January.