The Lao government’s high-risk plan to install a massive dam on the Mekong River, perilously close to the renowned UNESCO World Heritage site of Luang Prabang, shows a disregard for its legal obligations to protect the renowned site, according to conservation experts.

Minja Yang, the former deputy director of UNESCO’s World Heritage Center, told The Diplomat, “I fail to understand how the government can even think for a second of promoting such a dam project, that would turn the World Heritage site into a lake or water reservoir. The impact would be devastating.”

If this new dam project upstream goes ahead, it would eliminate the free-flow of the Mekong and Nam Khan rivers, which flank the iconic heritage city.

This was confirmed during a consultative forum convened by the Mekong River Commission (MRC) in February 2020.

Veteran heritage specialist Minja Yang, who in 1991 was UNESCO’s chief of mission for safeguarding Cambodia’s Angkor Wat and former UNESCO director in New Delhi explained, “UNESCO signed the 1995 Agreement with the Lao government based on the unique links between nature, culture, and history along the confluence of the Mekong and Khan rivers. If the site becomes a ‘lakeside’ town and no longer a riverside town, the authenticity as well as its integrity will be lost forever.”

Thailand’s CH. Karnchang has promoted the Luang Prabang dam on the basis of a feasibility study prepared by international hydropower consultant Poyry Energy, which played a major role in pushing through the Xayaburi dam back in 2001.

Poyry glibly dismissed any prospect of serious impacts on the world heritage city only 25 kilometers upstream, but failed to include any kind of heritage impact assessment (HIA) in the feasibility study submitted as part of the MRC’s consultation process.

It is amazing that for all its resources and its mandate of protecting the river, the MRC never considered consulting any heritage experts or informing UNESCO.

In fact, the Xayaburi dam project has already inflicted serious damage to the river banks, impacting the riverside of Luang Prabang. The World Wildlife Fund’s Mekong specialist Marc Goichot reports, “The erosion of the Mekong and Nam Khan river banks, and increased flooding, are aggravated by the backwater of  the Xayaburi dam which endangers the natural landscape and cultural assets of the world heritage.”  A second Xayaburi-style dam by the same Thai company will arguably aggravate the effects further. 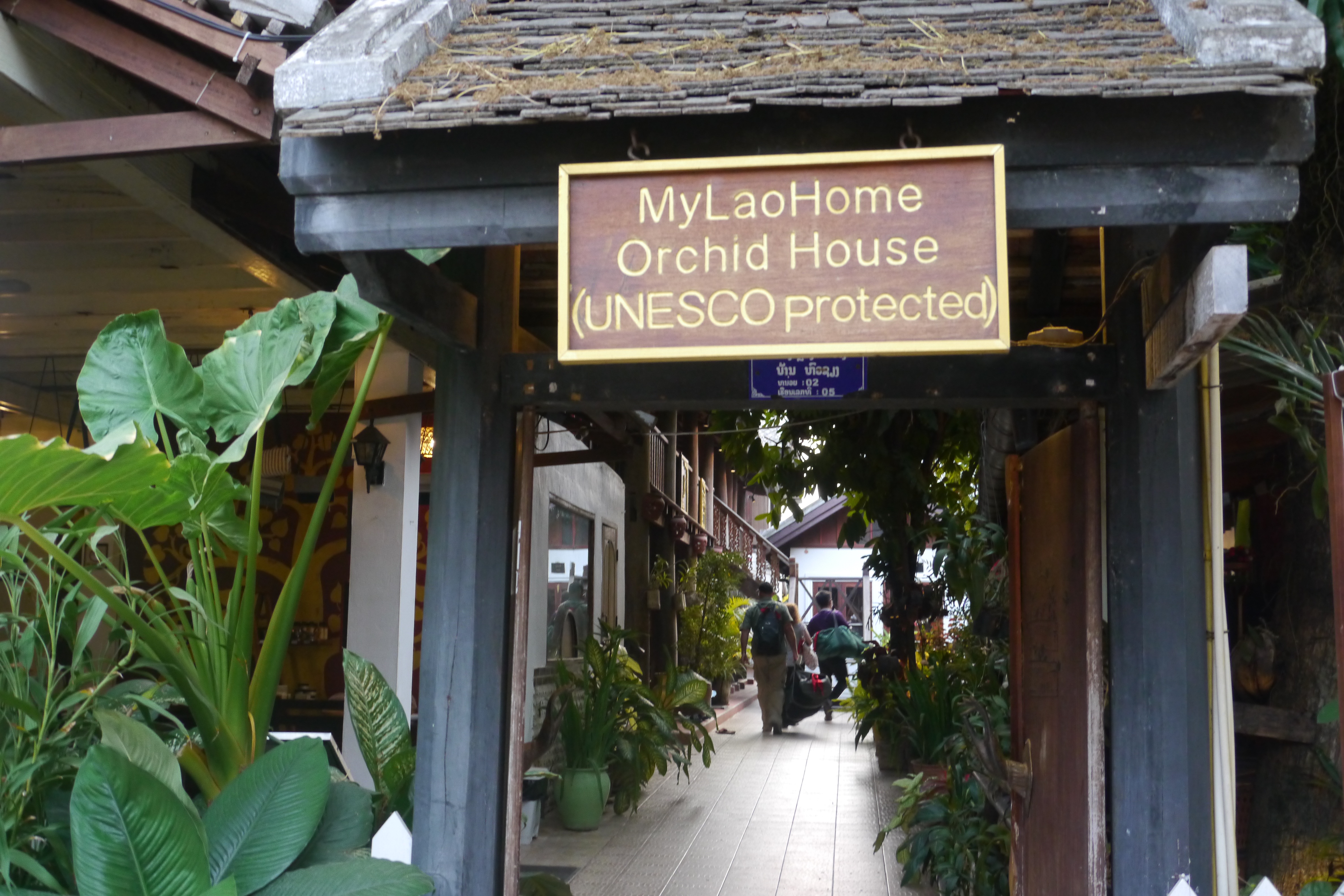 Whatever Happened to the Lao Government’s Pride in World Heritage?

Lao government ministers were once known for being proud of Luang Prabang’s world heritage status. After suffering decades of their landlocked country being best-known as the “most-bombed nation on earth,” UNESCO’s recognition of Luang Prabang’s “outstanding universal value” gave them something to celebrate. It was seen as a symbol of cultural identity and revival that also boosted ecotourism and sustainable development.

But by 2005, Laos had embarked on a very different path. With international support from the Asian Development Bank, the World Bank, and Western government aid agencies, Laos sought to become the so-called “battery of Asia,” hatching plans to dam almost all its major rivers in order to generate electricity.


The internationally protected heritage zone of Luang Prabang was never considered by the Ministry of Energy as an area to be spared from their all-pervasive hydropower designs.

Of a planned cascade of nine dams on the lower Mekong, two have been completed: the Thai-built Xayaburi and the Malaysian-built project Don Sahong, close to the Cambodian border. Dam fever is virulent and Laos looks ready to sacrifice an iconic cultural site and a prime tourism asset for another dam. 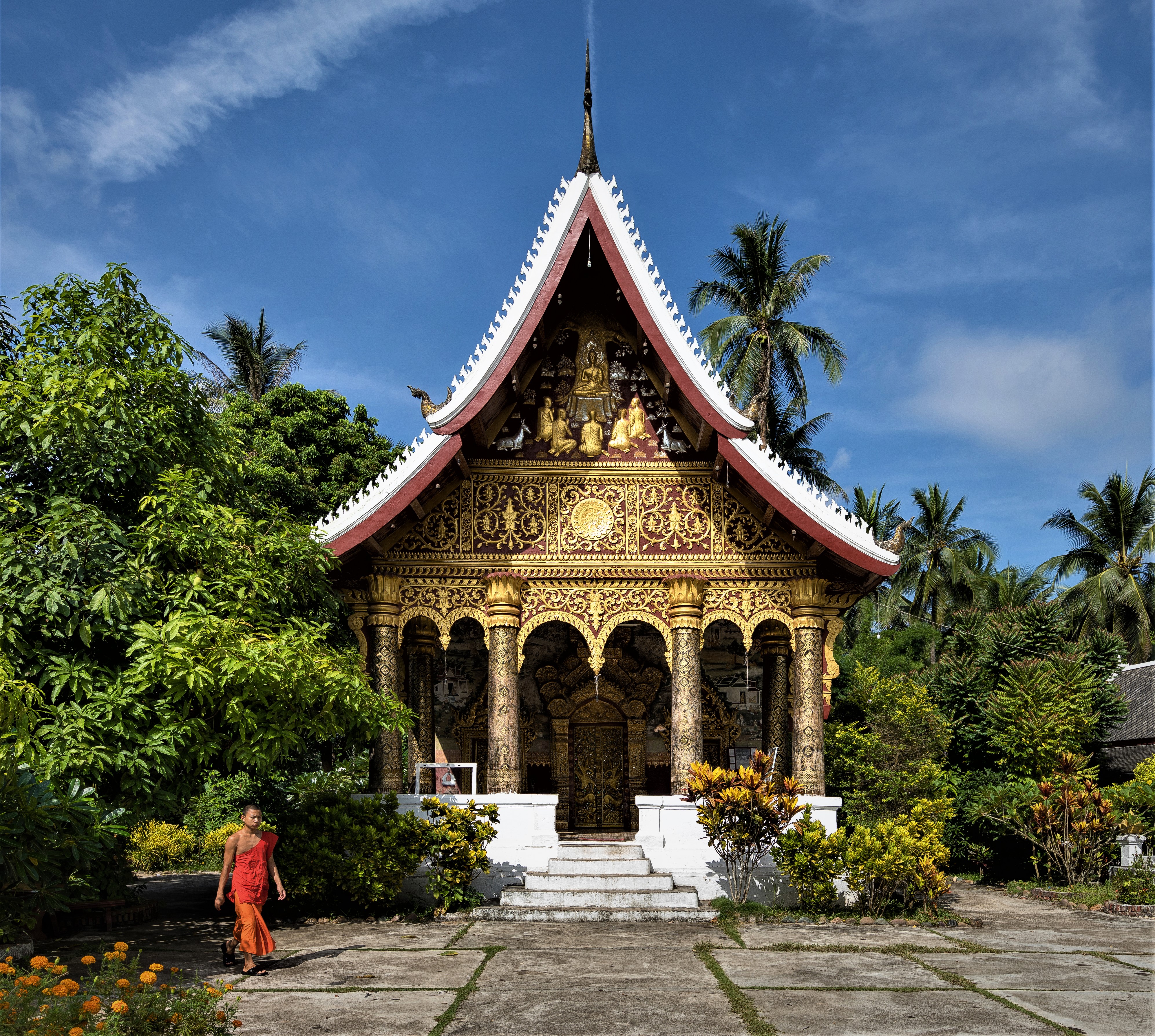 The Wat Pa Phai Buddhist temple in the ancient city of Luang Prabang. Five hundred years ago the town was the regional center of Buddhism. Photo by Basile Morin / Wikimedia Commons

What Can UNESCO Do?

UNESCO’s World Heritage Center, based in Paris, attempts to ensure the good maintenance and protection of recognized heritage sites around the globe. But it was slow to react to the impending collision between hydropower and heritage on the Mekong.

Once the center had been warned of the danger, Dr. Mechtild Rossler, director of the World Heritage Center, wrote to the Lao government and pushed for the setting up of a heritage impact assessment (HIA) in April 2020.

In response to questions from The Diplomat she insisted that the HIA “should be based on strong risk analysis.” Rossler has also reminded the Lao government that dams are incompatible with world heritage status if the project lies within the boundaries of the heritage site.

The specter of a huge 1,400-megawatt dam starting construction soon has put Laos on the risk agenda for the 44th session of the annual World Heritage Committee of U.N. member states. Unfortunately, the committee’s July conference was postponed by COVID-19, and it remains unclear when it will eventually be convened.

In spite of World Heritage Center’s deep concerns and a flurry of emails about carrying out a HIA (which should have been carried out years ago), the Lao Ministry of Energy has nonetheless steamed ahead with an almost completed access road to the dam-site.

UNESCO and World Heritage Center attempts to urge Laos to honor its legal obligations to protect the precious cultural site are said to be too tame, too diplomatic, and insufficient to persuade the Communist Party’s Politburo to seriously consider suspending the dam project.

However there is a roadmap for the World Heritage Center to exert further pressure. A UNESCO official explained: “It starts with sending a Reactive Monitoring Mission. If the issue drags on, this could escalate eventually to seeing the site included on the World Heritage List in Danger,” adding one more to the endangered list alongside 53 other sites currently named and shamed. 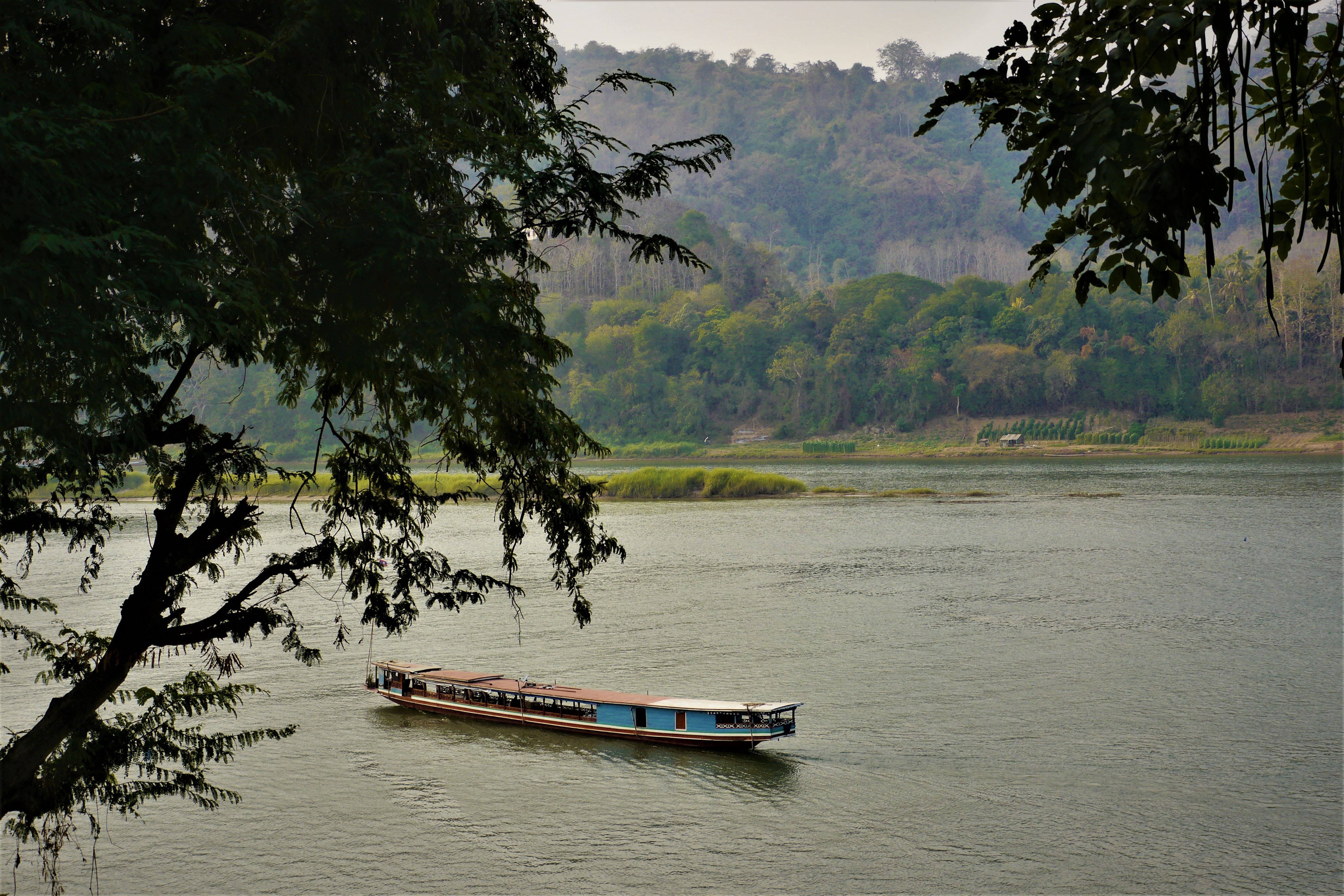 Is the Tide Turning Against Dams on the Mekong?

The dynamic Chiang Khong conservation group, supported by a network of Thai NGOs, has been campaigning for two decades against a frenzy of dam-building that has forced the mighty Mekong River into a struggle for its ecological survival.

Now the tide appears to be turning. The movement has just been strengthened by the formation of a Mekong People’s Council to represent the interests of communities in the eight provinces bordering the Mekong. The newly-formed council aims to increase local’s lobbying impact and empower civil society to have a greater say in decision making on development projects in the Mekong Basin.

The latest Lao dam project, the Sanakham dam located close to the border with Thailand, has provoked Somkiat Prajamwong, the Secretary General of Thailand’s Office of National Water Resources, to invoke Article 7 of the Mekong Agreement, which created the MRC, in order stop the project.

In the 25-year history of the MRC this is the first time Article 7 has ever been considered as a measure to counter the relentless rolling out of new Lao dams. Somkiat also noted that Thailand’s Ministry of Energy says the country has plenty of power reserves and didn’t need to buy any more from Laos.

The campaign against the harmful impacts and damage done by the Thai-built Xayaburi dam to river flows, fisheries, and agriculture has piled pressure on the Thai government not to buy electricity from the planned Luang Prabang dam and other future projects. 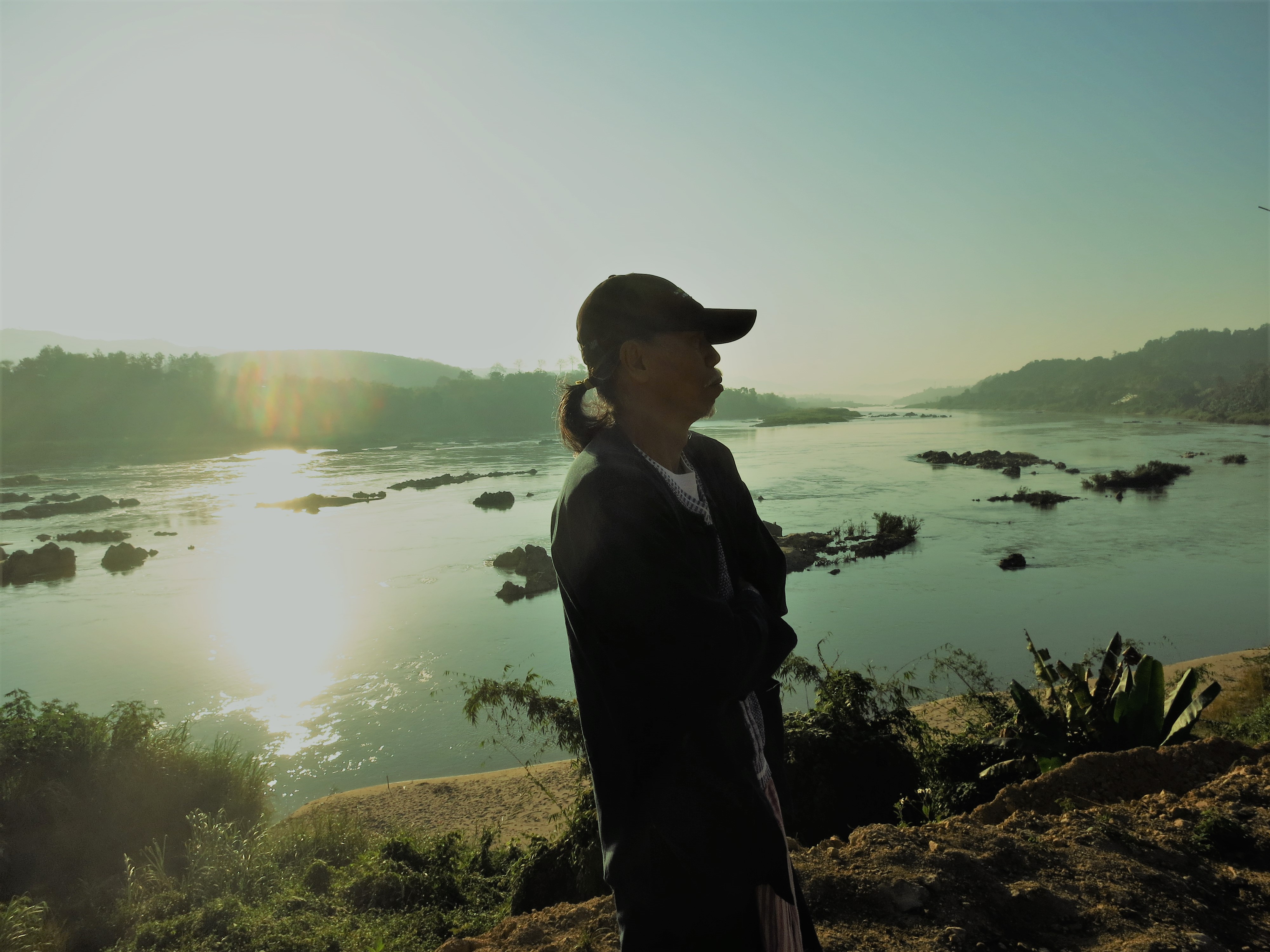 Community leader Niwat Rokaew has led a 20-year campaign against damming the Mekong. He is a co-founder of the newly-formed Mekong People’s Council. Photo by Tom Fawthrop.

But even in the event that the Thai Ministry of Energy decides to sign a deal in 2021, UNESCO has chalked up some victories in blocking obtrusive infrastructure projects from going ahead, and could still steer the Lao government away from itscurrent course.

In September, Rossler had a Zoom meeting with the UNESCO delegations of Laos, Vietnam, and Thailand in order to express grave concern and seek clarifications on the countries’ future dam plans.

If the Lao government does not respond to the World Heritage Center’s proposals and warnings and refuses to delay the launch of the dam, then UNESCO’s last resort is to remove Luang Prabang’s heritage status. This has only happened twice before.

Although every World Heritage site is hosted by a country, its governance is based on international rules for the protection of these cultural assets for all humanity, and not the sole discretion of the state’s authorities. Heritage experts recoil in horror at the prospect of losing Luang Prabang.

Has the Lao leadership really grasped the full consequences of losing their precious World Heritage status, especially by flouting the rules of international conservation? Not only would it be a huge blow to the nation’s pride; it would also incur the wrath of conservationists around the globe.

Minja Yang sees a stark choice for Laos and the world. “If we lose Luang Prabang,” she warns, “we will lose a very unique site that will be lost to humanity. Once the damage is done, it will be irreversible. it cannot be undone. The dam will become obsolete in a few decades or less, while centuries of Luang Prabang’s history, so important for future generations of Laotians and the world, would be damaged or lost forever.”

The Phou Ngoy dam is one of nine hydropower projects that the Lao government is planning on the mainstream of the Mekong River.

The dam near Luang Prabang - both a World Heritage site and an seismically active zone - is “an irresponsible gamble,” experts argue.