In 2012, China was received with wide open arms in Central and Eastern Europe, as it put forth its 16+1 mechanism, which was later expanded to the 17+1 with the addition of Greece. Almost 10 years later, what was probably China’s biggest disappointment in Europe paradoxically happened right in these 17 countries. Almost all of them have signed memoranda of understanding with the United States targeting Huawei’s access to their 5G networks or joined Washington’s Clean Network initiative – a kind of containment maneuver aimed at Huawei and other Chinese tech companies.

These Central and Eastern European (CEE) countries were supposed to be China’s gateway to Europe; instead they have become its biggest headache. What happened to the 17+1 mechanism, which just hosted its eighth high-level summit on February 9?

It is very hard to define the 17+1 mechanism, just as it is hard to define the BRI. China has never clearly articulated its purpose, preferring loose concepts that can easily be promoted. The undefined and shifting nature of the mechanism led to numerous perspectives about its purpose. For the United States, the 17+1 mechanism is China’s tool to create a sphere of influence in Europe by using soft and hard power; for the European Union, the 17+1 is a mechanism whose ultimate goal is to divide the Union. For the CEE region, however, it is just an annual summit featuring a plethora of unfulfilled promises and projects.

When it was proposed, almost 10 years ago, the then-16+1 mechanism was received with a lot of enthusiasm and hope. A big power wanted to inject money in the CEE region: to build infrastructure, to revive old factories, to invest in people and local projects that couldn’t find Western investors. Or, at least, that was the narrative. Amid the enthusiasm, a race began among CEE countries to become “China’s gateway to Europe.” But as the years went by and promises remained just words, the finish line never came into sight. Many decided that it was just a marathon to nowhere.

How did this happen? To be blunt, China failed in juggling expectations and achievements. All the appealing promises and proposals and the bombastic headlines of the first years of the 16+1’s life came back to haunt Beijing when most CEE countries failed to see consistent investment. Instead of infrastructure, they received forums; instead of factories they received exchange programs; and instead of exports they received summer camps. On those metrics, the 17+1 might still be active, but it’s not what CEE countries were hoping for. And this is how the 17+1 mechanism has transformed into a zombie mechanism.

Just as China has zombie companies, which are no longer profitable but are kept alive through cheap loans or state aid to avoid the problems that closing them down would generate, it now also has diplomatic zombie mechanisms. China’s communist political culture doesn’t embrace admitting mistakes and quickly abandoning failing projects. It prefers to keep them going and present them as a success. So, if the 16+1 didn’t have a single well-known successful investment story, the solution was simple: just add Greece, in order to be able to say that the Port of Piraeus is a successful 17+1 project. But this doesn’t change the fact that the 17+1 is just a zombie mechanism, with yearly high-level summits that produce nothing but photos and communiques.

From the beginning, China had a bad approach to the CEE and lacked a long-term strategy. First of all, China treated the 16 (now 17) CEE countries as a monolith, without caring very much about their diversity of visions, policies, perspectives, or backgrounds. China also completely ignored the “Russian factor,” which makes many CEE countries, especially those from the eastern flank, prone to side with the United States. So when these countries had to choose, they chose Washington. Secondly, China didn’t clearly communicate its intentions with the 17+1 mechanism, so that even its members didn’t know Beijing’s goals. Finally, China simply failed to deliver on its economic, investment and trade promises, which had made the 17+1 mechanism appealing for the CEE in the first place. Disappointment toward China had been steadily building in many CEE countries because of postponed or unfulfilled projects, but Beijing didn’t do anything to address this problem.

Sometimes it is hard to accept defeat, just as it is hard to transform a promise into reality. Most Chinese companies are ultimately driven by profit, so one can imagine how difficult it was for these companies to transform promises and propaganda into reality. From a purely economic perspective, the CEE region isn’t as attractive as Western Europe, because it is less developed and has lower buying power. The region also has infrastructure problems and a low population density, making investments in highways or high-speed railways less profitable than in other regions.

All these factors affected China too. Chinese companies didn’t find the region very attractive. Because they also put profit ahead of other factors, projects failed to get off the ground. So, flagship projects like the Cernavoda Nuclear Power Plant or the Budapest-Belgrade railway, which could have brought influence and political and image gains for China, have been either abandoned after cumbersome negotiations or repeatedly delayed. Chinese companies also encountered difficulties dealing with EU regulations, especially in the areas of infrastructure and public procurement.

And this leads us to another problem of the 17+1 mechanism that China didn’t manage very well: the EU’s fear of division, which created distrust of China. The EU accusing China of “divide and conquer” tactics has become a staple of EU-China relations. But China didn’t want to keep a low profile with the 17+1, for example by scaling its annual summits back to biennial ones. On the contrary, Beijing even upgraded the mechanism, with President Xi Jinping hosting the summit this year instead of Premier Li Keqiang. That only increased the EU’s criticism.

Instead of slowly scaling back the 17+1, China is doubling down, but this time absent much enthusiasm among the CEE countries. That was best shown by countries like Bulgaria, Estonia, Latvia, Lithuania, Romania, and Slovenia – over one-third of the 17 – which sent lower level officials instead of presidents and prime ministers, who could have easily participated in this year’s virtual summit. China might not accept it, but many in the CEE have realized that the 17+1 is just a zombie mechanism and more involvement won’t necessarily bring more investments.

Ironically, countries that once rolled out the red carpet for Chinese companies to build their infrastructure are now closing the doors altogether, even as Chinese companies have become more active in public tenders. Months after canceling China General Nuclear Power (CGN)’s involvement in building the Cernavoda Nuclear Power Plant, the Romanian government, through its deputy prime minister, announced that it is considering banning Chinese companies from participating in infrastructure tenures, because – just like other companies – if they lose, Chinese companies tend to appeal the decision and thus delay the implementation of the projects. In a twist of fate, in the same week, news came from Czechia that CGN will be excluded from taking part in the public tender to build the Dukovany Nuclear Power Plant. Interestingly, while these CEE countries, supposedly close to China, slammed the door to CGN, the Chinese company is still involved in nuclear projects in the U.K.

Romania not only plans to restrict Chinese companies from its transport infrastructure, but also from its digital infrastructure. Romania was the first country that signed an MoU with the U.S. government to restrict companies like Huawei from building its 5G infrastructure. Thus Romania opened the floodgates for other CEE countries like Poland, Estonia, Latvia, Czechia, Slovenia, Albania, Lithuania, Greece, Bulgaria, Slovakia, and North Macedonia, which also signed such MoUs with the United States or joined Washington’s Clean Network initiative. Even Serbia, one of China’s closest friends, accepted a clause targeting Huawei, in an MoU signed with Kosovo, but brokered by the United States. Instead of being a Chinese bridgehead in Europe, Central and Eastern Europe ended up one of the most restrictive regions for Huawei, which is one of Beijing’s most sensitive geopolitical topics. 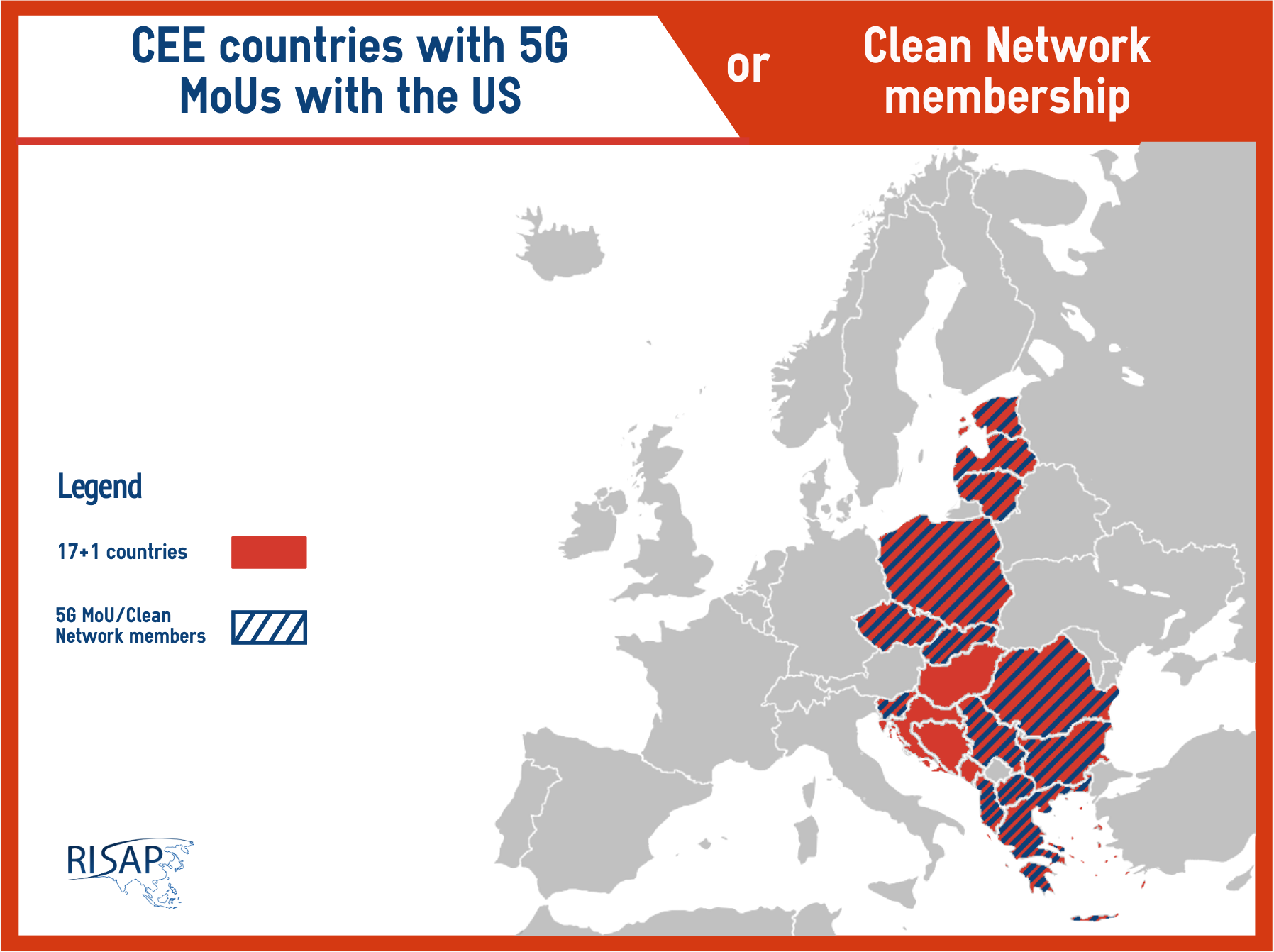 Infographic by the the Romanian Institute for the Study of the Asia-Pacific (RISAP), used with permission.

That is how the 17+1 mechanism became a zombie mechanism that doesn’t do much except host glitzy annual summits. And if the format remains unchanged and China fails to adjust not only the 17+1, but also the BRI, to the new realities, these signature projects won’t help China’s rise, but sabotage it. There are even rumors that some countries may exit the mechanism entirely.

In the meantime, despite Xi Jinping’s speech at Tuesday’s summit, in which he asserted that “17+1 could make more than 18,” the 17+1 continues its lifeless march to nowhere.

China-Poland Relations Amid the Ukraine War

By Lunting Wu and Kamil Matusiewicz

From riding high at the Beijing Olympics, China-Poland relations have faltered due to the nations' opposing approaches to Russia's invasion of Ukraine.

On its own, a Slovak delegation’s recent trip to Taipei might not spark alarm in Beijing. But it’s part of a larger trend of disillusionment in the CEE region.

Engaging China in 17+1: Time for the ACT Strategy

China has managed to build a system of interconnected relations in Central and Eastern Europe. How should the region respond?