From the streets of Yangon to the mountain strongholds of ethnic peoples, the diverse peoples of Myanmar are forging a rare unity in their nationwide mass protests against the February 1 military coup.

Junta leader General Min Aung Hlaing had not expected his surgical coup, which toppled Aung San Suu Kyi’s National League for Democracy (NLD) government and shut down parliament, would unleash one of the biggest civil disobedience movements of all time, and the largest general strike in the country’s history

The Civil Disobedience Movement (CDM) has inspired civil servants, doctors, nurses, railway workers, copper miners, and engineers to refuse to work for the  “illegal regime.” The movement has brought almost all civil services and other government administration grinding to a full stop, not only in the big cities of Yangon and Mandalay but also in the ethnic states.

The junta had expected to sow divisions by exploiting the bitter disappointment felt by millions of ethnic peoples over the failure of the NLD government to do anything to enhance their rights. Even Myanmar’s democratic leaders showed weak regard for ethnic groups’ demands for autonomy and social justice based on the 1947 Panglong Agreement.

However, the decision was not always easy. The Mon United party was far from united on this question, and after a stormy debate among their executive members, a majority agreed to send a representative to the SAC. This controversial decision was widely condemned by Mon communities and triggered many resignations.

The military had been counting on anti-NLD sentiment to keep different ethnicities alienated from Myanmar’s majority ethnic group, the Bamar, the main source of NLD support.

Naw Zipporah Sein, former vice president of the Karen National Union (KNU) understands this widespread ethnic distrust of the NLD. But she told The Diplomat that “although the NLD leaders have shown very little knowledge or respect for ethnic peoples when they were the running the government, but now is the time for unity.”

“We have to put our differences aside,” she emphasized. “The coup is everybody’s enemy.” 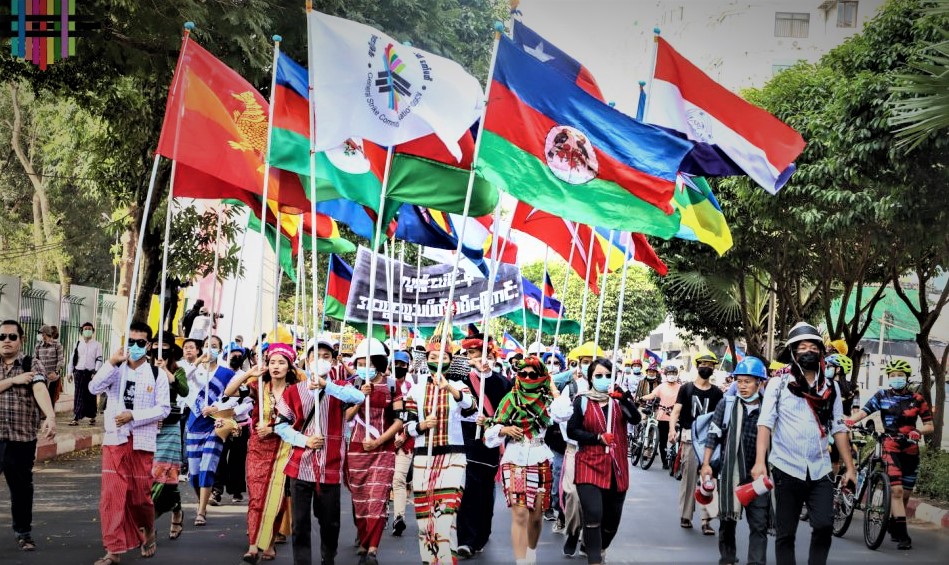 The Shan Nationalities League for Democracy (SNLD) based around ethnic Shan people is one of the strongest ethnic political parties. It won 42 seats in the 2020 election. In a similar vein to the KNU, the SNLD strongly advocated for a position of unifying all parties against the coup.

It came as another  blow to the junta’s game plan when the 10 ethnic armed groups that are part of a floundering Nationwide Ceasefire Agreement (NCA) announced on February 20 that they would  no longer negotiate with the military government, and will support efforts to topple it.

Their statement read “We support the Civil Disobedience Movement (CDM) and public protests against the military coup and military dictatorship, and we are going to find ways to support these movements and protests.”

The military has most reason to be nervous about two out of the 10 ethnic armed organizations (EAOs) in this grouping: the Restoration Council of Shan State and the Karen National Union, which each administer and control significant territory. Another strong resistance force in the far north, the Kachin Independence Organization, has warned that its armed wing, the Kachin Independence Army, may take action to prevent the Tatmadaw from shooting unarmed demonstrators.

The wooing of ethnic parties has resulted in a succession of snubs, with the biggest exception being the Arakan National Party (ANP), which placed third in the 2020 general election with four seats. The NLD government’s enthusiastic backing of a vicious military campaign against the Arakan Army in Rakhine State, and the resulting displacement of 200,000 mostly Buddhist villagers who were forced to flee their homes, was hardly a great vote-winner. However many ANP party supporters and almost 50 Rakhine civil society groups condemned the party’s decision to send a representative to join the SAC. Many youth members quit the party in protest.

But by far, most ethnic peoples have resoundingly rejected military rule, making their views known within the broad-based movement. This has given them a new visibility in anti-coup rallies and the CDM.

Predictions that the junta could quickly crush the opposition have proved to be unfounded. The 2021 movement is not like the 1962 coup, nor the uprisings of 1988 and 2007. Back then, there was no social media presence in Myanmar and ethnic states had no chance to learn about what was happening in Yangon.

This time, the social media and info-tech savvy youth, known as Generation Z, have made a major difference in keeping communication flowing and getting information out, even when the military junta shuts down the internet. Never has the Tatmadaw been under so much pressure, and on so many fronts. In that sense, one victory has already been achieved: the Myanmar military has lost its aura of invincibility.

The support from ethnic groups is immensely significant for the CDM. Ethnic minorities, with an estimate population of 17 million account for around one-third of Myanmar’s total population.

In the early days of protest in Yangon and Mandalay, the demands, placards, photos, and slogans of street protests were all about freeing “Mother Suu,” the nickname of NLD President Aung San Suu Kyi, who was arrested (along with the other NLD leaders) on the first day of the coup.

Aung San Suu Kyi is idolized by her hard-core NLD supporters. Their banners and placards read “Release Mother Suu,” referring to many Bamar people’s depiction of her as the mother of the nation. They held the party’s flags and clutched photos of Aung San Suu Kyi. These images strengthened the narrative of the coup as only a fight between the military and the NLD.

But this obsessive focus on just one of many political prisoners tended to alienate and offended those who are aware of her terrible human rights record in office since 2015. A Rakhine journalist spoke for many ethnic minorities about their view of Aung San Suu Kyi’s governance from 2015-2020: “I felt abandoned when she remained silent as the military committed alleged war crimes and crimes against humanity against the Kachin, Shan, and my own Rakhine people,” Kyaw Hsan Hlaing wrote for Frontier Myanmar. “…I cannot support a government that does such things.”

It is understandable that many people living close to these war-zones, while condemning the coup, are not clamoring for the restoration of Suu Kyi’s government.

But in an important development, the mass protests have since moved on with other narratives and visions of a future democracy. The General Strike Committee has uniquely managed to collect 24 ethnic minority groups and also the NLD under the same umbrella. “We respect the vote of the people in the 2020 general election, and will strive to remove the 2008 constitution that always allows military dictatorship and military might, to hold sway over the nation legally,” the committee vowed.

Increasingly activists view the experiment of a hybrid government, with the NLD sharing power with the Tatmadaw, as a failure that should not be repeated within the framework of the discredited 2008 constitution. The constitution, passed under a military-backed government, reserves outsized political influence for the Tatmadaw, regardless of election results.

The KNU’s Zipporah Sein, a member of the group’s negotiating team for peace talks, concluded that “The NLD’s attempt to amend the constitution has failed.” She added, “Likewise the coup bears witness to the fact that it is impossible to amend the 2008 Constitution via the political dialogues based on the NCA and in the parliament.”

However as the Civil Disobedience Movement, with full-throated support from Generation Z and ethnic participation, blossomed, flourished, and coalesced, the demands have veered away from an exclusive focus on releasing NLD leaders and restoring the pre-coup status quo. The ethnic narrative that calls for scrapping the much- detested 2008 constitution is now a main theme of demonstrators not only in the far northern Kachin capital of Myitkyina and Shan State’s Taunggyi, but also increasingly in Yangon and Mandalay

This multi-ethnic nation has long been divided by ethnicity, dominated by the lowland majority ethnic group known as the Bamar, and oppressed by the highly centralized military regimes. This is the kind of dysfunctional union that the minority ethnic peoples, joined by most of the young generation, are committed to changing. As Kyaw Hsan Hlaing wrote: “The current upheaval is devastating, but it also offers a great opportunity. As we join together in opposing military rule, we must also unite under a positive vision that values the rights of all. It is a critical moment in our history, and it must not be squandered.”

With so many ethnic political parties rejecting all offers from the new regime, and the mass CDM boycott bringing administration, banks, and vital parts of the economy grinding to a halt, it may prove impossible for the regime to quell the protests and consolidate its rule – in short, the country could become ungovernable. The specter of a failed state in Southeast Asia is sure to motivate a flurry of secret diplomacy, but if any eventual agreement excludes Myanmar’s youth and ethnic peoples, it is hard to see how it represent a solution.

Tom Fawthrop covered the Saffron Revolution in The Guardian and has published features on Myanmar with The Diplomat, The Economist, and the South China Morning Post.

Myanmar Coup: The View From Yangon

Residents in Myanmar express their alarm, anger, and sense of deja vu over the February 1 coup.

Inside the country, and in exile, Myanmar’s free media organizations strive to get the story out despite a brutal crackdown.

New Delhi is clearly making a push to expand its capabilities in the critical semiconductor industry.