When the local government of Almaty, the largest city in Kazakhstan, authorized a march organized by several feminist collectives, observers rubbed their eyes, surprised: It was the first time in the history of the country.

The organizers then planned a 5-kilometer march along Shevchenko Street, one of the main streets of the “golden quarter,” the historic center of the city.

On March 8, International Women’s Day, the city woke up, like every year, to bustling crowds of men carrying freshly-bought flower bouquets to bring back to their loved ones and smiling women strolling with bags full of presents and flowers. Dozens of activists, however, had organized a demonstration poised to become historic.

A first picket was planned at Gandhi Park, where onlookers curiously asked the reason for the unusual police presence and the colorful crowd gathering up around midday. Around 100 policemen and plain-clothed secret service officers quietly observed the forming of a cluster of demonstrators, with banners and feminist messages on their clothes and face masks. 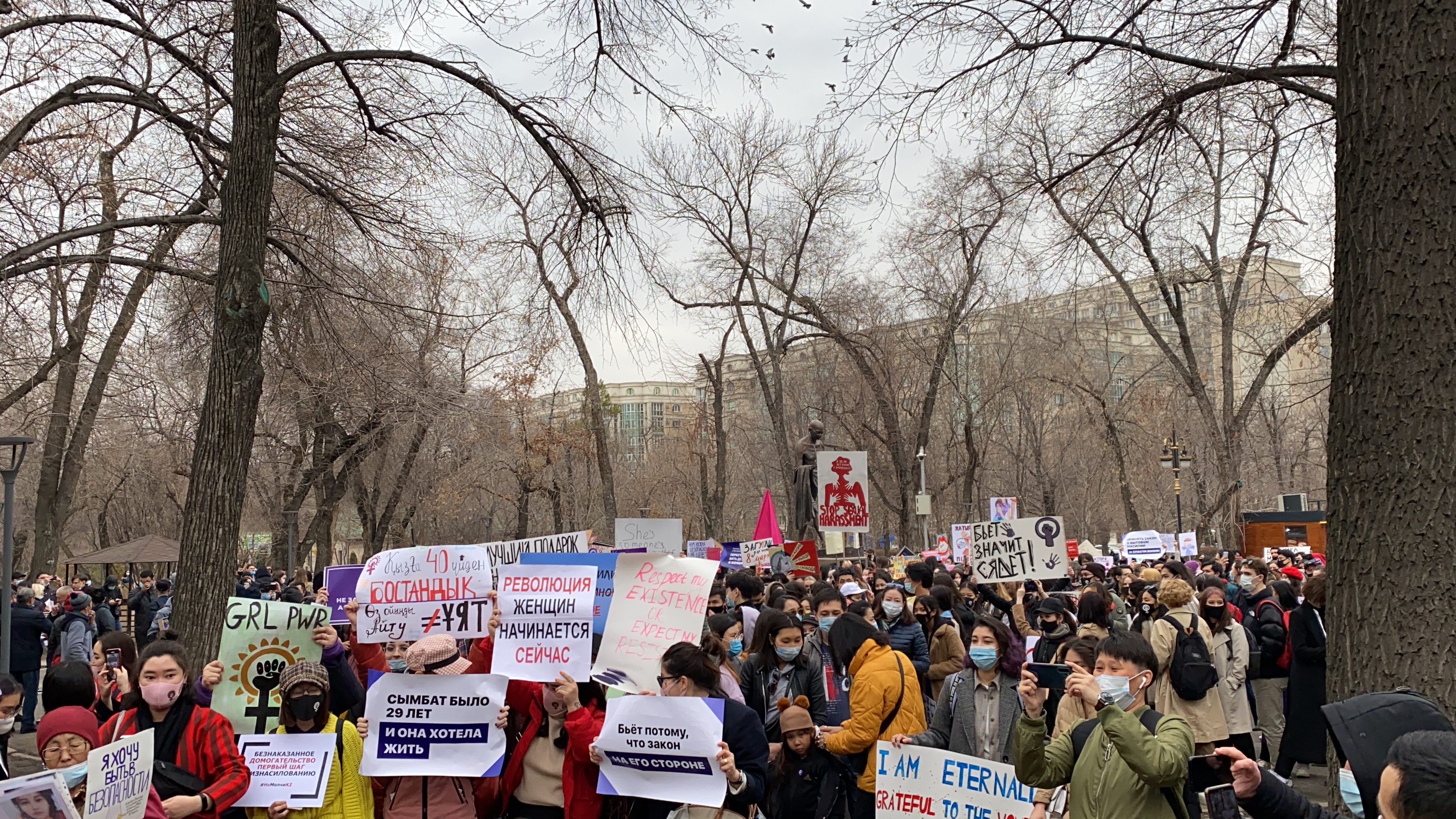 Demonstrators gathered near the statue of Mahatma Gandhi in Almaty, Kazakhstan. Photo by Paolo Sorbello.

At the start of the march, a rough count of the demonstrators showed that around 500 people had taken part. Along Shevchenko Street, closed to traffic for the occasion, dozens more joined, either physically entering the march, or waving from the windows.

A wide range of people, from the LGBTQ+ community to disabled women, participated in the rally, which was organized by several feminist activist collectives: KazFem, Feminita, FemAgora, FemSreda, and SVET. 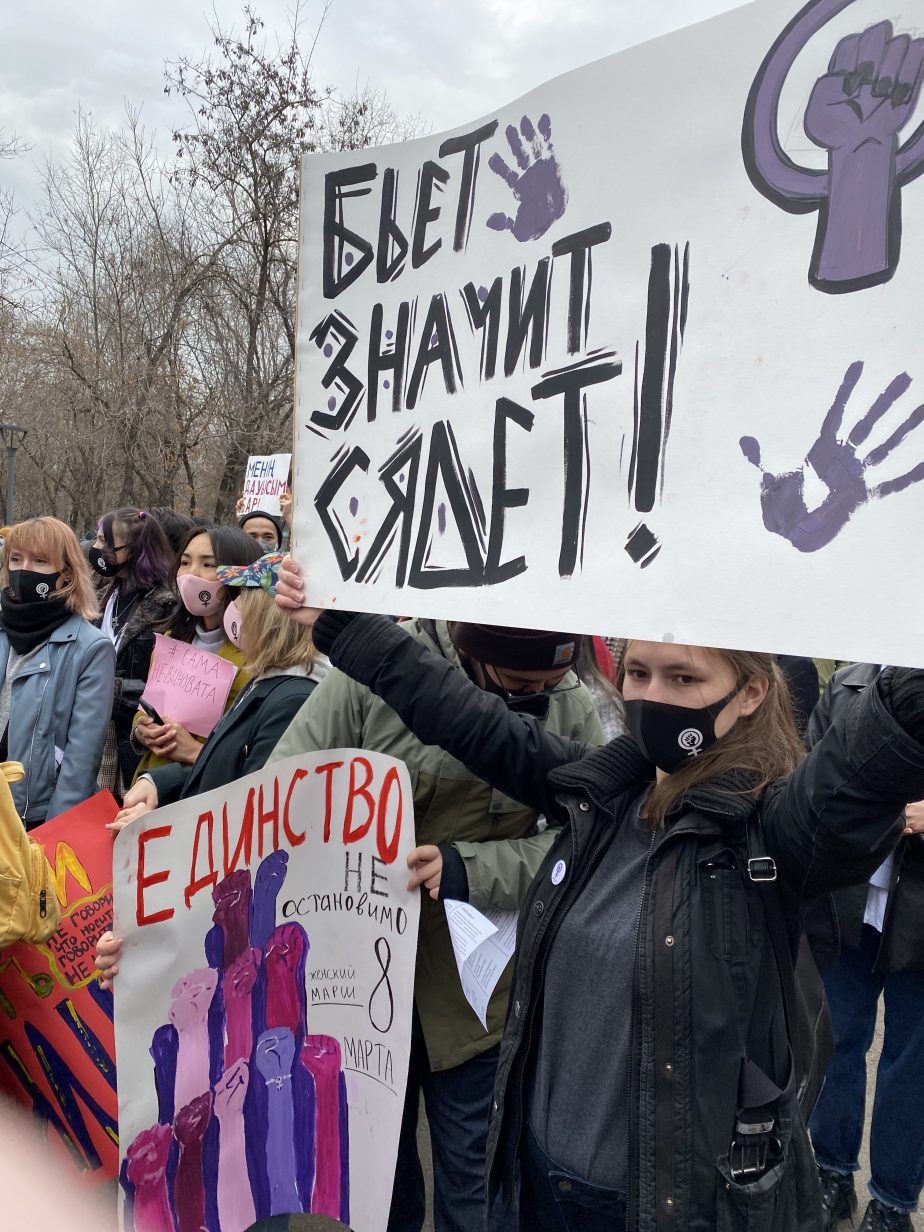 A woman holds a sign at the Women’s Day march in Almaty, Kazakhstan. Photo by Paolo Sorbello.

Under the loud chants of “all people are sisters,” “who beats should serve [time in prison],” and “feminism will save Kazakhstan,” the crowd went along undisturbed by the authorities, who watched quietly on the margins. Such a composed reaction for a hundreds-strong rally is unprecedented in Kazakhstan.

In 2016, when around a thousand assembled in the central square in Atyrau, in the west of the country, against amendments to the Land Code, the police dispersed the crowd and arrested the organizers. Since Nursultan Nazarbayev resigned in March 2019, frequent protests of smaller size were met by police brutality in a tense climate.

Perhaps one of the reasons for the clemency was the ostensible absence of the regime’s main enemy, Mukhtar Ablyazov, the fugitive banker-turned-oppositioner. A dozen of his supporters tried to steer the attention of the media toward their demand for political change at the beginning and in the final hour of the rally, without success.

Another possible reason for the lack of repression could be the bad press that the government received after exerting pressure on several human rights activists and NGOs in the past months. The international resonance of the severe charges against NGOs led the government to backtrack on its strategy.

The influence of sexism and the patronizing disregard for “feminism” – a word that makes many cringe with disgust in Kazakhstan – could have, paradoxically, given room for action to the organizers of the rally. Their slogans and ideas were seen as non-political and non-threatening. 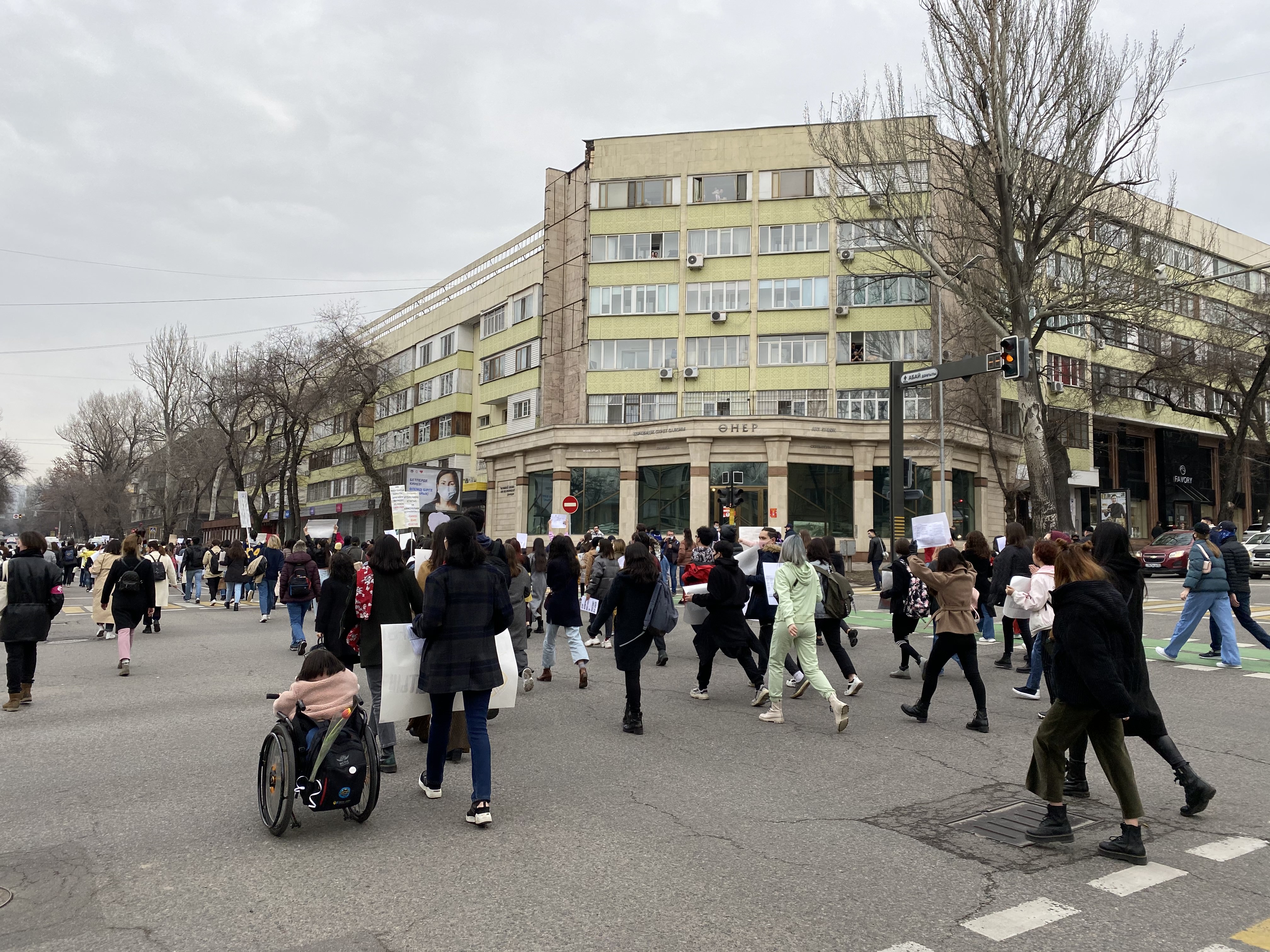 A variety of people joined the march in Almaty, Kazakhstan. Photo by Paolo Sorbello.

Effectively, however, feminist movements in Kazakhstan have everything to do with politics, similarly to other countries and contexts. Their plans to achieve better working conditions, stricter laws for domestic violence, and ultimately abolish the patriarchy are political programs in their own right.

Last year, although unauthorized, a smaller rally took place in Almaty. Around 200 activists gathered in a central pedestrian street and marched together. That event was also unprecedented: In 2017, only about two dozen activists took the streets for the first time to march for women’s rights.

In 2018, FemAgora, a newly-established organization, set up a two-day festival of workshops and talks about gender equality. The festival has since continued, raising awareness among women and the LGBTQ+ community.

Aery Asiyeva, one of the organizers of the 2021 rally and a member of KazFem, told The Diplomat that the rally was to be considered a success.

“We worked for months to organize the biggest feminist march in Kazakhstan’s history. We were pushed back by nationalists and right-wing traditional groups, but the support we received from donations and volunteers was our strength.”

Especially important for the organizers was the mass participation during an unsafe period, as people were fearful of going to a mass gathering during a pandemic. Every participant wore a face mask.

At Valikhanov Square, where the march concluded, several organizers and participants spoke from the podium to an orderly crowd, which tried to respect social distancing to minimize the risk of spreading the coronavirus. 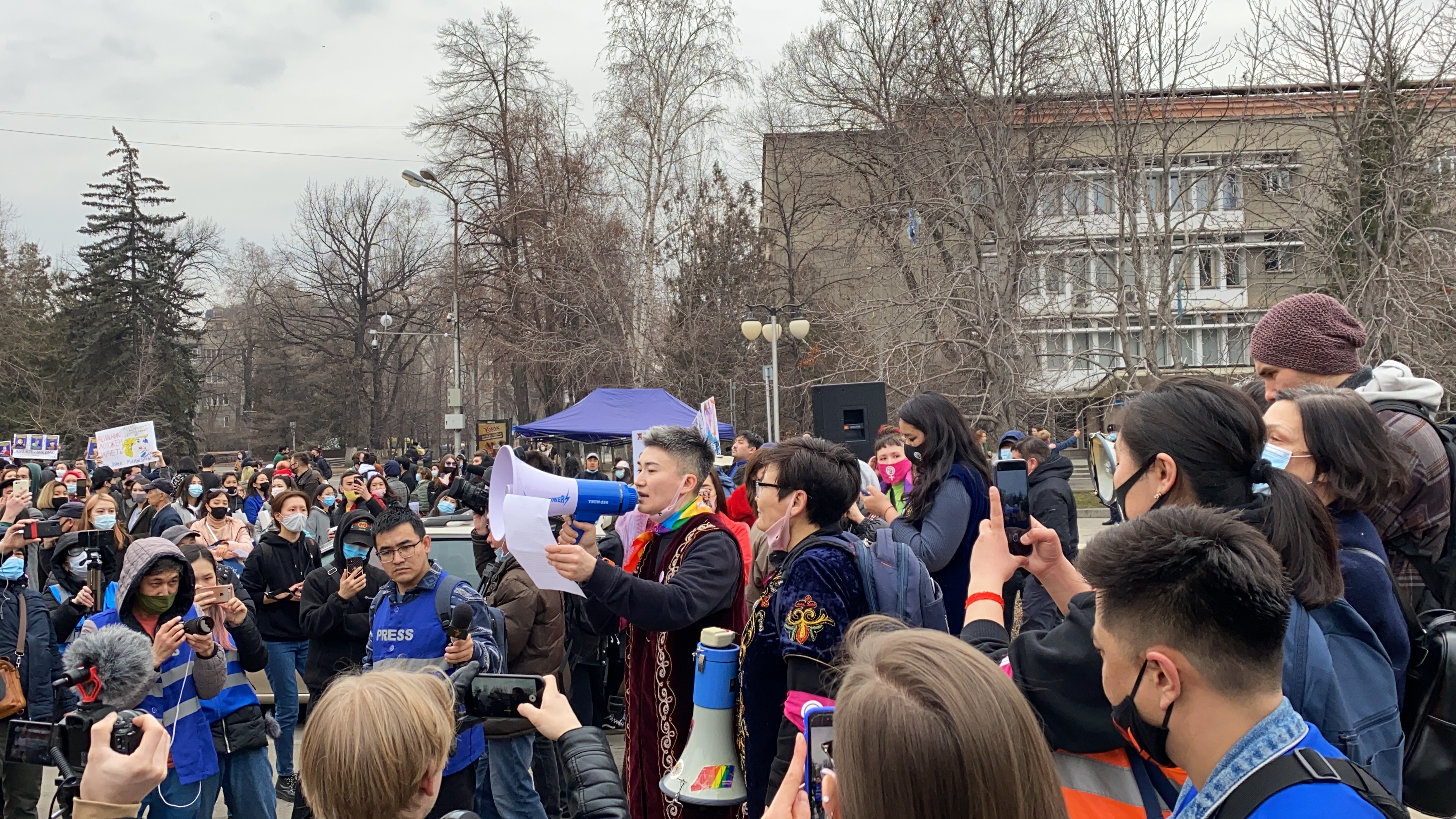 Organizers and others spoke to the crowd after the march. Photo by Paolo Sorbello.

“We want this to be a historic day in Kazakhstan, the first of many more marches on this day of struggle,” Irina Pukhnatova, better known as Arina Osinovskaya, who was fined last year for organizing a March 8 rally, told the crowd at the end of the march.

“That was our promise during the march last year, we delivered this year and we hope to keep the promise in the future,” Asiyeva concluded.

Feminist movements across the former Soviet space have struggled for recognition and continue to do so. Marches in Bishkek and Osh, Kyrgyzstan were closely observed, while a rally in Baku, Azerbaijan was broken up by the authorities. Across the region, a new wave of feminist activism has started its long journey toward equal rights.

Bilash headed a group advocating for greater attention to the ethnic Kazakhs detained in China’s camps in Xinjiang. It got him in trouble with the Kazakh government.

Kazakhstan Still on the Long Road to a Latin Alphabet

Kazakh has been written in a Cyrillic script since 1940, but government officials have long pushed for a gradual shift to a Latin alphabet.

The third edition of the FemAgora Central Asia festival began with online video conferences this year, as activists find new and original ways to create networks

Protest Körpe: Quilting Together ‘Real’ and Digital Dissent in Kazakhstan

Creative demonstrations for an imprisoned activist in Kazakhstan bridge digital and real-world engagement.