These photos document the construction of four dams – from north to south, Wunonglong, Lidi, Tuoba, and Huangdeng (see map below) – along a 200-kilometer stretch of the upper Mekong in Yunnan, China, and the transformation of the river from a free-flowing current to a series of stagnant reservoirs. These hydropower projects are part of a larger transnational movement to build hundreds of dams on the Mekong and its tributaries, including the Nam Tha in Laos.

In 2011, I trekked along the upper Mekong from Deqen south through Tibetan and Lisu villages. The river was braided copper and bronze, churning between talus banks. Dams existed on the Mekong further south in Yunnan, but here it ran unimpeded. Construction of infrastructure and access roads for the dams had begun, however, and clouds of yellow dust rose up where earth machines raked open the valley walls.

In 2014, I walked and hitchhiked north along the Mekong starting from Yingpan, to document the dams’ construction. The river had been diverted so scaffoldings and concrete walls could be built across the riverbed, but it still flowed uninterrupted. The construction zones were remote from official security concerns and I passed freely through the area. Villages along the river were being evacuated, with local people forcibly resettled to long blocks of concrete barracks antithetical to the organic organization and architecture of traditional villages.

In 2019, I returned to photograph the completed dams. I set out walking from Yingpan, but before I reached the Huangdeng dam I was picked up by police, who expelled me back to the county seat of Lanping. I circled far north to Weixi, and accessed the Mekong at Weideng. There I rented a motorcycle and spent three days riding north and south to the dam sites. The Huangdeng, Lidi, and Wunonglong dams were complete, with a combined reservoir capacity of 2 billion cubic meters. The Mekong was blocked and bloated, looking alternatively like a swollen dead worm or a broad lifeless lake.

Are the dams on the upper Mekong a far-sighted effort to secure a supply of water and electricity against future need? Or, considering the devastating downstream social and environmental effects of these dams, are they part of a strategy to develop a “hydraulic empire,” maintaining regional power through control over access to water, while also relocating and assimilating minority peoples?

Time will tell. For now, these photos offer a glimpse the upper Mekong before and during the construction of these dams, and of the series of static reservoirs it has become. 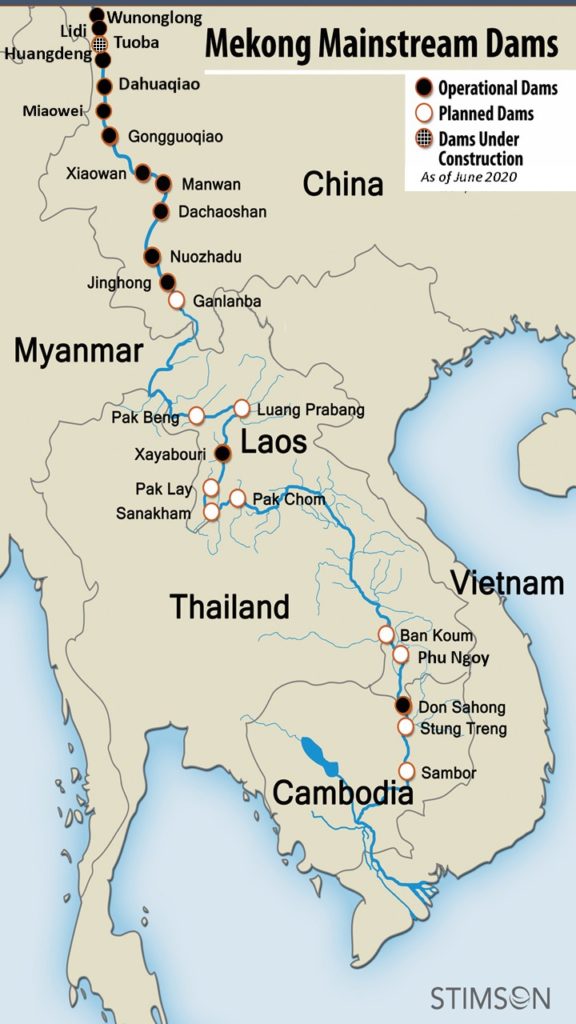 Dams along the mainstream of the Mekong River. Map by the Stimson Center, reprinted with permission.

China’s Control of the Mekong

Whether through its own dams or the financing and construction of dams in other countries, China is largely in the driver’s seat when it comes to the Mekong.

Analyzing Chinese dams in Laos provides insight into the local origins and drivers of the BRI, particularly along China’s borderland regions.

The fall in water levels has again raised questions about the activities of Chinese dam engineers upstream.