In early June, after months of regular incursions, there was a sudden lull in the presence of People’s Liberation Army (PLA) military aircraft in the southwestern part of Taiwan’s Air Defense Identification Zone (ADIZ). Then on June 15, 28 PLA aircraft suddenly went on a sortie into the southwest part of Taiwan’s ADIZ, the largest number in recent years. Some of them even entered the southeast airspace of Taiwan via the Bashi Channel. This non-routine activity, which comes close to an actual combat exercise, is worthy of attention from all the states around the First Island Chain.

Most of these aircraft were within the scope of the PLA’s coastal operational control. The most intriguing was the dispatch of two KJ-500 airborne early warning and control (​AEW&C) aircraft.

There had been some similar combinations of sorties in the past, but they were either a combination of low-velocity aircraft, or those fighters on accompanying flights without transiting through the Bashi Channel. Basically, previous incursions were operation controls and route trainings. This time, the aircraft numbers flying through the Bashi Channel into the southeastern airspace of Taiwan are similar to intensive “surrounding cruises around Taiwan” seen in 2016 and 2017. The inclusion of AEW&C aircraft can’t help but raise questions about the tactical purpose of the sortie.

Last June, Chinese Air Force News reported that instructors of the PLA’s J-16 had performed tactical training on target acquisition to enemy approach, similar to the “sensor-to-shooter” capability in the U.S. (the PLA calls it “A射B導”).

On June 15, the two KJ-500 AEW&C aircraft in the southwest part of the ADIZ were likely there to provide ensure maneuvers by Taiwan’s fighters, which would be scrambled to respond. The Taiwanese fighters could then be used to test target acquisition by J-16 fighters in the southeast airspace. Meanwhile, China’s H-6 bombers conducted comprehensive naval and air confrontations on their return in the southern theater. Either to understand or counter the possible electronic warfare acts from Taiwan, China sent along long-range electronic-warfare aircraft. 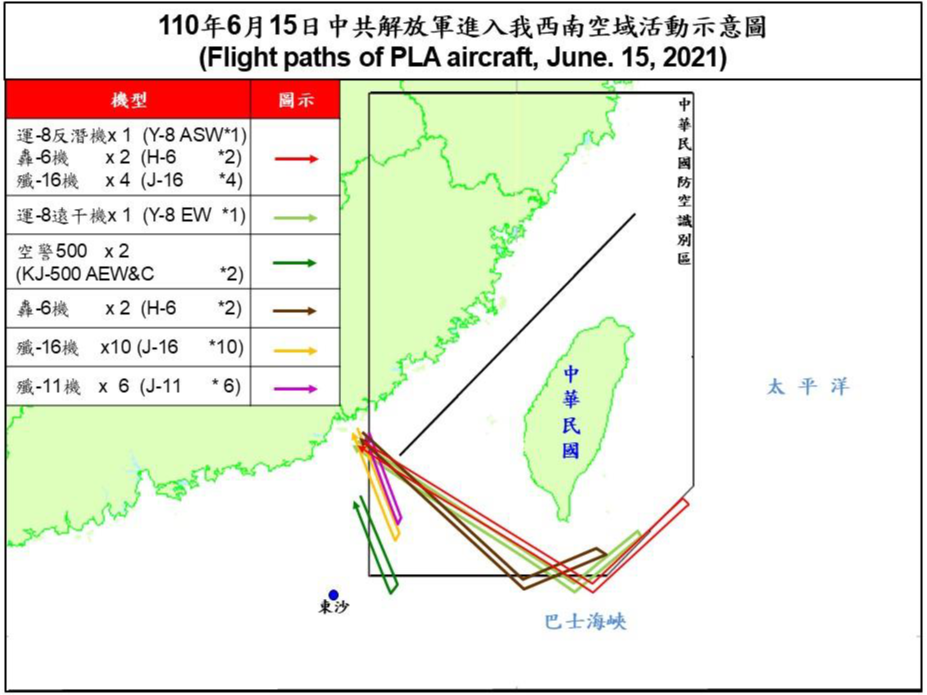 Image from the ROC Ministry of National Defense.

Two days later (June 17), the PLA dispatched four J-7 fighters into the southwest ADIZ of Taiwan. Although they didn’t stay long in that area, it was the first time that J-7s had entered the area since Taiwan’s Ministry of National Defense began its “Military News Update” last September.

The J-7 is derived from the Soviet MiG-21. From the 1970s, they were mass-produced and equipped with troops. In the early 2010s, the J-16 was under mass production and successively entered into service. Accordingly, production of the J-7 ceased in 2013 and they were gradually withdrawn from the frontline force.

Even so, the J-7 has not come to the end of its life cycle. In June 2011, when the PLA founded its first unmanned aerial vehicle (UAV) group in Gansu, 22 J-7 UAV fighters were included. In the China International Aviation & Aerospace Exhibition 2018 in Zhuhai, a display board on exhibit demonstrated the PLA’s ambitions to modify the Q-5, J-6, J-7, and J-8, all otherwise under retirement, into UAVs. 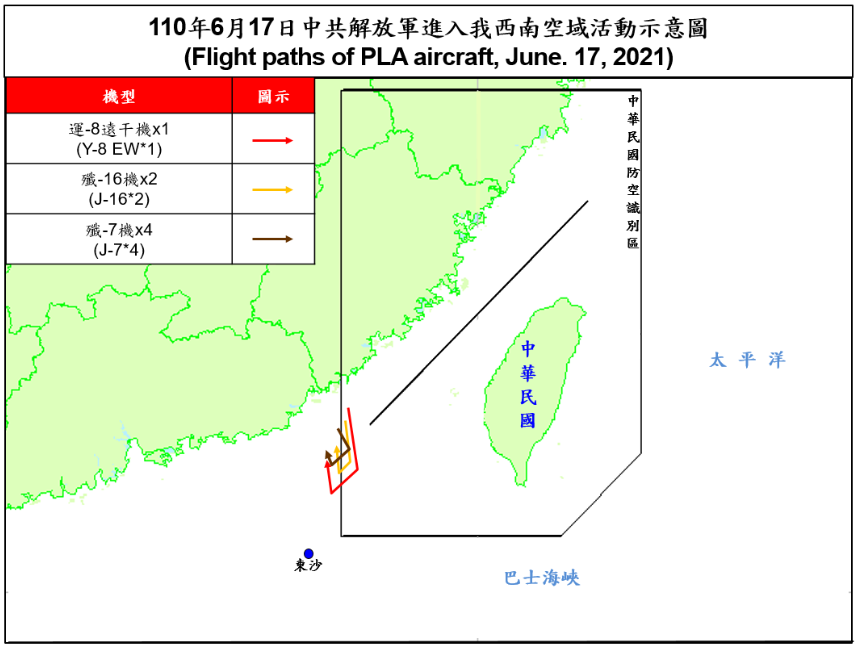 Image from the ROC Ministry of National Defense.

The PLA’s conduction of sensor-to-shooter tactical training in the eastern part of Taiwan means that it is taking Taiwan’s accompanying fighters as imaginary enemies to conduct actual combat training during its long-distance voyage. It is also using UAVs to understand the radar detection range of Taiwan and its electronic defense capabilities against drones, so as to further lay the groundwork for a war of attrition against Taiwan’s Air Force.

These incursions are not only aimed at collecting intelligence against Taiwan’s armed forces and wearing down their capabilities. China’s recent incursions also penetrate the Electromagnetic Operational Environment to imitate corresponding tactics. They seemingly are directed at Taiwan, but actually are challenging the “archipelagic defense” strategy under the United States’ Indo-Pacific strategy instead.

Therefore, it is necessary for the U.S. to enhance Taiwan’s electronic warfare and Electromagnetic Spectrum Operations capabilities through additional arms sales to ensure that Taiwan has sufficient military strength to prevent the expansion of aggression from China.

How UAVs Could Spark a Military Conflict in the Taiwan Strait

It makes tactical, operational, and strategic sense for China to start using UAVs in its incursions into Taiwan's ADIZ. Taiwan needs to decide now how it would respond.