After the announcement of the all-out war (dubbed D-Day) by the National Unity Government (NUG) on September 7, some Myanmar people resorted to panic buying. Phyo Wai has continued to patrol the area near the town of Homalin, as usual. He is a member of the People’s Defense Force (PDF), the armed opposition to the junta.

A lack of arms supplies had previously convinced him that “the final strike [against the junta] would happen in October at the earliest.” Now, however, Phyo Wai, who received military training from ethnic armed groups, sees the D-Day declaration as the “last call to mobilize.”

For those not involved directly in fighting, however, “D-Day was just a reminder to prepare and protect themselves,” according to Saw Seltha, a resident of Yangon.

Amid the D-Day talk, it must be acknowledged that all tactics that the NUG aims to deploy are already  in place. This time, however, they seek to strike in unison and with better weapons.

Fighting has resumed in Chin State, which had already experienced massive displacements and casualties. A coalition of about 400 combatants of the Chin National Army, and a newly organized Chin Defense Force, were killed 12 soldiers at a military outpost last week. Also, they were able to sabotage more than 65 telecommunication towers owned by a military company.

Despite knowing from bitter experience what kind of heavy response they should expect from the Tatmadaw, people in Chin State remain optimistic. “The military will lose soon,” they repeat, before seeking shelter in the hideouts built under their houses.

Since the announcement, the Myanmar army has become even more alert, flexing its muscles in the cities by deploying additional troops. Based on their actions since February, the coup only further convinced the generals that the only language that matters is power (or the abuse thereof).

Importantly, the Tatmadaw has been on a shopping spree in recent years, bulk-buying new equipment from abroad. This month, Myanmar’s army was reportedly in talks with Pakistan for the production of JF-17 Block III fighters, a lightweight, single-engine, fourth-generation multi-role combat aircraft. Weaponry of this sort can inflict serious damages on the enemy from a long distance.

But do the tools matter if the craftsman is not skilled in using them?

The 2020 fighting in Rakhine State left commentators surprised over the high number of casualties on the side of the Tatmadaw. After the coup of February 1, many looked back at the fight in Rakhine and began anticipating soldiers being easily defeated in the fight against the anti-coup resistance.

The hardliners flanking the coup-maker, Sen. Gen. Min Aung Hlaing, are said to hate ousted leader Aung San Suu Kyi and her National League for Democracy (NLD), but they are not the only people within the armed forces.

Against this backdrop, there are reports of the Tatmadaw facing challenges in recruiting new cadets this year, ostensibly due to ravaging pandemic rather than the unpopularity of the job. In many regions of the country, the army is reported to be forcibly recruiting young people as so-called assistants, or simply porters.

Meanwhile every defection of a soldier or policeman is celebrated triumphantly on Myanmar’s social media. Such reports are supposed to forecast the imminent defeat of the army.

In order to understand how the resistance movement can remain focused on the goal of overthrowing the junta for such an extended period of time, even while being terrorized, it is vital to acknowledge the importance of having a common narrative.

Many within the resistance movement stress that all the soldiers are badly educated, undisciplined, malnourished, underpaid – and therefore inferior to the motivated protesters, who plan to achieve a higher goal. 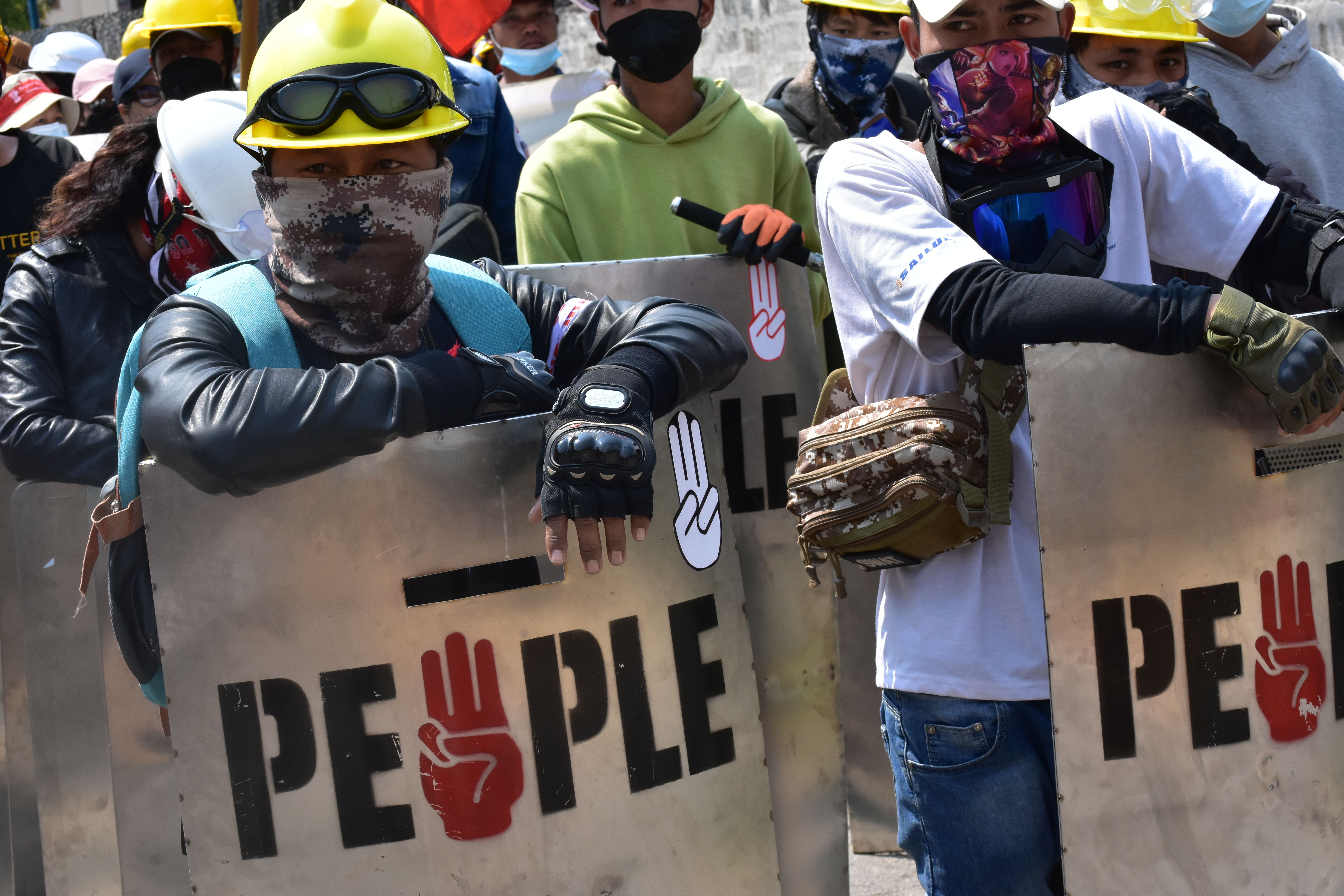 Before the coup, many Myanmar people used to have a very specific imagination of the Tatmadaw as an institution. That collective thinking continues to shape Myanmar’s internal power struggle – this time with amendments to better fit the changing narrative.

From 2016 to 2021, during the rule of the semi-civilian government under Aung San Suu Kyi, many people sympathized with low-ranking soldiers and policemen, believing they were recruited by force, or given away to the army by their poor families to make a living. “We hate the military leadership, but not the military itself,” was a common refrain heard in the ethnic Bamar-dominated central parts of the country. Even democracy icon Aung San Suu Kyi addressed the Tatmadaw as the army of her father, and refused to condemn them for their abuses in the ethnic areas.

But that perspective overlooks the truth that the current ruling class of the Tatmadaw stems from soldiers that started at the very bottom of the military career ladder. Min Aung Hlaing, the self-proclaimed prime minister as well as Myanmar’s commander-in-chief, started his education in 1974 without having family affiliations in the institution.

In the aftermath of the coup, however, these illusions of a distinction between leadership and rank-and-file have vanished. Low-ranking soldiers and police were observed working hand-in-hand in suppressing the protests. In addition, the number of defecting officers turned out to be rather low, belying the theory that there are secret NLD sympathizers within their ranks. Some explained the lack of defections through the constant monitoring and control of the army personnel and their families, who are often housed at military compounds.

Also, astonishing as it may sound, the strong cohesiveness of Myanmar’s army is mirrored in the content posted by young soldiers on TikTok. The platform features many officers creating content declaring how proud they are to be part of the military. Many of these videos depict troops showing off their guns and threatening the civilian population.

Meanwhile, it must be noted that since independence, Myanmar’s army has always been present in the life of the people, while not everyone has embraced the NLD. Indeed, some civilians are lending their loyalties to the Tatmadaw instead.

“If the soldier tells me something to do, I must do it,” said Yea He, a silent supporter of the army. He had frequented pro-democracy protests, but only to photograph them.

“Aung San Suu Kyi was always rude to the generals. If you hit a dog, you must expect it to bite you back,” he added.

Before 1988, Myanmar was a true hermit state, prompting comparisons with North Korea. But then its generals attempted a series of superficial reforms aimed at achieving political legitimacy. The regime, aware of the economic disaster unfolding after decades of Burmese-style socialism, planned to implement a private-enterprise-led market economy, and provided attractive incentives for foreign investors.

For the first 10 years after that tentative opening, a stream of private companies and foreign governments alike made investments and awaited some form of recognition of the military regime by the international community. Myanmar’s accession to full membership status in ASEAN in 1997 suggested that the generals were prepared to integrate the country’s markets with those of its neighbors – and that those same neighbors were willing to work with the Tatmadaw.

For supporters, the events of the past decades proved that the generals are trying their best to modernize the country, by building infrastructure and energy projects, often with the hands of hardworking soldiers (although a plethora of testimonies also indicate the use of the civilian population as slave labor).

With the country split, Myanmar’s political crisis has engulfed every layer of the country’s socioeconomic life in the country and mobilized broad masses toward armed struggle. In that context, seeking a ceasefire has become futile. Neither the NUG nor the Tatmadaw want to talk with each other, as each is certain of their pending victories – no matter the price.

“In the past, they [the military leaders] had used the so-called ceasefire strategy to destroy armed groups, which amounted to crimes against humanity,” Phyo Wai, the PDF soldier, said. “Importantly, you don’t make a break in the middle of the revolution.”

In a noteworthy move, China recently consulted the NUG, and also opposed the dissolution of the NLD. It might be prudent for the international community to revisit the possibility of imposing an arms embargo. For now, Myanmar’s resistance movement cannot escape the reality of the Tatmadaw having more resources and better-equipped troops at its disposal.

Meanwhile, it’s important to remember that, not long ago, the country – and the world – nurtured hopes of bringing in democracy with the aid of generals. After all, it was another group of generals who released Aung San Suu Kyi and set in motion the political and economic reforms of the 2010s.

Myanmar’s powerful military is an unshakeable reality at the moment. Rather than unseating the Tatmadaw altogether, the real question facing Myanmar’s resistance movement might be how to provoke a change in its current leaderrship.

Can Defections Take Down Myanmar’s Military?

The post-coup resistance movement has its sights set on toppling the Tatmadaw once and for all – including by weakening the military from within.

David and Goliath: Myanmar’s Armed Resistance at the Crossroads

“We can’t just wait to get help until we die”: More and more protesters see no hope for a return to democracy outside of taking up arms.