Subi Memet posted this poem on social media in January 2022. An American Uyghur, her father Mamat Abdullah was sentenced to life in prison by Chinese authorities. He is a 71-year-old former head of the Uyghur Region’s Department of Forestry.

Uyghur women, whether in East Turkestan or overseas, are living through daily torment. In staged propaganda, China shows the “happy faces” of dancing Uyghur women, trying to cover up the atrocities behind those smiles. China’s international media is heavily promoting its creation of a “new life” for Uyghurs. But in reality, Uyghur women are suffering forced sterilization, forced abortion, forced birth control, forced marriages, mental and physical torture, and sexual assault in detention.

Of the 1 to 3 million Uyghur and other Turkic people estimated to have been detained in concentration camps since 2016, human rights researchers have been able to speak with fewer than 50 survivors that have been able to make it out of China, and speak out about their horrific experiences. The stories of the women camp survivors are truly shocking.

“I felt like I have lost my womanhood,” said Zumrat Dawut. “I felt like they have taken out a part of my body that makes me who I really am.”

“Whether we already have children or not, sterilization is an assault. It feels like we’ve been deprived of part of our basic humanity, and our chance to be a carrier of our nation’s next generation,” said my cousin Maynura. She was sterilized forcibly when she had her third child at the age of 35. When she lost her son, she was devastated that she had been robbed of the chance to have another child.

There are countless stories of women like Maynura and Zumrat Dawut.

On December 9, 2021, independent experts comprising the Uyghur Tribunal found China in violation of the Genocide Convention due in large part to forced sterilization and birth control measures: the genocide determination partly hinges on Chinese state violence against women. However, the abuses targeting Uyghur women are met with silence by international human rights authorities. The United Nations has a Special Rapporteur on violence against women, its causes and consequences, and yet we have heard nothing on this abominable violation of rights from Reem Alsalem’s office. On the U.N.’s designated International Women’s Day, I call on the Special Rapporteur to exercise the duties of her mandate to protect Uyghur women from state violence.

Uyghur women overseas are also suffering terrible anguish and torment under the Uyghur genocide. As Subi wrote: “My days are dark, my nights don’t have stars, my smiles are fake, my tears are red, my house is a mess, my kids’ laughter doesn’t soothe me. Am I a bad mom? Who did this to me? Who did this to my family?”

Nyrola, a Uyghur scholar and author based in the Netherlands, is campaigning for her cousin Mahira Yakup. Nyrola wrote on her social media on February 4, 2022: “Am I ever gonna see my cousin, hug my parents again? (我是不是这辈子都救不了我家人了)”

Am I ever gonna see my cousin, hug my parents again?

For Nyrola, and other Uyghur women, unknown conditions and uncertain futures for our loved ones in East Turkestan have only increased the heavy burden on us in the diaspora. Uyghur women abroad know that we cannot give up despite our overwhelming feelings of hopelessness and depression. Uyghur women are in the forefront of the advocacy work on the international stage, and also take on great responsibilities in activities to nurture strong community feelings in the diaspora, revive our culture, and pass on our beautiful homeland’s language to the next generation.

The majority of local Uyghur language schools, and language curriculum materials are managed and led by Uyghur women educators, writers, and literature experts, such as the vibrant Ana Care school in northern Virginia. Munawwar Abdulla, a scientist and dedicated rights advocate, and my beloved daughter, co-founded the Tarim Network to provide a forum connecting Uyghur youth worldwide. Well-known writer Muyesser Hendan wrote the first book about the atrocities. The BBC named her to its list of “100 most inspiring and influential women in the world” in 2020.

Women camp survivors have given testimony before Congress, parliaments, and the Uyghur Tribunal. BBC World made global headlines in February 2022 by publishing the courageous testimony of brave camp survivors — including Tursunay Ziyawudun, Kalbinur Sidick, and Sayragul Sautbay — who overcame many taboos to disclose brutal sexual abuse in the camps. Kalbinur Sidick, who was forced to be a “teacher” in the camps, has testified that even outside the camp, she faced bullying, abuse, insults, and sexual assault in her own home, by the Chinese men who were part of the government’s “becoming relatives” homestay program.

Survivor Mihrigul Tursun’s story has been told in a widely circulated manga, published in 17 languages, and her book, “Place Without Return”), was published in Germany in February. 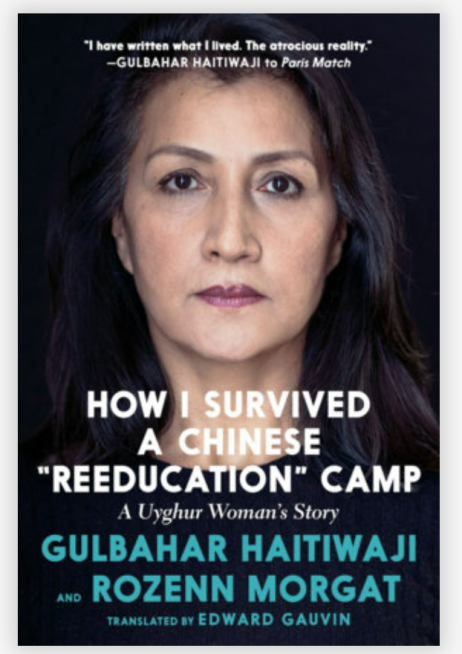 Gulbahar Hatiwaji’s book, “How I Survived a Chinese ‘Reeducation’ Camp” is now available in French and English. Jewher Ilham’s book about her campaign for her father, renowned Uyghur scholar Ilham Tohti currently serving a life sentence, is titled, “Because I Have To.”

The Chinese state has gone to extraordinary lengths to cover up the suffering of Uyghur women. According to camp survivor Tursunay Ziyawudun, there were special days when Chinese leaders came to visit and observe, sometimes with foreigners. On these days, the camp situation would suddenly change. The detainees were ordered to put on makeup, to smile, and to look happy. Sometimes they would have to sing and dance, and whoever was unable to act as ordered would be punished after the “event” ended.

If the Chinese government really wishes to showcase Uyghur women’s happy lives in our homeland, it should open the door to the world. Currently, I cannot even talk with my relatives by phone without the Chinese police listening in, and taking the risk that they will be taken away to the camps.

Let me visit my homeland and see my relatives. Let me see with my own eyes if my relatives are “living a happy life.” Let observers, reporters, and foreigners visit East Turkestan without the Chinese state controlling and censoring our visits. If China’s leaders are as strong, rich, and confident as they proclaim, why not let us see for ourselves what is happening, instead of promoting a barrage of state propaganda?

On this International Women’s Day, which should be a day for women to celebrate being happy, free, and strong, Uyghur women are marking over seven decades of deprivation of their rights by the Chinese government. There is nothing to celebrate for Uyghur women. It is long past time for international women’ rights organizations to join us in a global campaign, and for official United Nations agencies to break their complete silence on the state assault on Uyghur and Kazakh women.

By Wu’er Kaixi and Rahima Mahmut

Instead, while the world slept, Chinese authoritarianism metastasized.

All of us who have our liberty must do better in ending the nightmares of people under assault, wherever they are.

Understanding how ordinary Chinese people view the relationship is a crucial, but often overlooked, element in getting U.S. policy right.

US Policy on Tibet Has Lost its Way. We Want to Change That.

For years, Chinese officials have attempted to rewrite history. Now 2 Congressmen say the U.S. should push back on the CCP’s distortion of history rather than abetting it.

What India’s UPR Means for the Quad

Lawmakers in Tokyo, Canberra, Washington, and even Seoul should not shy away from pushing New Delhi to uphold its commitment to human rights.