Xujiahui, Shanghai, April 14 — It’s now two weeks since Shanghai was locked down. I could hardly have imagined that this city would ever become as it is today. On the first day, a Friday morning, downtown looked like this: nearly completely empty of either cars or foot traffic, with only a couple of cyclists moving on the streets. (I would love to find the person who’s playing the erhu in the distance and say thanks – he’s been doing so daily since the first day.)

Our building’s lockdown started a few days earlier, on March 29, because they discovered a case here, down on the second floor. We’re now up to at least three cases in the building, about 10 in our compound of about 2,500 people, so we’re officially a hotspot.

These lockdowns typically happen suddenly, which isn’t surprising, but the implementation can be, well, interesting. 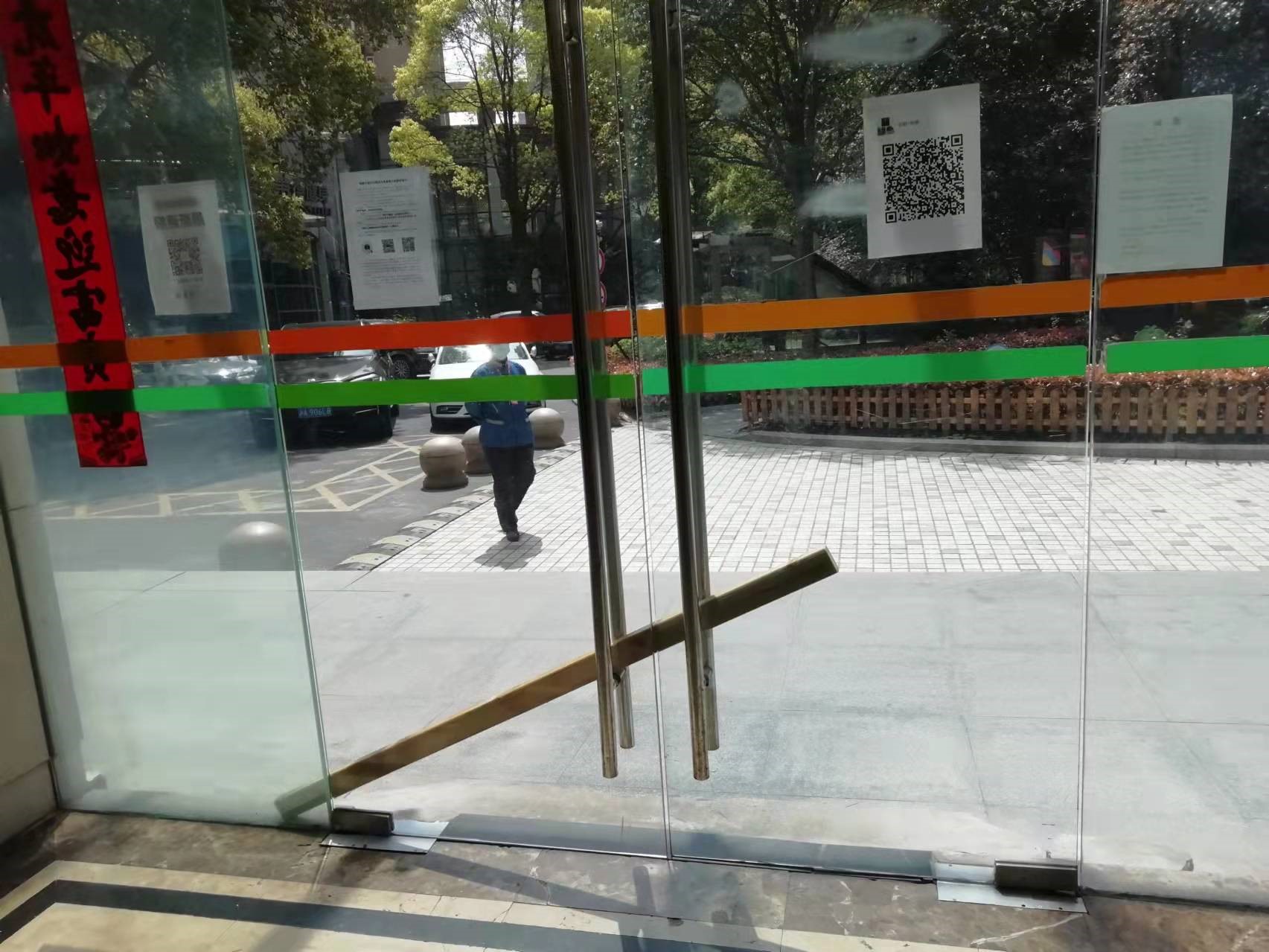 The temporary method used to enforce the lockdown at the beginning. Photo by J. Van Fleet.

While our building staff chose this decidedly low-tech method to enforce the lockdown on the first morning, since that time they’ve removed the plank. Now in the daytime, one or more of the dabai, the “big whites,” the name we use for all the people everywhere wearing hazmat suits, stand sentinel at the entrance. At night there’s often no one there at all, and the doors are wide open to improve ventilation.

Every day brings a new surprise, a new challenge. I never would have guessed that being locked down would keep people so busy. We spend a non-trivial amount of time preparing for nucleic acid tests – getting dressed in “outside” garments (which stay in the entryway so viral hitchhikers don’t come in), double masking, then going down floor by floor, to avoid crowding the elevators, all coordinated by a continuing barrage of WeChat messages. And then there’s at-home antigen testing and uploading results, or checking which units have positive results, or just trying to keep up with the tsunami of other WeChat messages.

But food is foremost on everyone’s minds, and the thing we spend most of our time on. WeChat groups overflow with discussions of where to get food items, how to get them, how long delivery will take, whether or not the delivery will arrive, prices, etc. In the first few days of April, with restaurants and stores closed, the usual grocery delivery services were drowning in orders, and the government-organized food distribution was spotty.

The problem has been more on the delivery side than the supply side – getting food from distribution point to residences now requires running a gauntlet of repeated disinfections, the district passes that are now required for delivery services to enter specific areas, and the disinfecting procedures at destination (again, but also necessary). And all that must be done with precious few couriers, as many have tested positive.

In addition to these challenges, food from outside Shanghai has a harder time getting in, because of checkpoints on the roads. Yet another complicating factor is a shortage of disinfectant and PPEs (demand has, as you will reasonably infer, exploded). Add to that the sudden need for an army of volunteers at the building and compound level, and the problems of lockdown are clear.

The entirely predictable food shopping frenzy of the final two days of March, after the government announced that the lockdown would start on April 1, is now widely thought to have become a super-spreader event. The question of how to launch a lockdown must have created an impossible decision for the municipal officials – either way, there’s a major problem to address. Without advance warning, people’s food constraints would now be much more serious. Even with a few days to prepare, it seems that that large – very large – numbers of city residents are suffering from a lack of food.

In the face of such difficulties, people entertain themselves – they post comparison pics of their government food distributions, which differ by district. Some Pudong people found it humorous that they had received distributions with, of all things, SPAM. 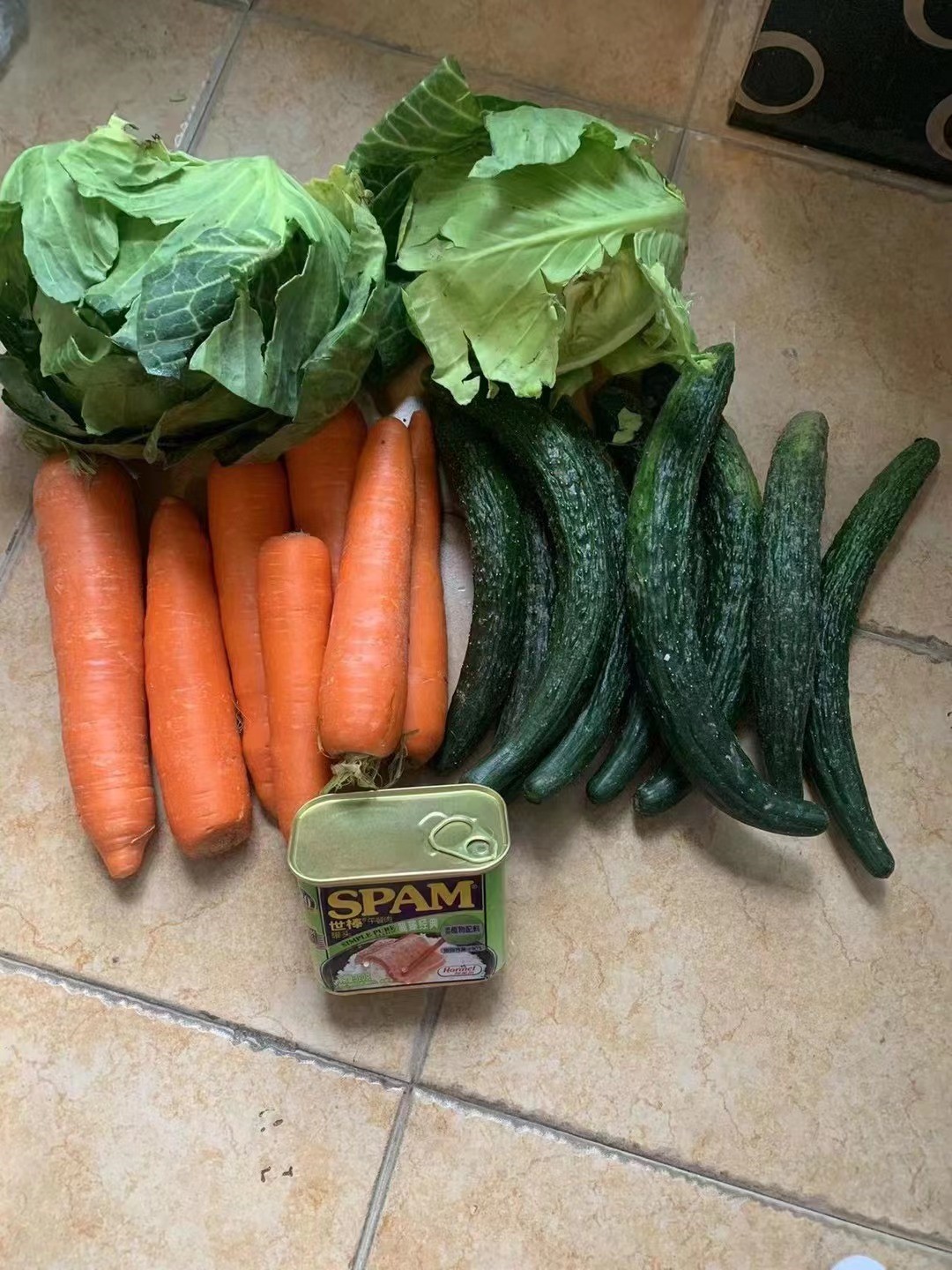 An array of food supplied to some Pudong residents by the municipal government. Photo by Xu YS.

Group buying has helped to overcome the delivery problem – fewer orders, delivered in bulk to a residential compound like ours, reduces system burden. In the past several days we have received vegetables, fruit, and milk through group buying.

But our neighborhood committee, volunteers along with the management company reps, last night announced that we must suspend group buying for three days, because they now consider such deliveries a virus vector. Demand for such services has flooded over supply like rushing water inundating the remains of a dam after a failure, and that has, inevitably, led to lapses in virus prevention measures.

Moreover the district and city-wide government bodies are now stepping in to try to further control supply chains, and are mandating prices to prevent gouging. We’re revisiting a “planning vs market” debate of the type Hayek wrote about 80 years ago, but one need not be an Austrian School acolyte to fear the outcomes of this experiment: a regulatory attempt to micromanage something as complicated as food supply for a city of nearly 30 million.

We’ve all heard that Omicron isn’t a serious infection, at least for the vaccinated – many elderly aren’t vaccinated, and preventing fatalities among that population, along with the consequent devastation of the healthcare system, is the asserted rationale for the current aggressive policy. Most people’s biggest concern here isn’t getting the disease itself, but rather getting sent to centralized quarantine, a scary prospect. I see a (to me) surprising amount of horror-story posts about these centers, as well as posts critical of government handling of other aspects of the situation, that remain in the social media platforms. But other posts are quickly scrubbed. Some video statements by the increasingly famous Dr. Zhang Wenhong, who has suggested that the current approach may kill more people than COVID-19 would, are now hard to find.

Regardless, the current policy of putting everyone who tests positive, regardless of symptoms, in centralized quarantine looks porous based on anecdotes, and hard to sustain logistically. Of the 10 cases in our building, more than half are still here – at least some for quite plausible reasons, like elderly people needing a family members’ care. Centralized quarantine facilities have already become overwhelmed – not just the number of beds but the infrastructure required to support scores of thousands of residents (not “patients,” as they’re not sick – the vast majority of Shanghai’s cases are asymptomatic).

The government is about to open a 50,000 bed facility at the National Exhibition and Convention Center, on the western edge of the city – it’s the size of more than 80 soccer fields – and they’ve famously brought in thousands of healthcare workers from surrounding provinces. But the city is logging more than 20,000 cases per day now, and either tomorrow or the next day we’ll exceed 200,000 since March 1. That new facility will hold only a few days’ worth of new cases.

For about two weeks now, Shanghai’s situation has been under direct control of the national government. And it seems to me that we’re hearing more campaign-style communication from official sources. I told one friend my concern that Shanghai’s pandemic management had taken on an increasingly political flavor. She said, “Yes, that could be a problem – as the situation becomes more political, it takes on an unfortunate feature, one that has plagued countries like the U.S. for two years now!”

Back in spring 2020, we saw densely populated urban areas – high-rises in Wuhan, multi-story lane housing in Milan – arranging group sing-alongs and similar. I think I recall hearing one Italian neighborhood singing “Nessun Dorma,” of course. Well, it’s Shanghai’s turn. A few nights ago, the compound across the street held a community concert/sing-along and general cheering-up event. Someone with good tech chops created a WeChat mini program to broadcast the event live, with scrolling dialogue at the bottom from people not just in the compound, and not just in Shanghai either – anyone in the world with WeChat could have logged on. The song selection reflected the global nature of Shanghai – popular local songs, vintage and modern, interspersed with “We Are the Champions” and, again of course, “YMCA.”

Our entire building expects to be in strict lockdown for another 10 days minimum, which will be two weeks from the last detected case. We’re fortunate in a number of ways – we have sufficient food and a great spirit of cooperation going between our residents, the many volunteers, and the neighborhood committee. But I recognize that we’re on the best end of this spectrum, and that the other end is frightening.

About a quarter of Shanghai’s population can now go outdoors, but authorities warned that the outbreak was still not under control.

China’s largest city is undergoing a five-day lockdown amid a growing outbreak.