The Japanese Ministry of Defense announced on June 30 that it has awarded a contract to shipbuilding company Japan Marine United (JMU) Corporation to build a next-generation offshore patrol vessel (OPV) for the Japan Maritime Self-Defense Force (JMSDF).

The ministry said JMU’s ship design and proposal were selected over those submitted by Mitsubishi Heavy Industries (MHI). MHI, however, was chosen to be the subcontractor.

Under the contract, JMU is charged with delivering 12 vessels to the JMSDF from fiscal year 2023, which starts on April 1, 2023.

The ministry said the value of the contract is about 9 billion yen ($66.6 million) per ship.

The new ships will measure about 95 meters long and 12 meters wide, and have a standard displacement of 1,920 tons and a maximum speed of 20 knots (23 mph). Each OPV features a combined diesel-electric and diesel (CODLAD) propulsion configuration, in which an electric motor and a diesel engine act on a single propeller. Each vessel will likely be armed with at least one 30 mm gun, based on an image of the OPV released by the Ministry of Defense. 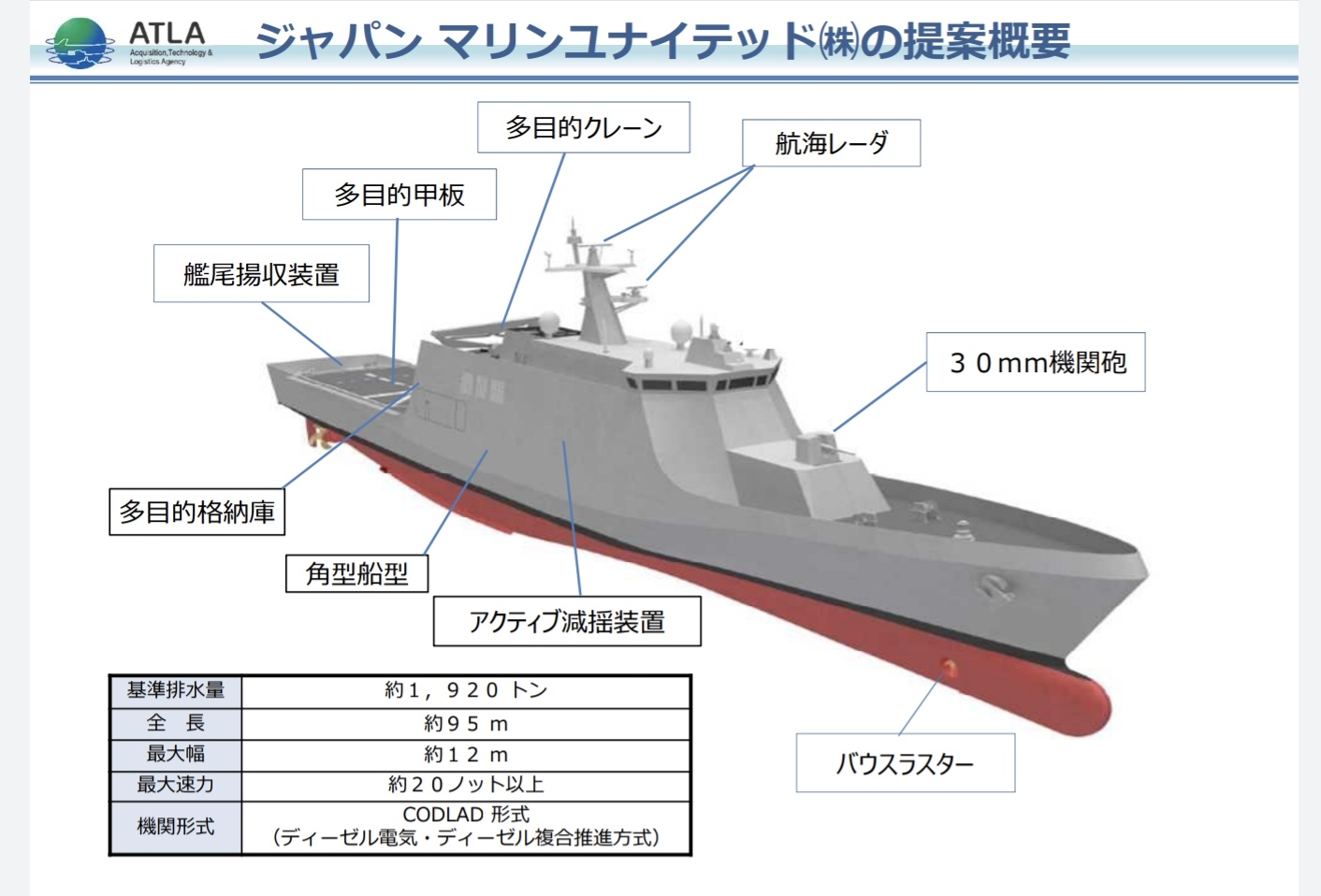 A concept image of a next-generation offshore patrol vessel (OPV) for the Japan Maritime Self-Defense Force (JMSDF) made by JMU. Image courtesy of Japan’s Acquisition, Technology, and Logistics Agency.

In a video released in July 2021, the ministry’s Acquisition, Technology, and Logistics Agency (ATLA) said that the new OPVs will be based on a modular system enabling customization and will be more capable than the current in-service OPVs through a combination of automation, adaptability, modularity, and sustainability.

For instance, the agency said that the OPVs will require fewer personnel and feature autonomous navigation systems, as well as advanced equipment for intelligence, surveillance, and reconnaissance (ISR) operations. They will be armed with both small- and medium-caliber guns and have a multipurpose hangar and deck space for modular payloads and ISO containerization for mission modules. The OPVs, which will feature a low radar cross-section design, are also being designed to be easy to maintain and have a low fuel consumption, ATLA added.

They also feature a deck from which helicopters or unmanned aerial vehicles can operate.

“The MSDF will maintain patrol ship units to enable enhanced steady-state ISR in the waters around Japan,” the guidelines said.

The Ministry of Defense has said those patrol vessels will specialize in warning and surveillance and can be operated with minimal personnel. In response to a manpower shortage at the JMSDF, Japanese media have reported that the new OPVs will only need a crew of about 30, far fewer personnel than the Mogami-class frigates, which have a crew of 90.

As neighboring China expands the size and capabilities of its naval forces, Tokyo is enhancing its maritime security, in particular to defend the southwestern Nansei Islands, including the disputed Senkaku/Diaoyu Islands in the East China Sea, by boosting its patrol activities. The Senkaku/Diaoyu islands are controlled by Japan but are also claimed by China.

The JMSDF has relied on civilian ships to transport fuel from oil refineries to bases. Now it has its own oil tanker, the first of two.

The Kumano is the first of a planned 22 vessels of the class, which will include capabilities never seen before on a Japanese frigate.

Exercises near Taiwan were scheduled to end on August 7, but China’s military has announced new drills for the next week.

China’s days of encouraging economic growth at any cost are over.