While Washington has attempted to slow down China’s advancement in artificial intelligence (AI) with new export controls, Beijing is determined to catch up with a comprehensive set of policy measures. It aims to achieve “great self-reliance and strength in science and technology.”

This article will analyze the implications of the 20th Party Congress report on China’s technological development, focusing on AI.

Beijing Is Doubling Down on Tech Development Efforts

Among the 15 sections of the 20th Party Congress report, five of them incorporate technology, including sections on the CCP’s new missions (section III), economic development (section IV), science and technology and education strategy (section V), domestic security (section XI), and military and defense (section XII). While only one paragraph from the 19th Party Congress report talked about the innovation-driven development strategy, Xi added a whole section to elaborate on “invigorating China through science and education and developing a strong workforce for the modernization drive.”

Compared to Xi’s Party Congress report in 2017, two key words in the tech context stand out in this year’s report: technology (科技 or 技术) and talents (人才). Tellingly, the report includes 55 mentions of the word “technology” and 34 mentions of “talents” in the technology context, dramatically increasing from 25 and five mentions of each word in the 19th Party Congress report, respectively. Other tech-related words such as innovation (创新), information (信息), internet (网络), digital (数字), smart/intelligent (智能), and originality (原创) have all appeared more frequently in the 20th Party Congress report than in the previous one. Taken as a whole, it is clear that investments in technology and talent will drive China’s development strategy in the next decade. 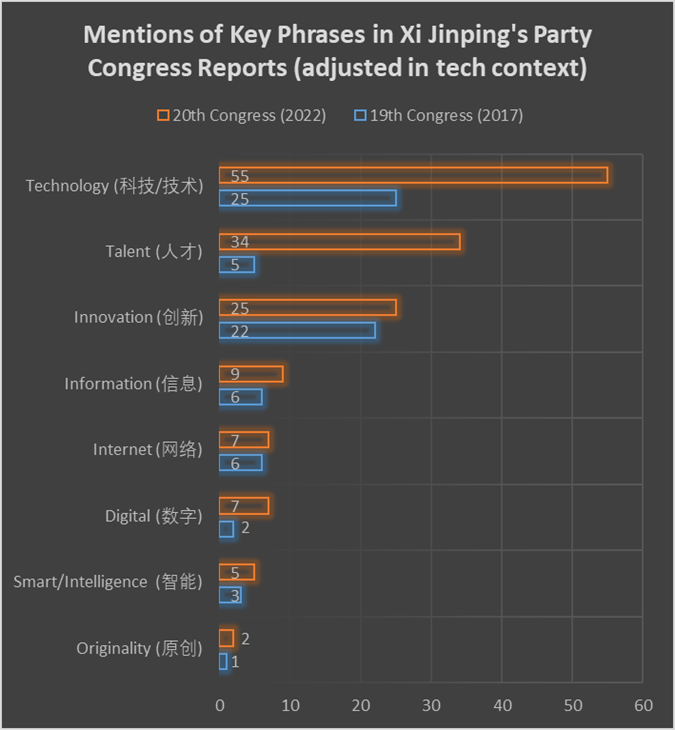 As Xi senses that “external attempts to suppress and contain China may escalate at any time,” the 20th Party Congress report is consistent with his efforts to strengthen China’s self-reliance. More specifically, Xi highlights breakthroughs in core technologies through original research empowered by a competitive pool of talents.

On the direction of development, Xi abandons “a market-oriented system for technological innovations,” which he proposed in 2017. Instead, he orders the science community to fulfill “national strategic demands.” This phrase is not entirely new; it appeared as early as 2016 in the National Science and Technology Innovation Plan during the 13th Five-Year Plan Period. However, removing the “market-oriented” phrase from the report and specifying “national strategic demands” as the new direction for technological development implies potentially more consolidated government efforts to guide – if not enforce – Chinese researchers to work on projects that Beijing deems as priorities. Based on previous documents, such projects in the AI realm usually include the underlying technologies for core electronic devices, high-end generic chips, and basic software (collectively referred to as核高基 in Chinese), which are chronic “bottleneck” issues for China.

To achieve technological self-reliance, Xi believes that talents constitute the “primary resource.” Besides nurturing brilliant minds at home through better education, China will also increase its efforts to attract talent from overseas. Already, China has developed a range of programs, such as the flagship “Thousand Talents Program” launched in 2008 to import STEM researchers and engineers. As Beijing seeks “comparative strengths in global competition for talent,” more aggressive measures may follow given Xi’s words that “no effort should be spared and no rigid boundaries drawn in the endeavor to bring together the best and the brightest from all fields for the cause of the Party and the people.”

The CCP also recognizes the importance of international cooperation to advance research and development (R&D), as Xi proposes to “expand science and technology exchanges and cooperation with other countries.” In fact, despite geopolitical unease, China and the United States have generated the largest amount of cross-national collaborations in AI publications from 2010 to 2021,  nearly three times more than between the United States and the United Kingdom, the second most productive pair. While Beijing is eager to engage with foreign researchers and institutions, the scale of collaboration may hinge on Washington’s evaluation of associated costs and benefits, given its concerns about technology transfers.

Civil-military fusion has been China’s overarching guideline in its AI development, given the dual-use nature of this emerging technology. In the 20th Party Congress report, Xi articulates his thoughts on incorporating AI into the Chinese military.

While the 19th report pledged to make progress in mechanization and informatization of its force by 2020, the strategic goal now is “integrated development of the military through mechanization, informatization, and the application of smart technologies” (机械化信息化智能化融合发展, or collectively “三化”). Xi put forth this idea in July 2020 at a Politburo meeting on military modernization, and the Fifth Plenum of the 19th Party Congress provided further elaborations. Notably, the CCP argues that following the Western development path in military upgrade from mechanization to informatization to adding artificial intelligence consecutively is incompatible with the Chinese military. Instead, China should take advantage of artificial intelligence to facilitate the mechanization and informatization of its military capabilities.

Accordingly, Xi suggests that the People’s Liberation Army (PLA) should “study and gain a good grasp of the characteristics of informatized and intelligent warfare and the laws that govern it.” As AI’s applications in defense are primarily at a nascent stage, being the first to understand its potential will not only enable more efficient deployment but also help mitigate the associated risks.

In terms of specific applications of AI, the 20th Party Congress report underscores the advancement of “unmanned, intelligent combat capabilities.” This conforms to PLA’s long-term investments in unmanned vehicles at major universities and research institutes since the early 2010s. Compared to the relatively vague language of “accelerating military intelligentization” in the 19th report, the explicit reference to unmanned vehicles equipped with AI may indicate Beijing’s interest in deploying this particular technology in the battlefield.

The 20th Party Congress report is essential for understanding the CCP’s policy focus in the next five to 10 years. A close look at the report in comparison with the previous version reflects Xi’s belief in the critical role of technology in driving China’s development and achieving “the great rejuvenation of the Chinese nation.”

As a promising emerging technology, AI has received significant attention from the CCP. This report continues that trend and vows more efforts to achieve breakthroughs in core technologies with high-quality talents through coordinated state support in the face of U.S.-led containment. In addition, this report also implies the PLA’s integration of AI into its military capabilities in a more practical way.

Chen Gang will likely enter the Politburo in 2027. His experience governing technoindustrial clusters will be a valuable skill set for top governance positions through the 2020s.

Exports of Chinese AI technology give Beijing a foothold in foreign security systems.