Reports began emerging in the Vietnamese media on Thursday that China’s Haiyang Shiyou 981 (HD-981) oil rig—the centerpiece of last summer’s clashes between Vietnam and China—was being redeployed off the coast of China’s Hainan Island, in waters where the disputed exclusive economic zones (EEZs) of Vietnam and China overlap and west of the disputed Paracel Islands (known as the Xisha Islands in China). Vietnamese reports, citing a China Maritime Safety Administration (MSA) announcement, noted that the rig was deployed to the coordinates of 17°03’75’’ North and 109°59’05’’ East, approximately 120 nm from Vietnam’s coast, 63 nm from China’s Hainan Island coast, and 87 nm from the nearest Island in the Paracels (mapped below). 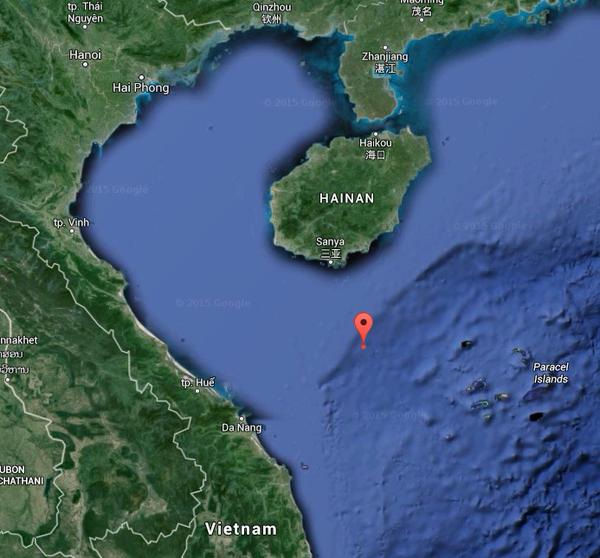 According to China’s MSA, the rig will explore for oil and gas from June 25 to August 20. The MSA’s announcement, pictured below, warns nearby vessels that sailing “within 2000 metres of [HD-981]” is “prohibited.” According to one Vietnamese maritime law enforcement source who spoke to Tuoi Tre, Vietnamese authorities are closely watching HD-981’s movement. M. Taylor Fravel, a U.S.-based China scholar, noted that “EEZ overlap at that location is about 100 percent; both have active [oil] blocks on their side.” The coordinates given by China’s MSA suggest that HD-981 is closest to Vietnamese oil block 115, but the oil rig remains closer to China than Vietnam. Greg Poling, an analyst working on the South China Sea at the Center for Strategic and International Studies, notes that the coordinates provided by China’s MSA suggest that the rig is not yet within disputed waters (see map below). 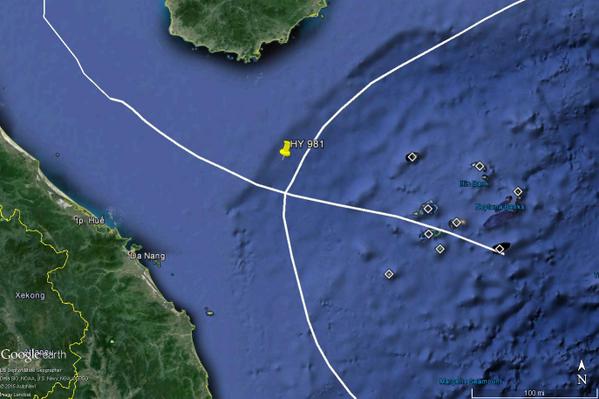 China’s move represents a re-ignition of Sino-Vietnamese tensions less than a year after China withdrew HD-981 after a series of clashes with Vietnam. As I wrote last month, in a reflection on the clashes a year after they began, China’s HD-981 deployment set off widespread anti-China protests in Vietnam, leading to attacks on Chinese citizens and business in the country. Additionally, China’s deployment of a mix of civilian, coast guard, and People’s Liberation Army Navy (PLAN) vessels with HD-981 inflamed tensions further.

Though it’s often unwise to read too far into the tea leaves on the timing of China’s moves in the South China Sea, this particular incident merits a closer look. Barely two weeks have passed since China began a “charm offensive” of sorts prior to the U.S.-China Strategic and Economic Dialogue. East of the Paracels, in the Spratly Islands, China announced that most of its land reclamation work had been completed and would stop (though construction would continue). My colleagues and I here at The Diplomat took that to mean that we would see a period of relative calm, probably due to the presentation of oral arguments at the Permanent Court of Arbitration in The Hague on the Philippines’ case against China but certainly given Chinese President Xi Jinping’s scheduled September visit to the United States.

The timing is also telling in the wake of last year’s episode involving HD-981. As some readers may recall, China actually withdrew HD-981 earlier than anticipated last year, moving to deescalate the crisis shortly after Chinese State Councilor Yang Jiechi visited Hanoi. As my colleague Shannon wrote then, the early removal of HD-981 certainly didn’t indicate that China was acquiescing to Vietnam’s demands or that it was relinquishing its right to operate in the disputed waters. One theory was that China may have been taking advantage of the impending typhoon season in the South China Sea to deescalate the crisis. The dates presented for HD-981’s exploration this time around seem to align with that reading. Depending on how events proceed between China and Vietnam in the coming weeks, Beijing may see this one out all the way through August 20.

Between China’s continuing construction activities in the Spratlys, the impending oral arguments in The Hague, increasing U.S. freedom of navigation operations, Japan’s increasing involvement, and now renewed tensions off the Paracels, the summer of 2015 could be the hottest one yet in the South China Sea. We’ll be keeping a close eye on the next developments here at The Diplomat.

New additions to ‘Sansha’ City and a naming exercise for submerged features are the latest in Beijing’s sovereignty-seeking toolkit.

What is the long-term significance of China's decision to move an oil rig into Vietnam's exclusive economic zone in May 2014?

The U.S. State Department said it was “seriously concerned” by the incident.

The accounts are part of the politician's well-oiled machinery of social media manipulation.

ARSA After the Myanmar Coup: Between a Rock and a Hard Place

Isolated from its main popular base of support, the ragtag militant outfit has withered on the vine.

By Aijaz Hussain and Sheikh Saaliq

The silencing of the press in Indian-controlled Kashmir intensified last week, with the closure of the Kashmir Valley's only independent press club.

The revered Vietnamese monk did much to popularize the tenets of Zen Buddhism in the West.