The United States will help Vietnam bolster its maritime security by providing $18 million to Hanoi for the acquisition of coast guard patrol vessels. The initiative marks the first major development on defense cooperation between the two erstwhile enemies since the partial lifting of the decades-old U.S. arms embargo against Vietnam late last year (the embargo still excludes lethal arms). Carter’s visit comes just weeks after the 40th anniversary of the fall of Saigon, the event that marked the end of the Vietnam War.

U.S. Defense Secretary Ashton Carter remarked that he hoped the U.S. financing offer would lead to a growing security partnership between the two countries:  “After 20 years there is more we can do… [to] enhance our capabilities and the capabilities of Vietnam,” he noted.

In Vietnam, Carter became the first U.S. defense secretary to be given a tour of a Vietnamese military vessel; he boarded Vietnamese Coast Guard ship CSB-8003 in the Vietnamese port of Hai Phong. The visit exemplified the growing ease with which U.S. and Vietnamese leaders are willing to broach the issue of bilateral defense cooperation. For the United States, Vietnam is increasingly being seen as a critical partner as it seeks to moderate China’s assertion in the South China Sea. Vietnam is currently undergoing a wave of military modernization—with a focus on its navy—in the interest of safeguarding its waters from outside interference. Last year’s episode involving a Chinese state-owned enterprise’s oil rig in disputed waters highlighted the urgency of maritime security for the Vietnamese leadership. 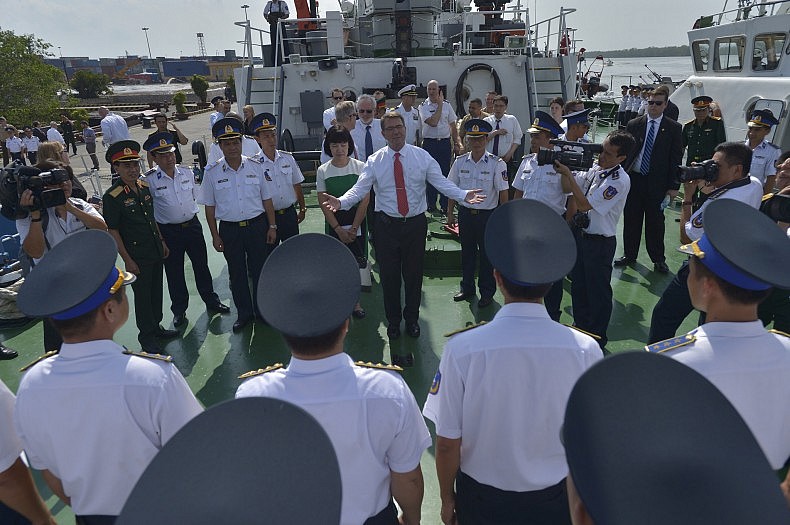 Secretary of Defense Ash Carter tours the Vietnam Coast Guard ship CSB-8003, in Hai Phong, Vietnam, May 31 2015. Carter is on an 11 day trip to the Asia-Pacific to meet with partner nations and affirm U.S. commitment to the region.

However, despite the United States’ recent overtures toward Hanoi on military technology, a few factors inhibit a major surge in Vietnam purchasing technology from the United States. As a result of the 40-year embargo, Vietnam has built almost all of its military around Russian systems. It’s ongoing adoption of improved Russian Kilo-class submarines highlights this. Adding U.S. technology into this mix may be inadvisable for Hanoi, particularly given the higher cost of most U.S. systems compared to their competing Russian counterparts. For Vietnam, like other budget constrained states, purchasing older-generation used equipment from the U.S. may be one option.

Secondly, selling arms to Vietnam is far from a politically anodyne topic in the United States. Some, like U.S. Senator John McCain, are in favor of lifting the arms embargo and permitting the sale of lethal arms to Vietnam. Meanwhile, many in the U.S. remain critical of Vietnam’s troublesome record on human rights, arguing that the United States ought to use arms sales as an incentive for Vietnam to change its ways at home (Human Rights Watch’s John Sifton outlined the difficulties in The Diplomat some months ago).

The Vietnamese government has rejected this idea, noting that the U.S. shouldn’t link arms sales to rights issues. Defense Minister Phung Quang Thanh, during a press conference with Carter, noted that the decision to lift the embargo would be “in line with the interests of both countries. And I think we should not attach that decision to the human rights issue.”

The optics of the U.S. defense secretary’s visit and the announcement of U.S. assistance for Vietnam are particularly pronounced given that Carter traveled to Vietnam shortly after speaking out against China’s land reclamation activities in the South China Sea at the Shangri-La Dialogue in Singapore. In his Singapore speech, Carter rejected the validity of China’s claims that it had a right to construct facilities and man-made islands in disputed areas of the South China Sea. The United States’ ongoing convergence with Vietnam is part of the country’s rebalance to Asia–a broader strategic and military readjustment toward Asia.

Vietnam, meanwhile, is seeking defense partnerships both within and beyond its immediate neighborhood. A week before Carter visited Vietnam, Thanh was in New Delhi, signing a series of memorandums of understanding with his Indian counterpart. In New Delhi, Thanh received assurances that India would continue to support Vietnam’s maritime security interests. Over a month ago, reports emerged that Vietnam was purchasing anti-ship missiles and other equipment from Russia.

Shangri-La 2015: Why We Didn't See a US-China Showdown

Both sides exercised restraint, at least for now. But lots of uncertainties lay ahead.

Is a Sino-US War Inevitable?

How to stop the unthinkable from becoming the inevitable.

Right and Wrong on the South China Sea

“Right and wrong” is not as important as the obligation of states to the peaceful settlement of disputes.

Russia and China will hold a naval exercise in the South China Sea next year.