As Shannon Tiezzi noted earlier today, the Japanese Ministry of Foreign Affairs released a statement clarifying assertions made in the recently released Japanese defense white paper about China’s construction of offshore gas platforms in the East China Sea. The white paper, as Franz-Stefan Gady highlighted, focuses extensively on the threat Japan perceives from China. According to Tokyo, the work (believed to have begun in 2013) violates a 2008 bilateral agreement for joint natural resource development in the East China Sea. Japan’s choice to highlight the offshore rigs as an example of Chinese assertion—similar to China’s island-building and extensive construction work on features it occupies in the South China Sea—is an odd one.

Why is it odd? Well, let’s start by taking a look at the map that the Japanese Ministry of Foreign Affairs released in a bid to clarify the white paper. 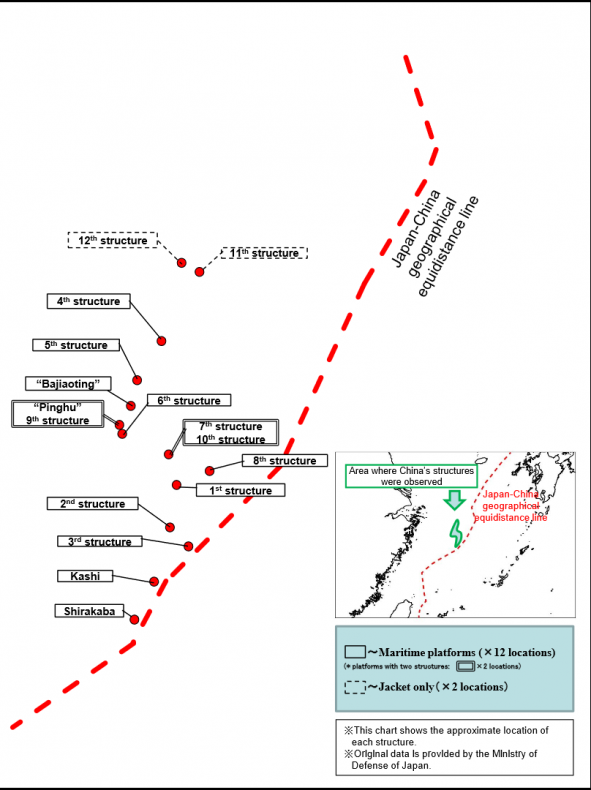 The Ministry’s statement goes on, however: “[U]nder the circumstances  pending maritime boundary delimitation, it is extremely regrettable that China is advancing unilateral development, even on the China side of the geographical equidistance line,” adding that “the Government of Japan once again strongly requests China to cease its unilateral development.”

There’s a fair criticism here which is that these platforms do indeed fall outside the geographic scope of the 2008 agreement, potentially affecting Japan’s reservoir claims (gas reservoirs extend across the line). Japan can hold that against China, but, where I think Tokyo is off the mark is in its bid to portray this as an upping of the ante in the East China Sea. Consider recent comments made about the structures by Japanese Defense Minister Gen Nakatani. He told the Japanese Diet that these platforms should be of concern to Japan because China “could deploy a radar system on the platform and use it as an operating base for helicopters or drones conducting air patrols.”

This is a bit far-fetched and an unconvincing statement of the “threat” posed here. As I noted recently, China’s East China Sea drone operations—which indeed exist—fly from the Daishan airfield, on the mainland. There would be little reason for Beijing to operationalize drone maintenance facilities on these platforms—the advantages would be marginal at best. The defense minister’s statement that China could operate military radar facilities off these platforms has more substance, but still does not pass scrutiny. As scores of reports from late-2012 to mid-2014 in The Diplomat and elsewhere noted, China regularly conducts ship-based surveillance operations in the East China Sea; gas platform-based radar facilities for military surveillance purposes would make little sense for China. Ship-based surveillance is more of a threat to the status quo in the East China Sea than these platforms on the Chinese side of the geographical equidistance line.

Ironically, the Japanese government’s decision to highlight the “threat” posed by these platforms reminds me of how China reacted when Japan declared its intention to station Self-Defense Force troops and a radar facility at Yonaguni Island, Japan’s south-westernmost island. Yonaguni is located 108 kilometers east of Taiwan and 150 kilometers south of the disputed Senkaku/Diaoyu Islands, and is incontrovertibly Japanese territory. Back then, reacting to the move, Chinese Foreign Ministry spokesperson Hua Chunying noted that “due to historical reasons, any of Japan’s military moves will raise concern among Asian countries.” She added, “Japan should give a serious explanation for its real intention of building military muscle in [the] relevant region.” Of course, in Tokyo’s eyes at the time, the move should have been uncontroversial.

I’m not too convinced that Tokyo’s decision to focus on these offshore platforms is a wise move as far emphasizing a threat from China goes. As Shannon notes, it’s probable that Tokyo is trying to recreate the transparency that won the Philippines so much international support, from governments and independent analysts alike, for its predicament vis-a-vis China in the Spratlys, but with these offshore rigs, there’s just not as much to spark outrage. I do think that it is worthwhile to raise the issue of these platforms operating outside the coordinates laid out in the 2008 bilateral agreement for natural resource development, but beyond that, this just simply isn’t anything close to the sort of assertive move that China is undertaking today in the South China Sea or a year ago in the East China Sea.

As a concluding thought, it’s curious that Japan is so keen to emphasize the East China Sea issue just when it appears that bilateral relations with China are headed for better times after a two-year freeze. Consider that the Japanese cabinet and the ruling Liberal Democratic Party refused to approve a preliminary draft of the country’s new defense white paper, citing an inadequate focus on the East China Sea gas platform issue. Worse yet, this comes as the two countries inch forward toward a finalized East China Sea crisis management framework, a stabilizing development, to be sure.

Japan’s leaders want the sort of public attention to their quarrels with China that, for instance, Vietnam and the Philippines have received. Unfortunately, Chinese gas platform development won’t be the development to do it. Having witnessed events like the November 2013 imposition of an air defense identification zone (ADIZ), a military radar lock on a Japanese vessel, and even Chinese coast guard militarization, we know there will be better opportunities for Japan to point out manifestations of China threatening the status quo.

Are Chinese Drones Heading to the East China Sea?

According to the Japan Coast Guard, Chinese vessels remained in the territorial sea around the disputed islets for 30 hours.

Observer Now, Beneficiary Later: China and the Unrest in Kazakhstan