Dimo HyunJun Kim, 24, from Seoul, Korea is the director and co-playwright of Comfort Women – A New Musical. This marks the first all-Asian off-Broadway cast to be led by an East Asian national. The musical follows several Korean women characters tricked into working at comfort stations in Indonesia. Comfort Women opened on Friday, July 31 to a sold-out audience and a standing ovation.

Remi Yamazaki spoke with Kim about his process. The following interview has been shortened and edited for clarity.

What inspired you to take up this topic? Do you have personal connections with ‘comfort women’?

My grandma told me about her aunt whose daughter was taken away. My grandma was 9 so they didn’t take her, but her cousin was 14. After that, her aunt always wore ash on her face. And my grandma used to wonder why her face was always black. But that’s not really the reason.

I came here [to the US], and I was shocked because people really don’t know. I asked them, “Do you know what ‘comfort women’ are?” And they would say, “A woman who is comfortable?” And I would say, “They’re sex slaves.” And they’d say, “So why aren’t they called sex slaves?” So, I had to do it.

My target is not Korean people. Because they already know the story. It’s like [the movie] Schindler’s List. People just get into it, and whenever they remember the melody, they keep remembering the Holocaust.

You’ve taken the huge challenge of adapting a sensitive social issue to a high-profile New York City entertainment stage. What did you have to compromise in the process?

Basically, I decided not to put any violence or torture scenes in this musical because that’s going to stop me from telling the story from a third perspective. I’m trying to avoid all possibility that people will think that Japan is the devil. I was trying to cut out all the black and white issues. Also as a subject, it’s really hard to put in comic moments, or just “up” moments. Everything is just too miserable. So that was the biggest struggle.

What would you say the musical’s political position is?

If my goal was to spread this history and to say that Japan did this and Korea was the victim, then I should just do a documentary or a movie… Even a [straight] play that focuses on the issue could send a social message. But I chose a musical because I thought, if they just get the message through the whole story without any particular focus, if they could just stay for two hours and go home humming the melody, and they’ll catch themselves and they can search about comfort women later. I’m trying to give the button. But I’m not going to be the person to press the button.

Do you feel particularly strongly about the 70th anniversary of the end of the war?

I don’t care about 70, 60, 50. It [educating] should have been done much earlier. If I were 10 years older, I could have done this 10 years before. Because this isn’t about telling people that Japanese are bad. Because look at our cast. We just decided to fix this story ourselves, nobody hates Japanese actors. And we don’t fight each other, there’s no hatred. We’re just Asian people.

I think this is a small example for the whole Asian community. If at some point, the Japanese apologize, then what are they [Korea] going to say? “But still, I’m not going to forgive you?” No, you say, “You said sorry, so let’s move forward.” And I think our cast is a small sample, a super small sample – but if these things happen on a larger scale, I think Asian society is going to get much bigger. 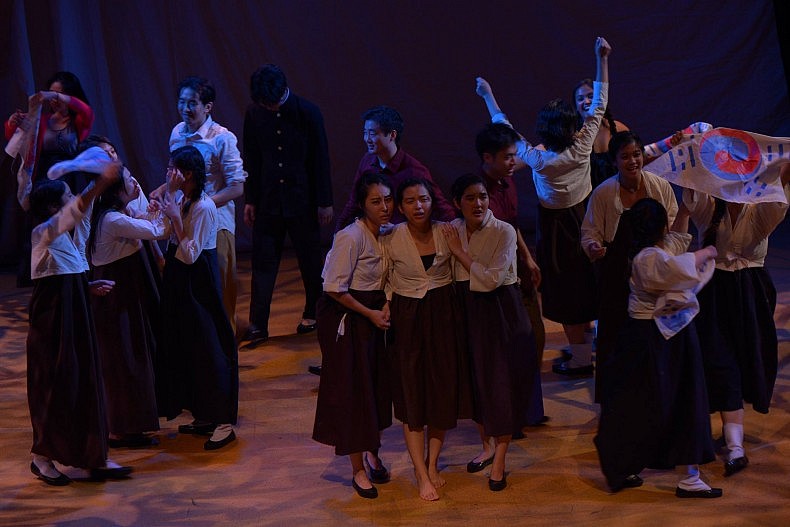 The ending image was very powerful: the three survivors huddled together, not able to join the other Koreans celebrating the end of the war.

Actually, we changed the ending after we went to perform for one of the survivors in DC. There were three comfort women organizations there, and it really pissed me off how they ordered her around… No one really cares about the victims. I think it’s kind of like a father who’s never there. Like he boasts about how much money he’s earning for the family but he’s never actually there. And he doesn’t care. They don’t care about helping the victims. They just care about the propaganda. So that’s why we changed the ending.

Remi Yamazaki is a cultural analyst, playwright, and social artist from Yokohama, Japan.

Seoul is walking away from a key part of the 2015 agreement with Tokyo, tossing the comfort women issue back into the spotlight.

South Korea Pulls Back From Sex Slave Agreement With Japan

A recent government report criticizes the agreement made under the previous Park administration.

Many recording artists struggle to cope with the trappings of fame, made more difficult by the perception of mental health as taboo topic.

After Trump Interregnum, US, Indonesia Agree to Resume ‘Strategic Dialogue’

The announcement marks a convergence of interests with the U.S., but that does not preclude strong economic ties with China.

Why are Two of India’s ‘Seven Sisters’ Shooting at Each Other?

A border dispute between Assam and Mizoram in India’s Northeast recently erupted into violence.

Can ASEAN’s Special Envoy Resolve the Crisis in Myanmar?

Brunei’s Erywan Yusof faces an uphill struggle in bringing the country’s contending factions into a process of dialogue.

By Andreyka Natalegawa and Kyra Jasper