Satellite imagery of Subi Reef in the South China Sea taken September 3, 2015 clearly shows subgrading for a runway. At a width of approximately 60 meters, the subgrading could support a runway equal in width to that recently constructed by China at Fiery Cross Reef. The current extent of subgrading at Subi is approximately 2,200 meters, with obvious preparations for a longer span underway. As previously reported, the size and shape of China’s land fill at Subi could ultimately accommodate a runway 3,300 meters long, as well as a parallel taxiway like that at Fiery Cross. No laying of pavement is observed in the current imagery. 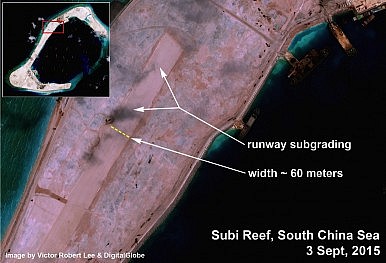 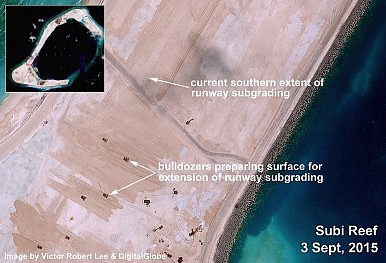 An indented segment of the north rim of the reef is being widened by extending a large retaining wall into the sea and backfilling the enclosed water area with sediment.

Three, and possibly four, dredgers with attached sediment pipes appear to be active, pumping sediment into areas already bounded by sea walls. The channel allowing ship access to the waters protected by the reef has been expanded to a width of 290 meters, from 215 meters on 13 July 2015. Elsewhere, dozens of bulldozers, cranes, trucks and tracked excavators are redistributing and compacting hundreds of acres of sand. 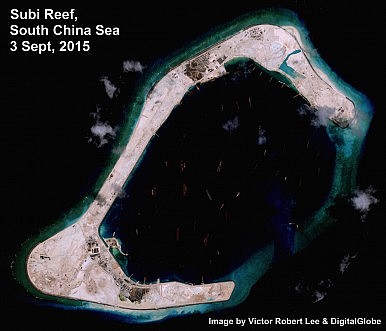 The establishment of a combat-capable air facility at Subi would be China’s third in the South China Sea, following Woody Island in the Paracels and Fiery Cross Reef in the Spratlys. As pointed out by analysts, these military facilities and others newly constructed by China in the Spratlys would increase Beijing’s capacity to enforce an air defense identification zone in the South China Sea, if it were to declare one, and will significantly improve the PLAN’s capacity for antisubmarine warfare in a region where submarine threats are particularly viable.

Note: Subi Reef is known as Zamora in Filipino, Đá Xu Bi in Vietnamese, and Zhubi Jiao (渚碧礁) in Chinese.

Did China Try Restricting US Bombers in the South China Sea?

Two U.S. bombers were contacted by Chinese air traffic controllers over the South China Sea, but details are murky.

The latest satellite pictures show China building what appears to be a large runway on Subi Reef.

Subi Reef looks next in line for an airstrip, as building and reclamation continue with unprecedented speed.