China’s People’s Liberation Army-Navy will hold military exercises in the South China Sea, with less than two weeks to go until an international court issues a ruling in the Philippines’ arbitration against Chinese maritime claims in the area.

The exercises will take place around the Paracel Islands, which China occupies, but Vietnam and Taiwan also claim. Coordinates given by the maritime security administration cover an area of approximately 106,000 square kilometers and encompass most of the Paracel Islands. The notification notes the words “Entering prohibited” in English. 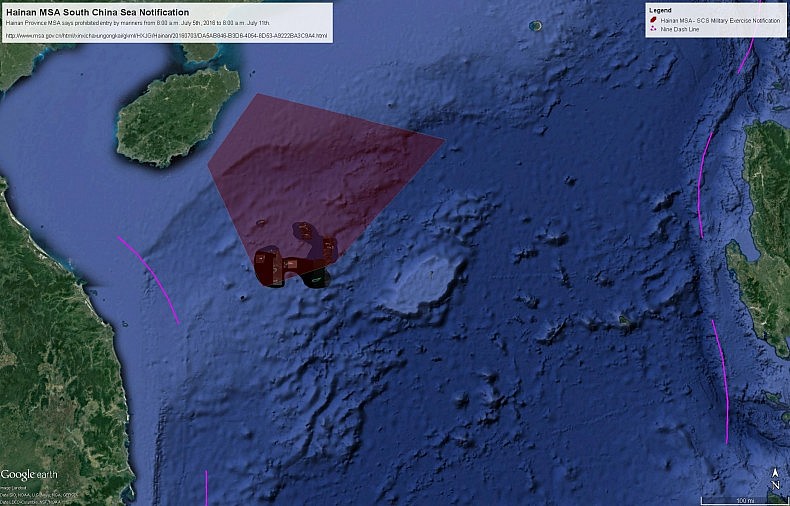 Muscle Flexing Before the Court’s Award?

The timing of the exercises, which are set to conclude the day before the PCA is expected to hand down its highly anticipated verdict, suggests that Beijing may be using them to snub the Court. China has held that it does not recognize the validity of the Philippines’ case and will not recognize the Court’s ruling as legitimate. Starting in May, Beijing started seeking diplomatic support from other states for its position that the South China Sea disputes should be peacefully resolved through negotiations between the involved the parties – not international law.

The Court’s award will not directly rule on the maritime entitlements for Chinese possessions in the Paracels as the Philippines has restricted its case to disputed features in the Spratly Islands and Scarborough Shoal. The Court may rule on the validity of China’s nine-dash line claim under international law and more broadly on Chinese maritime activities in dispute waters. (The Court’s ruling won’t address territorial sovereignty issues, which are not under the purview of the United Nations Convention on the Law of the Sea, the international treaty governing maritime entitlements.)

The choice of the Paracel Islands demonstrates some tactical consideration by China. Given that the Spratlys will be under scrutiny in the aftermath of the verdict and Chinese President Xi Jinping’s pledge last fall to avoid militarizing China’s artificial islands there, a military exercise there would have been highly provocative. The Paracel Islands are also home to Woody Island, China’s largest South China Sea possession and the most highly militarized feature in the sea by far. Woody Island features a major airstrip (China’s only one outside the two newly constructed strips at Fiery Cross and Subi Reefs in the Spratlys), some 1,000 personnel, J-11 fighter jets, anti-ship missiles, and HQ-9 surface-to-air missile systems, among other equipment.

China held combat drills in the South China Sea in early May, involving the ships of the South Sea Fleet near Hainan Province and in the Paracel and Spratly Islands.

China cites the announcement of U.S. access to Philippines bases as evidence of militarization in the South China Sea.

The framework appears to focus on general principles, with no agreement on binding rules just yet.