After nearly a year of travel through Southeast Asia, we entered the final country of our journey. Yet as we explore the regional capital of Xishuangbanna prefecture, we are acutely aware that there’s still more than 2000 km to go before reaching the Mekong’s source high on the Tibetan plateau. 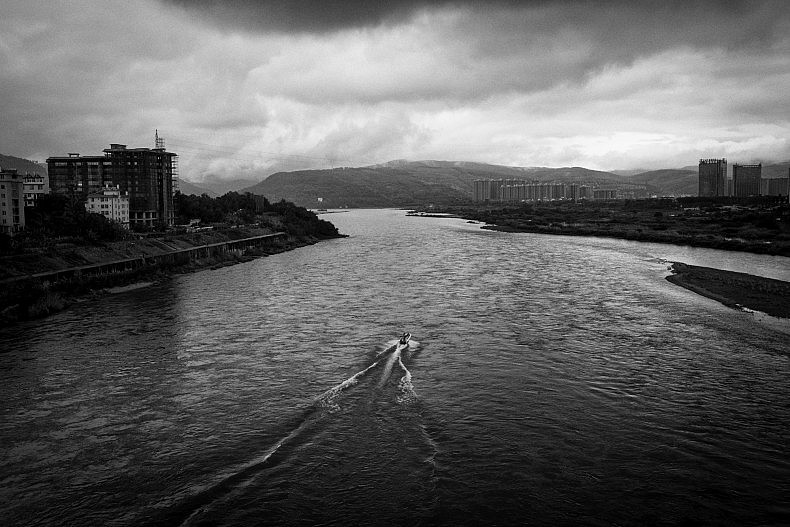 A tourist boat makes its way along the Lancang (Mekong) river in Xishuangbanna, Yunnan, China. Photo by Gareth Bright.

A cold grey drizzle greeted us as we stepped off the plane at Jinghong international airport, the capital city of the Xishuangbanna autonomous prefecture and the gateway to southwestern China. Despite a temperature of around 15 degrees Celsius (59 F), after months of tracing the Mekong river through the tropical heat of Southeast Asia, the chill bit through to our bones and we scrambled to pull jackets and scarves out of our luggage. 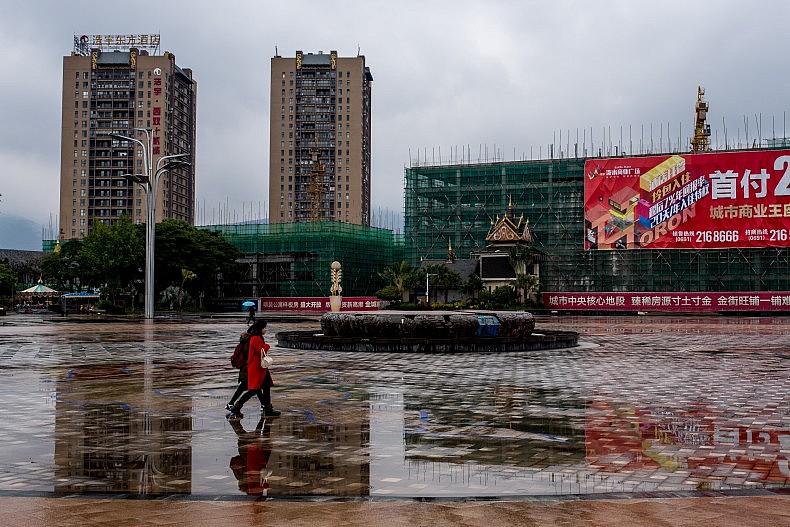 Our Mandarin speaking friend and travel companion, Yan, was waiting in the arrival hall. Possessing undergraduate and masters degrees in journalism, she was also a skilled photographer and her spoken English rivaled our own. We were in good hands.

Before long we were bundled into a car and speeding along immaculate highways into the heart of the city. Having never worked in China before, we were simultaneously exhilarated and anxious about the prospect of what was to come. 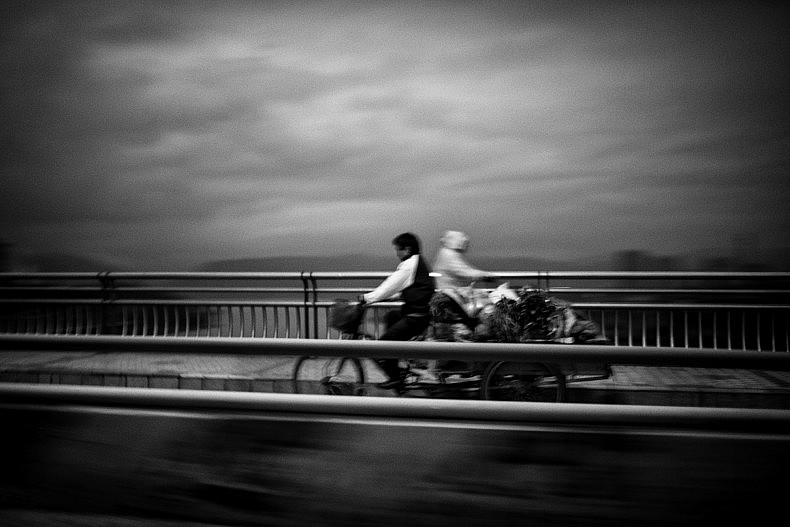 The End of the Mekong

When we got our first glimpse of the river in Jinghong, it took a moment to process the fact that we were no longer looking at the Mekong. The Lancang river, as it is called in China, was physically the same body of water we had been following for nearly a year, but the change in name signaled that we had entered into a different (and the final) phase of the journey. As we would learn over the course of our time in China, in many important ways this was a very different river to the sluggish waterway we had come to know so well. 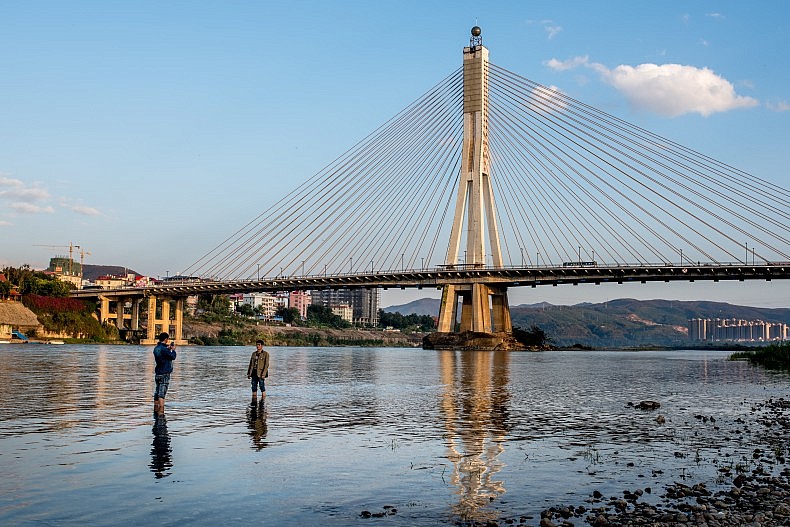 Tourists and locals gather along the Lancang (Mekong) river in Xishuangbanna, China.Photo by Luc Forsyth.

From atop an impressive cable-stayed bridge that spanned the Lancang to connect the two halves of Jinghong, we stopped to watch the river pass beneath. Cargo vessels pulled in and out of a nearby port, transporting trade goods to and from Laos to the south, while huge leisure ships drifted on the currents. These floating restaurants were some of the largest ships we had yet seen on our travels, further reinforcing that China’s relationship with the river was unique. 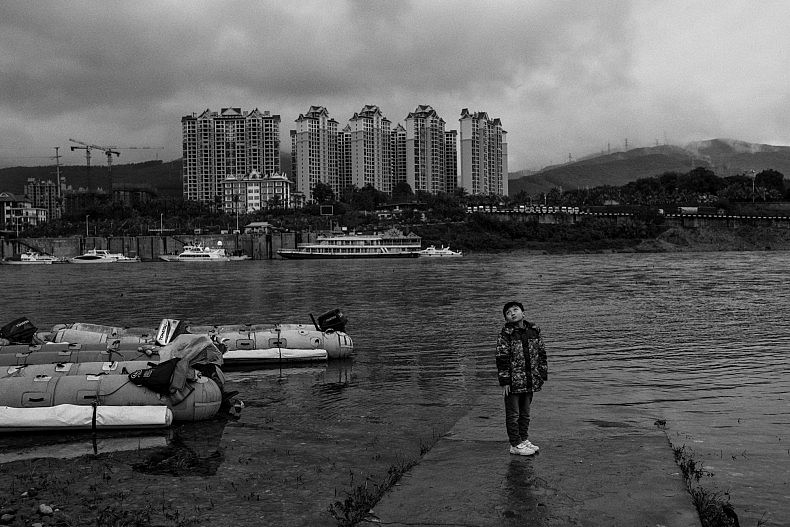 The swarms of water taxis that plied the floating markets in Vietnam were absent, and the omnipresent wooden fishing boats that dotted the river throughout Cambodia and Laos were nowhere to be seen. Even the water’s color had changed perceptibly from the murky brown of the lower Mekong basin to a more pronounced blue that flowed with surprising speed.

For the roughly 2000 km we had still to travel before reaching the river’s source on the Tibetan plateau, we would not see the Mekong again as we knew it. 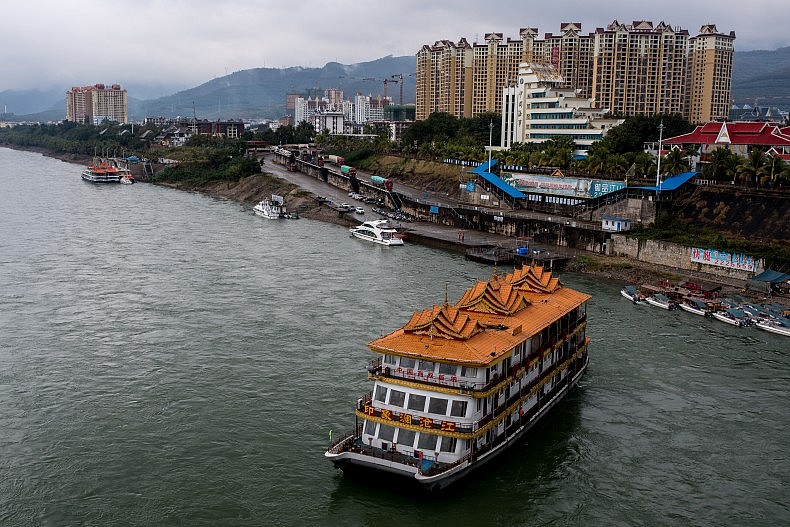 A floating restaurant and leisure ship floats down the Lancang (Mekong) in Xishuangbanna, Yunnan, China. Photo by Luc Forsyth.

As we walked along the banks of the Lancang, one thing felt familiar; the river served as a public gathering space; a place to socialize, exercise, and enjoy. 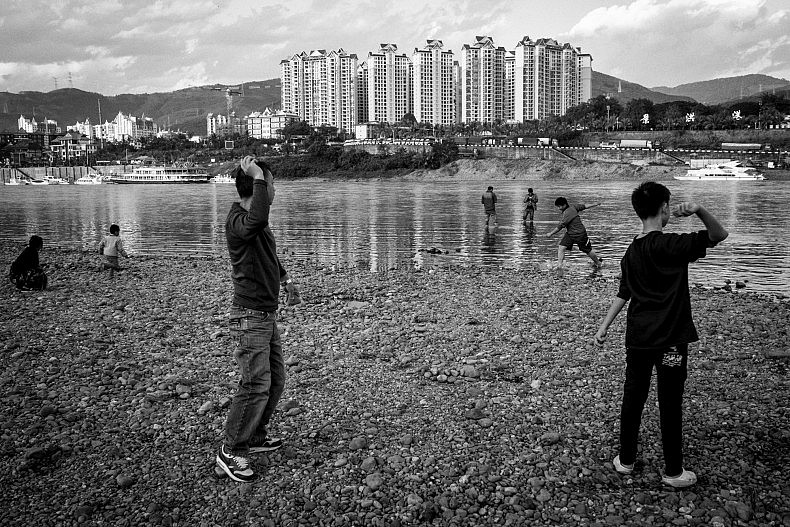 Tourists and locals gather to skips stones and play along the Lancang (Mekong) river in Xishuangbanna, Yunan, China. Photo by Gareth Bright.

Restaurants, bars, and coffee shops overlooked a well maintained stone pathway, which in turn overlooked small communal farm plots that locals used, rent free, to grow vegetables and bananas. Joggers made use of the long, straight track, and more than a few times we noticed people walking backwards at full speed – a practice said to have originated in ancient China – which while supposedly being very effective at targeting seldom used muscles, was nearly impossible to watch with a straight face. 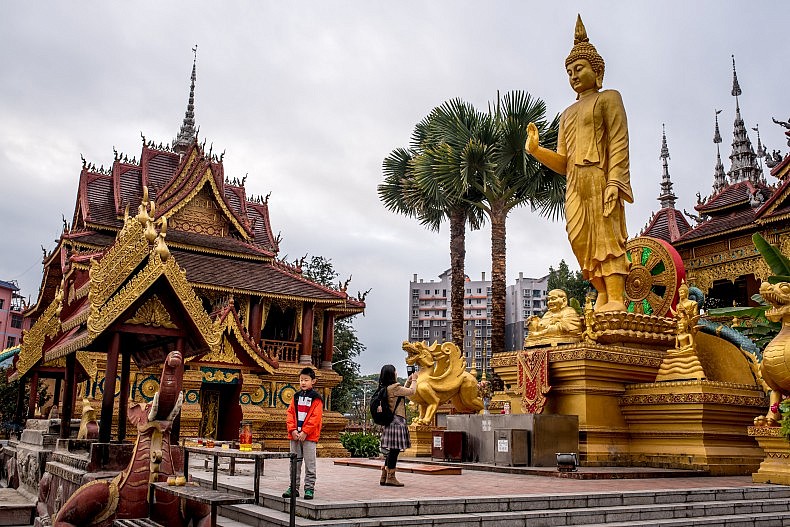 Xishuangbanna, China–with sites like this large Buddhist temple–is a popular desitnation for Chinese vacationers, but there were few foreign tourists. Photo by Luc Forsyth.

Further along we left the water’s edge, lured to a small park by the sound of birdsong. Dozens of small cages hung from the trees that lined the public space and were inhabited each by a solitary huamei – a small Chinese thrush-sized bird most similar to a North American robin, but made distinctive by its spectacle-shaped eye markings. Groups of men stood in clusters, appreciating the birds according to some criteria that we did not understand, smoking furiously as they listened to their song. While the birds were certainly beautiful and the cages perfectly crafted from painted wood, seeing the jittery imprisoned animals gave us little joy. 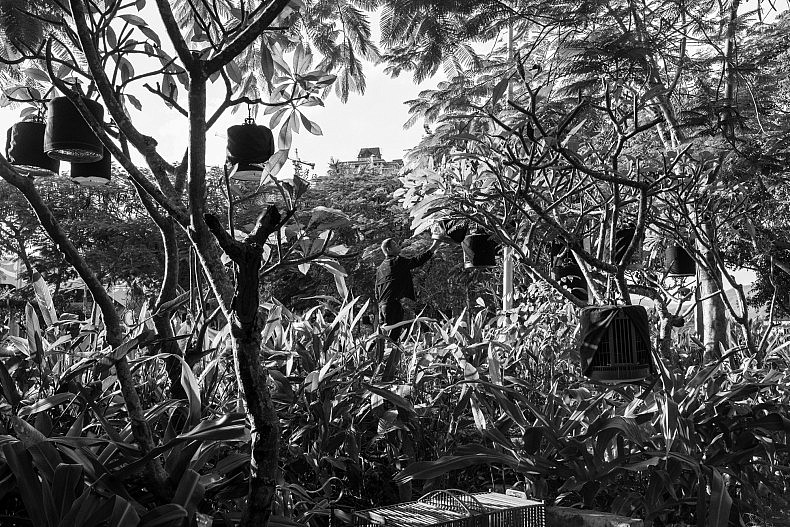 Men gather to smoke tobacco and look at singing birds in a public park in Xishuangbanna, China. Photo by Gareth Bright. 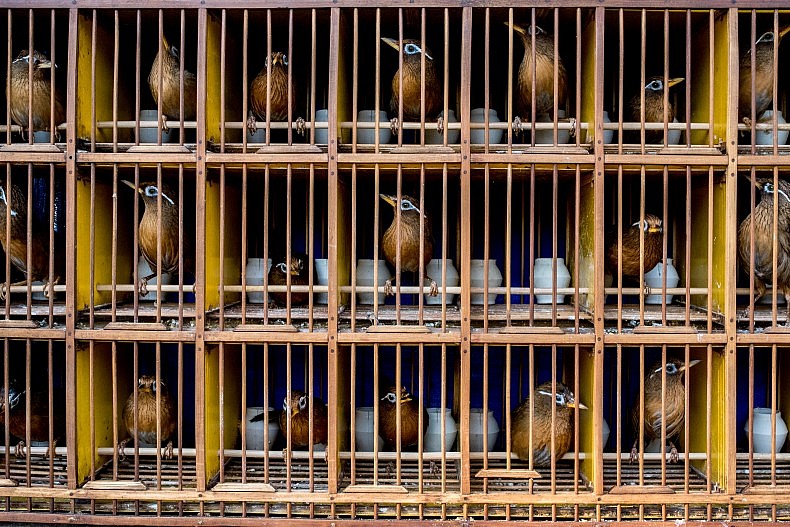 Caged songbirds in a public park in Xishuangbanna, China. Photo by Luc Forsyth.

It wasn’t long before we started to attract considerable attention. Though Xishuangbanna was a popular destination for Chinese tourists, we hadn’t yet seen another foreign visitor, and the locals seemed excited to chat. Before we knew what was happening we were drawn into a group of men who asked us standard questions–where did we come from? How did we like China?–before thrusting large bamboo water pipes into our hands. 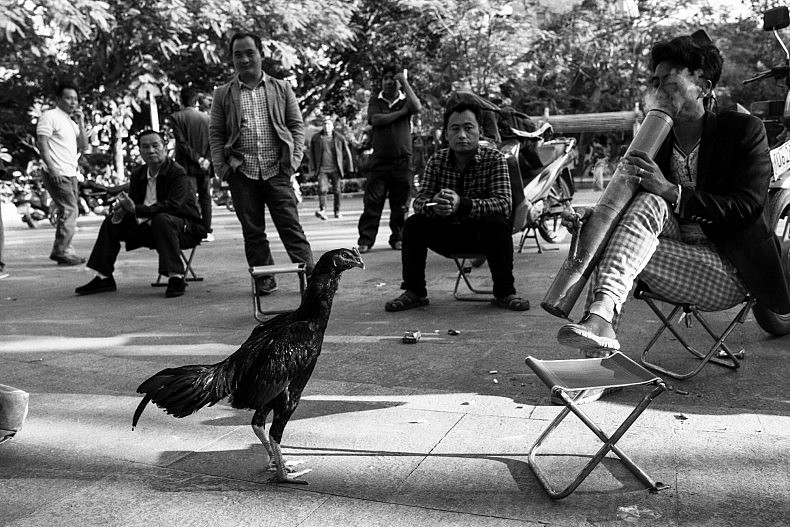 A man smokes tobacco from a water pipe in a public park in Xishuangbanna, China. Photo by Gareth Bright.

A cigarette was wedged into a small spout at the base of the pipe, and with much effort and a massive amount of lung power we were encouraged to haul repeatedly on the tube until we were coughing out great clouds of smoke. Though not unbearable, the experience was by no means pleasant, and made all the more difficult by the fact that our unshaven faces made it impossible to form a tight seal around the mouth of the pipe. After we each finished an entire cigarette in this fashion, lightheaded and dizzy, the men immediately tried to restart the process. Only by distracting them with our cameras did we manage to escape additional rounds. 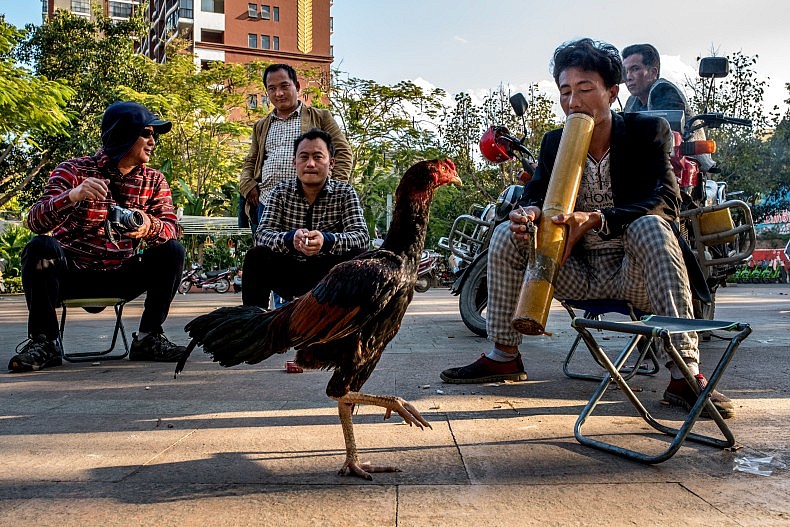 Fleeing to a nearby stone pier that extended a hundred meters into the Lancang, we noticed a pair of men emerging from the river. Though the air temperature was chilly by our standards, the water was nearly freezing, and we approached the men to compliment them on their toughness. “This isn’t cold,” one of them said proudly. “Where I come from [north of Beijing], it is much colder than this.” Wearing nothing but a skimpy bathing suit, he rolled a cigarette from loose tobacco he said he’d brought from his home province. Bundled as we were in thick fleece and thermal under layers, we felt decidedly un-tough. 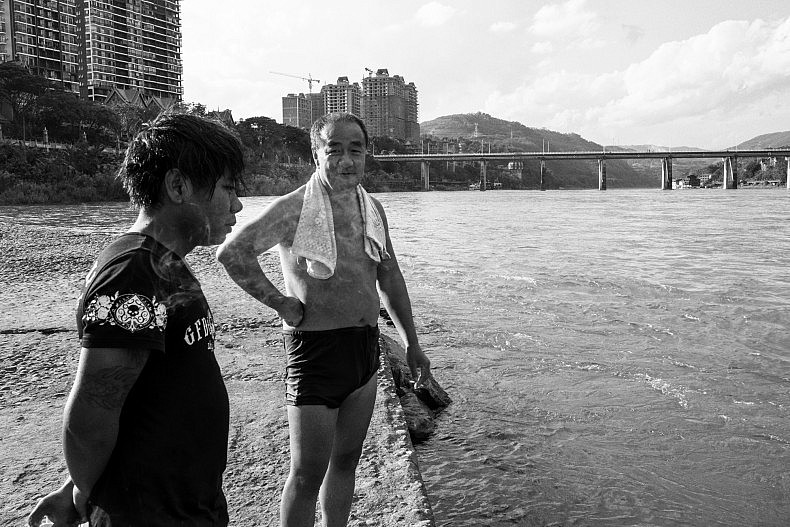 Two locals stand on a jetty that extends into the river, after swimming in the Lancang (Mekong) river in Xishuangbanna, China. Photo by Gareth Bright.

As the sun set we made our way to a stony beach where people were gathering to enjoy the evening light. Some waded into the water to take selfies, while others played with their children or talked on the phone. 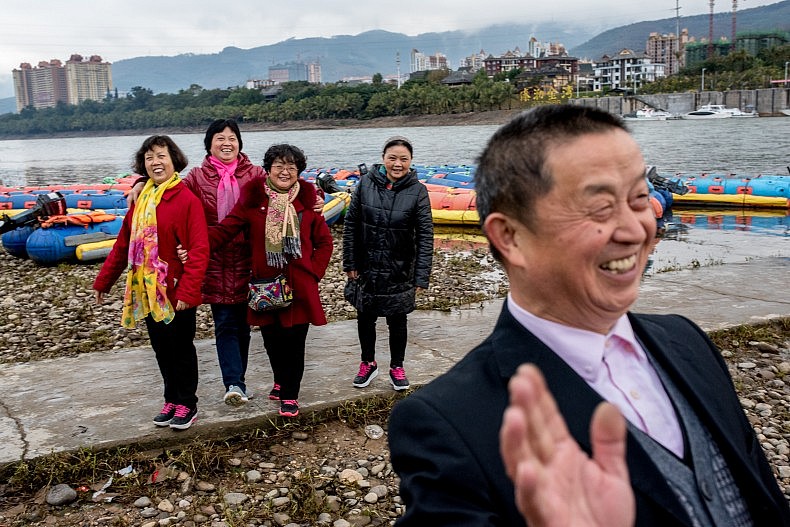 One particularly friendly group of tourists who were skipping stones across the Lancang shouted an enthusiastic ni hao (hello) and beckoned us over. Once again we were reminded that temperature was relative: “We’ve been here for more than one month. We come here for the warmth and to get away from winter!” 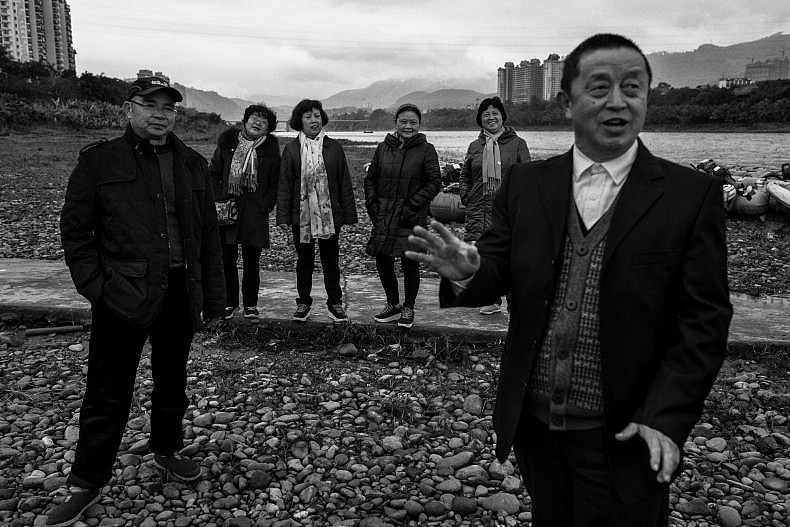 Groups of tourists gather for pictures along the Lancang (Mekong) river in Xishuangbanna, Yunnan, China. Photo by Gareth Bright.

While we had left the Mekong behind to start our journey up the Lancang, in one way at least China was consistent with the other countries we had traveled through – be it known as the Mekong or Lancang, fast flowing or slow, blue or brown, the river attracted people. Regardless of name or geography, people were drawn to its banks. 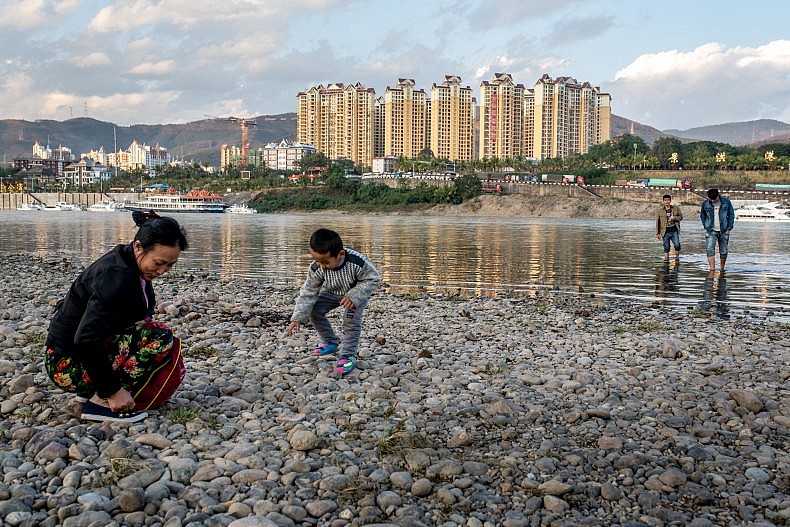 Whether it is called the Lancang or the Mekong, the river brings people to its banks. Photo by Luc Forsyth.

In northern Yunnan, the future of multiple rural villages are under threat from hydropower dams along the Lancang.

Dams and the Rise of Lancang River Fishing

In Jinggu county, the construction of dams on the Lancang have created a recent fishing boom, though it may not last.

Pu’er Tea: Worth Its Weight in Silver

In Yunnan, the city of Pu’er is renowned for producing some of the country’s most prestigious and expensive tea.

Bananas on the Lancang: Grown in Yunnan, Destined for Shanxi

Along the banks of the Lancang in Yunnan, bananas grown from the river’s water are part of a complex network of national trade.