Leaving the Lancang temporarily, we head to the city of Pu’er to learn about Yunnan’s booming tea industry — and whether or not those employed to pick it share in the great wealth generated by the crop. 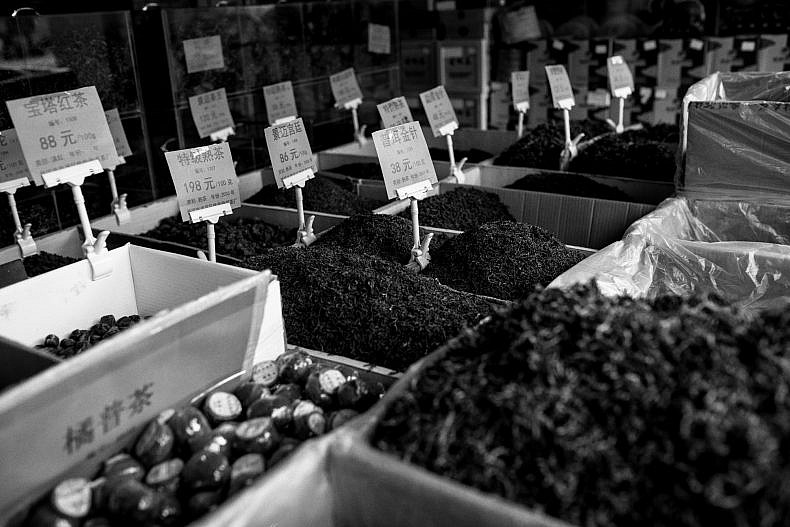 Teas for sale in Pu’er. Photo by Gareth Bright.

“If you bought this in the store, it would cost you hundreds of dollars,” Luo Jie said as he poured out small cups of steaming Pu’er tea. “It has been aged for more than 10 years, and it is some of the most expensive in the world.”

A thin, soft-spoken 40-year-old veteran tea picker, Luo had invited us into his home at the base of Pu’er’s rolling hills where some of China’s most prized tea is grown. With premium varieties of regional tea being worth more than their weight in silver, the fact that Luo was refilling glass after glass of the stuff was an act of generosity not lost on us. The tea was so valuable that armed citizen militias have built checkpoints in certain key areas to police its movement. 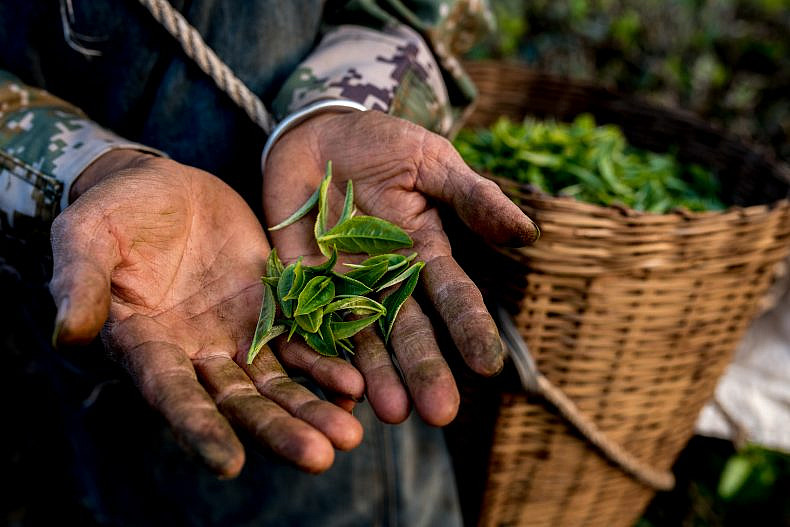 But we had not come to Pu’er to buy (or steal, for that matter) tea. We had come only to observe, deviating from the Lancang for a few days to learn how one of the world’s most popular teas was produced. 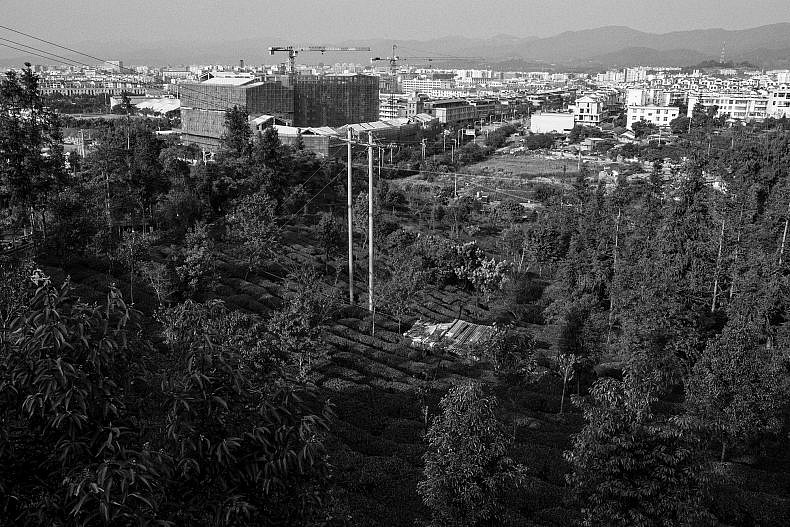 Pu’er tea, which comes from the areas around Pu’er city, is some of the most sought after and expensive tea in the world, with the best varieties being worth more than their weight in silver. Photo by Gareth Bright.

The Rise of Pu’er

“Pu’er has changed so much,” Luo said, constantly monitoring our tea cups and refilling them whenever they were less than half full. “The buildings used to be small and simple, but now there are high-rises everywhere. But in all that time, the process of picking tea has not changed.” 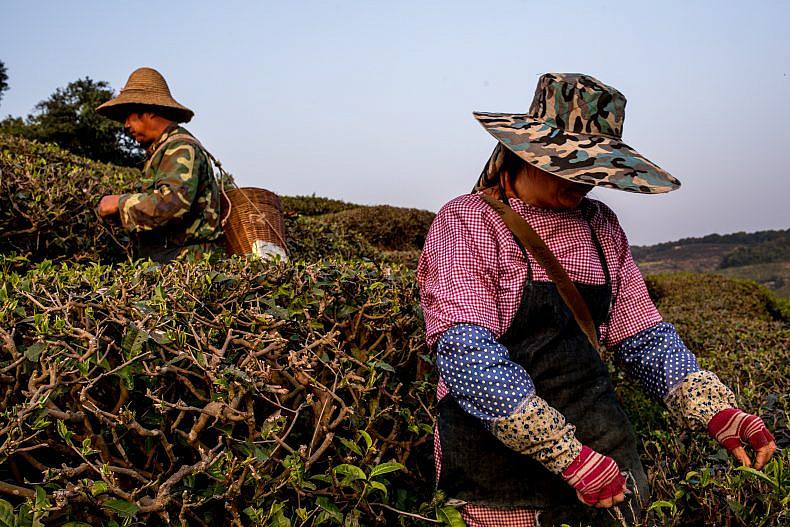 Luo’s home, provided by the tea company he worked for, was a modest concrete structure and one of many in a long rows of identical units that housed a variety of tea workers, from pickers to packers. While not squalid by any means, it was clear from looking around Luo’s home that tea picking was not a particularly lucrative profession.

Yet over the course of the hour we spent talking with him, he offered us nearly every conceivable consumable item he possessed — chilled coconut water, fried pork, cigarettes, sunflower seeds, and, of course, tea — with a hospitality bordering on obsessiveness. 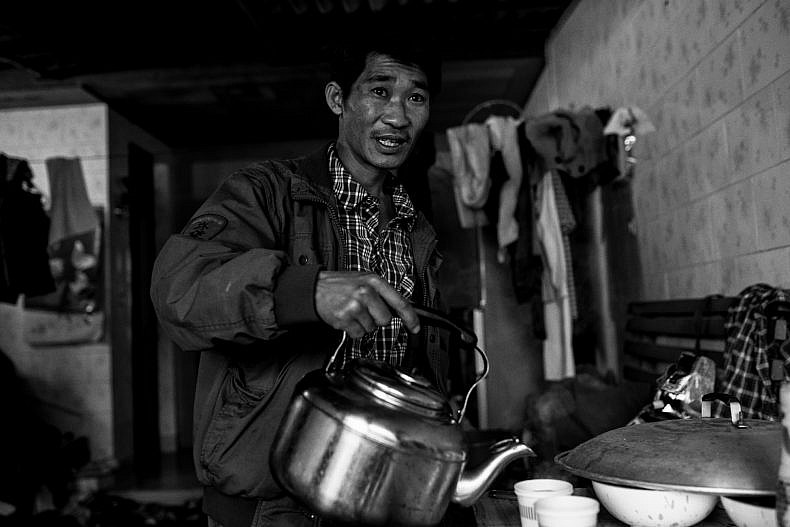 Pu’er tea pickers in their home. Photo by Gareth Bright.

“Because I’ve been working here so long [the company] allows me to take time off to go work another job so I have enough money,” Luo said. After spending for most of his youth as a construction worker in Laos and Myanmar, he returned to China and the tea plantations 10 years ago, and has been picking ever since. Despite his seniority, however, his salary was just 1,000 yuan (roughly $150) per month — a meager sum with which to support a family in the increasingly expensive economy of modern China. He and his wife (also a tea picker) had to work second jobs in order to provide for their children. “My children are teenagers, so they need money. Teenagers always need money.” 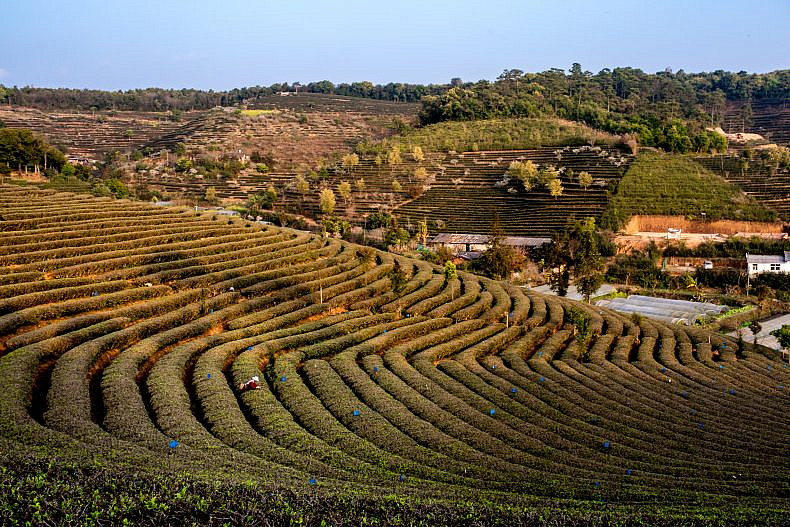 If Luo felt any sense of moral outrage about having to work multiple jobs despite the huge value of the crop he picked, he did not express it. Instead he refilled our glasses, and continued to offer us any and every edible item on hand.

Away from the plantations, in the heart of Pu’er city, the Cha Yuan (tea source) market was mostly empty, with the majority of customers having left the city in the days leading up to the lunar new year. Despite this relative quiet, the booming business conducted around the buying and selling of tea was still apparent. 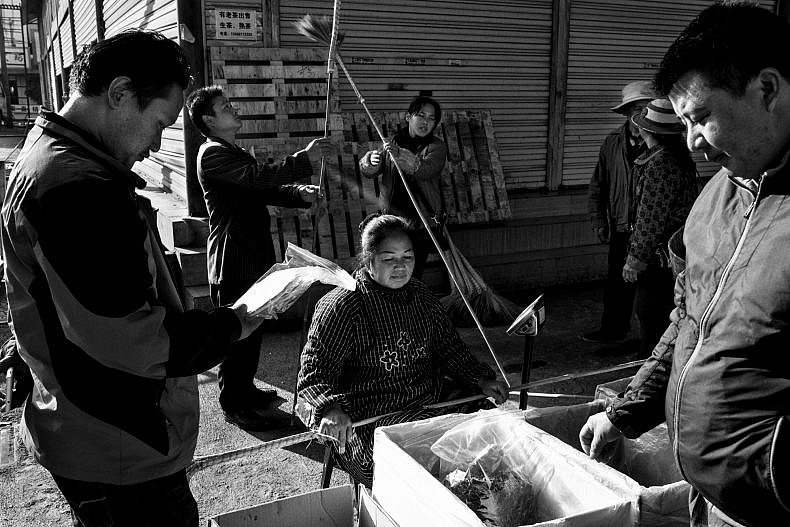 Small-scale vendors sat in the open air displaying plastic sacks filled with loose-leaf teas of varying quality. The most expensive tea, however, was sold in larger shops that ringed the market, packaged imperiously in velvet-lined boxes and commanding prices into the thousands of dollars depending on the age of the leaves. Three grams of tea dating back to the Qing dynasty reportedly sold at auction for around $30 000. 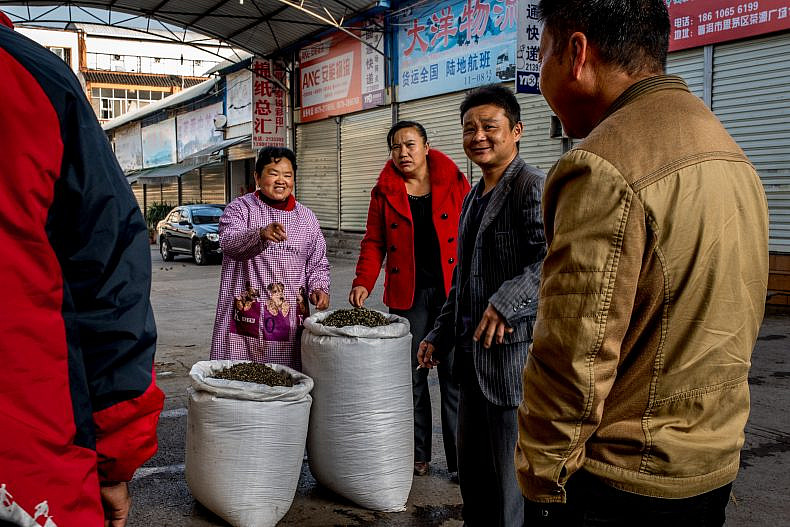 Customers talk with a vendor in the Pu’er tea market. Photo by Luc Forsyth.

All manner of accessories were also on sale. Entire warehouses were devoted to the selling of tables, presumably intended for tea services, from small ornate squares that were just tall enough to sit cross-legged around, to enormous five meter long varnished slabs of wood hewn from the trunk of a single tree. Delicate porcelain tea pots, decorated with intricate brush work, stood on display stands, clashing strangely with counterfeit Nike-branded kettles.

In Pu’er, tea meant money for those who knew how to capitalize on it. 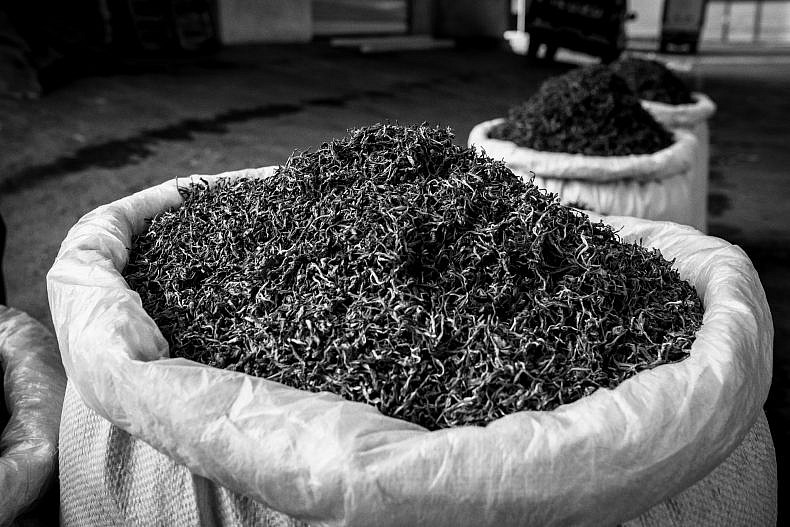 There was no denying the scenic beauty of Pu’er’s tea plantations. Whether grown in India, Sri Lanka, China, or Japan, the best teas only flourish at high altitude. Though perhaps not as spectacular as some of these tea growing regions–such as the mountainous foothills of the Himalayas in Darjeeling, India–Pu’er’s rolling green hills lined with orderly rows of tea bushes were quiet and peaceful, bathed as they were in warm evening light. 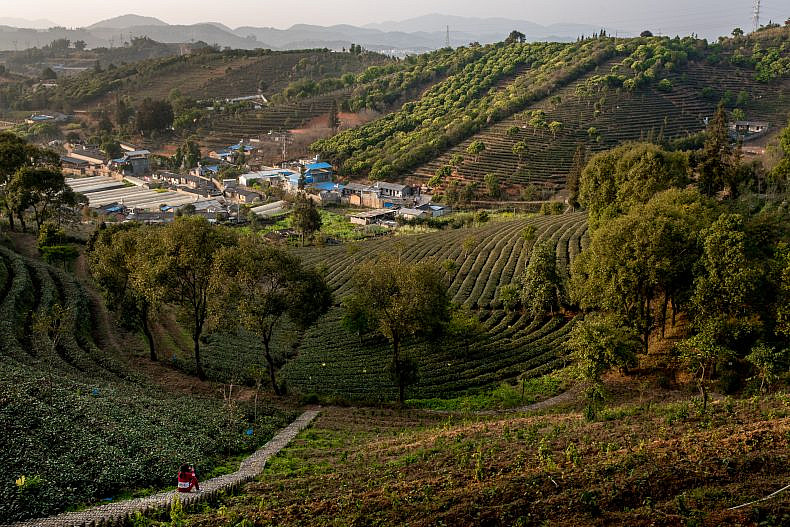 Small groups of pickers moved between the rows, woven baskets slung across their backs that they filled with one handful of tea leaves at a time. They chatted and joked as they worked; like Luo Jie they exhibited no signs of discontentment at the hard labor they were required to perform in exchange for nominal pay. There was work to be done year round, they told us, and only in December did the picking stop for a month when the bushes needed to be trimmed. The rows were weeded and pruned constantly to ensure that the maximum amount of nutrients reached the vibrant green leaves. 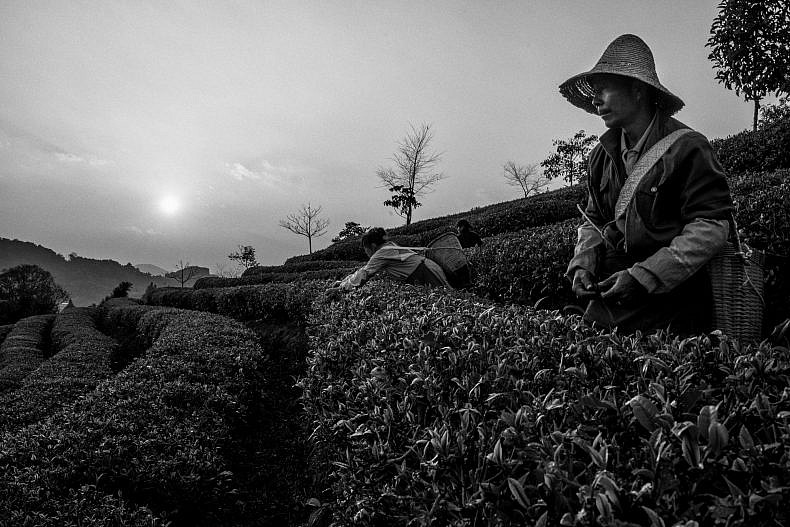 Despite being almost 100 km from the main channel of the Lancang, Pu’er was still connected to the river. The Simao river flowed along the western edge of the city, which linked to the Pu’er river to the north, which in turn connected to the Xiaohei river, which was a tributary of the Lancang. But as we spoke to the pickers, trying to establish a connection between the Lancang and the world-famous tea, we learned that the hardy plants did not need much help from rivers to survive.

“Only young plants need irrigation,” 56-year-old tea picker Li Guangfu told us. Resplendent in a spectacular fur hat, Li had been working in the tea fields for more than 20 years. When he first moved to Pu’er there were only two types of tea grown, but now, he said, there were eight varieties — none of which needed much help in the way of water. “We pipe in water from an underground reservoir for the young plants during the dry season [in February and March], but the old plants are fine without it. We get enough rainfall here.” 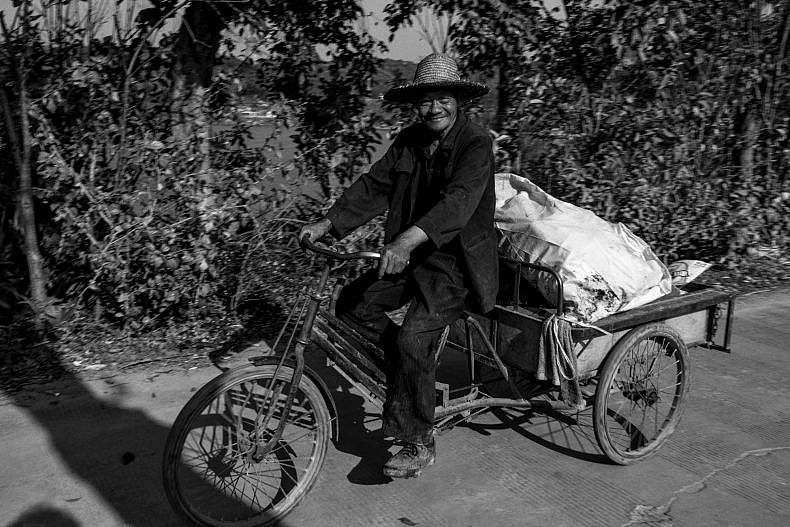 A resident of the tea picking commune rides his bicycle in Pu’er, Yunnan province, China. Photo by Gareth Bright.

The water from this reservoir was not safe for human consumption, Li said, and instead drinking water came from mountain springs, pure enough to be drunk directly from the tap. But the freshness of the mountain water didn’t matter to him, Li said with a grin.

In northern Yunnan, the future of multiple rural villages are under threat from hydropower dams along the Lancang.

Dams and the Rise of Lancang River Fishing

In Jinggu county, the construction of dams on the Lancang have created a recent fishing boom, though it may not last.

Entering China: Where the Mekong Ends

In Jinghong, the gateway to southwestern China, the Mekong ends and the Lancang river begins.