A member of Bangkok’s crime fiction literati, an established author, and an old Bangkok hand, James Newman most recently sees himself in the role of producer. Crazy Medicine, a short film directed by up-and-comer Richie Moore, has been garnering several awards over the past few months, and Newman’s expertise in the seediness of the Sukhumvit no doubt added to the success of the film. The short film centers the naiveté of a young, idealistic journalist trying to get to the bottom of a drug craze. But, Bangkok is not what it looks like on a college newspaper, and the protagonist falls down a deep rabbit hole indeed.

The film has been getting some decent recognition of late — New York Film Awards, London Indie Film Awards, etc. Are you happy with the feedback?

Indeed, the awards have been enjoyable mostly for the cast and crew who deserve the recognition for the graft they put into the project. Crazy Medicine has also been well received locally with three or four screenings to date and another set for October in Bangkok’s Live Lounge. Like Yaba the drug, Crazy Medicine, the picture, seems both terribly commercial and sensationally addictive. I hasten to disclaim I have no personal experience with yaba or methamphetamine (owing more to being asthmatic and of nervous disposition rather than the possession of any real moral backbone) but it is interesting to note that the trade seems to flourish in the world’s most poverty stricken regions. Economy slumps, society degrades, and the meth labs thrive. Crazy Medicine is a straightforward little fairytale based on the concept of Dark Tourism. British media graduate Emily Davidson arrives in Thailand to film an expose of the city’s seedier side and see firsthand the drug they call yaba or crazy medicine. Emily, played by Libby Jennings, hits downtown Bangkok to uncover the city’s dark side, but, as we all know, the city can be a cruel beast, and visitors are not always mentally equipped to unscramble the mysterious behavioral codes and ethics encountered here in Bangkok. The most terrible mistakes we make in life are often based on a preconception that we are wiser than those around us — this is perhaps the most basic human error — thinking we got this. Lots of westerners who feel their education renders them superior can find themselves on a sticky wicket here.

Where did the idea for this film begin? How long did it take to come to fruition?

Novelist, screenwriter and Vortex Films co-founder Matt Carrell was in town last October — we began shooting the following March, and finished post production in May this year. So from concept to final edit took around six months. The idea came from one of Matt’s short stories of the same name, and the script was in hand a few weeks after we agreed to produce the film. Once I hooked up with director Richie Moore and editor and fellow filmmaker Jesse Maddox the magic began to happen. Spike N’ Stein’s Voodoo Asylum industrial music inspired the Bangkok as a Meat-Grinder concept — a place where Westerners get sucked in, chewed up, and spat out — a concept that had been written about by myself and others in novels over the years yet hadn’t to my knowledge been adequately expressed in narrative film. The soundscape adds a required grittiness to the picture — I love the dark carnival sound of the track when the credits roll down. We were blessed with an excellent ensemble cast: Kate Tiger, May Weiss, Chris Wegoda, John Marengo, Libby Jennings, Michael New, Jonathan Samson, Jesse Maddox, Roseanne, Pearly, Mark Brooks, and I even played the voice part of a Thai policeman, and yes, my Thai accent is terrible.

Do you run into any difficulties shooting in Bangkok?

We shot 40 scenes in 11 or 12 locations with a large cast — a big ask for a short film with a very modest budget. Richie was as solid as bronze fending off attacks from street-walking transsexuals in the Nana district of town and tackling landlords mistaking us budding auteurs for rain-coated pornographers. We were lucky to have the support of Joe Delaney at The Black Pagoda where much of the film was shot. Indeed some of the picture’s best cinematography is from inside the Pagoda. Smoke machines, fans, lights, authentic extras, all those little Richie Moore touches render gorgeous scenes — great color, texture, lighting. Much of the problem-solving took place in post-production, Jesse and Pearly shone brilliantly helping out with editing, voice tracks, and all the little touches that made the picture real during the final mix at Best Studios. 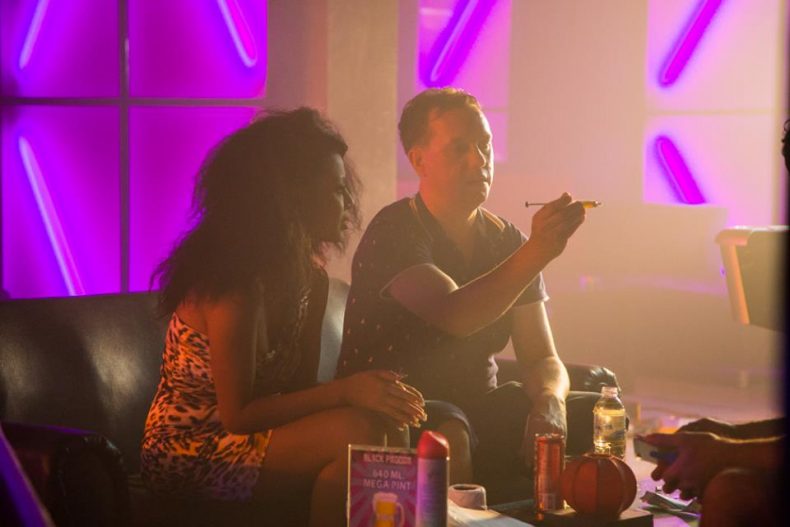 Some might be more familiar with your work in dark crime fiction. Considering the theme of Crazy Medicine, is this something Bangkok in particular lends itself to?

Yes, crime writing is my bag, and really, I’m kind of a film imposter – yet surprisingly, I did study film production at college. I landed in Bangkok at the age of 24 and remained in and around the town writing dark crime fiction throughout my 20s and 30s. Bangkok has all a writer or filmmaker of dark crime requires thematically. The tools are there, it is just a matter of picking them up and whittling away. I spent months in cheap hotels writing dark stories and to this day I am happiest checking into a dive hotel and writing secretly in the hotel lobby or perhaps at a window with a street view. Bangkok was lot darker then, the city has modernized considerably which in a way is tragic; but generally I prefer the international feel of the place nowadays, though I am fearful of the technological advances we are seeing. I created a fictional town called Fun City some five years ago and my last novel is set amongst a paranoid brave new world of high tech surveillance, emancipated dwarves, and amputee demigods. Bangkok changes rapidly and I like to be involved in new art forms that challenge my resources — Crazy Medicine was thus a project tailor-made to my new direction. The collaboration aspect of film is to be admired by novelists, like myself, who tend to get a little antisocial and terribly introspective, and given half the chance would rather stay at home with the blinds drawn down gently pondering life while languidly stroking a pet gazelle with a silk-gloved hand.

The journo in this piece is particularly idealistic — hardly a gritty detective trope. What are viewers meant to take away from her yaba hunt?

The message could be simply — Don’t do it. In an early test audience one of those present suggested Crazy Medicine could be used by the Tourist Board as a deterrent for tourists considering trafficking drugs. Emily is an idealist, she falls for the wrong guy, and she gets punished for that. Carrell shines best in his stories when he puts the reader in a place where they can clearly see characters digging themselves into an impossible situation. The audience should be positioned slightly above, be smarter than, the characters in a work of fiction. You have to lift the audience up before putting them in their place, and Matt does this brilliantly in his books and screenplays. The deeper the hole becomes the more engrossed we are. All great dramatic art from the days of Shakespeare and Greek tragedy can be judged by the screams from the balcony. Crazy Medicine is a thrilling short film — we want to scream at Emily “Don’t do it!” The film also taps into a certain type of gallows humor that is terrifically popular in my native UK where pedestrian reality shows such as Banged up Abroad flourish.

A previous piece with Jon DeHart introduced us to your Joe Dylan series. Any chance of seeing a short-film indie standalone?

Yes. I think it will happen eventually. The third in the Joe Dylan series The White Flamingo had been optioned for a full length feature back in 2014. The filmmaker flew over and we hung out, I wrote the script during the daytime and we scouted locations during the evenings. After a couple of weeks we had the general concept down. The option renewed in 2016. But there are other pans are on the stove. I’d worked on the adaptation of Wisdom’s Maw — the MKUltra 1960s epic 200-page screenplay with Todd Brendan Fahey in tandem to producing Crazy Medicine, and that project has now being looked at by the heaviest players in Hollywood. I’m in co-development of another horror movie set here in Thailand, and of course the Crazy Medicine franchise which may become a feature film or a series in the not so distant future depending on which way the wind blows. The Crazy Medicine concept is wonderfully commercial, and the audience keenly anticipating the next step. You can check out the trailer for Crazy Medicine. And your readers can download a free copy of a Joe Dylan book. Thanks for talking with me, Tyler. It has been a blast.

The Sleuth on the Sukhumvit: 25 Years of Noir Fiction With Christopher G. Moore

An interview with American artist Chris Coles on his watercolor visions of Bangkok’s seedy side.

The chaos that has enveloped Myanmar since the military takeover has been a gift to the country's drug trafficking syndicates.

Yaba: The Red Pills and the Rohingya

Bangladesh’s cities are awash with red methamphetamine pills that come in from Myanmar.