Asia’s ‘Quad’ is back for the first time since 2007. Senior officials from the United States, Japan, India, and Australia met in Manila on Saturday—on the sidelines of the Association of Southeast Asian Nations and East Asia Summits—to discuss regional and global cooperation. The initiative represents the realization of an old idea, first championed by Japanese Prime Minister Shinzo Abe during his first one-year term as prime minister from 2006 to 2007.

While this quadrilateral grouping had first met in 2007, it was unable to sustain momentum as China expressed concerns about what it saw as an attempt at containment by like-minded democracies in the Asia-Pacific. The meeting in Manila on Saturday was primarily the result of renewed interest in Tokyo and reciprocal interest in New Delhi, Canberra, and Washington, with the Japanese delegation chairing the first meeting.

Saturday’s meeting took place at the “working level” with senior officials from all sides participating. It will still be some time before the ‘Quad’ meets at the ministerial or leaders level, but the Manila meeting offers insight into its presumptive direction.

Convened around the theme of a “free and open Indo-Pacific,” the first quadrilateral meeting addressed seven core themes: the rules-based order in Asia, freedom of navigation and overflight in the maritime commons, respect for international law, enhancing connectivity, maritime security, the North Korean threat and nonproliferation, and terrorism.

The statements, however, were far from identical and a close reading reveals varying priorities within the quadrilateral. The Australian and the U.S. statements touched on all seven of the issues highlighted above under the aegis of a “free and open Indo-Pacific.” Japan’s statement omitted any mention of enhancing “connectivity,” which, for India and the United States, has come to mean offering an alternative vision to China’s ambitious Belt and Road Initiative. (U.S. Secretary of State Rex Tillerson’s speech in October and India’s May statement on the Belt and Road Forum make this much clear.) 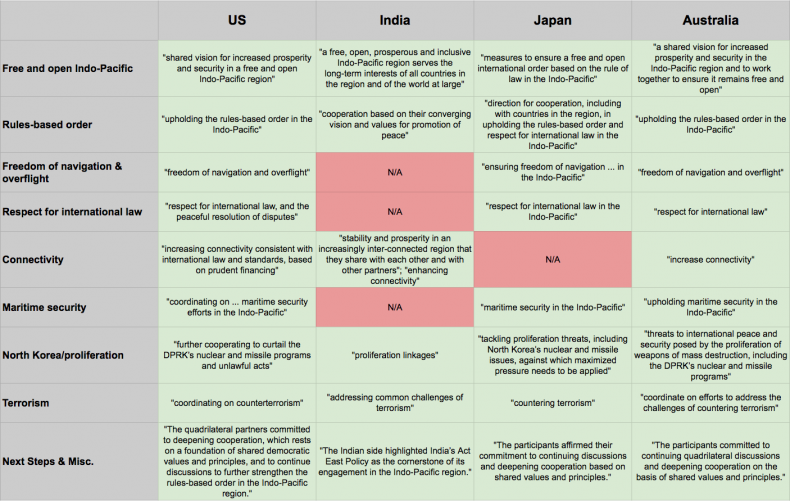 Meanwhile, India’s statement on Saturday’s meeting omitted any explicit reference to freedom of navigation and overflight, respect for international law, and maritime security. Delhi has however, in various bilateral statements and declarations with each of the other quadrilateral participants, voiced support for these principles.

Both the Indian and Japanese omissions aren’t a statement of disinterest, but rather intended to assuage concerns in Beijing that the reconvened quadrilateral will explicitly attempt to contain China. Just as “connectivity” references speak to an alternative vision to the Belt and Road Initiative, so does freedom of navigation underline a divergent set of interests for the quadrilateral in the South China Sea, for example, where Chinese territorial irredentism is a cause of concern.

The varying points of emphasis in the four statements out of the first meeting are also telling. For India, the reconvening of the quadrilateral is an opportunity for four like-minded states to foster a “a free, open, prosperous and inclusive Indo-Pacific region.” New Delhi’s statement particularly emphasizes a vision for regional connectivity for the quadrilateral “based on their converging vision and values for promotion of peace, stability and prosperity in an increasingly inter-connected region that they share with each other and with other partners.” Given the Indian statement’s omissions, it would appear that the primary value-add of the reconvened quadrilateral for New Delhi is its potential as a countervailing force to Beijing’s Belt and Road push.

Meanwhile, in addition to being the most comprehensive, the Australian and U.S. statements are the only two of the four to use the word “quadrilateral” explicitly. Reading the four statements, it’s easy to sense that while the Indian and Japanese statements were prepared with somewhat more deference to Chinese sensitivities, the U.S. and Australian statements, in their comprehensiveness, had fewer qualms. In the case of the United States, this could foreshadow a more confrontational approach toward China more broadly, but this remains unclear after U.S. President Donald Trump’s recent visit to Beijing.

For Japanese Prime Minister Shinzo Abe, the reconvened quadrilateral with like-minded Indo-Pacific democracies is an opportunity to erect a significant bulwark against Chinese attempts to rewrite the rules of Asia’s regional security and economic architecture. While Abe’s vision might have been premature in 2006, it might finally stick in 2017. India and Australia are enthusiastic and with fewer hesitations this time. The United States, while somewhat strategically adrift and running on “autopilot” in Asia, remains a wildcard for now.

Either way, succeeding in the sustainment of a “free and open Indo-Pacific” will require much work and coordination among these four countries. This is especially true if they hope to offer smaller states in the region an attractive set of reasons to value the status quo regional architecture and a rules-based order compared to China’s competing vision.

Why Has Australia Shifted Back to the Quad?

Among other things, the Quad gives Australia an opportunity to expand on its underdeveloped relationship with India.

The 'Quad' continues to progress and its members have shown interest in meeting regularly.

India and the ‘Quad’: Forging an Innovative Approach

India needs to be innovative in dealing with challenges and leveraging opportunities that arrangements like the Quad present.

The statement takes aim at China without mentioning it by name.